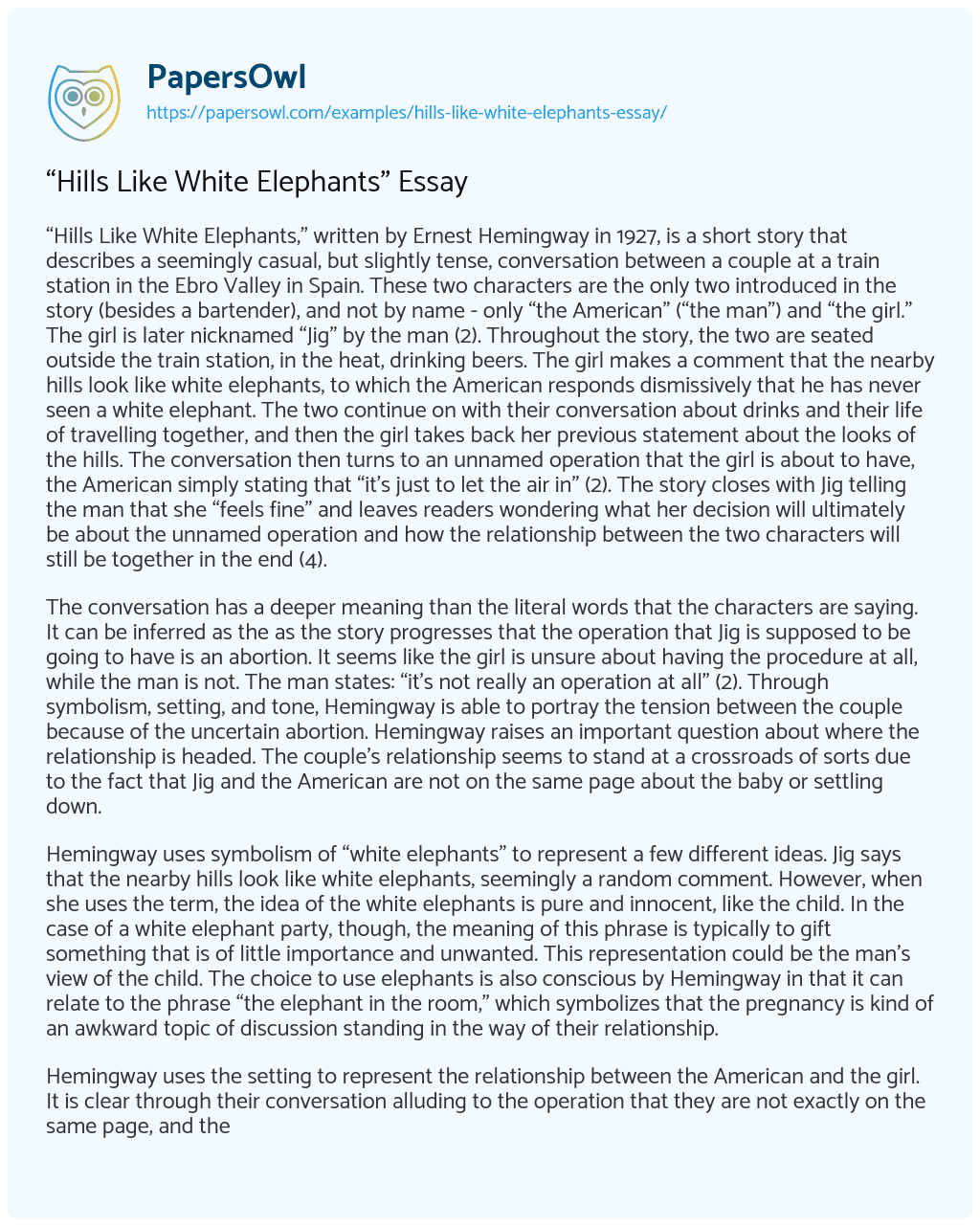 “Hills Like White Elephants,” written by Ernest Hemingway in 1927, is a short story that describes a seemingly casual, but slightly tense, conversation between a couple at a train station in the Ebro Valley in Spain. These two characters are the only two introduced in the story (besides a bartender), and not by name – only “the American” (“the man”) and “the girl.” The girl is later nicknamed “Jig” by the man (2). Throughout the story, the two are seated outside the train station, in the heat, drinking beers. The girl makes a comment that the nearby hills look like white elephants, to which the American responds dismissively that he has never seen a white elephant. The two continue on with their conversation about drinks and their life of travelling together, and then the girl takes back her previous statement about the looks of the hills. The conversation then turns to an unnamed operation that the girl is about to have, the American simply stating that “it’s just to let the air in” (2). The story closes with Jig telling the man that she “feels fine” and leaves readers wondering what her decision will ultimately be about the unnamed operation and how the relationship between the two characters will still be together in the end (4).

The conversation has a deeper meaning than the literal words that the characters are saying. It can be inferred as the as the story progresses that the operation that Jig is supposed to be going to have is an abortion. It seems like the girl is unsure about having the procedure at all, while the man is not. The man states: “it’s not really an operation at all” (2). Through symbolism, setting, and tone, Hemingway is able to portray the tension between the couple because of the uncertain abortion. Hemingway raises an important question about where the relationship is headed. The couple’s relationship seems to stand at a crossroads of sorts due to the fact that Jig and the American are not on the same page about the baby or settling down.

Hemingway uses symbolism of “white elephants” to represent a few different ideas. Jig says that the nearby hills look like white elephants, seemingly a random comment. However, when she uses the term, the idea of the white elephants is pure and innocent, like the child. In the case of a white elephant party, though, the meaning of this phrase is typically to gift something that is of little importance and unwanted. This representation could be the man’s view of the child. The choice to use elephants is also conscious by Hemingway in that it can relate to the phrase “the elephant in the room,” which symbolizes that the pregnancy is kind of an awkward topic of discussion standing in the way of their relationship.

Hemingway uses the setting to represent the relationship between the American and the girl. It is clear through their conversation alluding to the operation that they are not exactly on the same page, and the setting supports that. Jig and the man are at a train station in the middle of the desert valley, between the hills. The hills “were white in the sun” and, in contrast, “the country was brown and dry” (1). This contrast symbolizes the possibilities of the relationship’s future. The brown desert may represent the death of the child and the relationship while, the white hills represent the life of the baby and success of the relationship. The train station in this story but a point “between two lines of rails in the sun” – two possibilities (1). This further enforces the question of where the relationship is headed. The American makes it clear that he wants to keep doing things the way they have been, saying “we’ll be fine afterwards. Just like we were before” (2). However, Jig does not seem to want that. Earlier on she says, somewhat sarcastically, “that’s all we do, isn’t it – look at things and try new drinks?” implying that she is not necessarily happy with their lifestyle and wants to settle down (2).

The tone of this conversation between these two is clear through the manipulative language used by the man and the response Jig has to the conversation. The serious and tense tone of the conversation contributes further to the overall question of the relationship and its future success. The conversation topic is clearly of seriousness, and the fact that the characters are drinking in the shade shows that they are trying to ease the tension of their situation. There is small talk at first, and awkward silences, and then finally the man tells Jig that he thinks the baby “is the only thing that’s made [them] unhappy” (2). Jig asks the man if he would “please stop talking” (3). The fact that they cannot more easily communicate and work through the tension is further evidence that there are problems within their relationship. As the story comes to an end, there is the sense that Jig has shut down to having a conversation about the operation, just stating she “feels fine” (4). This indicates that she does not want to talk anymore.

Through these elements of symbolism, setting, and tone, it is easy for Hemingway’s audience to see that there are problems within the relationship between Jig and the American. This story calls into question whether or not the American and Jig will stay together as a couple, regardless of if the abortion takes place or not. David Wyche from North Carolina State University expresses a common view, stating that “critics who foresee abortion, and those who do not, tend to agree that Jig and the American will not long remain a couple” (57). Jig clearly wants to settle down and is considering having the baby, while the American seems to like the nomadic way of life and would like it to continue in that way. A key piece of evidence for this theme of questioning the relationship within the story comes when Jig asks, “then what will we do afterwards?” (2). Wyche is very sure: “whatever the outcome of the negotiations we have witnessed, the relationship is terminated, and the allegorical abortion has taken place not in an operating room,” but between Jig and the American (63).

“Hills Like White Elephants” Essay. (2021, May 10). Retrieved from https://papersowl.com/examples/hills-like-white-elephants-essay/