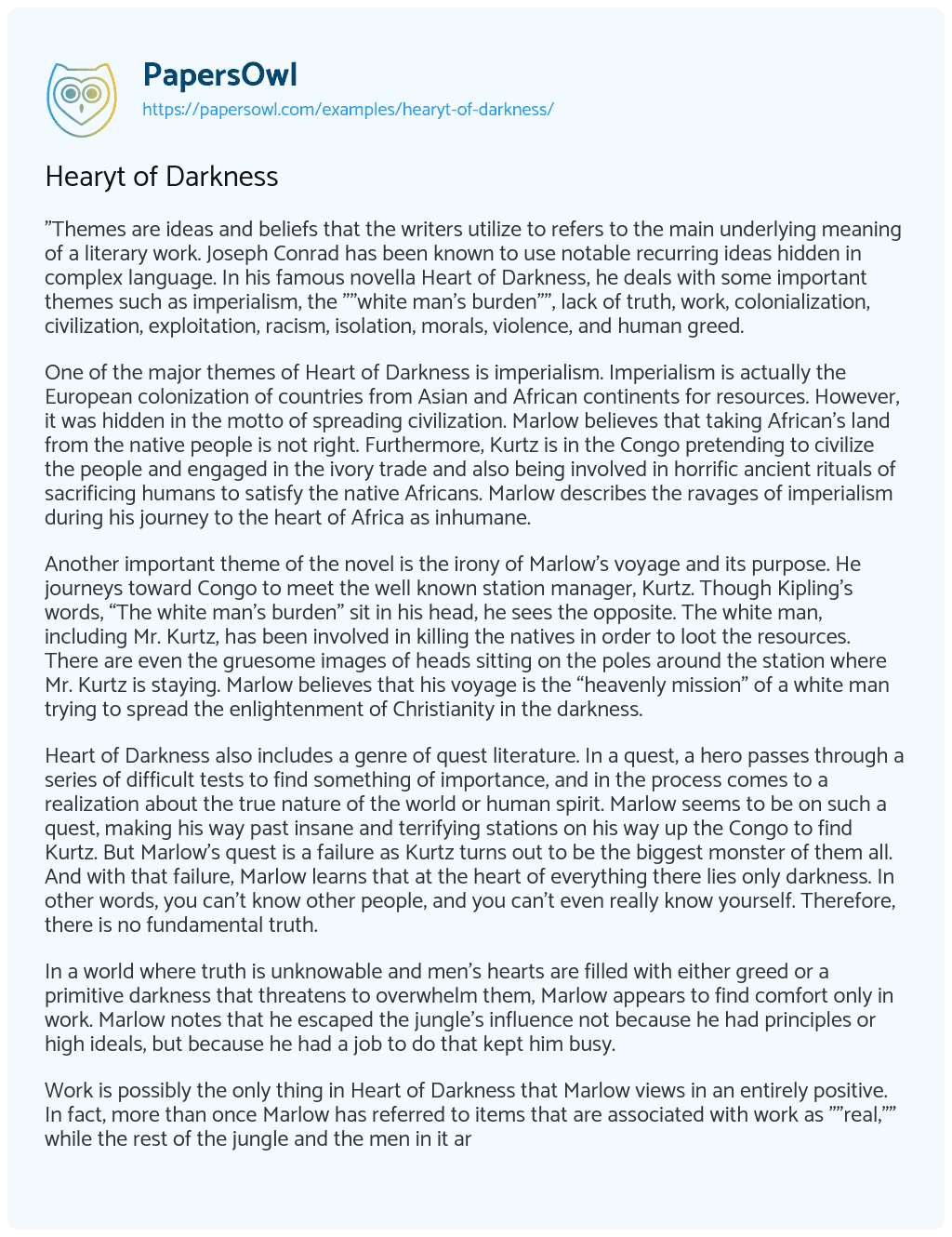 “Themes are ideas and beliefs that the writers utilize to refers to the main underlying meaning of a literary work. Joseph Conrad has been known to use notable recurring ideas hidden in complex language. In his famous novella Heart of Darkness, he deals with some important themes such as imperialism, the “”white man’s burden””, lack of truth, work, colonialization, civilization, exploitation, racism, isolation, morals, violence, and human greed.

One of the major themes of Heart of Darkness is imperialism. Imperialism is actually the European colonization of countries from Asian and African continents for resources. However, it was hidden in the motto of spreading civilization. Marlow believes that taking African’s land from the native people is not right. Furthermore, Kurtz is in the Congo pretending to civilize the people and engaged in the ivory trade and also being involved in horrific ancient rituals of sacrificing humans to satisfy the native Africans. Marlow describes the ravages of imperialism during his journey to the heart of Africa as inhumane.

Another important theme of the novel is the irony of Marlow’s voyage and its purpose. He journeys toward Congo to meet the well known station manager, Kurtz. Though Kipling’s words, “The white man’s burden” sit in his head, he sees the opposite. The white man, including Mr. Kurtz, has been involved in killing the natives in order to loot the resources. There are even the gruesome images of heads sitting on the poles around the station where Mr. Kurtz is staying. Marlow believes that his voyage is the “heavenly mission” of a white man trying to spread the enlightenment of Christianity in the darkness.

Heart of Darkness also includes a genre of quest literature. In a quest, a hero passes through a series of difficult tests to find something of importance, and in the process comes to a realization about the true nature of the world or human spirit. Marlow seems to be on such a quest, making his way past insane and terrifying stations on his way up the Congo to find Kurtz. But Marlow’s quest is a failure as Kurtz turns out to be the biggest monster of them all. And with that failure, Marlow learns that at the heart of everything there lies only darkness. In other words, you can’t know other people, and you can’t even really know yourself. Therefore, there is no fundamental truth.

In a world where truth is unknowable and men’s hearts are filled with either greed or a primitive darkness that threatens to overwhelm them, Marlow appears to find comfort only in work. Marlow notes that he escaped the jungle’s influence not because he had principles or high ideals, but because he had a job to do that kept him busy.

Work is possibly the only thing in Heart of Darkness that Marlow views in an entirely positive. In fact, more than once Marlow has referred to items that are associated with work as “”real,”” while the rest of the jungle and the men in it are “”unreal.”” Work is like a religion to him, a source of support to which he can cling to in order to keep his humanity. This explains why he is so horrified when he sees laziness, poor work, or machines left out to rust. When other men fail to do honest work, Marlow knows they have sunk either into the heart of darkness or the hollow greed of civilization.

Heart of Darkness depicts a European civilization that is hopelessly and madly corrupt. The novella depicts European society as hollow at the core. For example, Marlow describes the white men he meets in Africa, from the General Manager to Kurtz, as empty; and refers to the unnamed European city as the “”sepulchral city””, sepulcher meaning a hollow tomb.

Throughout the novella, Marlow argues that what Europeans call civilization is ignorant, and a mask created by fear of the law and public shame that hides a dark heart, just as a beautiful bright sepulcher hides a decaying dead body inside. Marlow also argues that in the African jungle, the civilized man is dumped into a world without any restrictions, and the natural desire for power comes to control him.

It is inner strength that could allow a person to push off the temptation to dominate, but civilization actually reduces this inner strength by making people think it’s unnecessary. The civilized man believes he’s civilized all the way to the core. So when a man like Kurtz suddenly finds himself in the solitude of the jungle and hears the whisperings of his dark impulses, he is unable to combat them and therefore becomes a monster.

The story in Heart of Darkness takes place in the Belgian Congo, the most infamous European colony in Africa because of the Belgian colonizers’ enormous greed and brutal treatment of the native people. In its depiction of the abnormal wastefulness and casual cruelty of the colonial agents toward the African natives, Joseph Conrad reveals the utter hypocrisy of the entire colonial effort.

In Europe, the colonization of Africa was justified on the grounds that not only would it bring wealth to Europe, but that it would also civilize and educate the “”savage”” African natives. Heart of Darkness also shows that in practice the European colonizers used the high ideals of colonization as a cover to allow them to viciously steal whatever wealth they could from Africa.

Unlike most novels that focus on the evils of colonialism, Heart of Darkness pays more attention to the damage that colonization does to the souls of white colonizers than it does to the physical death and destruction unleashed on the black natives. Though this focus on the white colonizers makes the novella somewhat biased, it does allow Heart of Darkness to extend its criticism of colonialism all the way back to its corrupt source, the “”civilization”” of Europe.

The ivory trade is the main trade throughout the Congo River. However, Marlow does not explain or accept the amount of brutal exploitation that happened as a result of the ivory trade. It is only mentioned in vague words such as “the horror” which points out the truth about the trade and the people involved. In fact, Marlow is also the part of this exploitation where locals are victimized and controlled by Kurtz. They are also encouraged to attack the people who do not agree with the main agent, Kurtz, including the attack on the steamer carrying Marlow. These attacks often cause more death and destruction to the locals than the actual targets. However, this exploitation continued even after Kurtz’ death.

Students and critics often argue about whether Heart of Darkness is a racist book. Some argue that the book depicts Europeans as superior to Africans, while others believe the novel attacks colonialism and therefore is not racist. There is evidence in the book that supports both sides of the argument, which is another way of saying that the book’s actual stance on the relationship between blacks and whites is not black and white itself.

Heart of Darkness attacks colonialism as a deeply flawed project run by corrupt and hollow white men who perform mass destruction on the native population of Africa. Therefore, Heart of Darkness argues that the Africans are less corrupt and in a sense superior to white people, but the argument for the superiority of Africans is based on a foundation of racism.

Marlow, and Heart of Darkness take the more polite view that the black natives are primitive and therefore innocent while the white colonizers are advanced and therefore corrupt. This take on colonization is in no way politically correct and can actually be called racist because it treats the natives like objects rather than as thinking people.

Moral corruption is another underlying theme of the novel, Heart of Darkness. Kurtz goes to Congo to civilize the locals, however, he becomes a top agent for the company by robbing the locals of their treasure and exporting ivory. He is engaged in corrupt practices of punishing those who oppose him and becoming their demigod. The same goes on at the other stations where Marlow sees many small agents engaged in the same practices.

There are two types of violence in Heart of Darkness; the first one is provoked cruelty. For example, Kurtz encourages the natives to attack the steamboat carrying Marlow. The second one is the violence among the natives and the heads on the sticks around Kurtz’s house. Kurtz, who claims to change the savages has actually become a savage himself. He uses violence to dominate the natives and to rob and punish them if they interfere with the white men’s business.

Marlow says that he has seen “the devil of greed, and the devil of hot desire” which refers to the ivory trade at the expense of the native Africans’ freedom and life. The European companies have been competing against each other to obtain treasures as soon as possible. Using violence, they go on a killing spree and massacre innocent people. The pieces of evidence of this human greed and deception can be seen clearly when Kurtz displays heads on the poles around his station.”