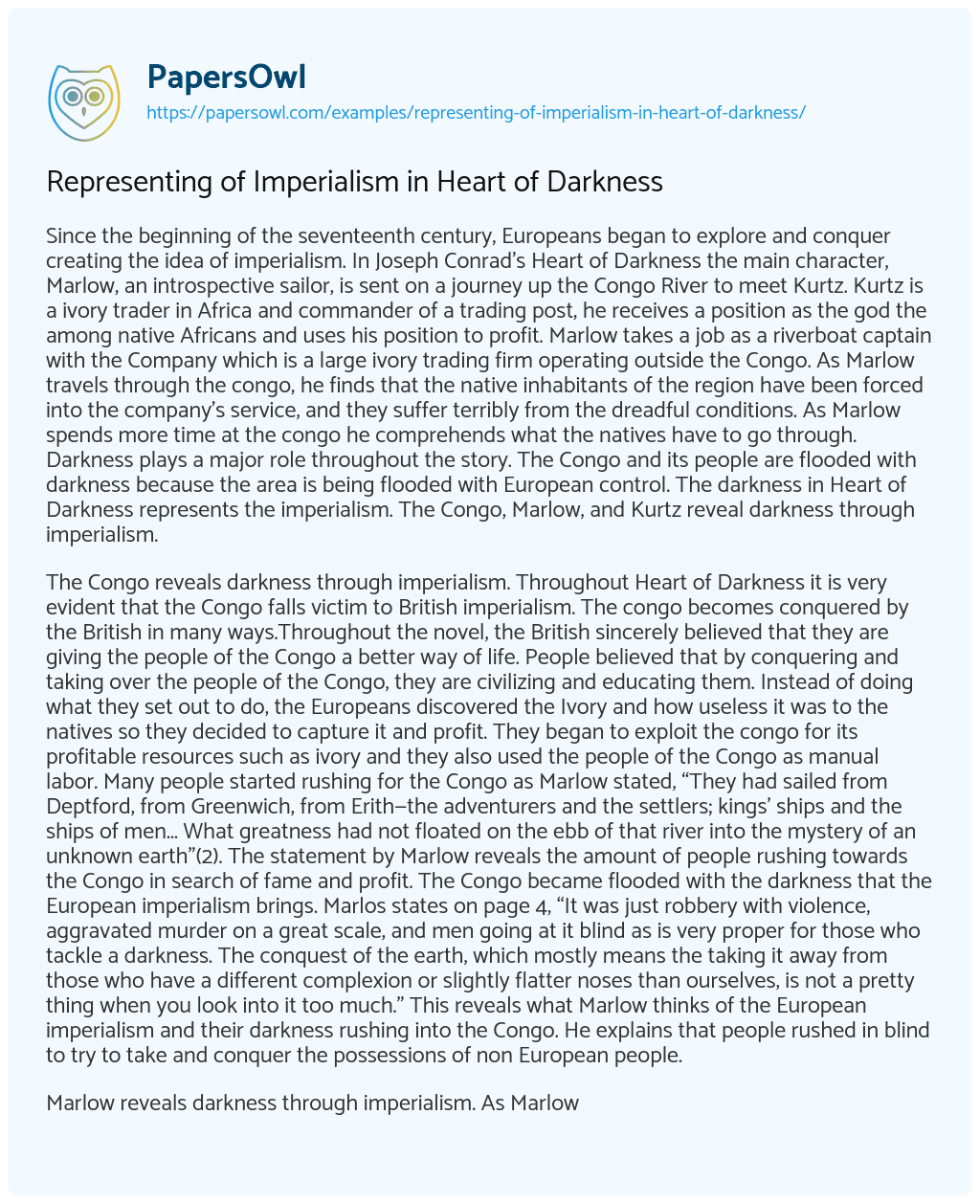 Since the beginning of the seventeenth century, Europeans began to explore and conquer creating the idea of imperialism. In Joseph Conrad’s Heart of Darkness the main character, Marlow, an introspective sailor, is sent on a journey up the Congo River to meet Kurtz. Kurtz is a ivory trader in Africa and commander of a trading post, he receives a position as the god the among native Africans and uses his position to profit. Marlow takes a job as a riverboat captain with the Company which is a large ivory trading firm operating outside the Congo. As Marlow travels through the congo, he finds that the native inhabitants of the region have been forced into the company’s service, and they suffer terribly from the dreadful conditions. As Marlow spends more time at the congo he comprehends what the natives have to go through. Darkness plays a major role throughout the story. The Congo and its people are flooded with darkness because the area is being flooded with European control. The darkness in Heart of Darkness represents the imperialism. The Congo, Marlow, and Kurtz reveal darkness through imperialism.

The Congo reveals darkness through imperialism. Throughout Heart of Darkness it is very evident that the Congo falls victim to British imperialism. The congo becomes conquered by the British in many ways.Throughout the novel, the British sincerely believed that they are giving the people of the Congo a better way of life. People believed that by conquering and taking over the people of the Congo, they are civilizing and educating them. Instead of doing what they set out to do, the Europeans discovered the Ivory and how useless it was to the natives so they decided to capture it and profit. They began to exploit the congo for its profitable resources such as ivory and they also used the people of the Congo as manual labor. Many people started rushing for the Congo as Marlow stated, “They had sailed from Deptford, from Greenwich, from Erith—the adventurers and the settlers; kings’ ships and the ships of men… What greatness had not floated on the ebb of that river into the mystery of an unknown earth”(2). The statement by Marlow reveals the amount of people rushing towards the Congo in search of fame and profit. The Congo became flooded with the darkness that the European imperialism brings. Marlos states on page 4, “It was just robbery with violence, aggravated murder on a great scale, and men going at it blind as is very proper for those who tackle a darkness. The conquest of the earth, which mostly means the taking it away from those who have a different complexion or slightly flatter noses than ourselves, is not a pretty thing when you look into it too much.” This reveals what Marlow thinks of the European imperialism and their darkness rushing into the Congo. He explains that people rushed in blind to try to take and conquer the possessions of non European people.

Marlow reveals darkness through imperialism. As Marlow travels down the Congo, he witness many events. Marlow witnesses the horrors of imperialism because he gets to experience the darkness and see what it has done. He doesn’t feel very welcome at the Congo which is revealed when he states, “In the street—I don’t know why—a queer feeling came to me that I was an imposter. Odd thing that I, who used to clear out for any part of the world at twenty-four hours’ notice, with less thought than most men give to the crossing of a street, had a moment—I won’t say of hesitation, but of startled pause, before this commonplace affair”(10). While Marlow was walking on the street he felt like an importer who shouldn’t be there. Marlow is also exposed to much of the violent tactics that the Europeans use against the people of the Congo. The Europeans are superior because of their powerful weapons which they use to impose their darkness upon the people of the Congo. People truly believed that the people of the Congo were uncivilized savages. It is revealed when Marlow’s aunt says, “There had been a lot of such rot let loose in print and talk just about that time, and the excellent woman, living right in the rush of all that humbug, got carried off her feet. She talked about ‘weaning those ignorant millions from their horrid ways,’ till, upon my word, she made me quite uncomfortable. I ventured to hint that the Company was run for profit”(10). Marlow felt uncomfortable of what his aunt was stating because he disagreed with the ideas of imperialism. The darkness of imperialism spread throughout the Congo because the imperialists believed they were acting properly by getting rid off the natives’ savage ways.

Kurtz reveals darkness through imperialism. Kurtz is the ivory dealer and it is revealed that he collects more ivory for the company than any other ivory trader. Mr Kurtz is first described “as a remarkable man” and he is a very well respected man. He works with it so much that it eventually turns into an obsession for him that damages him both physically and mentally. Kurtz spreads the darkness of imperialism by placing himself as a god among all the people of the Congo and uses them to do his labor for him. That is revealed when Marlow states, “’My Intended, my ivory, my station, my river’.It made me hold my breath in expectation of hearing the wilderness burst into a prodigious peal of laughter that would shake the fixed stars their places. Everything belonged to him but that was a trifle. The thing was to know what he belonged to, how many powers of darkness claimed him for their own”(44). Kurtz saw himself as a god because he owned everything in the Congo and he use the people of the Congo to gain all his assets. His first main goal was to lead the primitive people of the Congo to civilization by becoming their king but then his greed for ivory got in the way and he began to exploit the natives spreading the darkness of imperialism there. The effect of greed was so powerful on Mr Kurtz that he was described as, “The wilderness had patted him on the head, and, behold, it was like a ball—an ivory ball; it had caressed him, and—lo!—he had withered; it had taken him, loved him, embraced him, got into his veins, consumed his flesh, and sealed his soul to its own by the inconceivable ceremonies of some devilish initiation”(44). Greed consumed Mr Kurtz so much, it was stated that ivory has consumed him.

Imperialism was represented by the Darkness throughout Heart of Darkness. The Congo reveals the imperialistic views of the British throughout the story. Many people rushed into the Congo blondly in search of fame and money. The also believed they were civilizing the savages there but they were actually spreading the darkness of imperialism throughout the Congo. Marlow also revealed the imperialistic view that were presented throughout Heart of darkness. As Marlow traveled down the Congo, he witnessed much of the darkness because he saw the mistreatment of the natives and their exploitation. He knew he did not feel welcome their andthe things people said to him about civilizing the savages made him feel somewhat uncomfortable. Marlow realizes that the imperialism is bad because it spreads darkness throughout the Congo but he does not do much to prevent it. Kurts also reveal the imperialistic view presented throughout the story. Kurtz goes to the congo and makes himself a god among the natives, forcing them to do everything he demands. By taking over everything the natives own and setting himself as god, Kurtz spread darkness to everyone.

Representing of Imperialism in Heart of Darkness. (2021, Apr 26). Retrieved from https://papersowl.com/examples/representing-of-imperialism-in-heart-of-darkness/

Imperialism in the Heart of Darkness