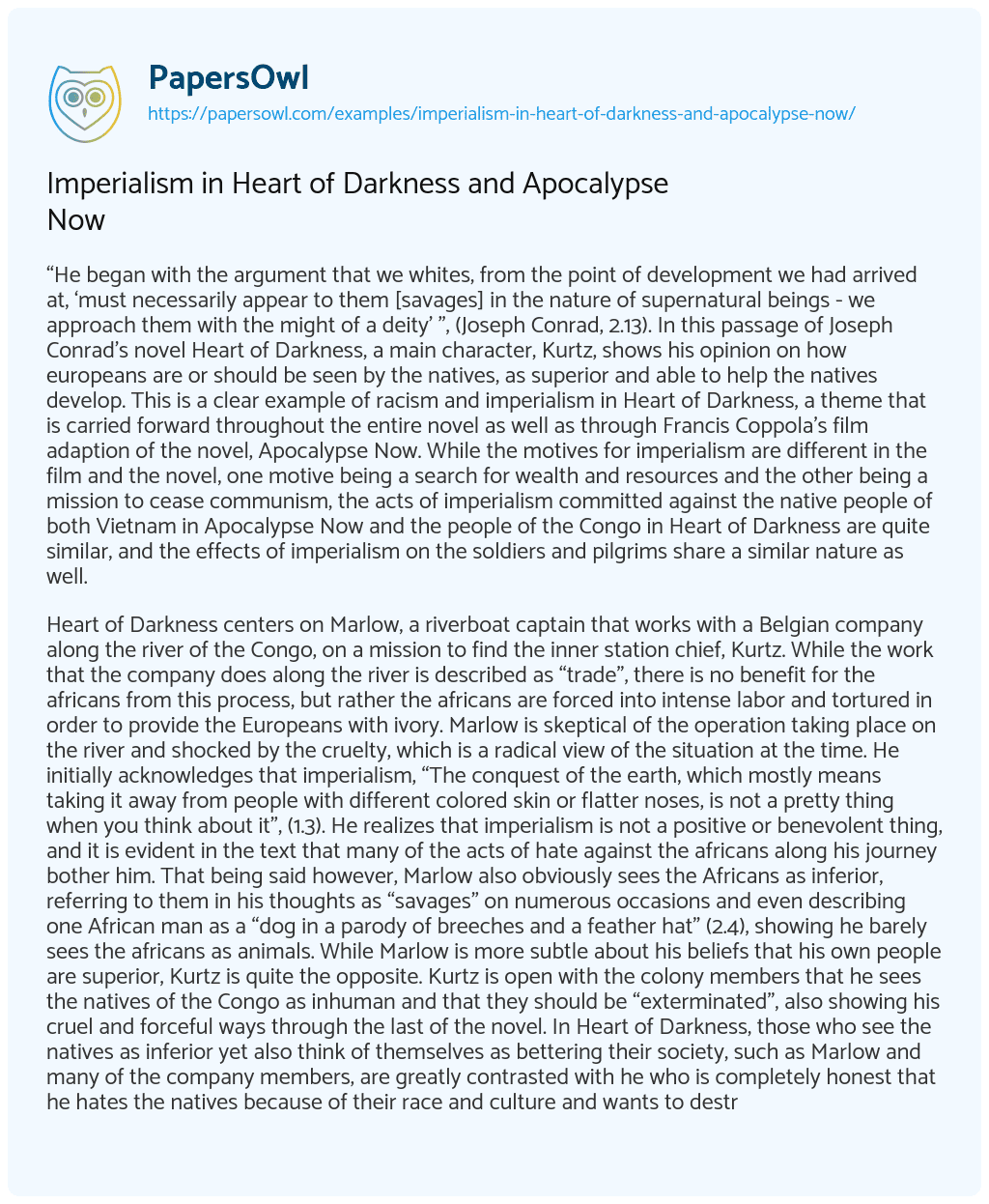 “He began with the argument that we whites, from the point of development we had arrived at, ‘must necessarily appear to them [savages] in the nature of supernatural beings – we approach them with the might of a deity’ ”, (Joseph Conrad, 2.13). In this passage of Joseph Conrad’s novel Heart of Darkness, a main character, Kurtz, shows his opinion on how europeans are or should be seen by the natives, as superior and able to help the natives develop. This is a clear example of racism and imperialism in Heart of Darkness, a theme that is carried forward throughout the entire novel as well as through Francis Coppola’s film adaption of the novel, Apocalypse Now. While the motives for imperialism are different in the film and the novel, one motive being a search for wealth and resources and the other being a mission to cease communism, the acts of imperialism committed against the native people of both Vietnam in Apocalypse Now and the people of the Congo in Heart of Darkness are quite similar, and the effects of imperialism on the soldiers and pilgrims share a similar nature as well.

Heart of Darkness centers on Marlow, a riverboat captain that works with a Belgian company along the river of the Congo, on a mission to find the inner station chief, Kurtz. While the work that the company does along the river is described as “trade”, there is no benefit for the africans from this process, but rather the africans are forced into intense labor and tortured in order to provide the Europeans with ivory. Marlow is skeptical of the operation taking place on the river and shocked by the cruelty, which is a radical view of the situation at the time. He initially acknowledges that imperialism, “The conquest of the earth, which mostly means taking it away from people with different colored skin or flatter noses, is not a pretty thing when you think about it”, (1.3). He realizes that imperialism is not a positive or benevolent thing, and it is evident in the text that many of the acts of hate against the africans along his journey bother him. That being said however, Marlow also obviously sees the Africans as inferior, referring to them in his thoughts as “savages” on numerous occasions and even describing one African man as a “dog in a parody of breeches and a feather hat” (2.4), showing he barely sees the africans as animals. While Marlow is more subtle about his beliefs that his own people are superior, Kurtz is quite the opposite. Kurtz is open with the colony members that he sees the natives of the Congo as inhuman and that they should be “exterminated”, also showing his cruel and forceful ways through the last of the novel. In Heart of Darkness, those who see the natives as inferior yet also think of themselves as bettering their society, such as Marlow and many of the company members, are greatly contrasted with he who is completely honest that he hates the natives because of their race and culture and wants to destroy them, mainly Kurtz.

In Apocalypse Now, United States Navy sailers are shown as taking part in the Vietnam War, with Captain Wlllard leading the boat on a mission to assassinate Colonel Kurtz. Apocalypse Now is similar to Heart of Darkness in its depiction of imperialism, although it is modified to fit more modern day standards, and therefor the soldiers are shown as slightly less cruel and outwardly racist to the natives of Vietnam. Willard describes some of his expeditions in Vietnam, mentioning that when civilians were hurt the soldiers would pretend to offer help, but not actually do anything to save their lives. The most shocking and heartless scene that illustrates the brutal acts of imperialism committed by Americans serving in the Vietnam war is the moment in which innocent civilians of Vietnam are shot and killed by those serving on the boat, which was a true depiction of real acts of murder committed during the Vietnam war. A key difference in Apocalypse Now vs Heart of Darkness is that the United States realizes that Colonel Kurtz’s methods are in fact unsound and evil, and needs to be stopped before any more horrific acts are committed against the natives of Vietnam.

Not only do the acts of imperialism in the novel and film effect the natives, but both the sailers and the company members are effected greatly, changing many men for the worse and causing insanity as shown in Kurtz. The characters in Apocalypse Now are all eventually transformed and hardened by their voyage, disassociating themselves from the group and reality. Throughout the film each man on the boat seems to deteriorate emotionally, and by the end of the film there is an overwhelming sense of emptiness among the two remaining sailers. Kurtz on the other hand, is shown as driven completely insane by his amount of power, need for resources, and control. Consumed by his insanity, Marlow describes Kurtz’s body, “I could see the cage of his ribs all astir, the bones of his arm waving. It was as though an animated image of death carved out of old ivory had been shaking its hand with menaces at a motionless crowd of men made of dark and glittering bronze,” (3.4). Kurtz’s drive for power has caused insanity to take over his body, causing him to look sickly and full of death.

By the conclusion of the two respective expeditions in Jospeh Conrad’s novel Heart of Darkness and Francis Coppola’s film adaption Apocalypse Now, Imperialism is clearly depicted as a destroyer of civilizations, families, and lives for the native people of the Congo and Vietnam, as well as being shown to cause a major decay in the mental and physical health of all of those involved in said imperialism, mainly the crew members of the ship in Apocalypse Now and Kurtz in both the film and the novel.

Imperialism in Heart of Darkness and Apocalypse Now. (2021, May 17). Retrieved from https://papersowl.com/examples/imperialism-in-heart-of-darkness-and-apocalypse-now/

Imperialism in the Heart of Darkness