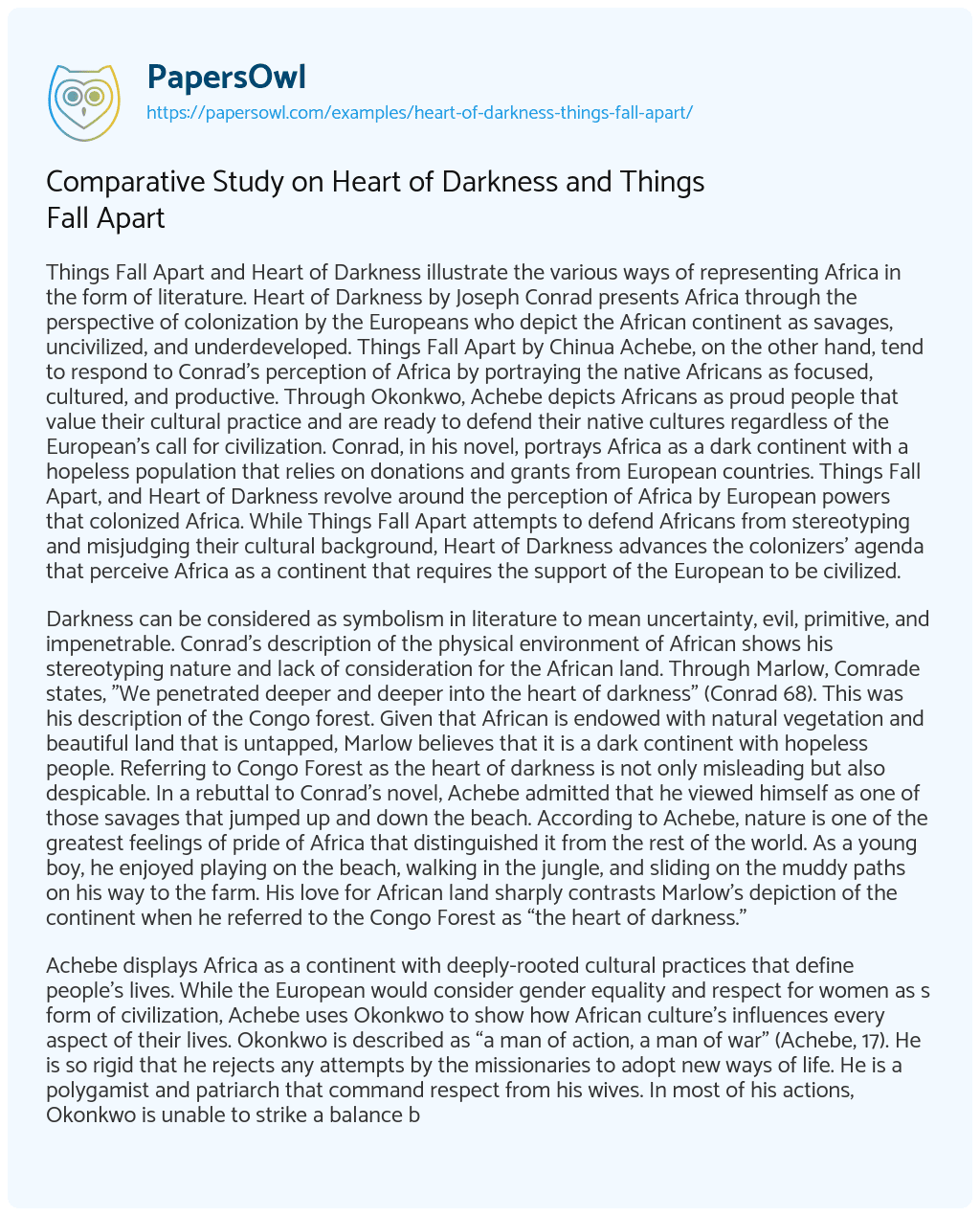 Things Fall Apart and Heart of Darkness illustrate the various ways of representing Africa in the form of literature. Heart of Darkness by Joseph Conrad presents Africa through the perspective of colonization by the Europeans who depict the African continent as savages, uncivilized, and underdeveloped. Things Fall Apart by Chinua Achebe, on the other hand, tend to respond to Conrad’s perception of Africa by portraying the native Africans as focused, cultured, and productive. Through Okonkwo, Achebe depicts Africans as proud people that value their cultural practice and are ready to defend their native cultures regardless of the European’s call for civilization. Conrad, in his novel, portrays Africa as a dark continent with a hopeless population that relies on donations and grants from European countries. Things Fall Apart, and Heart of Darkness revolve around the perception of Africa by European powers that colonized Africa. While Things Fall Apart attempts to defend Africans from stereotyping and misjudging their cultural background, Heart of Darkness advances the colonizers’ agenda that perceive Africa as a continent that requires the support of the European to be civilized.

Darkness can be considered as symbolism in literature to mean uncertainty, evil, primitive, and impenetrable. Conrad’s description of the physical environment of African shows his stereotyping nature and lack of consideration for the African land. Through Marlow, Comrade states, “We penetrated deeper and deeper into the heart of darkness” (Conrad 68). This was his description of the Congo forest. Given that African is endowed with natural vegetation and beautiful land that is untapped, Marlow believes that it is a dark continent with hopeless people. Referring to Congo Forest as the heart of darkness is not only misleading but also despicable. In a rebuttal to Conrad’s novel, Achebe admitted that he viewed himself as one of those savages that jumped up and down the beach. According to Achebe, nature is one of the greatest feelings of pride of Africa that distinguished it from the rest of the world. As a young boy, he enjoyed playing on the beach, walking in the jungle, and sliding on the muddy paths on his way to the farm. His love for African land sharply contrasts Marlow’s depiction of the continent when he referred to the Congo Forest as “the heart of darkness.”

Achebe displays Africa as a continent with deeply-rooted cultural practices that define people’s lives. While the European would consider gender equality and respect for women as s form of civilization, Achebe uses Okonkwo to show how African culture’s influences every aspect of their lives. Okonkwo is described as “a man of action, a man of war” (Achebe, 17). He is so rigid that he rejects any attempts by the missionaries to adopt new ways of life. He is a polygamist and patriarch that command respect from his wives. In most of his actions, Okonkwo is unable to strike a balance between reasoning and reality. His actions are mainly violence towards his wives, a habit that portrays African men in a bad light (Achebe, 18). Despite the behavior, he remains true to his beliefs about the role of men in the African context.

Heart of Darkness advances the colonialists ideology of exploiting Africa. The characters in this novel use force and cruel means to make things work their way. While in Congo, Kurtz represents the imperialists whose primary agenda for Africa was to exploit the natural resources by forcing the Africans to provide labor freely or at relatively lower cost (Moore, 23). Kurtz leads European imperialists who beat the Africans to work for them for free. Conrad demonstrated that whites do not value the lives of black people (Moore, 23). For instance, Africans that resisted any rules by th

Imperialism in “Heart of Darkness” and “Things Fall Apart”

Heart of Darkness Title Meaning to the Work