Great Depression: what Happened, Causes, how it Ended 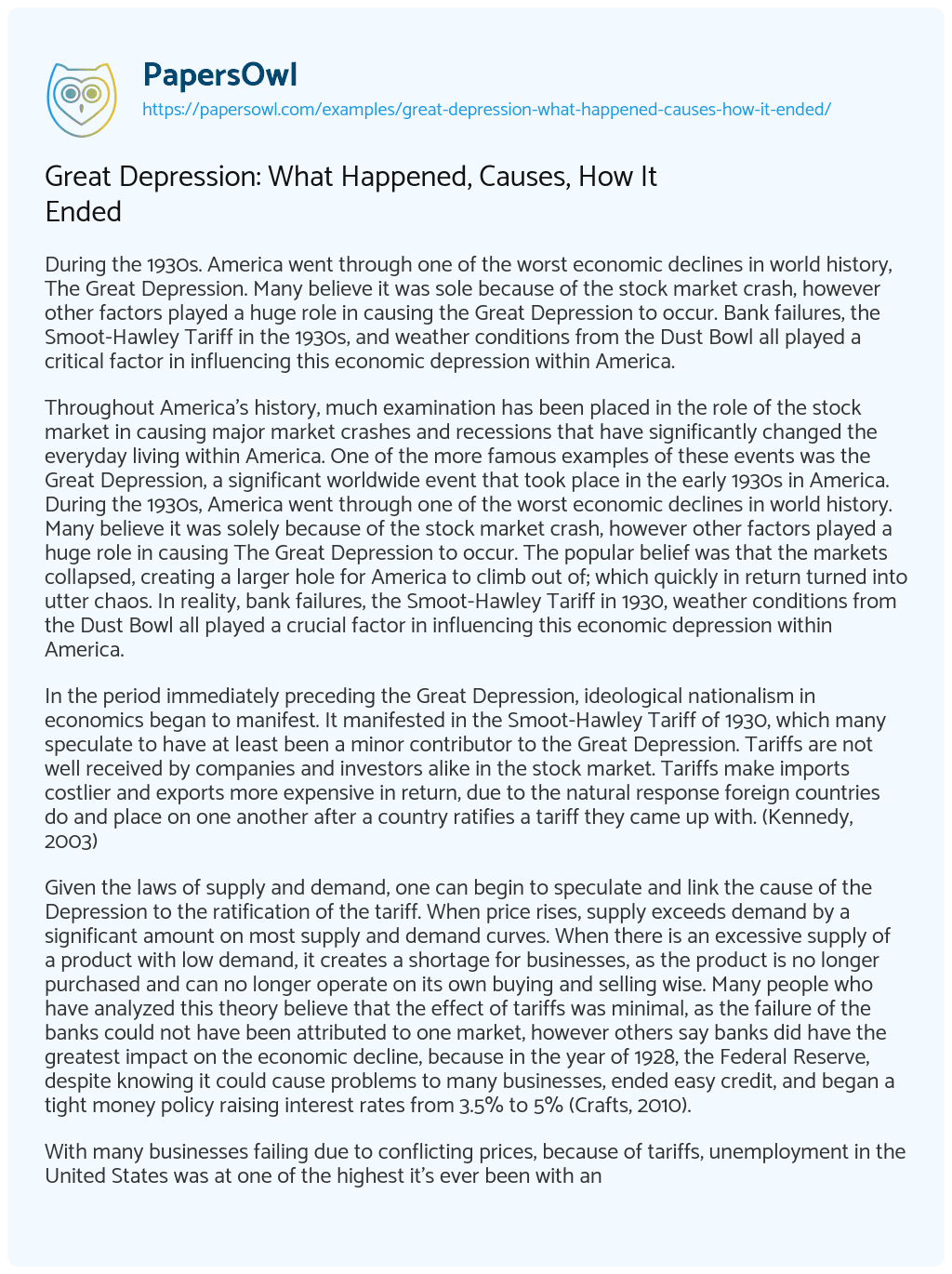 During the 1930s. America went through one of the worst economic declines in world history, The Great Depression. Many believe it was sole because of the stock market crash, however other factors played a huge role in causing the Great Depression to occur. Bank failures, the Smoot-Hawley Tariff in the 1930s, and weather conditions from the Dust Bowl all played a critical factor in influencing this economic depression within America.

Throughout America’s history, much examination has been placed in the role of the stock market in causing major market crashes and recessions that have significantly changed the everyday living within America. One of the more famous examples of these events was the Great Depression, a significant worldwide event that took place in the early 1930s in America. During the 1930s, America went through one of the worst economic declines in world history. Many believe it was solely because of the stock market crash, however other factors played a huge role in causing The Great Depression to occur. The popular belief was that the markets collapsed, creating a larger hole for America to climb out of; which quickly in return turned into utter chaos. In reality, bank failures, the Smoot-Hawley Tariff in 1930, weather conditions from the Dust Bowl all played a crucial factor in influencing this economic depression within America.

In the period immediately preceding the Great Depression, ideological nationalism in economics began to manifest. It manifested in the Smoot-Hawley Tariff of 1930, which many speculate to have at least been a minor contributor to the Great Depression. Tariffs are not well received by companies and investors alike in the stock market. Tariffs make imports costlier and exports more expensive in return, due to the natural response foreign countries do and place on one another after a country ratifies a tariff they came up with. (Kennedy, 2003)

Given the laws of supply and demand, one can begin to speculate and link the cause of the Depression to the ratification of the tariff. When price rises, supply exceeds demand by a significant amount on most supply and demand curves. When there is an excessive supply of a product with low demand, it creates a shortage for businesses, as the product is no longer purchased and can no longer operate on its own buying and selling wise. Many people who have analyzed this theory believe that the effect of tariffs was minimal, as the failure of the banks could not have been attributed to one market, however others say banks did have the greatest impact on the economic decline, because in the year of 1928, the Federal Reserve, despite knowing it could cause problems to many businesses, ended easy credit, and began a tight money policy raising interest rates from 3.5% to 5% (Crafts, 2010).

With many businesses failing due to conflicting prices, because of tariffs, unemployment in the United States was at one of the highest it’s ever been with an unemployment rate of 22.9% in 1932. Because the unemployment rate was so high, many people suffered from not only not having reliable income, but from starvation, because with money not flowing within the economy properly as it should be, this created a variety of problems for many families across the country (Crafts, 2010).

The trouble with this theory is that businesses knew during this time that there was a growing lack of confidence. This was attributed to the banks, who had begun to fail and as a result created a declining market force with demand driving down. Thus, two different conditions needed to be taken into account – demand driving down while the amount of supplies remained at the same level which would create a shortage for businesses. Given the horrible market condition, as weak market conditions would emerge, businesses would be looking at a long path of unsolvable problems for many years to come (Kennedy 2003).

One of the greater ironies of the flawed reasoning behind Smoot-Hawley was how quickly the tariffs would backfire on them. Many states had already begun experiencing moderate financial panics, due to the ratification of the new tariffs that were anticipated to take place along with the failure in some of banks throughout the country. During the summer of 1930, a wave of heat and dry conditions known as the “Dust Bowl” ran through the United States. The Dust Bowl wiped out or severely harmed almost all crop producers across the country, creating an extreme force upon the supply of the agriculture industry. Consider that during this time, foreign countries had begun realizing and predicting as to the potential effects of tariffs on goods that they were importing to the United States. The agriculture scene would be particularly negatively affected, as they depended on raw products to function as a business. With foreign relationships worsening due to the “unexpected” response to the new tariffs, farms and rural communities which depended on agriculture would greatly suffer. A period of dryness and record-setting heat temperatures above 100 degrees Fahrenheit occurred frequently across the United States. Their crops were essentially inhospitable for growth because of the various factors, meaning that there would be little to no food for an extensive period. Furthermore, with worsening business from imports and exports soon to be affected, these communities were put into a strong bind that would be nearly impossible to break out of. (Romer, 2018).

Primary sources collected measuring the health of Midwestern economies such as St. Louis provides valuable insight into the problems that arose for these communities (Federal Home Loan Bank Board). The standard of living dropped, with little to no business available because of the inhospitable temperatures of the summer. Goods quickly became useless, and the entire economic scheme of the country was put into jeopardy (Federal Home Loan Bank Board, 1933).

One of the more hotly debated causes of the Great Depression was the failure of banks. Since the Depression occurred, two rational school thoughts have emerged about theories for why the onset of bank failures caused the Depression during this time. The Keynesian school of thought was centered around the belief that demand was temporarily driven down, and the reactions and greed of investors pushed the economy to the point of no return as money supply continued to dry up. Monetarist school of thought believed that the federal reserve forced the hands of banks by creating unrealistic levels of money supply which shrunk the economy and created a panic (Kennedy, 2003).

Both schools of thought are correct in their approach, but incorrect in their findings. During the few years preceding the crisis known as “Black Tuesday,” banks were beginning to fail. A bank has the responsibility to hold onto and secure funds for its customers. Naturally, given that the banks were starting to fail, there was a concern about the ability of banks across the country to be able to keep customers’ funds secured. As news began to spread, a general panic rose in which consumers began to rapidly withdraw their money from the banks because they no longer trusted them. A quick withdrawal of funds from the banks, combined with ongoing liabilities, created an issue of insolvency that very few banks could recover from. Afterwards, the government, had to figure out how to recapture these funds and keep the banks alive because a severe withdrawal of money being supplied into the market would be catastrophic. The government resolved to shrink the money supply, as it would lessen the effects of the sudden withdrawal and panic that had begun in the years before the Depression (Romer, 2018).

The problem with such action was that the withdrawal of money supply from the market indicated that there was a growing concern about the health of the market. Worried, investors began to withdraw their money from stocks, much like many in the banks had already been doing. Furthermore, the United States experienced a drastic downfall in the industrial production with a decline of 46.8% while the Gross Domestic Product (GDP) fell by 30% Combined with the effects of insolvency, individuals had to take out loans to cover their debts due to the failure of the bank to hold onto their money securely. Banks that had been thriving realized that it was no longer savory to participate in the market, and began to withdraw their investments along with halting providing loans. Thus, an enormous amount of money that had been supplied into the market was leaving within a short period due to the banks. Inevitably, failure followed, and the Depression began (Romer, 2018).

The Great Depression is popularly blamed on circumstance, rather than on incompetence. It is clear that the government’s actions had a direct impact on the initiation of The Great Depression, and on the quality of living of its citizens throughout the country. Furthermore, along with the Dust Bowl which created enormous agricultural deficit. When all is analyzed, we can say the government played a role on this depression; however, these consequences were utterly preventable with given the right education. Unfortunately, information was not as available, and the decision making of ratifying the Smoot-Hawley Tariff in 1930, and bank failures caused a huge economic decline along with the weather conditions from the Dust Bowl.

Great Depression: What Happened, Causes, How It Ended. (2019, Oct 18). Retrieved from https://papersowl.com/examples/great-depression-what-happened-causes-how-it-ended/