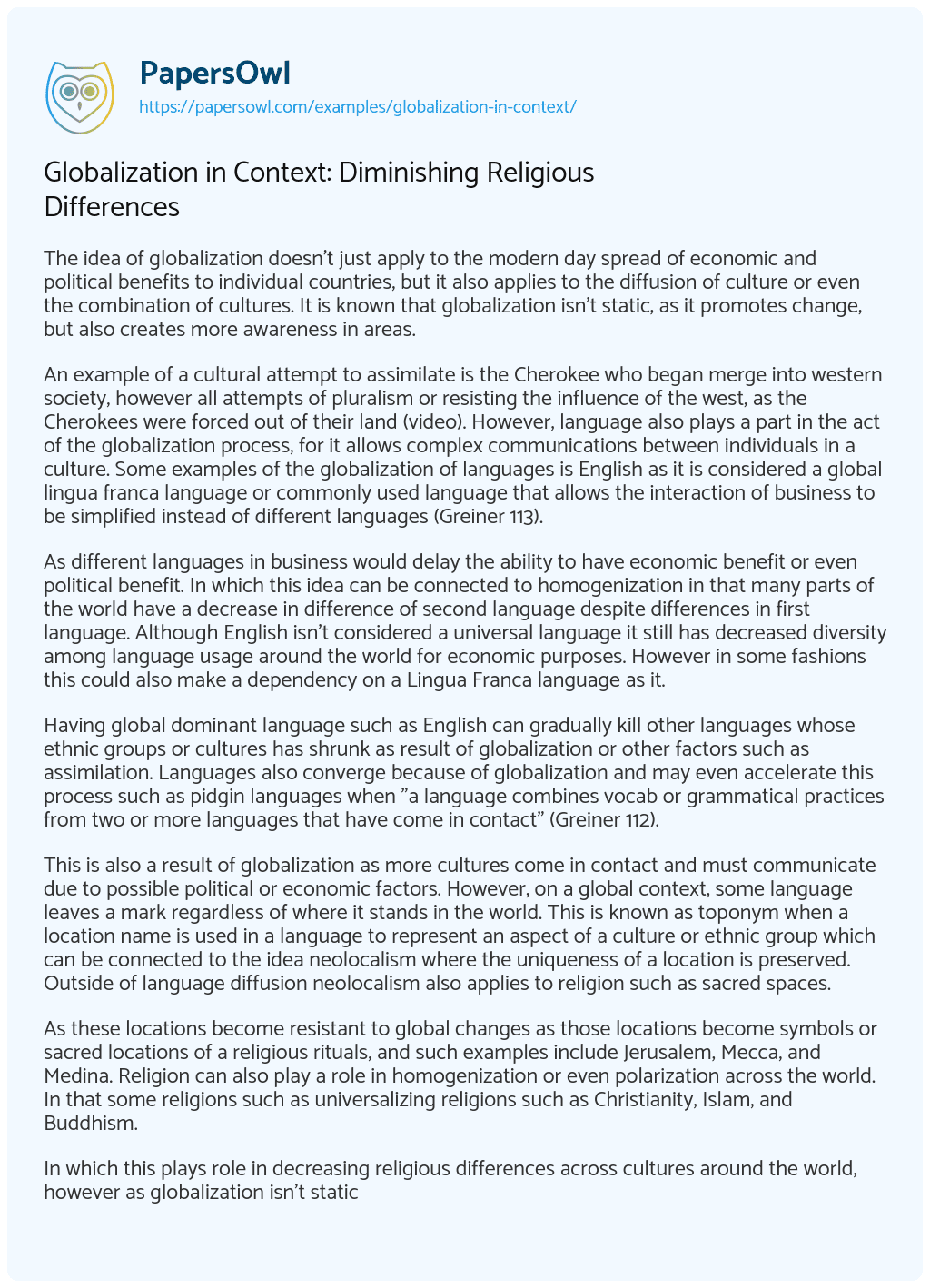 The idea of globalization doesn’t just apply to the modern day spread of economic and political benefits to individual countries, but it also applies to the diffusion of culture or even the combination of cultures. It is known that globalization isn’t static, as it promotes change, but also creates more awareness in areas.

An example of a cultural attempt to assimilate is the Cherokee who began merge into western society, however all attempts of pluralism or resisting the influence of the west, as the Cherokees were forced out of their land (video). However, language also plays a part in the act of the globalization process, for it allows complex communications between individuals in a culture. Some examples of the globalization of languages is English as it is considered a global lingua franca language or commonly used language that allows the interaction of business to be simplified instead of different languages (Greiner 113).

As different languages in business would delay the ability to have economic benefit or even political benefit. In which this idea can be connected to homogenization in that many parts of the world have a decrease in difference of second language despite differences in first language. Although English isn’t considered a universal language it still has decreased diversity among language usage around the world for economic purposes. However in some fashions this could also make a dependency on a Lingua Franca language as it.

Having global dominant language such as English can gradually kill other languages whose ethnic groups or cultures has shrunk as result of globalization or other factors such as assimilation. Languages also converge because of globalization and may even accelerate this process such as pidgin languages when “a language combines vocab or grammatical practices from two or more languages that have come in contact” (Greiner 112).

This is also a result of globalization as more cultures come in contact and must communicate due to possible political or economic factors. However, on a global context, some language leaves a mark regardless of where it stands in the world. This is known as toponym when a location name is used in a language to represent an aspect of a culture or ethnic group which can be connected to the idea neolocalism where the uniqueness of a location is preserved. Outside of language diffusion neolocalism also applies to religion such as sacred spaces.

In which this plays role in decreasing religious differences across cultures around the world, however as globalization isn’t static this means the potential homogenization properties of universalizing religions face possible fragmentation in regions where the religion branches off into similar but not the same belief system. It may also play role in promoting polarization as differences could cause ethnic conflicts.

Management Strategies in the Context of Globalization

The Impact of BTS on Globalization

Meanings and Perspectives of Globalization

The Globalization of Baseball