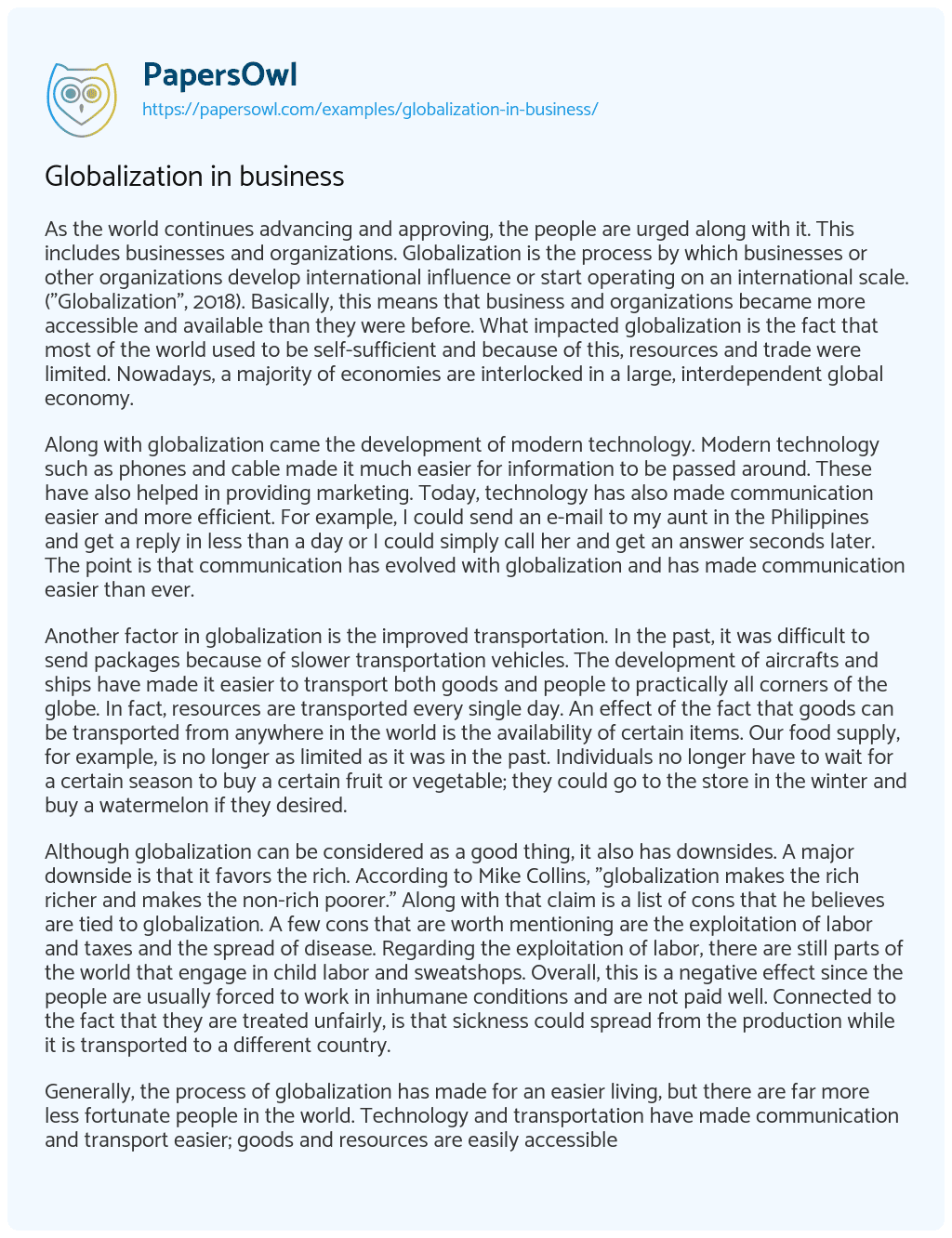 As the world continues advancing and approving, the people are urged along with it. This includes businesses and organizations. Globalization is the process by which businesses or other organizations develop international influence or start operating on an international scale. (“Globalization”, 2018). Basically, this means that business and organizations became more accessible and available than they were before. What impacted globalization is the fact that most of the world used to be self-sufficient and because of this, resources and trade were limited. Nowadays, a majority of economies are interlocked in a large, interdependent global economy.

Along with globalization came the development of modern technology. Modern technology such as phones and cable made it much easier for information to be passed around. These have also helped in providing marketing. Today, technology has also made communication easier and more efficient. For example, I could send an e-mail to my aunt in the Philippines and get a reply in less than a day or I could simply call her and get an answer seconds later. The point is that communication has evolved with globalization and has made communication easier than ever.

Another factor in globalization is the improved transportation. In the past, it was difficult to send packages because of slower transportation vehicles. The development of aircrafts and ships have made it easier to transport both goods and people to practically all corners of the globe. In fact, resources are transported every single day. An effect of the fact that goods can be transported from anywhere in the world is the availability of certain items. Our food supply, for example, is no longer as limited as it was in the past. Individuals no longer have to wait for a certain season to buy a certain fruit or vegetable; they could go to the store in the winter and buy a watermelon if they desired.

Although globalization can be considered as a good thing, it also has downsides. A major downside is that it favors the rich. According to Mike Collins, “globalization makes the rich richer and makes the non-rich poorer.” Along with that claim is a list of cons that he believes are tied to globalization. A few cons that are worth mentioning are the exploitation of labor and taxes and the spread of disease. Regarding the exploitation of labor, there are still parts of the world that engage in child labor and sweatshops. Overall, this is a negative effect since the people are usually forced to work in inhumane conditions and are not paid well. Connected to the fact that they are treated unfairly, is that sickness could spread from the production while it is transported to a different country.

Generally, the process of globalization has made for an easier living, but there are far more less fortunate people in the world. Technology and transportation have made communication and transport easier; goods and resources are easily accessible when they are in stock. Although, the production of our goods come at a price. A large demand of labor is needed to produce these goods and many times, businesses turn to cheaper tactics. This can lead to unfair treatment of workers and the spread of disease.

Analysis of Globalization and Challenges

Management Strategies in the Context of Globalization