Gender Inequality Affects most Parts of the World 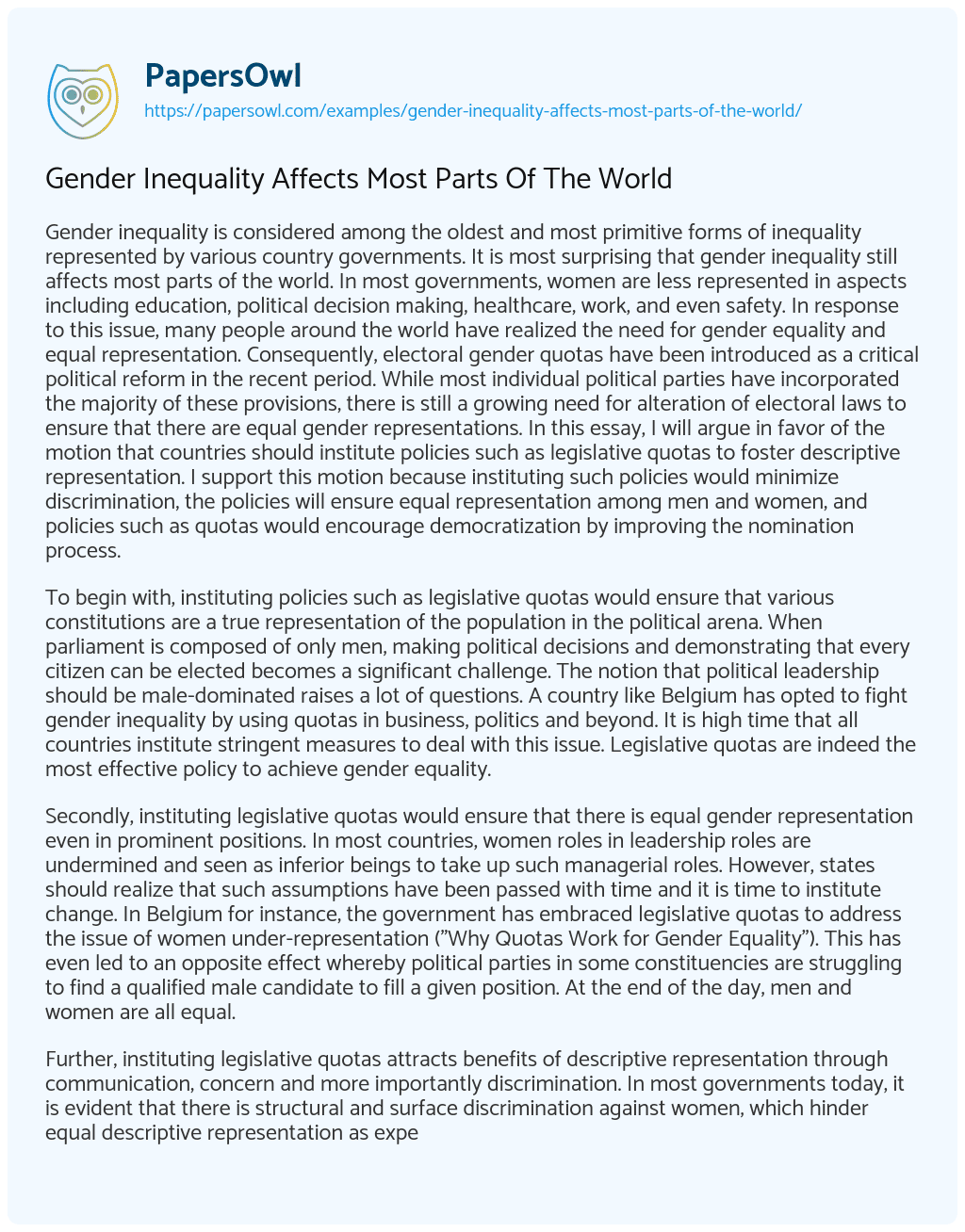 Gender inequality is considered among the oldest and most primitive forms of inequality represented by various country governments. It is most surprising that gender inequality still affects most parts of the world. In most governments, women are less represented in aspects including education, political decision making, healthcare, work, and even safety. In response to this issue, many people around the world have realized the need for gender equality and equal representation. Consequently, electoral gender quotas have been introduced as a critical political reform in the recent period. While most individual political parties have incorporated the majority of these provisions, there is still a growing need for alteration of electoral laws to ensure that there are equal gender representations. In this essay, I will argue in favor of the motion that countries should institute policies such as legislative quotas to foster descriptive representation. I support this motion because instituting such policies would minimize discrimination, the policies will ensure equal representation among men and women, and policies such as quotas would encourage democratization by improving the nomination process.

To begin with, instituting policies such as legislative quotas would ensure that various constitutions are a true representation of the population in the political arena. When parliament is composed of only men, making political decisions and demonstrating that every citizen can be elected becomes a significant challenge. The notion that political leadership should be male-dominated raises a lot of questions. A country like Belgium has opted to fight gender inequality by using quotas in business, politics and beyond. It is high time that all countries institute stringent measures to deal with this issue. Legislative quotas are indeed the most effective policy to achieve gender equality.

Secondly, instituting legislative quotas would ensure that there is equal gender representation even in prominent positions. In most countries, women roles in leadership roles are undermined and seen as inferior beings to take up such managerial roles. However, states should realize that such assumptions have been passed with time and it is time to institute change. In Belgium for instance, the government has embraced legislative quotas to address the issue of women under-representation (“Why Quotas Work for Gender Equality”). This has even led to an opposite effect whereby political parties in some constituencies are struggling to find a qualified male candidate to fill a given position. At the end of the day, men and women are all equal.

Further, instituting legislative quotas attracts benefits of descriptive representation through communication, concern and more importantly discrimination. In most governments today, it is evident that there is structural and surface discrimination against women, which hinder equal descriptive representation as expected. Therefore, instituting such policies would ensure that women are legally given the right to vote as well as the capacity to serve on juries and the like as opposed to the notion that women are just caregivers for the elderly and children and cannot make any positive contribution in politics. Based on studies, there are persistent gender gaps between men and women in political leadership across the globe whereby fewer women are engaged compared to men. This disproportionality in political leadership raises concerns among women citizens who view themselves as non-critical actors in politics.

However, while there are various advantages of legislative quotas, they have been criticized because of their impact on symbolic representation. Generally, questions have been raised in regards to the possible transformative nature of gender quotas on politics, society, and women. A major disadvantage is that the use of legislative quotas would suggest that gender is the basis of electing leaders and not their qualifications. A significant challenge that would arise in the use of quotas is that the public would view it as an ineffective way of electing leaders since they would be selected based on their gender and not qualifications. For this reason, there is a possibility that more qualified candidates may be pushed aside because they are of the opposite gender.

While legislative quotas would increase symbolic representation, they are a danger of essentialism. Essentialism is mostly experienced where gender quotas lead to over-emphasis on femaleness, which has an effect of decreasing the importance of other aspects including class, race, and sexuality (Hopp, 2015). As a consequence, this tendency might lead to the use of stereotypes or the benefit of the dominant in-group within the group irrespective of the decreased differences within the female group. It can also be argued that the danger of essentialism is the basis of the idea that any female leader can represent all women.

Gender Inequality Affects Most Parts Of The World. (2020, Dec 18). Retrieved from https://papersowl.com/examples/gender-inequality-affects-most-parts-of-the-world/