Gen Z Entering the Workforce: the Difference between Generations 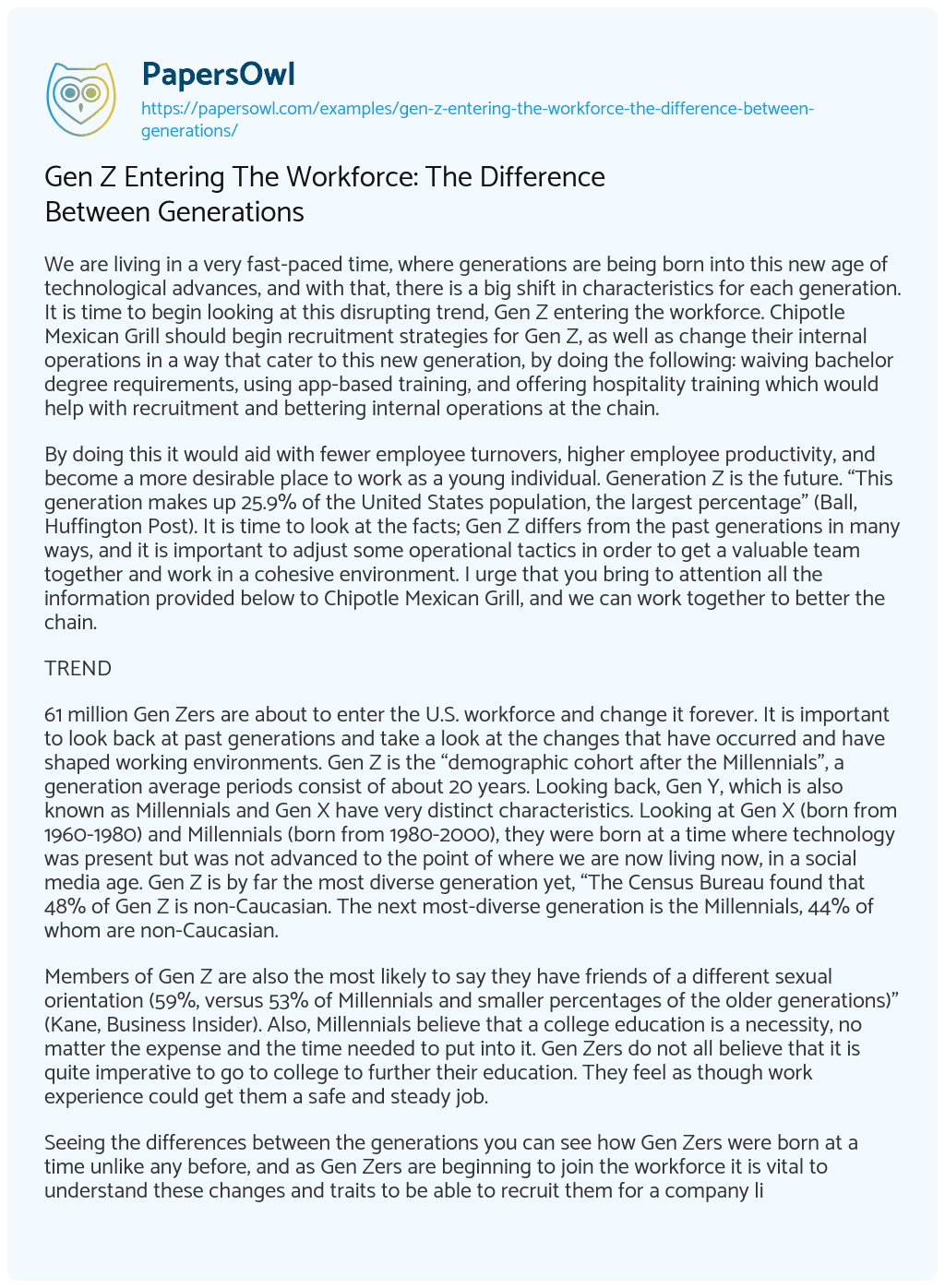 We are living in a very fast-paced time, where generations are being born into this new age of technological advances, and with that, there is a big shift in characteristics for each generation. It is time to begin looking at this disrupting trend, Gen Z entering the workforce. Chipotle Mexican Grill should begin recruitment strategies for Gen Z, as well as change their internal operations in a way that cater to this new generation, by doing the following: waiving bachelor degree requirements, using app-based training, and offering hospitality training which would help with recruitment and bettering internal operations at the chain.

By doing this it would aid with fewer employee turnovers, higher employee productivity, and become a more desirable place to work as a young individual. Generation Z is the future. “This generation makes up 25.9% of the United States population, the largest percentage” (Ball, Huffington Post). It is time to look at the facts; Gen Z differs from the past generations in many ways, and it is important to adjust some operational tactics in order to get a valuable team together and work in a cohesive environment. I urge that you bring to attention all the information provided below to Chipotle Mexican Grill, and we can work together to better the chain.

61 million Gen Zers are about to enter the U.S. workforce and change it forever. It is important to look back at past generations and take a look at the changes that have occurred and have shaped working environments. Gen Z is the “demographic cohort after the Millennials”, a generation average periods consist of about 20 years. Looking back, Gen Y, which is also known as Millennials and Gen X have very distinct characteristics. Looking at Gen X (born from 1960-1980) and Millennials (born from 1980-2000), they were born at a time where technology was present but was not advanced to the point of where we are now living now, in a social media age. Gen Z is by far the most diverse generation yet, “The Census Bureau found that 48% of Gen Z is non-Caucasian. The next most-diverse generation is the Millennials, 44% of whom are non-Caucasian.

Members of Gen Z are also the most likely to say they have friends of a different sexual orientation (59%, versus 53% of Millennials and smaller percentages of the older generations)” (Kane, Business Insider). Also, Millennials believe that a college education is a necessity, no matter the expense and the time needed to put into it. Gen Zers do not all believe that it is quite imperative to go to college to further their education. They feel as though work experience could get them a safe and steady job.

Seeing the differences between the generations you can see how Gen Zers were born at a time unlike any before, and as Gen Zers are beginning to join the workforce it is vital to understand these changes and traits to be able to recruit them for a company like Chipotle. Some Gen Zers saw the economic recession that took place in 2008, and because of that they are far more serious about there finances, and want to be part of a company that has reliable and strong values. It is important for Chipotle to modify recruitment tactics and plans as this new generation is emerging at a time of vast technologic advancements and a world taken over by growing technology and social media.

Chipotle Mexican Grill is an American chain of fast casual restaurants that first opened in Denver on July 13th, 1993 and has since expanded to 2,250 locations in the United States, United Kingdom, Canada, Germany, and France, specializing in tacos and Mission-style burritos.

Looking at the revenue of sales, Chipotle sales increased 8.3% in the last year. The stock price is currently at $490.99, and fluctuates a bit quite often. There have been some conflicts and company challenges that have occurred through the years. In 2015, there was an E Coli outbreak in 14 restaurants where dozens of individuals became infected after eating at Chipotle. In this digital age, news spreads rather quickly and the E Coli outbreak did result in “devastated sales” (Peterson, Business Insider).

Another challenge that Chipotle faces is competing with other casual restaurants like CAVA, which is also a fast-casual restaurant that has the same ordering process as Chipotle. CAVA serves Mediterranean style cuisine, and currently has 75 locations and is still expanding. Chipotle has made quite a name for itself in the past few years, and has committed to only using the freshest and tastiest ingredients, all prepared by hand. Chipotle has also taken steps taking part in this digital era by partnering up with Doordash, which is an “on-demand restaurant courier service founded in 2013 by Stanford students.

DoorDash is one of several technology companies that use logistics services to offer food delivery from restaurants on-demand.” It makes it easy for a customer to have food delivered to them quickly using just an app. In addition, the chain has been doing well by creating fundraisers. “Each of our restaurants is committed to supporting local groups like neighboring schools; youth sports teams and non-profit organizations. One way we do this is by hosting fundraisers at our restaurants.” Chipotle has a lot to offer, and getting ready for Gen Z joining them in their mission would only take them farther. As well as get the attention of more potential customers from different parts of the country.

Coming up with innovative recruitment tactics to inspire Gen Z would be very impactful for Chipotle. Instilling a new way to reach Gen Z in the recruitment process and in the working environment is key. Some tactics could include:

Waiving bachelor degree requirements. According to Ryan Jenkins, who is a Gen Z and millennial speaker “Gen Z disrupts the traditional path from college to career” due to innovative times. Hiring an individual with experience and intelligence and molding them into an ideal employee could be a great move.

Next, using app-based training, where new staff members are able to train virtually would potentially lead to a more effective and enticing way to learn the ins and outs of the staff members role in the company. Visually being able to watch the daily processes that must be completed may make it easier to remember what and how to complete each task properly.

Lastly, offering hospitality training would be helpful and beneficial, which teaches employees how to properly greet and speak to customers. Gen Zers being raised in a digital age means that they are more comfortable in front of a screen rather than face-to-face communication. Hospitality training would help employees become more comfortable with using this communication type working in the restaurant or even in the corporate offices.

According to Tom Koulopoulos and Dan Keldsen, who wrote Gen Z Effect: The Six Forces Shaping the Future of Business, they add “For Gen Z, technology is invisible; its just part of the way the world behaves toward and interacts with them. They are blind to the distinction between technology and the natural behavior of certain objects. For them, technology is just another thread in the fabric of their lives.”

By implementing these recruitment tactics it would result in less employee turnover, which leads to saving funds and time constantly training new individuals that may come in. Another benefit is higher employee productivity; they would be trained the right way every time, and there would not be as much confusion and miscommunication in the beginning stages working with the company. Finally, Chipotle would stand as a more desirable place for younger individuals, and that would give an opportunity for many to grow with the company, and take their career farther.

Gen Z does differ from other generations, especially in comparison to Millenials. Gen Z has been rising at a time different than any other in the past. They have been known to be more competitive compared to past generations and that means that many Gen Zers do not like working as one. “They want to work on their own and be judged on their own merits rather than those of their team. In addition, according to David and Jonah Stillman who wrote Gen Z @ work, “72% of Gen Zers say they are competitive with people doing the same job.” Gen Z also understands that there’s a need for constant skill development in order to stay relevant” (Patel, Forbes). Chipotle operates as a close-knit team, and pride themselves on working together; and this may be challenge for new Gen Zers. However, they know the importance of work ethic and will do what they need to in a work environment as long as they are rewarded in some sense, like a bonus or some type of validation for their work.

Gen Z entering the workforce is happening, being prepared and ready to recruit and shift company operations will be vital to the existence of a chain like Chipotle Mexican Grill. “Understanding how the majority of the newest class of workers think and feel will give you a leg up when it comes time to attracting and retaining them” (Trageser, Select International). As you can see, with time, there will always be changes and being prepared could set you apart from everyone else and potentially help with your team, sales, and the company image. Taking the time and doing this the correct way will be the right step. Again, I urge you to evaluate all this given information and share it with the Chipotle team, and together we can start something great for not just the company but for our future generation.

Gen Z Entering The Workforce: The Difference Between Generations. (2022, Jun 23). Retrieved from https://papersowl.com/examples/gen-z-entering-the-workforce-the-difference-between-generations/

What is the Difference between Older Generation and the Young One?