Freedom Must be Demanded 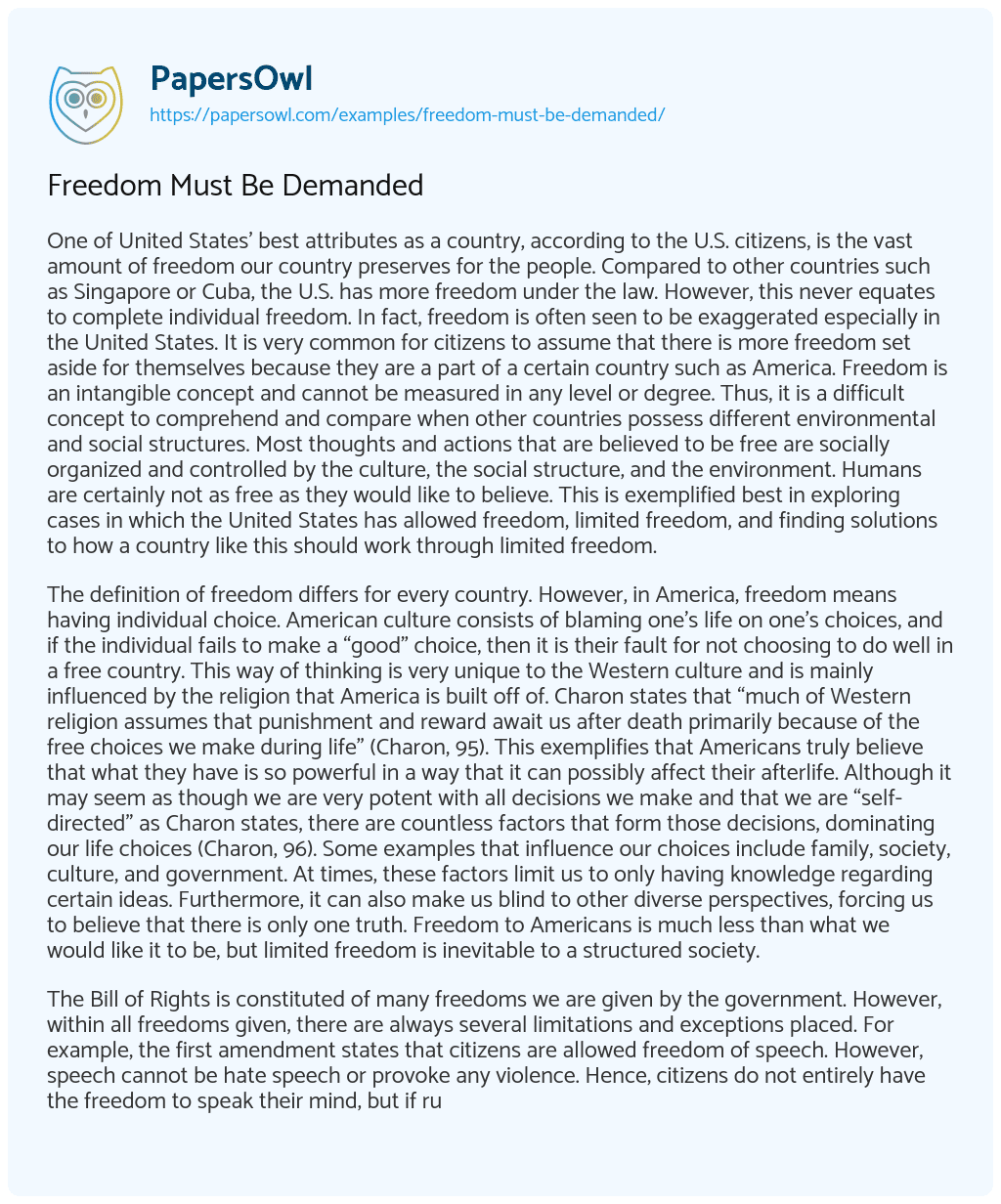 One of United States’ best attributes as a country, according to the U.S. citizens, is the vast amount of freedom our country preserves for the people. Compared to other countries such as Singapore or Cuba, the U.S. has more freedom under the law. However, this never equates to complete individual freedom. In fact, freedom is often seen to be exaggerated especially in the United States. It is very common for citizens to assume that there is more freedom set aside for themselves because they are a part of a certain country such as America. Freedom is an intangible concept and cannot be measured in any level or degree. Thus, it is a difficult concept to comprehend and compare when other countries possess different environmental and social structures. Most thoughts and actions that are believed to be free are socially organized and controlled by the culture, the social structure, and the environment. Humans are certainly not as free as they would like to believe. This is exemplified best in exploring cases in which the United States has allowed freedom, limited freedom, and finding solutions to how a country like this should work through limited freedom.

The definition of freedom differs for every country. However, in America, freedom means having individual choice. American culture consists of blaming one’s life on one’s choices, and if the individual fails to make a “good” choice, then it is their fault for not choosing to do well in a free country. This way of thinking is very unique to the Western culture and is mainly influenced by the religion that America is built off of. Charon states that “much of Western religion assumes that punishment and reward await us after death primarily because of the free choices we make during life” (Charon, 95). This exemplifies that Americans truly believe that what they have is so powerful in a way that it can possibly affect their afterlife. Although it may seem as though we are very potent with all decisions we make and that we are “self-directed” as Charon states, there are countless factors that form those decisions, dominating our life choices (Charon, 96). Some examples that influence our choices include family, society, culture, and government. At times, these factors limit us to only having knowledge regarding certain ideas. Furthermore, it can also make us blind to other diverse perspectives, forcing us to believe that there is only one truth. Freedom to Americans is much less than what we would like it to be, but limited freedom is inevitable to a structured society.

The Bill of Rights is constituted of many freedoms we are given by the government. However, within all freedoms given, there are always several limitations and exceptions placed. For example, the first amendment states that citizens are allowed freedom of speech. However, speech cannot be hate speech or provoke any violence. Hence, citizens do not entirely have the freedom to speak their mind, but if rules are followed, freedom is given. Despite some limitations on freedom, the government ensures that all freedom of speech, whether popular or unpopular, stay protected. Brandenburg v. Ohio was one of the many controversial cases decided by the Supreme Court. Brandenburg, a Ku Klux Klan member, expressed his hatred for the government and other ethnicities using ethnic slurs on national television and was arrested for his actions. Although both the District Court and the Supreme Court of Ohio denied and said that his speech was not protected, the U.S. Supreme Court sided with Brandenburg, unanimously (Mr. Beat). This type of speech is definitely derogatory to many ethnicities and cultures, but it illustrates that the government still must respect any kind of speech, even if the content spoken is controversial. This shows that freedom must be demanded.

With the ongoing changes in the modern world, freedom in the United States never stops growing. Currently, with the growth of technology, there is more freedom given to the citizens. Net neutrality allows all individuals in the United States to have equal access to all types of information on the internet. Although technology increases freedom, at the same time, it gives more freedom to the government to access private information. Anything distributed to the internet is never one-hundred percent secure or private. An individual’s right to privacy is not explicitly stated in the Constitution, however, it is implied within many of the amendments. For example, the Third Amendment protects the privacy of one’s house, and the Fourth Amendment protects the privacy of personal space and belongings. There is a protection of privacy to some extent, however, technology has blurred the lines of privacy to a huge extent. With the increase in online payments, social media, and cell phone usage, individuals are quick to input all of their personal information into their smart device. This allows internet companies to “sell our personal data for profit, often by using cookies on our computers to track our activity” (Eskow). Others are making millions off of personal information, not only destroying the right to privacy but also allowing others to gain benefits from it. Although it is never announced to the public, it is quite easy for big companies such as Facebook or Apple to expose personal information regarding their customers, and in some cases, it is done legally in works with the government. This exemplifies that just because we have more freedom, it does not always equate to more justice or happiness.

By understanding that there is much less freedom in the United States than Americans anticipated, the solution to doing well in a typical American society is to gain knowledge. By gaining a thorough knowledge of the world around us, it is much easier to make educated decisions and choices for the future. Because much of our life choices are dependent on outside factors and even some factors we cannot control, we must recognize that “as knowledge and understanding increase, more freedom usually has a better chance” (Charon, 112). Charon also discusses the difference between freedom of thought and action in a sense that anything can be thought but when that thought is influenced by others, freedom is limited. Any person can think of an action but if they do not perform any actions, then their freedom is also limited. Poor knowledge can limit both freedoms of thought and action because, without individual knowledge, the only source they can rely on is others. However, sometimes gaining knowledge becomes difficult when there are stronger influences in the way of accepting certain ideas. At times, it is very easy for us to believe what others have told us or have no opportunity to understand different concepts. Yet it never means to stop understanding or have an attempt to understand the environment around us.

One of the biggest factors that limit freedom, especially in the United States, is culture. Culture does not only indicate ethnic backgrounds from another country but simply “ideas, values, and rules fit in relation to that particular group” (Charon, 103). As culture can bring similar individuals together and teach ideas on how to be successful, it can also bend the truth regarding certain topics, causing people to believe that certain facts are “common sense” or “natural” (Charon, 102). The power of culture invites deviance in society. Especially places such as the United States where diversity is maintained, deviance causes many limitations on freedom. For example, if an individual is associated with a culture or a group that dislikes a specific type of race, then that individual is very highly likely to adopt the same views and dislike a certain race. Humans have a tendency to associate themselves with a larger group to feel as though they are a part of something that others are not. No person often strives to be secluded and, at times, even if the individual does not completely agree with the group’s views, they choose to stay just to feel included. Furthermore, groups such as religious communities are typically not joined by choice. Frequently, many people are born into a certain type of religion which significantly affects their life choices and also limits their range of knowledge. However, because religions tend to be innate, it is difficult to dissimilate and oppress due to many individuals being family-driven. When a culture is intertwined to something more deeply meaningful to the individual, it is more likely for them to choose based on emotion instead of logic.

With comparison to other socially organized countries, the United States indeed has freedom. The American citizens are given numerous rights under the laws established over hundreds of years ago. However, other civilized countries give more freedom with an exchange of less governmental benefits or vice versa. Although the solution to this freedom issue may be to give as much freedom to the citizens as possible, that is also not the case. If there were to be absolute total freedom in a society, it would not be civilized nor successful. Not all, but a great chunk of humans need to be told what to do and are born to follow rules. Without a regulated governing body, human life would be chaotic and many would be lost at finding a meaning to their life. Thus, as a country, we have resulted in finding ways to balance law and freedom. Not all countries strive for such goals and some have failed at reaching a balance between these two. However, it does not diminish the fact that a democratic country should not maintain justice among all civilians, respecting that an organized country needs people who will work to sustain a successful country. Americans are not as free as they would imagine in a utopian society and it is due to the influence of countless factors, whether controllable or uncontrollable. Complete freedom in a well-established country is, in fact, unattainable.

Freedom Must Be Demanded. (2021, Jul 01). Retrieved from https://papersowl.com/examples/freedom-must-be-demanded/

What Freedom Means to me

Should Freedom of Speech be Limited

On Freedom of Speech and Expression