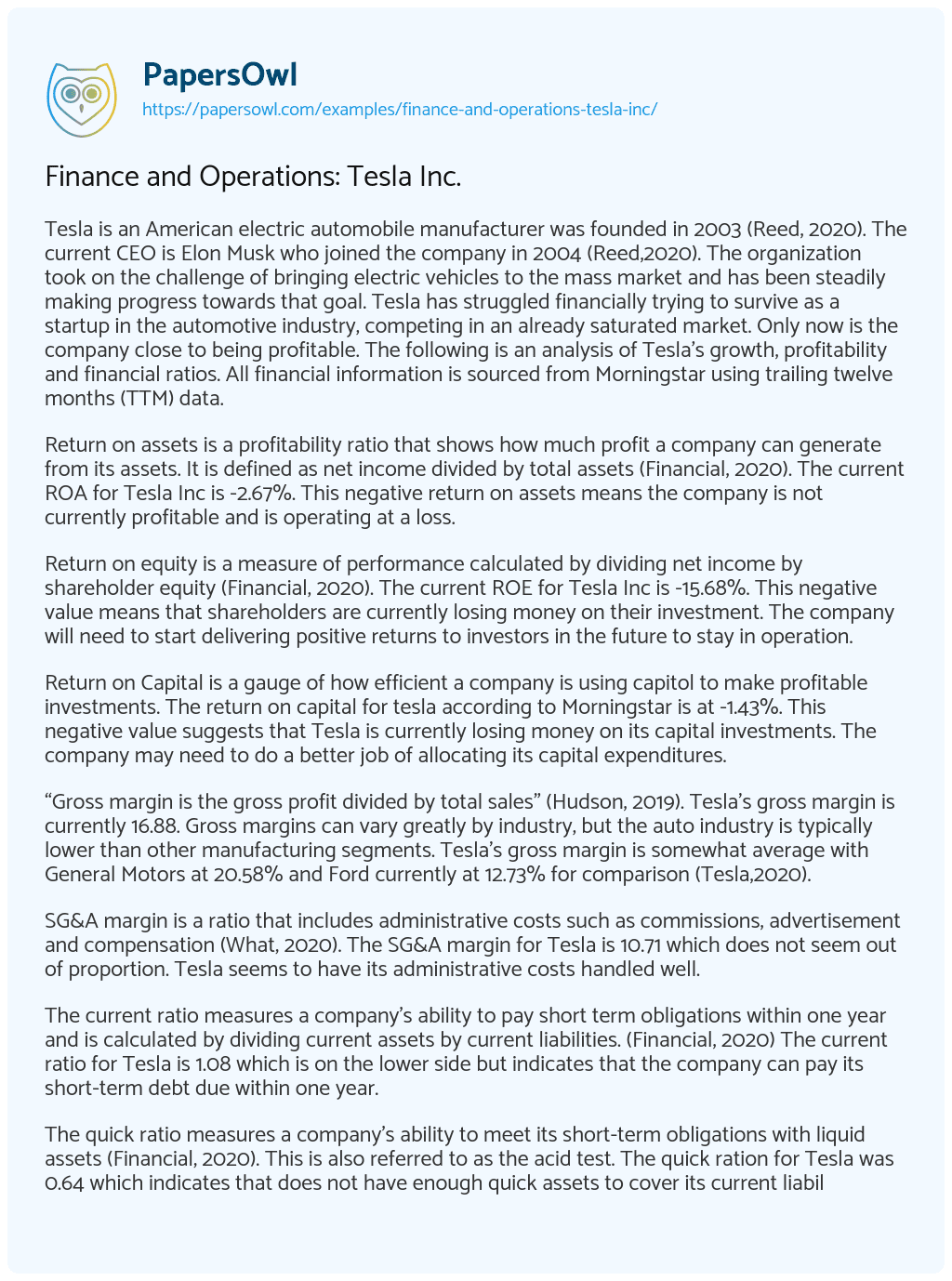 Tesla is an American electric automobile manufacturer was founded in 2003 (Reed, 2020). The current CEO is Elon Musk who joined the company in 2004 (Reed,2020). The organization took on the challenge of bringing electric vehicles to the mass market and has been steadily making progress towards that goal. Tesla has struggled financially trying to survive as a startup in the automotive industry, competing in an already saturated market. Only now is the company close to being profitable. The following is an analysis of Tesla’s growth, profitability and financial ratios. All financial information is sourced from Morningstar using trailing twelve months (TTM) data.

Return on assets is a profitability ratio that shows how much profit a company can generate from its assets. It is defined as net income divided by total assets (Financial, 2020). The current ROA for Tesla Inc is -2.67%. This negative return on assets means the company is not currently profitable and is operating at a loss.

Return on equity is a measure of performance calculated by dividing net income by shareholder equity (Financial, 2020). The current ROE for Tesla Inc is -15.68%. This negative value means that shareholders are currently losing money on their investment. The company will need to start delivering positive returns to investors in the future to stay in operation.

Return on Capital is a gauge of how efficient a company is using capitol to make profitable investments. The return on capital for tesla according to Morningstar is at -1.43%. This negative value suggests that Tesla is currently losing money on its capital investments. The company may need to do a better job of allocating its capital expenditures.

The quick ratio measures a company’s ability to meet its short-term obligations with liquid assets (Financial, 2020). This is also referred to as the acid test. The quick ration for Tesla was 0.64 which indicates that does not have enough quick assets to cover its current liabilities.

Total Debt/Equity is a metric that measures how much a company is financing through debt instead of equity and calculated by dividing a company’s total liabilities by its shareholder equity (Financial, 2020). Tesla’s current debt to equity ratio is 2.04 which can be considered high in some industries bit it quite average in the automotive manufacturing industry which has an average ratio of 2.5 (Mavrick,2020).

Total revenue is the total sales of all goods and services and is calculated by multiplying the quantity of goods by their price. Total revenue for Tesla is at 24,420B which is an impressive number for such a young automaker.

“Gross profit is sales minus cost of goods sold” (Hudson, 2019). Tesla’s Gross profit over the last 12 months is $4.120B. Tesla made a substantial amount of gross profit in 2019 which is positive, but this number is not necessarily an indicator that the company is profitable. Net profit would be a better indicator of profitability after subtracting operating expenses.

Whether Tesla Can be Triumphant or Just the Opposite?

Comparison of Amazon and Walmart Companies

Tesla Semi Truck is a New Product of Tesla Ink