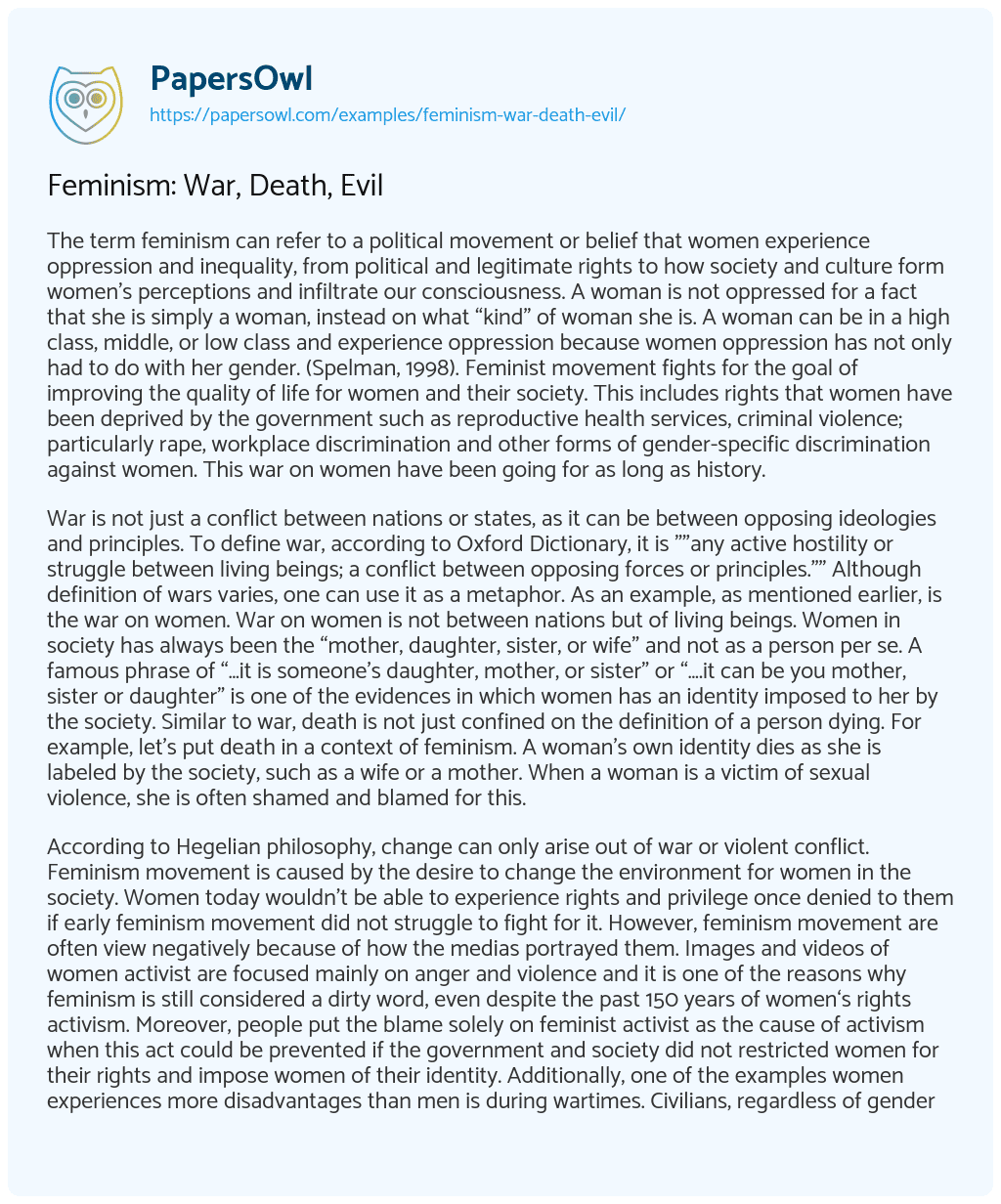 The term feminism can refer to a political movement or belief that women experience oppression and inequality, from political and legitimate rights to how society and culture form women’s perceptions and infiltrate our consciousness. A woman is not oppressed for a fact that she is simply a woman, instead on what “kind” of woman she is. A woman can be in a high class, middle, or low class and experience oppression because women oppression has not only had to do with her gender. (Spelman, 1998). Feminist movement fights for the goal of improving the quality of life for women and their society. This includes rights that women have been deprived by the government such as reproductive health services, criminal violence; particularly rape, workplace discrimination and other forms of gender-specific discrimination against women. This war on women have been going for as long as history.

War is not just a conflict between nations or states, as it can be between opposing ideologies and principles. To define war, according to Oxford Dictionary, it is “”any active hostility or struggle between living beings; a conflict between opposing forces or principles.”” Although definition of wars varies, one can use it as a metaphor. As an example, as mentioned earlier, is the war on women. War on women is not between nations but of living beings. Women in society has always been the “mother, daughter, sister, or wife” and not as a person per se. A famous phrase of “…it is someone’s daughter, mother, or sister” or “….it can be you mother, sister or daughter” is one of the evidences in which women has an identity imposed to her by the society. Similar to war, death is not just confined on the definition of a person dying. For example, let’s put death in a context of feminism. A woman’s own identity dies as she is labeled by the society, such as a wife or a mother. When a woman is a victim of sexual violence, she is often shamed and blamed for this.

According to Hegelian philosophy, change can only arise out of war or violent conflict. Feminism movement is caused by the desire to change the environment for women in the society. Women today wouldn’t be able to experience rights and privilege once denied to them if early feminism movement did not struggle to fight for it. However, feminism movement are often view negatively because of how the medias portrayed them. Images and videos of women activist are focused mainly on anger and violence and it is one of the reasons why feminism is still considered a dirty word, even despite the past 150 years of women‘s rights activism. Moreover, people put the blame solely on feminist activist as the cause of activism when this act could be prevented if the government and society did not restricted women for their rights and impose women of their identity. Additionally, one of the examples women experiences more disadvantages than men is during wartimes. Civilians, regardless of gender, suffer from human rights violations during war. However, women experience certain abuses and suffers more often than men in particular ways. Women are most likely to be subject of violence, especially sexual violence. In 2017, Duterte jokingly said that because he already declared war on Mindanao, soldiers can rape up to three women. Pankhurst (2015), explained that rape is used as a weapon or a trophy for soldiers during war. Moreover, Parashar (2015) state that women are viewed as “grieving wife and mothers, nurses and anti-war activist” but in reality, women actively fought in war since mid-nineteenth century and served different roles for numerous reasons. However, a man’s contribution on war is far more acknowledged than woman’s because war is always contextualized in a perspective of patriarchy.

Women are most likely to be subject of violence, especially sexual violence. Survivors of these kind of violence are put in a disadvantaged position by the society because of the stigma attached to it. In a way, women’s identity is killed as she no longer fits in the social construct of how and what a woman should be. On a book by Betty Friedan, The Feminine Mystique (1963), in which she stated that women are victims of a fallacy that needs them to seek out identity and meaning in their lives through their husbands and children. Death can be used as an existential experience. If feminism movement cease to exist, women’s voice will die.

Women viewed the patriarchal society as evil, as it excludes women from power and takes advantage from it. Women thus, in return fight for this. For some, feminism may be considered evil as it is all about female supremacy. However, this is just a misconception because the only evil thing about feminism is how women fight the immoral actions they experience from patriarchal society. From rape and harassment to slavery.

Calder, Todd, (2018), The Concept of Evil, The Stanford Encyclopedia of Philosophy. Retrieved from https://plato.stanford.edu/archives/fall2018/entries/concept-evil/

Feminism: Now and then