Fast Food is the Main Cause of Diabetes and Obesity 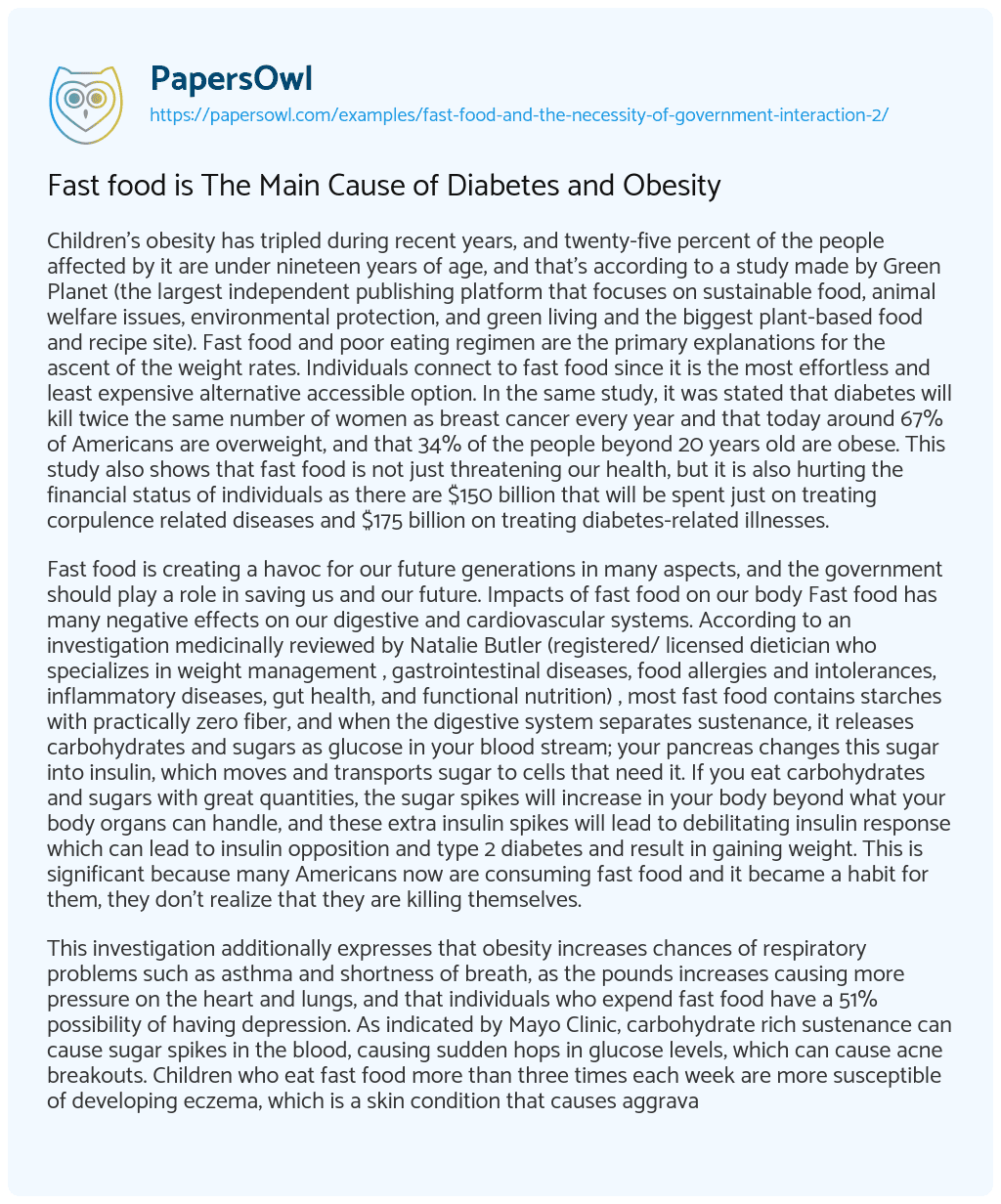 Children’s obesity has tripled during recent years, and twenty-five percent of the people affected by it are under nineteen years of age, and that’s according to a study made by Green Planet (the largest independent publishing platform that focuses on sustainable food, animal welfare issues, environmental protection, and green living and the biggest plant-based food and recipe site). Fast food and poor eating regimen are the primary explanations for the ascent of the weight rates. Individuals connect to fast food since it is the most effortless and least expensive alternative accessible option. In the same study, it was stated that diabetes will kill twice the same number of women as breast cancer every year and that today around 67% of Americans are overweight, and that 34% of the people beyond 20 years old are obese. This study also shows that fast food is not just threatening our health, but it is also hurting the financial status of individuals as there are $150 billion that will be spent just on treating corpulence related diseases and $175 billion on treating diabetes-related illnesses.

Fast food is creating a havoc for our future generations in many aspects, and the government should play a role in saving us and our future. Impacts of fast food on our body Fast food has many negative effects on our digestive and cardiovascular systems. According to an investigation medicinally reviewed by Natalie Butler (registered/ licensed dietician who specializes in weight management , gastrointestinal diseases, food allergies and intolerances, inflammatory diseases, gut health, and functional nutrition) , most fast food contains starches with practically zero fiber, and when the digestive system separates sustenance, it releases carbohydrates and sugars as glucose in your blood stream; your pancreas changes this sugar into insulin, which moves and transports sugar to cells that need it. If you eat carbohydrates and sugars with great quantities, the sugar spikes will increase in your body beyond what your body organs can handle, and these extra insulin spikes will lead to debilitating insulin response which can lead to insulin opposition and type 2 diabetes and result in gaining weight. This is significant because many Americans now are consuming fast food and it became a habit for them, they don’t realize that they are killing themselves.

This investigation additionally expresses that obesity increases chances of respiratory problems such as asthma and shortness of breath, as the pounds increases causing more pressure on the heart and lungs, and that individuals who expend fast food have a 51% possibility of having depression. As indicated by Mayo Clinic, carbohydrate rich sustenance can cause sugar spikes in the blood, causing sudden hops in glucose levels, which can cause acne breakouts. Children who eat fast food more than three times each week are more susceptible of developing eczema, which is a skin condition that causes aggravated patches of inflamed, itchy skin. Fast food contains many carbs and sugars, which increase acids in your mouth, causing the breakdown of tooth enamel, which then can lead to cavities and bacteria in your mouth. These dense sugars and carbs will eventually cause obesity, and obese individuals have a higher risk of breaking bones, while falling, as their bones are weaker than more healthy individuals, and this supports that obesity and fast food places many risks on the individuals and causes them to grow weaker, and lessens their body’s ability to protect them in times of danger or injuries. Effects on immunity and reproductive system Green Planet also states in the same study used previously that processed foods have some chemicals that can alter the way hormones act in your body, called phthalates. High levels of exposure to these chemicals could prompt birth issues, for example, birth defects(abnormalities).

As stated in an environmental nutrition study by Palmer, Sharon(an award-winning blogger, author, registered dietitian nutritionist, and plant-based food and nutrition expert) and in a recent National Institutes of Health survey of the science on the theme of the western eating routine and its impacts on our immunity demonstrates that the Western eating diet is colossal in sugar, sodium, and saturated fat; (which have a provocative inflammatory impact), and is low in omega-3s (which has a calming anti-inflammatory impact), this style of diet can be hazardous and could hurt our gut microbiota, which will debilitate the immune system. This can eventually lead to changes in the host environment, shifts in immune cell functions, and changes in nutrient accessibility for the gut microbiota, causing the immune response to weaken. Obesity additionally makes a provocative reaction that can dull the immune system’s ability to protect the body.

Even more frustrating is that mother’s eating habits can affect the gut microbiota of the unborn kid, causing the child to have an impaired immune system, which make the immune system vulnerable to infection, auto immune and allergic diseases, so this diet can affect our genes as well. Effects on animals and the planet According to another study made by Green Plant, most of the meat, dairy products, and eggs that are in fast food are produced by animals who live in factory farms, these animals are forced to endure many painful and merciless conditions, that range from being fed with hormones for growth, and these hormones cause mastitis (inflammation of the udder), to being slaughtered and killed and it’s all for gaining profit, while destroying the animals. Fast food also creates many dangers to the planet through packages of fast food, its transportation (causing pollution and climate change), and water contamination through hormones, drugs, fertilizers, and pathogens. Fast food is literally destroying every aspect in our life. Self- industry regulations won’t work A study made by Monique Potvin Kent, Jennifer R. Smith, Elise Pauzn and Mary L’Abbn from The International Journal of Behavioral Nutrition and Physical Activity. 15.1 (June 22, 2018) showed that self- industry regulations will not be a good solution to this problem, as many implementations concerning advertising fast food and unhealthy products to children were made, but they had very little effect after they have been observed for three years, and they were criticized for low participation, because as there were some companies trying to build, others continued to destroy, this shows an evidence that we need laws that apply on every one, and that we all need to work together and make some monetary sacrifices to save our future.

This study was made in Canada, but if it didn’t work there, it will not work in the USA, because the population of the USA is much larger than Canada’s population. Government should have some policies and restrictions concerning fast food, but their control should be limited in order not threaten the rights of the people to have a free will. If government gains too much control, they will eventually try to control everything. “Government should respect the voluntary choices made by individuals when it comes to their diets. The current path of government intervention is leading to greater restrictions on citizens’ freedoms that could eventually result in federal food”, this quote was stated by Daren Bakst (Senior Research Fellow in Agricultural Policy, studies and writes about property rights, and other issues), which represents the fear of the opposing opinion to this argument. Conclusion Fast food has many negative impacts on our future economically, health wise, and environmentally. The government should place some restrictions concerning fast food, as it became a threat to many Americans. The government’s role is to protect the people and the nation, and fast food is destroying both, and if we don’t take actions now, we will be like a deceased nation in the future, living to survive our diseases, havocking our future with our hands.

Fast food is The Main Cause of Diabetes and Obesity. (2020, Apr 04). Retrieved from https://papersowl.com/examples/fast-food-and-the-necessity-of-government-interaction-2/

Obesity is Fast Food the Leading Cause

The Relationship between Fast Food and Obesity

How are Fast Food Advertising and Childhood Obesity Related

Should Fast Food be Banned