Family Dysfunction in the Glass Menagerie 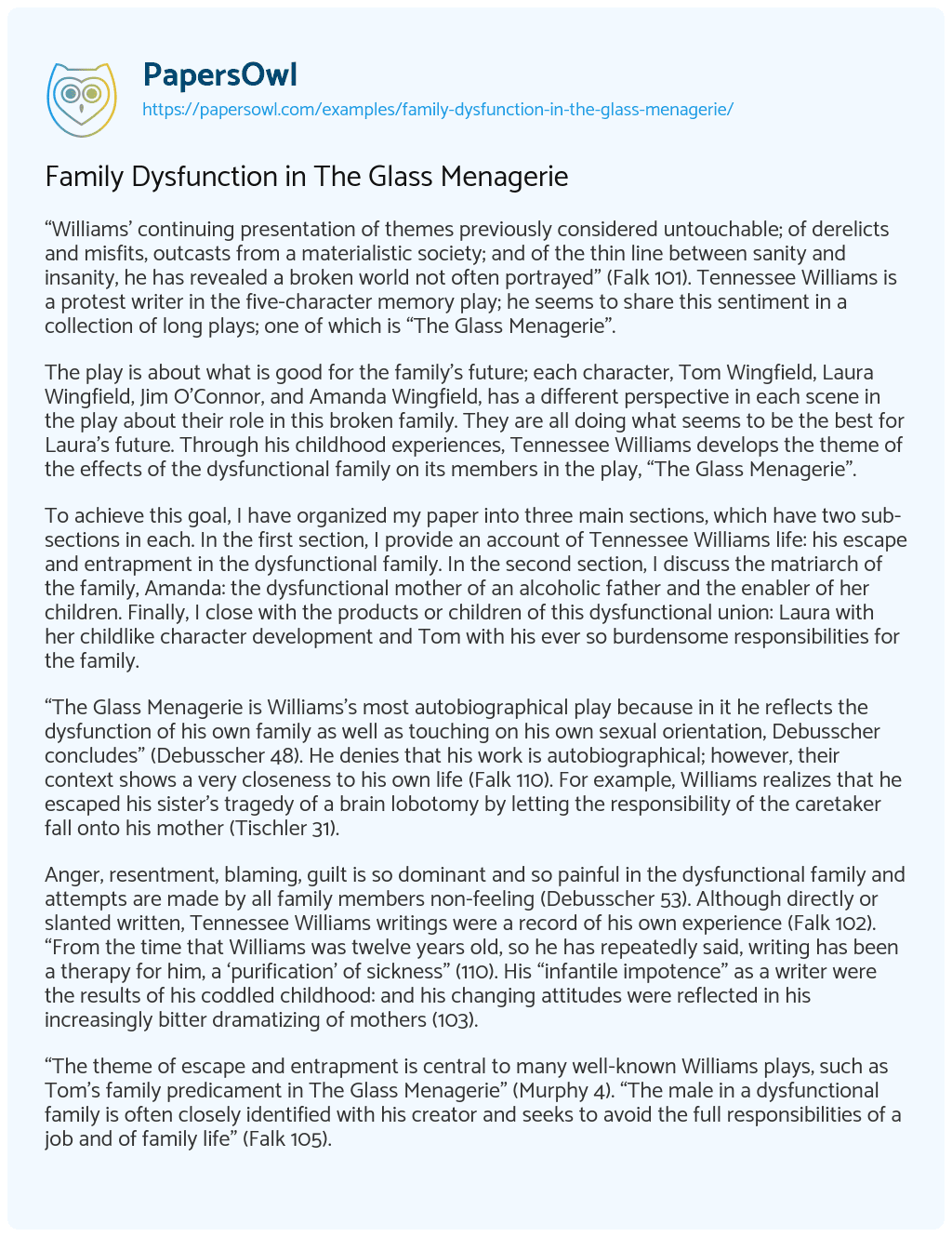 “Williams’ continuing presentation of themes previously considered untouchable; of derelicts and misfits, outcasts from a materialistic society; and of the thin line between sanity and insanity, he has revealed a broken world not often portrayed” (Falk 101). Tennessee Williams is a protest writer in the five-character memory play; he seems to share this sentiment in a collection of long plays; one of which is “The Glass Menagerie”.

The play is about what is good for the family’s future; each character, Tom Wingfield, Laura Wingfield, Jim O’Connor, and Amanda Wingfield, has a different perspective in each scene in the play about their role in this broken family. They are all doing what seems to be the best for Laura’s future. Through his childhood experiences, Tennessee Williams develops the theme of the effects of the dysfunctional family on its members in the play, “The Glass Menagerie”.

To achieve this goal, I have organized my paper into three main sections, which have two sub-sections in each. In the first section, I provide an account of Tennessee Williams life: his escape and entrapment in the dysfunctional family. In the second section, I discuss the matriarch of the family, Amanda: the dysfunctional mother of an alcoholic father and the enabler of her children. Finally, I close with the products or children of this dysfunctional union: Laura with her childlike character development and Tom with his ever so burdensome responsibilities for the family.

“The Glass Menagerie is Williams’s most autobiographical play because in it he reflects the dysfunction of his own family as well as touching on his own sexual orientation, Debusscher concludes” (Debusscher 48). He denies that his work is autobiographical; however, their context shows a very closeness to his own life (Falk 110). For example, Williams realizes that he escaped his sister’s tragedy of a brain lobotomy by letting the responsibility of the caretaker fall onto his mother (Tischler 31).

Anger, resentment, blaming, guilt is so dominant and so painful in the dysfunctional family and attempts are made by all family members non-feeling (Debusscher 53). Although directly or slanted written, Tennessee Williams writings were a record of his own experience (Falk 102). “From the time that Williams was twelve years old, so he has repeatedly said, writing has been a therapy for him, a ‘purification’ of sickness” (110). His “infantile impotence” as a writer were the results of his coddled childhood: and his changing attitudes were reflected in his increasingly bitter dramatizing of mothers (103).

“The theme of escape and entrapment is central to many well-known Williams plays, such as Tom’s family predicament in The Glass Menagerie” (Murphy 4). “The male in a dysfunctional family is often closely identified with his creator and seeks to avoid the full responsibilities of a job and of family life” (Falk 105). Normal character development is near to impossible for Williams (Falk 105). He was the sick emasculate son of an unhappily married couple (Teachout 59).

This applies to the artist pervades William’s career from beginning to end as the elusive hind (Murphy 5). This fugitive in The Glass Menagerie is Tom Wingfield who ran away from home and the shoe factory but could not forget Laura (Falk 105). Williams was also a wanderer and a loner (Tischler 30). “He understood why his father enjoyed drinking and playing poker and was distressed by the growing effeminacy of his son” (Falk 102).

“Are Tom Wingfield and his creator one and the same? Probably…” (Teachout 61). In dysfunctional families, emotions are repressed and twisted; they are either not shared or manipulated in a judgmental, blaming fashion (Debusscher 48). Moving to St. Louis in the 20s, and the Williams life became the raw material of “The Glass Menagerie” (Teachout 59). As stated previously, his father, boastful of his masculinity and unafraid of a confrontation, was a drinker and poker player (Falk 102-103).

Because of his father, Williams was always searching for some fulfillment and running from persecution by the majority which was sometimes imagined and sometimes real (Murphy 5). “In the earliest plays, he portrays sexual freedom as a kind of ‘redemption’ that is available only to women and in comic situations” (Falk 103-104). Most of the trapped characters in his plays live on the outskirts of society (Murphy 4-5). Disguised references to homosexuality or to an “attractive homosexual and an obnoxious “normal” character” are referred to in Williams early writings (Falk 104).

“The proprieties of his training and the unlimited freedom discovered in New Orleans perhaps helps to account for the extremes…” (103). The disease of alcoholism affects not only the victim but the whole family as well (Debusscher 48). “The common denominator of the alcoholic, the spouse, and the children is denial: the unwritten law of the alcoholic home is that there is no problem” (49). Alcoholism causes the entire family to make excuses, avoid the truth, and create fantasies for the alcoholic and his or her effects on the family (49).

“The stress even on the non-alcoholic parent is so severe that nothing is left for the child” (53). Emotional bonding is often lacking between parent and child. Children are emotionally crippled because healthy relationships are denied on postponed (53). “Amanda was aware that alcoholism is a pattern of family behavior that tends to be repeated by successive generations” (49). “Amanda reveals her deep-seated fears that Tom might become a drinker” (49).

“Amanda possesses the characteristics of the enabler. She engages in destructive rituals, primarily neurotic nagging” (Debusscher 50). “Dominating not only their eating habits but their entire lives, keeping them safely in the nest with her” (Tischout 33). “She displays the urge to control that is so common to the enabling spouse, she has a surplus of willpower to compensate for the lack of it in the drinker” (Debusscher 50). “She actually requires their submission to feed her own pride” (Tischler 33). “Amanda wanted to entertain graciously; she wanted meals to be formal experiences; grotesquely elegant costume mirrors her anachronistic dream” (31).

“Amanda was a victim of her own assumptions about how women should behave, spend their lives, whom they should marry, chores they should perform, should dress, entertain, and talk, she is a symbol of a dying civilization” (32). “Amanda expresses eloquently the humiliation of the deserted wife and the unmarried woman in the southern culture, and she fears that Laura with becoming a ‘front porch girl’” (31). “This American family reveals the perennial conflicts between individual needs and perceived obligations.

Laura’s future becomes the central obligation” (31). “She pushes Laura towards Jim, it is clear she has never paused to find out who her daughter really is, nor what her aspirations might be” (Debusscher 50). “Amanda is possessed by the overwhelming fear that Tom will follow in his father’s footsteps” (50). “In the Wingfield family, Laura is the lost child, and Tom is the responsible one” (Debusscher 50). “Subjected to one of the earliest and least expensive experiments in prefrontal lobotomy” (Falk 102). “She does have an inferiority complex, a common situation for children growing up in alcoholic homes. Her refuge is to escape from reality” (Debusscher52).

“In response to the distress in the family, these children, to survive, has to develop coping behaviors” (50). “Children use fantasy to survive chaos and pain. Children in dysfunctional homes frequently invent a private world that gives them a way to escape” (52). Laura is the gentle portrayal of a girl fixed forever in childhood. She plays with her glass animals and enjoys her victrola but is unable to cape with type-writers, offices, flirtations, and strangers” (Tischler 29). “The central work takes its name, is Laura’s glass menagerie” (33).

“Taking it as a symbol of Laura herself, fragile and beautiful, more specific figure of the unicorn” (33). “Jim accidentally breaks off its horn, not transformed it into a horse: a damaged unicorn” (33). “Thus, if we see the story from Tom’s point of view, this is the battle to survive. In order to behave like a good son potential as a poet, he must be a free man. But in order to behave like a good son and loving brother, he must remain in bondage” (Tischler 31). “Tom’s hunger for independence with the parallel pull of the family, the basic unit of our civilization” (30). “Common rule in the alcoholic home is ‘don’t be selfish’” (Debusscher 52).

“Children of alcoholics are heavily burdened by the responsibility of parenting, which usually falls on the older children” (52). “Tom, being the resident male and not physically handicapped, has shouldered this burden” (52). “he not addresses his own needs but sacrifice himself for the family” (52). “often such a child ultimately finds refuge, as an adolescent, in alcohol Tom has” (52).

“Tom’s refusal to abide by the meal rituals, and his reluctance to listen to the family saga reveal a rebelliousness, a refusal to conform, to pretend to be and act like the others, to suppress that otherness which nature has planted in him” (55). “Williams takes eared not to present Tom’s decision to abandon his family as either heroic or selfish” (60-61). “Tom is a solitary figure in the workplace where his favorite spot is a ‘cabinet of the washroom’, where people talk behind his back” (55).

“The warehouse is where I work, not where I know things about people” (56). “there is an unspoken code concerning privacy which he approves of, with the understanding that it also protects him against the unwelcome inquisitiveness of others about his marital plans…” (56). “he remains separate from his workmates who regard him first ‘with suspicious hostility’ and later with ‘a smile an oddly fashioned dog who trots across their path at some distance’” (55). “the nature of that ‘otherness’ in the early 1940s had to be presented on the surface as a poetic disposition at odds with the industrial surroundings, but homosexuality may be an equally plausible ground” (56).

“His sarcasm is aimed at the modes of courtship and marital arrangements of the heterosexual world” (55). “Tom’s need to hide his homosexuality from Laura, Amanda and Jim-and control the inner revolt which is the symptom of it” (54). “restlessness, impatience, swearwords, outbursts, drinking, final flight may all be symptoms of the bottled-up frustrations of the gay person in the straight-laced environment” (55). “he feels responsible, yet trapped deeply resentful” (52).

Family Dysfunction in The Glass Menagerie. (2019, Mar 23). Retrieved from https://papersowl.com/examples/family-dysfunction-in-the-glass-menagerie/