Evolution of the American Identity 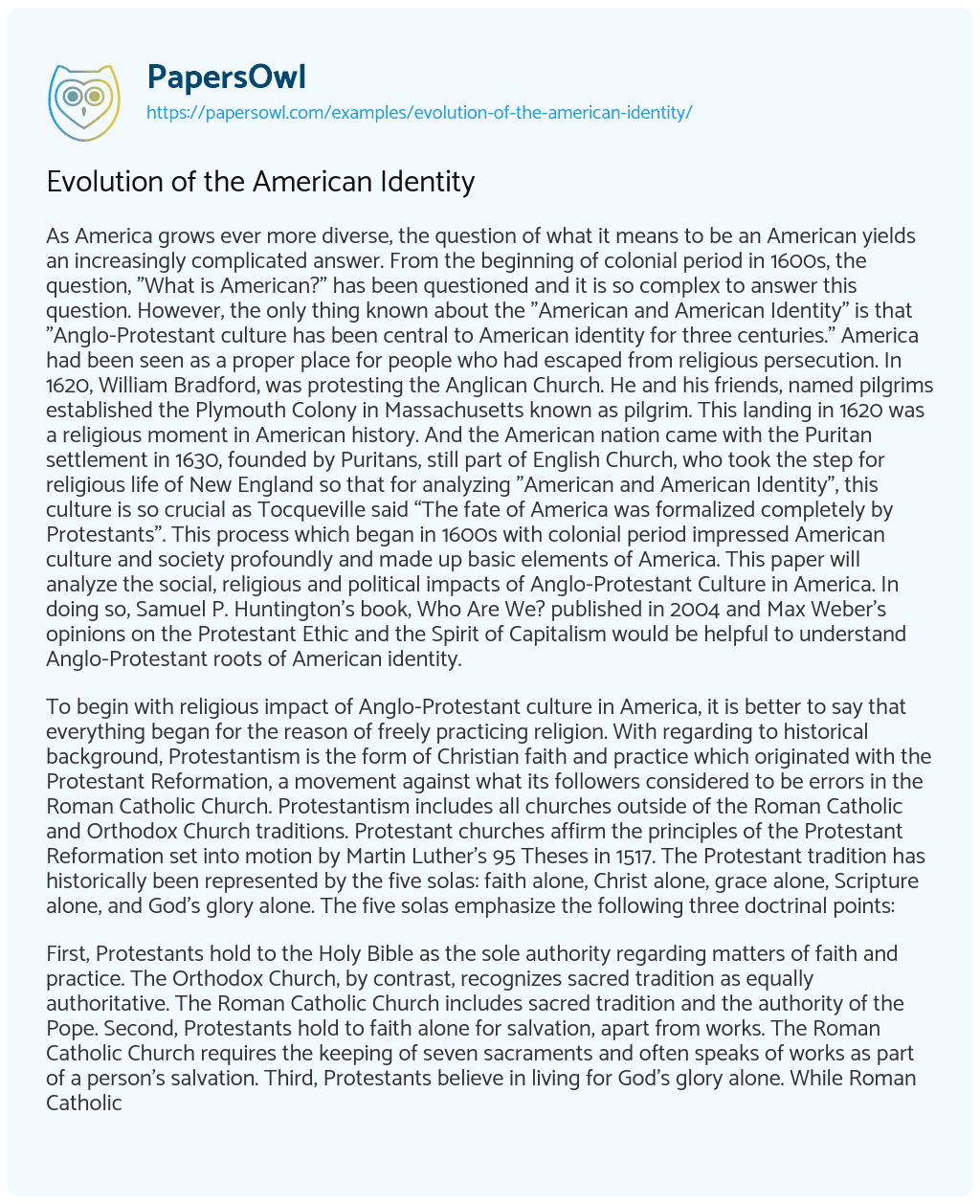 As America grows ever more diverse, the question of what it means to be an American yields an increasingly complicated answer. From the beginning of colonial period in 1600s, the question, “What is American?” has been questioned and it is so complex to answer this question. However, the only thing known about the “American and American Identity” is that “Anglo-Protestant culture has been central to American identity for three centuries.” America had been seen as a proper place for people who had escaped from religious persecution. In 1620, William Bradford, was protesting the Anglican Church. He and his friends, named pilgrims established the Plymouth Colony in Massachusetts known as pilgrim. This landing in 1620 was a religious moment in American history. And the American nation came with the Puritan settlement in 1630, founded by Puritans, still part of English Church, who took the step for religious life of New England so that for analyzing “American and American Identity”, this culture is so crucial as Tocqueville said “The fate of America was formalized completely by Protestants”. This process which began in 1600s with colonial period impressed American culture and society profoundly and made up basic elements of America. This paper will analyze the social, religious and political impacts of Anglo-Protestant Culture in America. In doing so, Samuel P. Huntington’s book, Who Are We? published in 2004 and Max Weber’s opinions on the Protestant Ethic and the Spirit of Capitalism would be helpful to understand Anglo-Protestant roots of American identity.

To begin with religious impact of Anglo-Protestant culture in America, it is better to say that everything began for the reason of freely practicing religion. With regarding to historical background, Protestantism is the form of Christian faith and practice which originated with the Protestant Reformation, a movement against what its followers considered to be errors in the Roman Catholic Church. Protestantism includes all churches outside of the Roman Catholic and Orthodox Church traditions. Protestant churches affirm the principles of the Protestant Reformation set into motion by Martin Luther’s 95 Theses in 1517. The Protestant tradition has historically been represented by the five solas: faith alone, Christ alone, grace alone, Scripture alone, and God’s glory alone. The five solas emphasize the following three doctrinal points:

First, Protestants hold to the Holy Bible as the sole authority regarding matters of faith and practice. The Orthodox Church, by contrast, recognizes sacred tradition as equally authoritative. The Roman Catholic Church includes sacred tradition and the authority of the Pope. Second, Protestants hold to faith alone for salvation, apart from works. The Roman Catholic Church requires the keeping of seven sacraments and often speaks of works as part of a person’s salvation. Third, Protestants believe in living for God’s glory alone. While Roman Catholic teaching agrees with this belief, it is often expressed in conjunction with faithful obedience to the Church and its leaders.

Today, approximately 800 million protestant people seeking to worship God under the authority of Scripture, believing in salvation by faith alone, and honoring the priesthood of every born-again person. So that it can be clearly concluded that Protestants made radical changes in way of practicing religion and it can be said that it has been lasted so far.

Also, it can be said that Protestant culture created a religious society in America. Some features of Protestant culture such as worldly asceticism created religious society in America. Worldly asceticism was characterized by Max Weber in Economy and Society as the concentration of human behavior upon activities leading to salvation within the context of the everyday world. People began to give more importance activities and for the sake of salvation and welfare in the world. While people pulled their religious responsibilities, they reached welfare such as richness, being working hard in the world. Thanks to these features of Protestant culture, the society became more religious than it should be so that AngloProtestant Culture is very important to understand American identity.

Another religious impact of Anglo-Protestant Culture is the congregations. In the book, Who Are We, Samuel P. Huntington claims that disagreement in Protestantism in time helped to formation of congregations such as Methodism, Baptism and Pietism. Although many disagreements occurred in Protestantism, the terms of salvation by fate, Gods Glory and individual responsibility didn’t lose their basic meaning. In time, some movements such as meetings at homes or churches occurred and gradually increased. And the congregations increased their power in time and had a voice in the government and economy of America.

Evolution of the American Identity. (2022, Nov 16). Retrieved from https://papersowl.com/examples/evolution-of-the-american-identity/