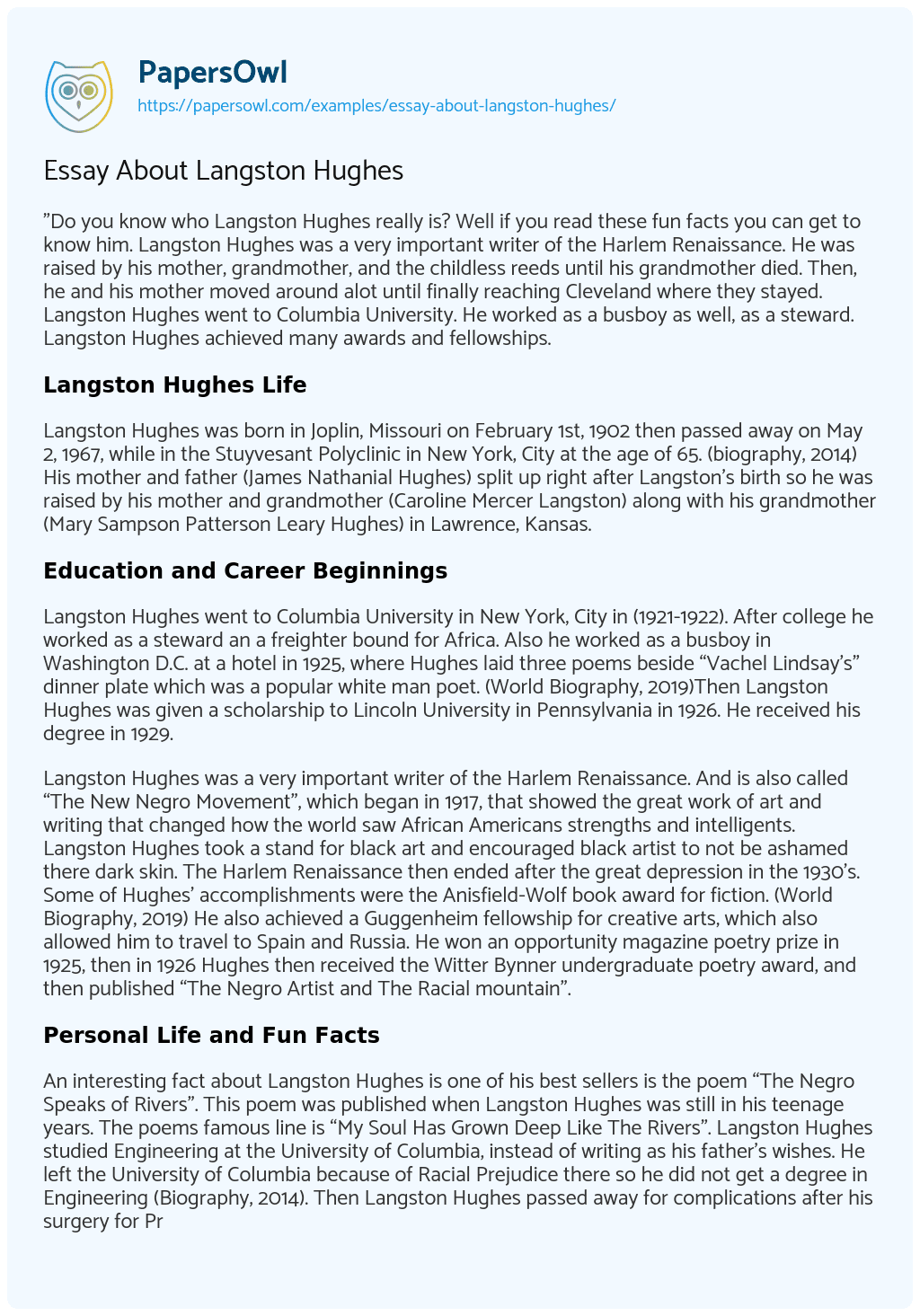 “Do you know who Langston Hughes really is? Well if you read these fun facts you can get to know him. Langston Hughes was a very important writer of the Harlem Renaissance. He was raised by his mother, grandmother, and the childless reeds until his grandmother died. Then, he and his mother moved around alot until finally reaching Cleveland where they stayed. Langston Hughes went to Columbia University. He worked as a busboy as well, as a steward. Langston Hughes achieved many awards and fellowships.

Langston Hughes was born in Joplin, Missouri on February 1st, 1902 then passed away on May 2, 1967, while in the Stuyvesant Polyclinic in New York, City at the age of 65. (biography, 2014) His mother and father (James Nathanial Hughes) split up right after Langston’s birth so he was raised by his mother and grandmother (Caroline Mercer Langston) along with his grandmother (Mary Sampson Patterson Leary Hughes) in Lawrence, Kansas.

Langston Hughes went to Columbia University in New York, City in (1921-1922). After college he worked as a steward an a freighter bound for Africa. Also he worked as a busboy in Washington D.C. at a hotel in 1925, where Hughes laid three poems beside “Vachel Lindsay’s” dinner plate which was a popular white man poet. (World Biography, 2019)Then Langston Hughes was given a scholarship to Lincoln University in Pennsylvania in 1926. He received his degree in 1929.

Langston Hughes was a very important writer of the Harlem Renaissance. And is also called “The New Negro Movement”, which began in 1917, that showed the great work of art and writing that changed how the world saw African Americans strengths and intelligents. Langston Hughes took a stand for black art and encouraged black artist to not be ashamed there dark skin. The Harlem Renaissance then ended after the great depression in the 1930’s. Some of Hughes’ accomplishments were the Anisfield-Wolf book award for fiction. (World Biography, 2019) He also achieved a Guggenheim fellowship for creative arts, which also allowed him to travel to Spain and Russia. He won an opportunity magazine poetry prize in 1925, then in 1926 Hughes then received the Witter Bynner undergraduate poetry award, and then published “The Negro Artist and The Racial mountain”.

An interesting fact about Langston Hughes is one of his best sellers is the poem “The Negro Speaks of Rivers”. This poem was published when Langston Hughes was still in his teenage years. The poems famous line is “My Soul Has Grown Deep Like The Rivers”. Langston Hughes studied Engineering at the University of Columbia, instead of writing as his father’s wishes. He left the University of Columbia because of Racial Prejudice there so he did not get a degree in Engineering (Biography, 2014). Then Langston Hughes passed away for complications after his surgery for Prostate Cancer. After he passed away they put his ashes beneath the floor Medallion in the Center of the hall in the Schomburg Center for the Research in Black Culture in Harlem. Langston Hughes was homosexual, so he never married. He then wrote the book “Blessed Assurance” that dealt with with his father being upset about his son’s sexuality, some people thought he may have put homosexual codes in many of his poems, including “Walt Whitman”.

Why Langston Hughes is Important to me?

Langston Hughes is important to me because he stood up for black artist, so I can read black poetry, books, to also be able to see great art, and ETC. He helped change how the world saw African Americans, to make them realize that African Americans have intelligence and talent just as great as everyone else in the world. So he helped me have the opportunity to become a black artist if i choose to.

In Conclusion, Langston Hughes did many great things on his journey from Joplin, Missouri to Cleveland to Washington D.C. then finally to New York, City. Even through his struggles of him being homosexual and being African American he accomplished a lot of things in his life that brought him and other African American artist to the surface. One of his quotes is “ Perhaps the mission of an artist is to interpret beauty to people-the beauty within themselves.”, I put this quote in my paper because, some white people still think black artist aren’t talented like them and that black artists’ artwork isn’t nowhere near how good there’s is.”