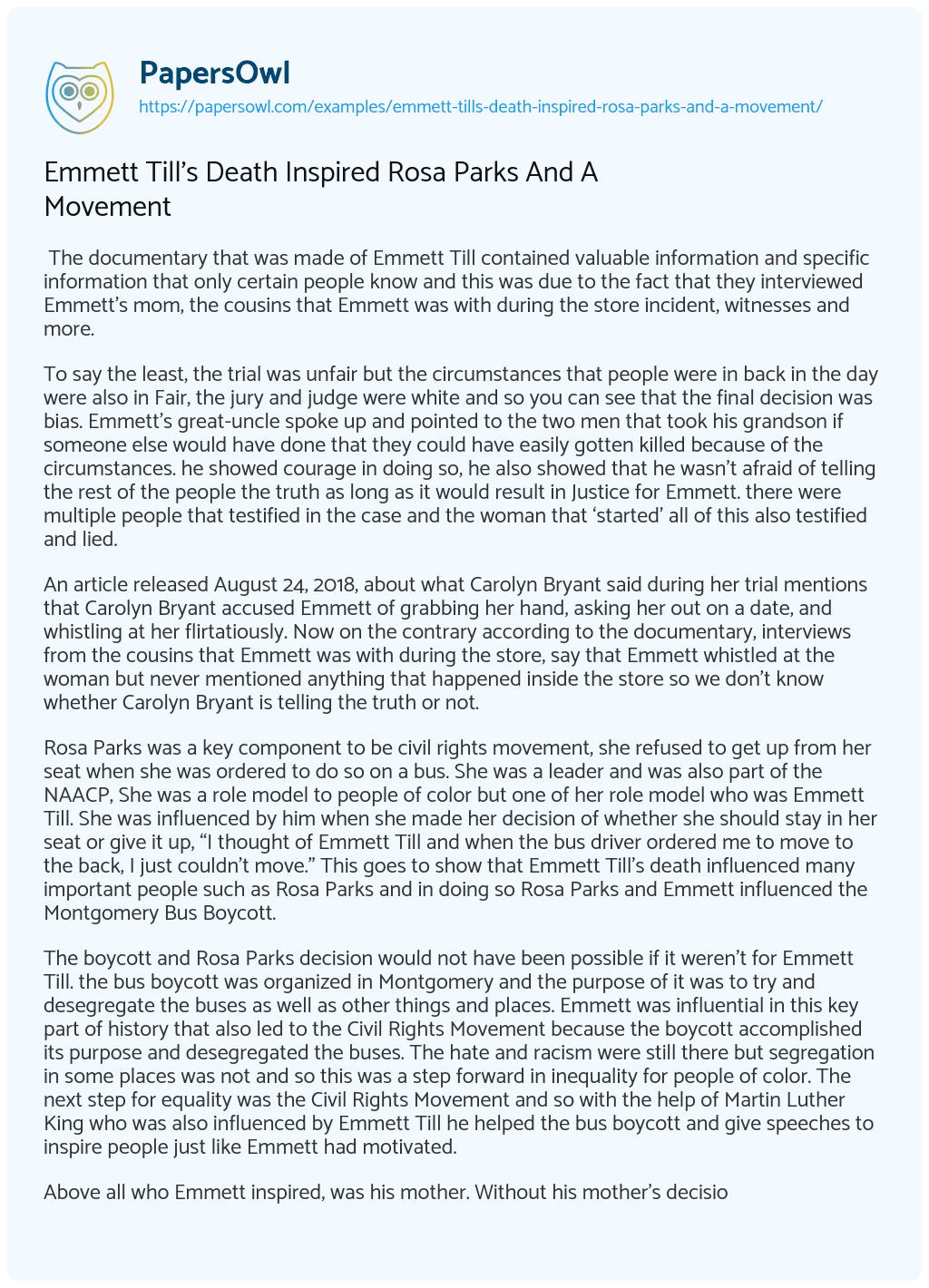 The documentary that was made of Emmett Till contained valuable information and specific information that only certain people know and this was due to the fact that they interviewed Emmett’s mom, the cousins that Emmett was with during the store incident, witnesses and more.

To say the least, the trial was unfair but the circumstances that people were in back in the day were also in Fair, the jury and judge were white and so you can see that the final decision was bias. Emmett’s great-uncle spoke up and pointed to the two men that took his grandson if someone else would have done that they could have easily gotten killed because of the circumstances. he showed courage in doing so, he also showed that he wasn’t afraid of telling the rest of the people the truth as long as it would result in Justice for Emmett. there were multiple people that testified in the case and the woman that ‘started’ all of this also testified and lied.

An article released August 24, 2018, about what Carolyn Bryant said during her trial mentions that Carolyn Bryant accused Emmett of grabbing her hand, asking her out on a date, and whistling at her flirtatiously. Now on the contrary according to the documentary, interviews from the cousins that Emmett was with during the store, say that Emmett whistled at the woman but never mentioned anything that happened inside the store so we don’t know whether Carolyn Bryant is telling the truth or not.

Rosa Parks was a key component to be civil rights movement, she refused to get up from her seat when she was ordered to do so on a bus. She was a leader and was also part of the NAACP, She was a role model to people of color but one of her role model who was Emmett Till. She was influenced by him when she made her decision of whether she should stay in her seat or give it up, “I thought of Emmett Till and when the bus driver ordered me to move to the back, I just couldn’t move.” This goes to show that Emmett Till’s death influenced many important people such as Rosa Parks and in doing so Rosa Parks and Emmett influenced the Montgomery Bus Boycott.

The boycott and Rosa Parks decision would not have been possible if it weren’t for Emmett Till. the bus boycott was organized in Montgomery and the purpose of it was to try and desegregate the buses as well as other things and places. Emmett was influential in this key part of history that also led to the Civil Rights Movement because the boycott accomplished its purpose and desegregated the buses. The hate and racism were still there but segregation in some places was not and so this was a step forward in inequality for people of color. The next step for equality was the Civil Rights Movement and so with the help of Martin Luther King who was also influenced by Emmett Till he helped the bus boycott and give speeches to inspire people just like Emmett had motivated.

Above all who Emmett inspired, was his mother. Without his mother’s decision to leave his casket open, the world might have not seen his body. She wanted the world to see what she saw because she did not see her son. (the details are from the Emmett Till documentary) Mamie Till was forbidden to open the casket but with her fight and arguments, she got it opened. According to Mamie Till, “ When I first saw that box, I just collapsed.” Imagine having to see your child so young in a casket unrecognizable. Not only was he unrecognizable but the smell his body gave off almost knocked out Mamie Till 4 blocks from the funeral home.

She saw her son’s body close to decapitated, his tongue had been choked out and was lying on his chin, his eye was gone and the other was hanging on his cheek, the top of his nose was smashed in as if someone got a meat beater and beat him with it, Mamie adored her son’s smile so when she checked his teeth she only saw two. She then noticed that his ear was gone and next to his ear sunlight was shining through a bullet hole. Not only was that enough for her to bare but her son’s private was chopped and so was half of his head, they split Emmett’s front and back of his head. How could people be so cruel to a young boy who was just barely starting to live his life, inhumane is not the correct word to use here because it’s far worse than that.

After seeing her son’s body, she decided to let the rest of the world know what those men had done to her child, she wanted people to wake up and do something. Mamie Till made America deal with the racism in America, she woke people up and shook an entire nation and all she did was have an open casket. She made sure that racism, lynching, hatred and more act of violence towards African Americans were seen instead of going unnoticed. Imagine if the casket had been closed nobody would have known who Emmett Till was, nobody would have any regard for his life besides his own family. He would’ve been another African-American murdered by a white person but instead, he was acknowledged. For this reason, the nation of America woke up and was socially Changed by both Emmett Till and Mamie Till.

Emmett Till's Death Inspired Rosa Parks And A Movement. (2021, May 25). Retrieved from https://papersowl.com/examples/emmett-tills-death-inspired-rosa-parks-and-a-movement/