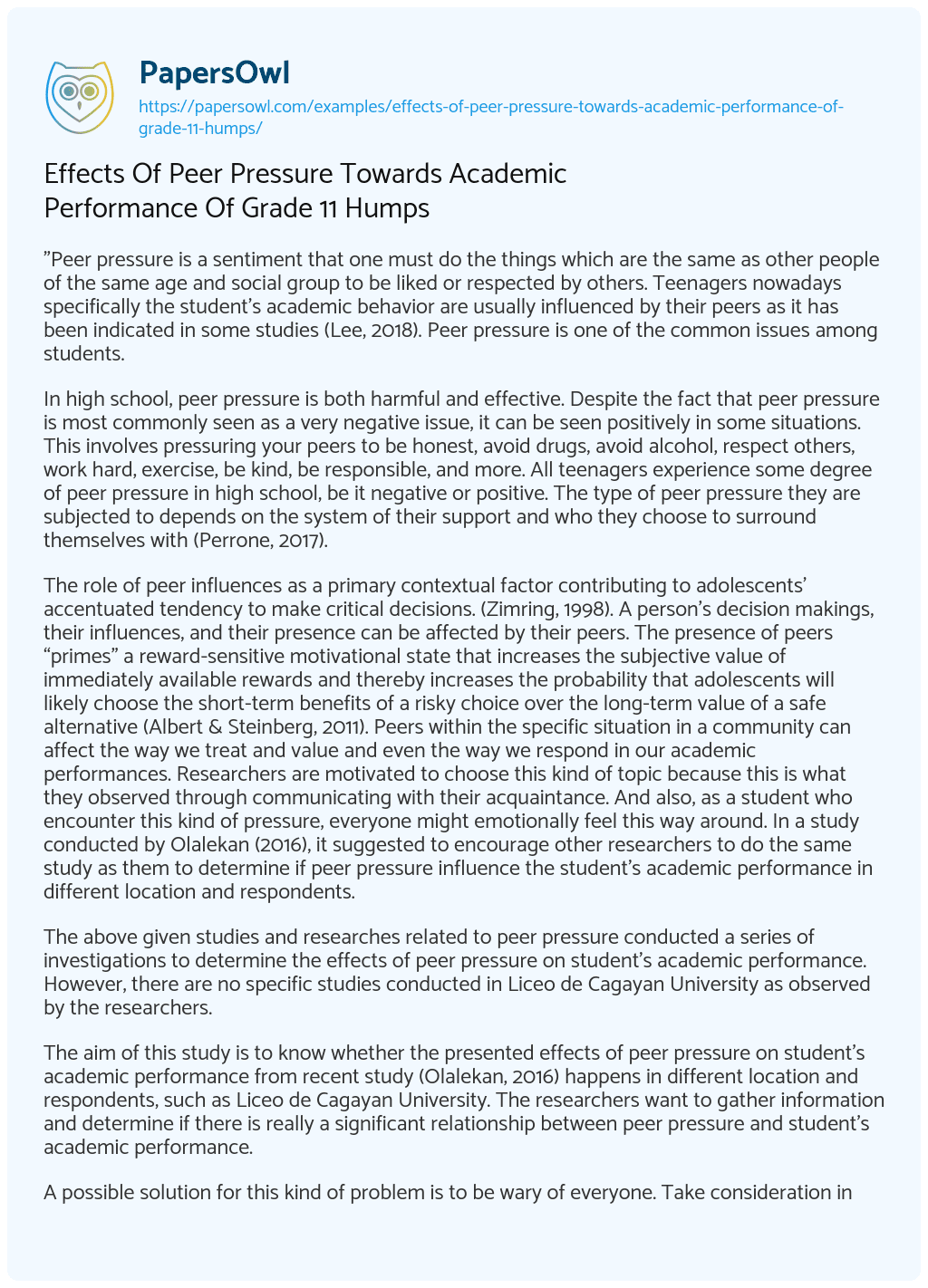 “Peer pressure is a sentiment that one must do the things which are the same as other people of the same age and social group to be liked or respected by others. Teenagers nowadays specifically the student’s academic behavior are usually influenced by their peers as it has been indicated in some studies (Lee, 2018). Peer pressure is one of the common issues among students.

In high school, peer pressure is both harmful and effective. Despite the fact that peer pressure is most commonly seen as a very negative issue, it can be seen positively in some situations. This involves pressuring your peers to be honest, avoid drugs, avoid alcohol, respect others, work hard, exercise, be kind, be responsible, and more. All teenagers experience some degree of peer pressure in high school, be it negative or positive. The type of peer pressure they are subjected to depends on the system of their support and who they choose to surround themselves with (Perrone, 2017).

The role of peer influences as a primary contextual factor contributing to adolescents’ accentuated tendency to make critical decisions. (Zimring, 1998). A person’s decision makings, their influences, and their presence can be affected by their peers. The presence of peers “primes” a reward-sensitive motivational state that increases the subjective value of immediately available rewards and thereby increases the probability that adolescents will likely choose the short-term benefits of a risky choice over the long-term value of a safe alternative (Albert & Steinberg, 2011). Peers within the specific situation in a community can affect the way we treat and value and even the way we respond in our academic performances. Researchers are motivated to choose this kind of topic because this is what they observed through communicating with their acquaintance. And also, as a student who encounter this kind of pressure, everyone might emotionally feel this way around. In a study conducted by Olalekan (2016), it suggested to encourage other researchers to do the same study as them to determine if peer pressure influence the student’s academic performance in different location and respondents.

The above given studies and researches related to peer pressure conducted a series of investigations to determine the effects of peer pressure on student’s academic performance. However, there are no specific studies conducted in Liceo de Cagayan University as observed by the researchers.

The aim of this study is to know whether the presented effects of peer pressure on student’s academic performance from recent study (Olalekan, 2016) happens in different location and respondents, such as Liceo de Cagayan University. The researchers want to gather information and determine if there is really a significant relationship between peer pressure and student’s academic performance.

A possible solution for this kind of problem is to be wary of everyone. Take consideration in choosing people who others want to be on their side always. Being careful in befriending people can also be a solution which is possible for this problem.

This study will use Symbolic Interactionism. In Symbolic Interactionism, human beings are endowed with the capacity for thought which helps them to distinguish right from wrong (Blumer, 1990). It is a major theoretical perspective in North American sociological social psychology that studies how individuals actively define their social reality and understand themselves by interacting with others. American sociologist and pragmatist philosopher George Herbert Mead (1863-1931), generally identified as the founder of the said theory, although the term symbolic interactionism was actually coined by Mead’s student, Herbert Blumer, who formally articulated Mead’s ideas following his death.

Mead argued that people engage in role taking, which is imaginatively assuming the point of view of others and observing their own behavior from this other perspective. Mead believed that through such symbolic interaction, humans cease being puppets controlled by environmental strings and, instead, become ‘coactors’ who have control in creating their social reality (Mead, 1934).

It is also a result of interaction of individuals which brings action for different networks of relationships. It can affect the process of decision making as there are symbols and the meanings that are internalized when you socialized with other people because through it you can learn the meanings and symbols of their action that allow people to carry on distinctively. This clearly indicates that when exposed to a different environmental setting in terms of interaction there are traits that are adopted and this is reflected by the University of Symbols. People can modify and alter the meanings and symbols that they use in action and interaction on the basis of their interpretation of the situation.

Peer Pressure, what you could do Essay