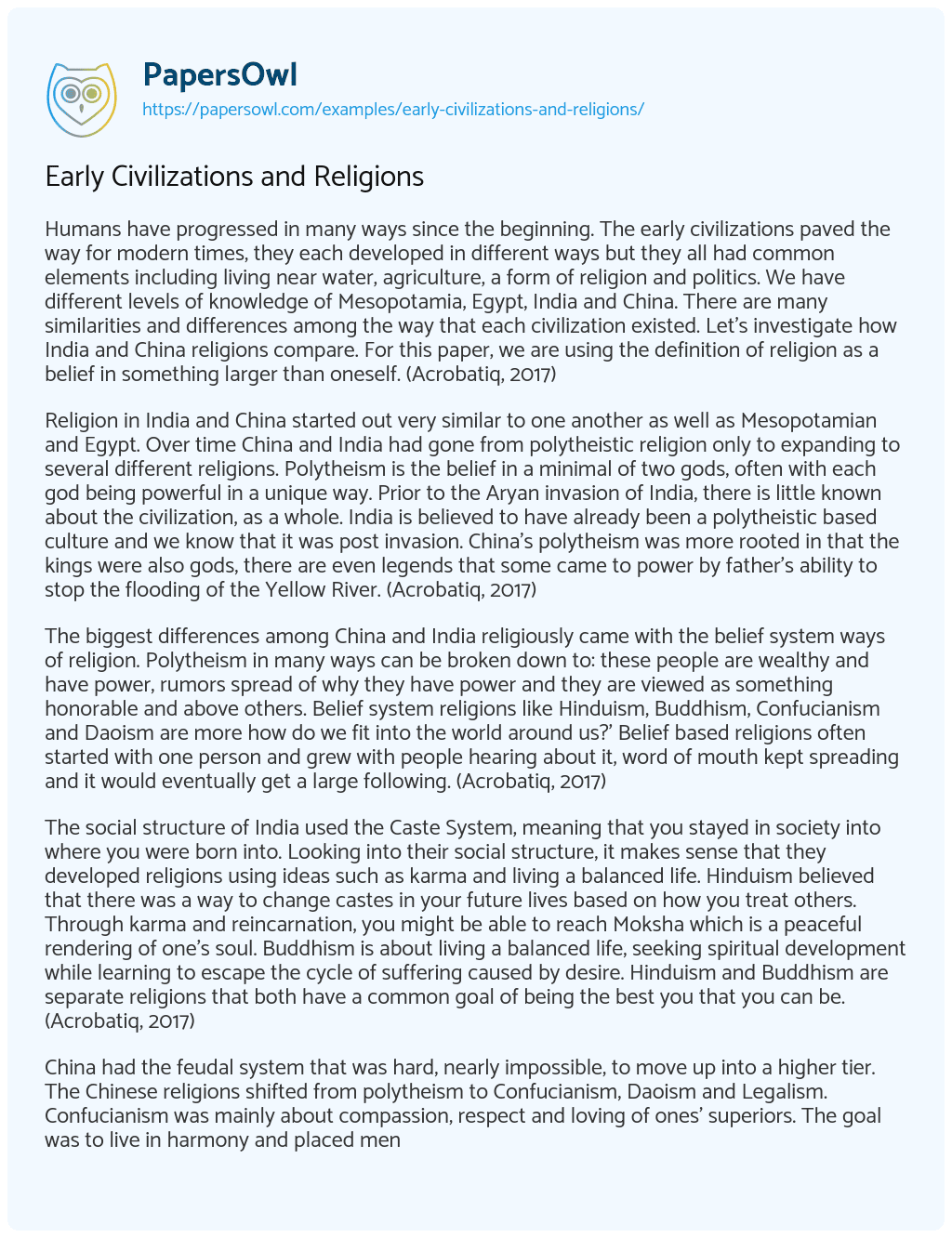 Humans have progressed in many ways since the beginning. The early civilizations paved the way for modern times, they each developed in different ways but they all had common elements including living near water, agriculture, a form of religion and politics. We have different levels of knowledge of Mesopotamia, Egypt, India and China. There are many similarities and differences among the way that each civilization existed. Let’s investigate how India and China religions compare. For this paper, we are using the definition of religion as a belief in something larger than oneself. (Acrobatiq, 2017)

Religion in India and China started out very similar to one another as well as Mesopotamian and Egypt. Over time China and India had gone from polytheistic religion only to expanding to several different religions. Polytheism is the belief in a minimal of two gods, often with each god being powerful in a unique way. Prior to the Aryan invasion of India, there is little known about the civilization, as a whole. India is believed to have already been a polytheistic based culture and we know that it was post invasion. China’s polytheism was more rooted in that the kings were also gods, there are even legends that some came to power by father’s ability to stop the flooding of the Yellow River. (Acrobatiq, 2017)

The biggest differences among China and India religiously came with the belief system ways of religion. Polytheism in many ways can be broken down to: these people are wealthy and have power, rumors spread of why they have power and they are viewed as something honorable and above others. Belief system religions like Hinduism, Buddhism, Confucianism and Daoism are more how do we fit into the world around us?’ Belief based religions often started with one person and grew with people hearing about it, word of mouth kept spreading and it would eventually get a large following. (Acrobatiq, 2017)

The social structure of India used the Caste System, meaning that you stayed in society into where you were born into. Looking into their social structure, it makes sense that they developed religions using ideas such as karma and living a balanced life. Hinduism believed that there was a way to change castes in your future lives based on how you treat others. Through karma and reincarnation, you might be able to reach Moksha which is a peaceful rendering of one’s soul. Buddhism is about living a balanced life, seeking spiritual development while learning to escape the cycle of suffering caused by desire. Hinduism and Buddhism are separate religions that both have a common goal of being the best you that you can be. (Acrobatiq, 2017)

China had the feudal system that was hard, nearly impossible, to move up into a higher tier. The Chinese religions shifted from polytheism to Confucianism, Daoism and Legalism. Confucianism was mainly about compassion, respect and loving of ones’ superiors. The goal was to live in harmony and placed men as the head or superior above the others. Daoism was less people focused and instead focused on nature. We should accept the natural orders of the universe and live in harmony. Legalism, on the other hand, believed that humans are corrupt requiring strict laws and discipline. These were all their own separate religions with different ideas people went with what they agreed with the most. (Acrobatiq, 2017)

China and India started out having a similar religion of being polytheistic and grew apart, even within the civilization. Belief base religions grew, and people went and found what they most agreed with instead of following what they had always been told. The civilizations had unique religions inside of themselves and compared to each other. Each religion was unique with its own unique set of beliefs and struggles. (Acrobatiq, 2017)

Early Civilizations and Religions. (2019, May 19). Retrieved from https://papersowl.com/examples/early-civilizations-and-religions/

Religion Impact on Many Civilizations