Early Child Marriage and its Existence in Societies 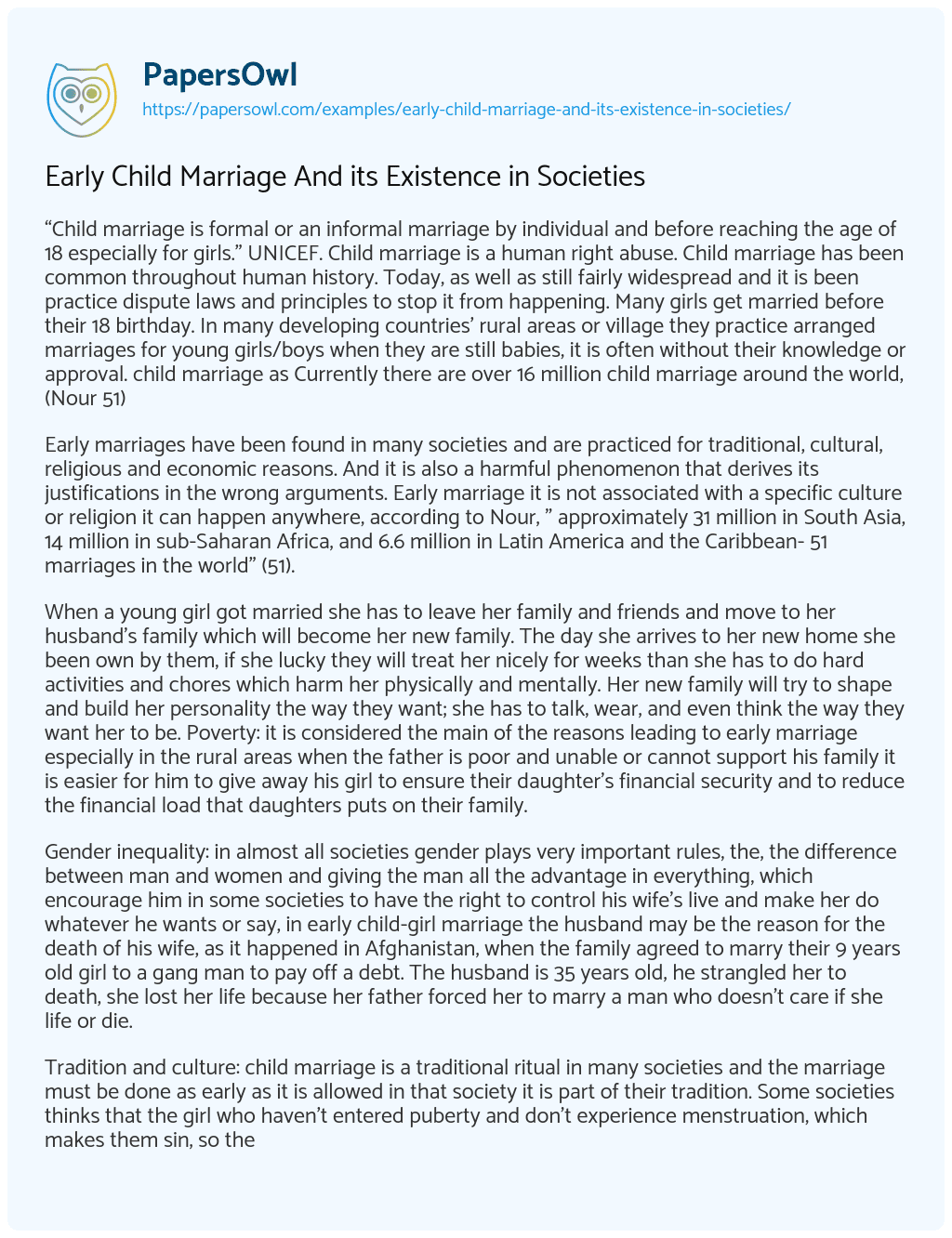 “Child marriage is formal or an informal marriage by individual and before reaching the age of 18 especially for girls.” UNICEF. Child marriage is a human right abuse. Child marriage has been common throughout human history. Today, as well as still fairly widespread and it is been practice dispute laws and principles to stop it from happening. Many girls get married before their 18 birthday. In many developing countries’ rural areas or village they practice arranged marriages for young girls/boys when they are still babies, it is often without their knowledge or approval. child marriage as Currently there are over 16 million child marriage around the world, (Nour 51)

Early marriages have been found in many societies and are practiced for traditional, cultural, religious and economic reasons. And it is also a harmful phenomenon that derives its justifications in the wrong arguments. Early marriage it is not associated with a specific culture or religion it can happen anywhere, according to Nour, ” approximately 31 million in South Asia, 14 million in sub-Saharan Africa, and 6.6 million in Latin America and the Caribbean- 51 marriages in the world” (51).

When a young girl got married she has to leave her family and friends and move to her husband’s family which will become her new family. The day she arrives to her new home she been own by them, if she lucky they will treat her nicely for weeks than she has to do hard activities and chores which harm her physically and mentally. Her new family will try to shape and build her personality the way they want; she has to talk, wear, and even think the way they want her to be. Poverty: it is considered the main of the reasons leading to early marriage especially in the rural areas when the father is poor and unable or cannot support his family it is easier for him to give away his girl to ensure their daughter’s financial security and to reduce the financial load that daughters puts on their family.

Gender inequality: in almost all societies gender plays very important rules, the, the difference between man and women and giving the man all the advantage in everything, which encourage him in some societies to have the right to control his wife’s live and make her do whatever he wants or say, in early child-girl marriage the husband may be the reason for the death of his wife, as it happened in Afghanistan, when the family agreed to marry their 9 years old girl to a gang man to pay off a debt. The husband is 35 years old, he strangled her to death, she lost her life because her father forced her to marry a man who doesn’t care if she life or die.

Tradition and culture: child marriage is a traditional ritual in many societies and the marriage must be done as early as it is allowed in that society it is part of their tradition. Some societies thinks that the girl who haven’t entered puberty and don’t experience menstruation, which makes them sin, so the must get married before menstruation begins to make her avoid sin.

Fear and threats: One of the causes of the marriage of the minor girl is the fear factor, as happened in Chechnya because the husband works as a policeman and threatened the girl’s family, which made them agree to marry his 17-year-old daughter for fear of their lives and what he might do to them as a policeman if they refuse to marry him, according to Weaver Caty “”The public in Russia and beyond has expressed shock at the recent marriage of a Chechen girl to a man who is 30 years older. The girl is 17 years old. The man is a 47-year-old police chief. And he is already married to another woman.””, this shows that there are those who work in the field of law and yet they do not care about applying the law and working for their own benefit.

Yemen is a developing country and because of its bad economy, the majority of the population suffers from living below the poverty level. There is not enough income for a family of more than four people, which makes the girl a burden on her family. The most suitable solution is to marry her at an early age to get rid of the burden of raising her from the father.

Yemen is considered one of the countries that practice early marriage for girls, where it is considered normal, and the majority of Yemenis married at an early age as their mothers were before them. It is a social norm that has been going on since ancient times and is still practiced today. I met and knew women who married young and have children and are happy in their married life. And there are girls who have suffered psychological and physical from early marriages, especially those who live in villages and remote places where they suffer from miscarriage or the death of the fetus or child because of the absence of a hospital in their area. One of the cases I know is my cousin, who lives in the village. When she gave birth to her third child, the baby was exposed to a lack of oxygen during her birth, and the family toke her to the nearest hospital about an hour or so from their village. When they arrived there, the time was late. There was a damage to the brain cells of the newborn, making her suffer from permanent mental disability.

I have a sister who has four daughters the oldest is fourteen years and studying in middle school, she informed me several months ago that the father intends to marry her daughter. My sister is an educated and knowledgeable woman who rejects the idea of ??marrying her daughter at this age, Unfortunately, the subject is not in her hands, but in her husband’s hands. The Yemeni husband is the main controller of the wife and daughter. The only thing my sister can do in such a situation is to try to delay her daughter’s marriage for a year or two, but if the father insists on completing the marriage, it will happen at his request.

Luck of education: Because the child-girl get married so early she was force to leave school and she is not allowed to continue her education, the community know that if the girl continue her education she will be more aware about the consequence of her early marriage. When the girl is an orphan she is weaker, they being forced to marry so early and sometimes in some cases it is the only option she has. If the girl refused to get married the families start to tread her so badly, abuse, and curse her every day and make her live miserable, so she agreed to marry and leave the house. The child-girl is usually prevented from completing the various stages of education because of the responsibility assigned to her. This naturally reduces the culture and the girl’s awareness and her ability to think properly, as well as the follow-up of her children in the educational stages.

At this young age, the mother does not have sufficient capacity to fully understand the nature and problems of life. This leads to an unintentional limitation of proper education due to lacking mother’s awareness. Physical and mental problem: child marriage happens most the time before the girl’s body completely develop and may got pregnancy while still adolescent and before her body became ready for such operation, in this period pregnancy became very risky and more complicated and put both the mother and child in danger “maternal behavior may be impacted by early motherhood, data has showed teenage mothers have worse health care behavior for themselves and their children as compared.”

Getting pregnant for a girl who is still a child is something she in not prepared for and her pregnancy could put her in risks and may have complexity with giving birth to her baby, or even have a physical complication, such as fistula, fistula is an debilitating condition where the girl can no longer control her urine and bowel movements, according to Stephanie Sinclair in her article, The Bride Price, child Marriage in India, she says that “ In Ethiopia, Yakaba, 15, was in labor for three days before her family was able to get her to hospital. She later developed fistula and was shunned by her neighbors who believed her cursed by God.”. The marriage of young girls increases the chances of their existence exposed to difficult psychological conditions resulting from the pressures of marital life and the great responsibilities that they bear without concern to their young age and lack of experience and therefore difficult to deal with crises.

There is no doubt that early marriage is a danger that can destroy society if it is not controlled by spreading awareness and culture to the wife, children and the society as a whole. Early marriage is a global dilemma for millions of girls. For financial, cultural, and political reasons the family has to marry their daughters in an early age. Finally Birth, marriage and death are three stations in human life, but only in marriage, can choose.

Early Child Marriage And its Existence in Societies. (2019, Dec 15). Retrieved from https://papersowl.com/examples/early-child-marriage-and-its-existence-in-societies/