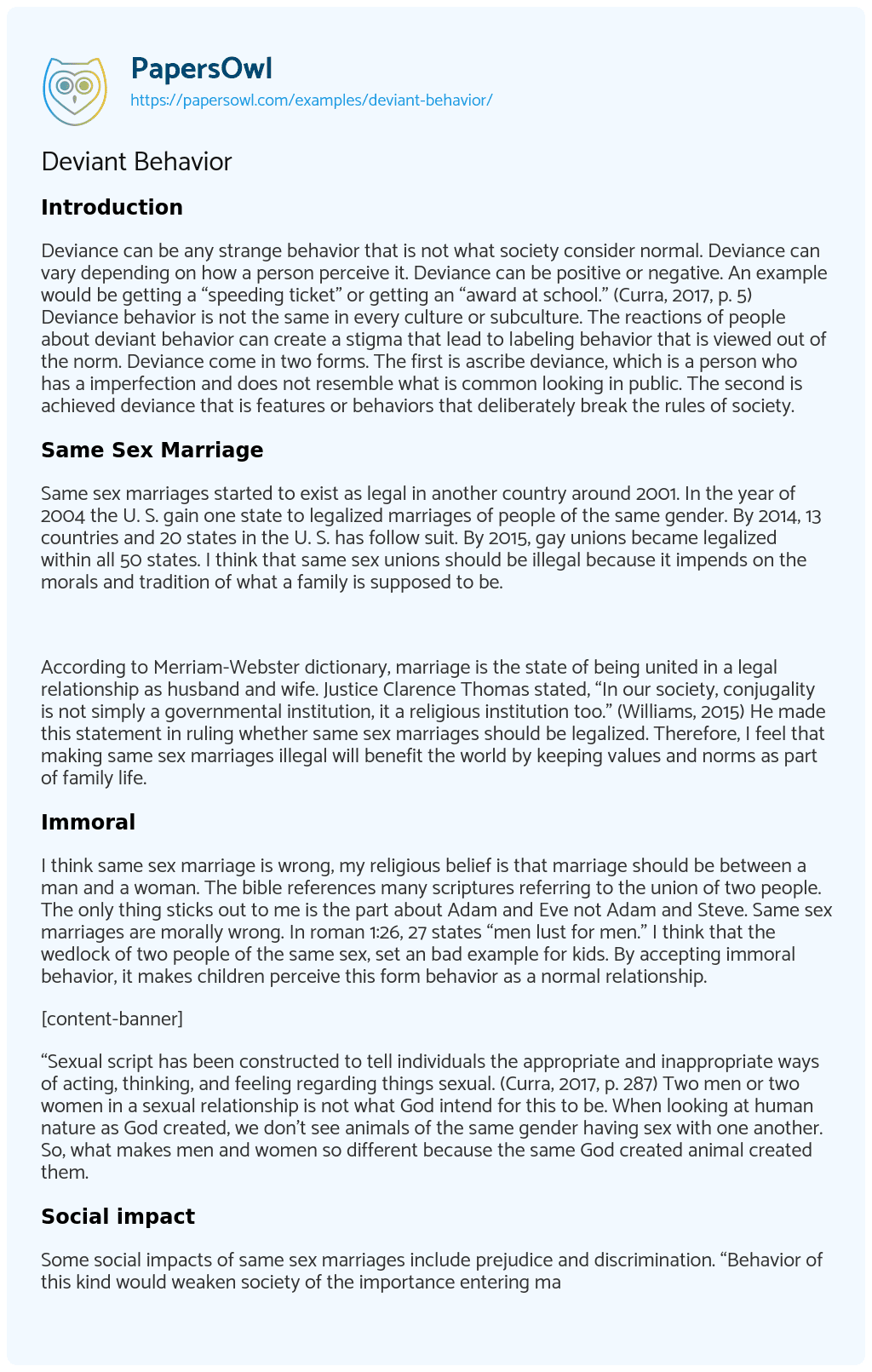 Deviance can be any strange behavior that is not what society consider normal. Deviance can vary depending on how a person perceive it. Deviance can be positive or negative. An example would be getting a “speeding ticket” or getting an “award at school.” (Curra, 2017, p. 5) Deviance behavior is not the same in every culture or subculture. The reactions of people about deviant behavior can create a stigma that lead to labeling behavior that is viewed out of the norm. Deviance come in two forms. The first is ascribe deviance, which is a person who has a imperfection and does not resemble what is common looking in public. The second is achieved deviance that is features or behaviors that deliberately break the rules of society.

Same sex marriages started to exist as legal in another country around 2001. In the year of 2004 the U. S. gain one state to legalized marriages of people of the same gender. By 2014, 13 countries and 20 states in the U. S. has follow suit. By 2015, gay unions became legalized within all 50 states. I think that same sex unions should be illegal because it impends on the morals and tradition of what a family is supposed to be.

According to Merriam-Webster dictionary, marriage is the state of being united in a legal relationship as husband and wife. Justice Clarence Thomas stated, “In our society, conjugality is not simply a governmental institution, it a religious institution too.” (Williams, 2015) He made this statement in ruling whether same sex marriages should be legalized. Therefore, I feel that making same sex marriages illegal will benefit the world by keeping values and norms as part of family life.

I think same sex marriage is wrong, my religious belief is that marriage should be between a man and a woman. The bible references many scriptures referring to the union of two people. The only thing sticks out to me is the part about Adam and Eve not Adam and Steve. Same sex marriages are morally wrong. In roman 1:26, 27 states “men lust for men.” I think that the wedlock of two people of the same sex, set an bad example for kids. By accepting immoral behavior, it makes children perceive this form behavior as a normal relationship.

“Sexual script has been constructed to tell individuals the appropriate and inappropriate ways of acting, thinking, and feeling regarding things sexual. (Curra, 2017, p. 287) Two men or two women in a sexual relationship is not what God intend for this to be. When looking at human nature as God created, we don’t see animals of the same gender having sex with one another. So, what makes men and women so different because the same God created animal created them.

Some social impacts of same sex marriages include prejudice and discrimination. “Behavior of this kind would weaken society of the importance entering marriage to have children.” (Dinno 2013, p. 2) Having judges to perform same marriages goes against their religious beliefs. By making same sex marriage illegal it will take the pressure off churches to accept this absurd behavior. This stress come from having an immoral act push on the one’s faith to keep his or her job by marring couples of the same sex. Same sex marriages have couple going to court to get benefits of their spouse when they die.

Children of same sex marriages will have to face jokes and other children teasing and taunting them about this union. I feel children will question their gender identity at an early stage in their life. Children will be forced to accept a union that they do not believe in. Same sex marriage is an example of what Curra called “sexual deviance going beyond the prevailing culture and the subculture scripts and inventing their own.” (Curra, 2017, p.287) Some feel that making same sex marriages legal is a human right.

An individual can tie bonds with whomever he or she choose. They shouldn’t feel guilt for loving a person for whom they are. Same sex couples feel that laws for heterosexual couples should be treated the same for them too. The Gallup Poll, “10% of Americans feel that same sex marriages would be good for society.” (Kiefer, 2003) “Some People find it easier to justify actions they can get away with.” (Urbatsch, 2018, p.229) Therefore, society has started to accept behaviors that are out of the norm,

Same sex couple felt that they were not able to love freely the person that they were in love with. Society shun them by putting labels and treating them like outsiders. “Societal prejudice and discrimination against same sex marriages resulted in the couples damage to the self.” (Crespi, 2015, p.228-232) By having a law to let them marry a person regardless of gender was victory for them. They felt morals and dignity brought back into their life. “Sexual Stigma is institutionalized through marriage inequality because laws denying access to marriage reflect structural stigma.” (Ogolsky, 2019, February)

We live in a society where our behavior is judged by another person thoughts of what they think is normal. Some people today act strange and their actions are unfamiliar. Sometimes behavior can impact society s being a good thing or a bad thing. When behavior is seen in this way it is called deviant behavior. When others see what other do is wrong this can be negative. That is when social stigma is attached to that behavior. Prostitution is the exchange of money for sex. Man or woman can be a prostitute. Prostitution can be perceived differently in other cultures and subcultures. Opinions on prostitution have waivered over time. Prostitution is a uncommon behavior that isn’t fading away soon. For this reason, the potential to legalize prostitution will give some control to sex workers and the government. I feel prostitution should become legal to benefit the prostitutes and the economy.

Prostitution is an action that some people do to provide for their families, try to get out of poverty, meet their everyday needs. Prostituting gives some women a source of income. Prostitutes will have control over the money they make without having to turn it over to a pimp. Also, by making prostitution legal it will give states revenue and the money prostitutes make can be taxed. Prostitution is a money-making business. Prostitution in some major cities bring in a huge amount of money. According to Pew research, “Atlanta illegal prostitution bring in an estimate of $290 million a year, Miami value at $205 million, and Denver value at $40 million a year.” (Washington Post, 2015) Taxes from the illegal professional could be used for funding other police needs and help keep prostitutes stay safe..

Legalizing prostitution will slow down sex trafficking and do away with a pimp. Prostitutes will no longer be abused and used by pimps, and any other men that beat them for sex. It will reduce sexual violence and sex trade.

Many believe prostitution shouldn’t be made legal because it’s a health risk that go against moral standards. Prostitution becoming legal will cause prostitutes and their counter parts to have a lot of different partners, which in turn given them a chance of getting sexual transmitted diseases. Women will be open to violent acts that might cause them harm. The may be raped, abused, or even sold to a person in another country. The being terrorized or torture come with prostitution.

Some sexual identities can lead to social inequalities when it comes to being accepted by society. Homosexuals, prostitutes, Lesbians all hold a stigma when it comes to sexual identities or sexual actions that is not seen normal. Deviant behavior come from social reaction of society when something not in the norm. Marriage of same sex has been accepted in many countries. Social institutions have replaced the meaning of a time honored merger with travesty called same sex marriage. “Battle over morality and legality of same sex marriages will be a constant part of the marriage battle.” (Curra, 2017, p.310) Prostitution is still the forbidden job for women, even though it is a multi-million-dollar business that could help the economy and decrease crime that surround it.”

Crime and Deviant Behavior: Birds of a Feather Flock Together

Homosexuality Behavior is Exhibited through all Types of Species of Animals