Crime and Deviant Behavior: Birds of a Feather Flock Together 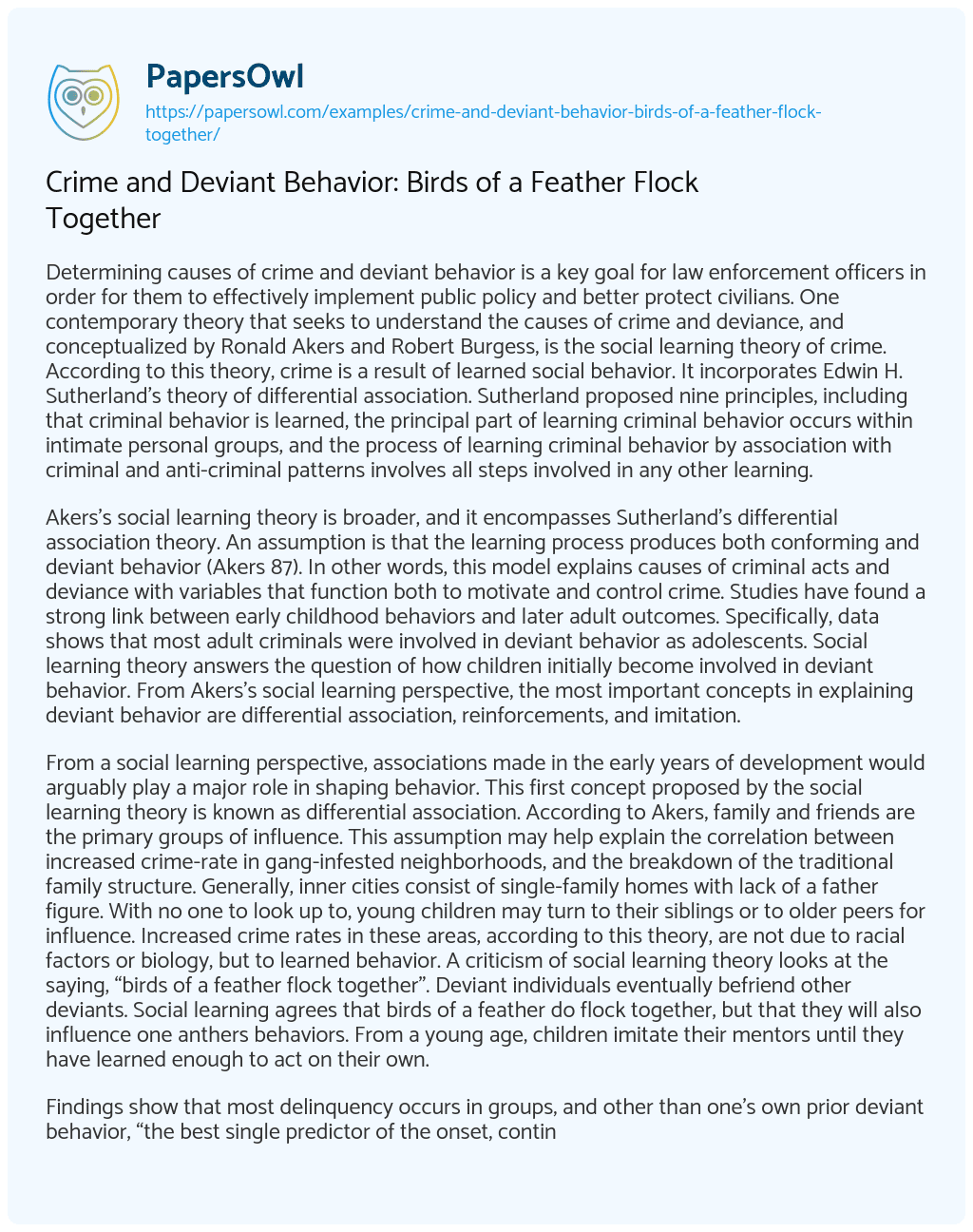 Determining causes of crime and deviant behavior is a key goal for law enforcement officers in order for them to effectively implement public policy and better protect civilians. One contemporary theory that seeks to understand the causes of crime and deviance, and conceptualized by Ronald Akers and Robert Burgess, is the social learning theory of crime. According to this theory, crime is a result of learned social behavior. It incorporates Edwin H. Sutherland’s theory of differential association. Sutherland proposed nine principles, including that criminal behavior is learned, the principal part of learning criminal behavior occurs within intimate personal groups, and the process of learning criminal behavior by association with criminal and anti-criminal patterns involves all steps involved in any other learning.

Akers’s social learning theory is broader, and it encompasses Sutherland’s differential association theory. An assumption is that the learning process produces both conforming and deviant behavior (Akers 87). In other words, this model explains causes of criminal acts and deviance with variables that function both to motivate and control crime. Studies have found a strong link between early childhood behaviors and later adult outcomes. Specifically, data shows that most adult criminals were involved in deviant behavior as adolescents. Social learning theory answers the question of how children initially become involved in deviant behavior. From Akers’s social learning perspective, the most important concepts in explaining deviant behavior are differential association, reinforcements, and imitation.

From a social learning perspective, associations made in the early years of development would arguably play a major role in shaping behavior. This first concept proposed by the social learning theory is known as differential association. According to Akers, family and friends are the primary groups of influence. This assumption may help explain the correlation between increased crime-rate in gang-infested neighborhoods, and the breakdown of the traditional family structure. Generally, inner cities consist of single-family homes with lack of a father figure. With no one to look up to, young children may turn to their siblings or to older peers for influence. Increased crime rates in these areas, according to this theory, are not due to racial factors or biology, but to learned behavior. A criticism of social learning theory looks at the saying, “birds of a feather flock together”. Deviant individuals eventually befriend other deviants. Social learning agrees that birds of a feather do flock together, but that they will also influence one anthers behaviors. From a young age, children imitate their mentors until they have learned enough to act on their own.

Findings show that most delinquency occurs in groups, and other than one’s own prior deviant behavior, “the best single predictor of the onset, continuance, or resistance of crime and delinquency is differential association with conforming or law-violating peers” (Akers 98). The greater number of delinquent friends one has, the greater likelihood that individual will engage in deviant acts as well. A skepticism that may arise is when individuals who live in gang-infested areas or are associated with delinquent peers do not engage in crime. Sellin offers insight into the causes of failure to internalized norms. Possibilities may include ignorance, socialization to a different norm, or incapacity due to mental deficiency or disease. Research also shows that deviant behavior during adolescent years is a strong determinant for adult criminal activity, and therefore emphasizes the importance of social learning.

Most of the learning in criminal and deviant behavior is the result of social exchange in which words, responses, presence and behavior of other persons directly reinforce behavior, provide a setting for reinforcement. A second variable in Aker’s social learning theory is social reinforcement; whether individuals will refrain from or commit a crime depending on past, present, and anticipated future rewards or punishments. From studies of the effectiveness of capital punishment, future punishment is not nearly as effective as past punishment in deterring criminal acts. Social reinforcement, especially from peers and family, affect how much one sees committing certain acts ok or not.

Social learning theory analysis confirmed the social learning theory’s prediction that family and friends were most important in understanding what was reinforcing for a person. The family is the first to expose children to normative values, behavior models and reinforcement of those behaviors. The role of the family is as a conventional socializer against delinquency. Therefore, deviant behavior may be the outcome of internal family interaction. Deviant parental models, ineffective and negative parental supervision, support of values favorable to deviance, such as underage drinking, all contribute to reinforcement of certain behaviors. Ineffective parental disciplinary strategies increase the chances that a child will learn behavior in the early years that is a precursor to his or her later delinquency (Akers 97).

As children get older and are able to choose their own friends, “peer groups play an increasingly prominent role in learning conforming and deviant behavior” (98). The vast majority of offenses by adolescents are committed while in a group. And again, imitation soon becomes less important and the now delinquent has learned deviant behaviors that may continue to worsen with age. A longitudinal study by Haynie found that youth with only delinquent friends were twice as like, and those with some delinquent friends were much more likely than those with none to engage in delinquent acts. For example, most schools teach the dangers of drugs and alcohol use, but many students choose to use them anyways. These deviant behaviors are normally begun and learned with pressure from peers or social environment, especially in college. Guilt may be associated initially when an individual is first exposed to such substances, but positive reinforcement is implemented when they are more accepted by peers, and when they do not see any negative short-term consequences. Another study found that gang membership vastly increased involvement in delinquency. In a vast majority of cases, exposure to delinquent peers usually precedes illegal behavior.

These findings solidify the assumptions that delinquency is learned and that delinquency is a group behavior. Why, then, do individuals commit crimes when not in group settings? Social learning theory answers this with Akers’ last variable; imitation. According to Akers, imitation of a behavior is strongest at the onset, and slowly decreases as the behavior is reinforced. In other words, someone will be strongly influenced by others when first committing a crime, and once they become more comfortable, the deviant behavior becomes a norm. Because this theory relies strongly on differential reinforcement, problems arise when trying to implement prevention strategies because little can be done about current deviants. According to this theory, if individuals are properly reinforced and have strong moral influences, good or bad, from a very early age, it will be difficult to reverse the learned behaviors.

Differential reinforcement is most likely more significant in the early stages of life and is therefore difficult to test and study. Correctional programs that could be implemented the criminal justice system would need to focus on breaking bad habits and learning new behaviors, which becomes more difficult the older the deviant is. Social learning theory has the strongest effect when social learning variables are included in integrated or combined models with different theories. However, since the most influential part of a child’s development is during their earliest years, it is nearly impossible to ensure good parenting tactics that will set kids up for good behavior and a good conscience to make moral decisions and choose to associate with good friends.

Crime and Deviant Behavior: Birds of a Feather Flock Together. (2021, Mar 24). Retrieved from https://papersowl.com/examples/crime-and-deviant-behavior-birds-of-a-feather-flock-together/

Cyberbullying: Exploring Components of Offending in the Lens of the Social Learning Theory

One of the most Famous Cultist Leaders – Charles Manson