Development of the Child from Conception to Birth 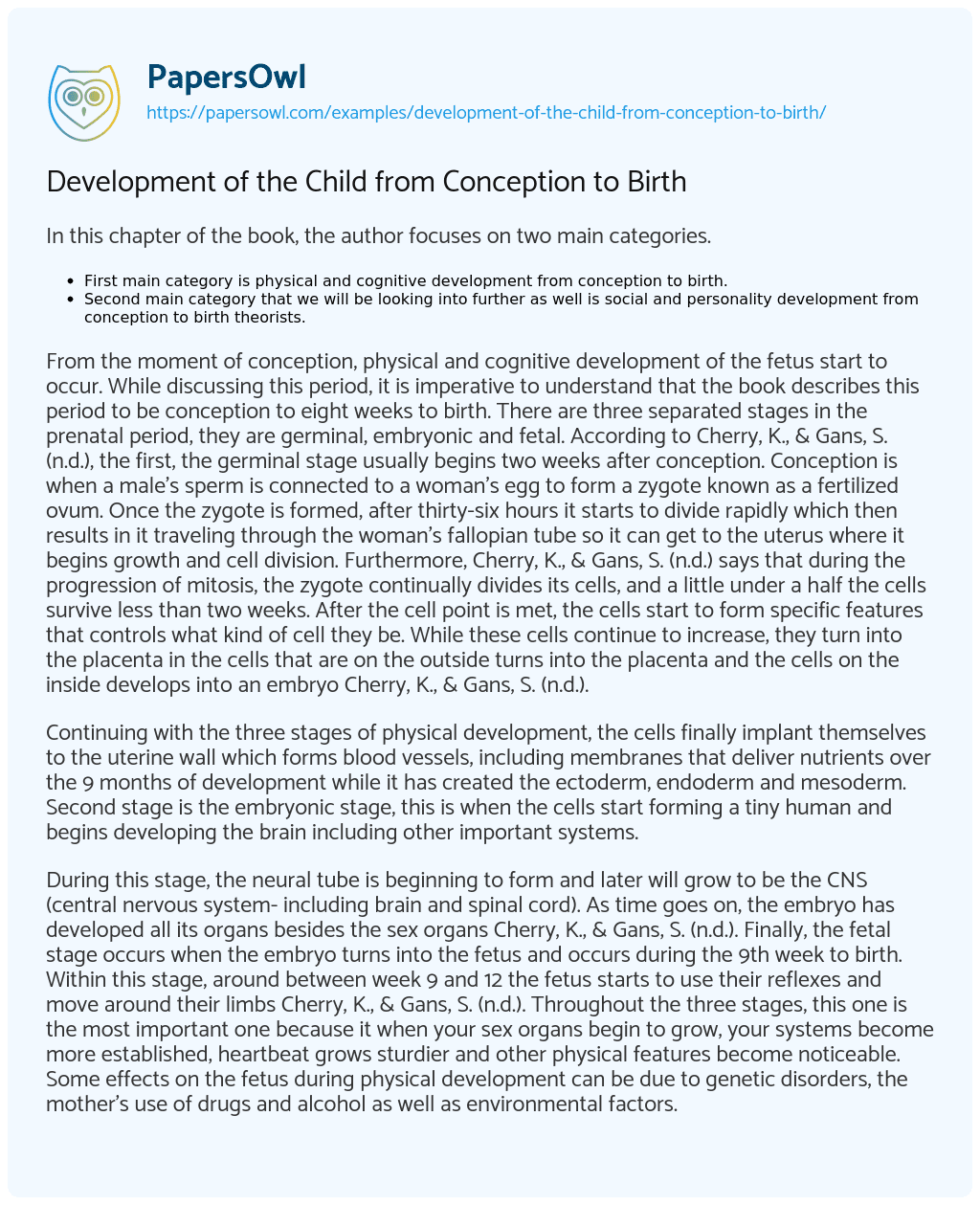 In this chapter of the book, the author focuses on two main categories.

From the moment of conception, physical and cognitive development of the fetus start to occur. While discussing this period, it is imperative to understand that the book describes this period to be conception to eight weeks to birth. There are three separated stages in the prenatal period, they are germinal, embryonic and fetal. According to Cherry, K., & Gans, S. (n.d.), the first, the germinal stage usually begins two weeks after conception. Conception is when a male’s sperm is connected to a woman’s egg to form a zygote known as a fertilized ovum. Once the zygote is formed, after thirty-six hours it starts to divide rapidly which then results in it traveling through the woman’s fallopian tube so it can get to the uterus where it begins growth and cell division. Furthermore, Cherry, K., & Gans, S. (n.d.) says that during the progression of mitosis, the zygote continually divides its cells, and a little under a half the cells survive less than two weeks. After the cell point is met, the cells start to form specific features that controls what kind of cell they be. While these cells continue to increase, they turn into the placenta in the cells that are on the outside turns into the placenta and the cells on the inside develops into an embryo Cherry, K., & Gans, S. (n.d.).

Continuing with the three stages of physical development, the cells finally implant themselves to the uterine wall which forms blood vessels, including membranes that deliver nutrients over the 9 months of development while it has created the ectoderm, endoderm and mesoderm. Second stage is the embryonic stage, this is when the cells start forming a tiny human and begins developing the brain including other important systems.

During this stage, the neural tube is beginning to form and later will grow to be the CNS (central nervous system- including brain and spinal cord). As time goes on, the embryo has developed all its organs besides the sex organs Cherry, K., & Gans, S. (n.d.). Finally, the fetal stage occurs when the embryo turns into the fetus and occurs during the 9th week to birth. Within this stage, around between week 9 and 12 the fetus starts to use their reflexes and move around their limbs Cherry, K., & Gans, S. (n.d.). Throughout the three stages, this one is the most important one because it when your sex organs begin to grow, your systems become more established, heartbeat grows sturdier and other physical features become noticeable. Some effects on the fetus during physical development can be due to genetic disorders, the mother’s use of drugs and alcohol as well as environmental factors.

These multiple factors include but aren’t limited to fetal alcohol syndrome, impaired physical growth. Genetic disorders that can occur are down syndrome, congenital adrenal hyperplasia, spina bifida, ovarian cancer, huntingtins disease, hemophilia A & B, cystic fibrosis being some of them. As far as the environmental factors affecting the fetus go, when the mother is exposed to pesticides, tobacco, cocaine, stress, obesity, diet, teratogens in addition to other factors such as lead transfers to the fetus affects both physical and cognitive development Cherry, K. (n.d.). According to Espel, E. V., Glynn, L. M., Sandman, C. A., & Davis, E. P. (2014), the length of gestation influences the psychomotor and mental developmental indexes which can affect the maturation throughout the lifespan.

Cognitive development is a serious process that happens to occur during the physical development. When these critical and sensitive stages occur due to the growth of the brain, myelinization in addition to other processes to produce the detailed parts of the cognitive abilities like creating perception, memories, many actions, and more. At around 22 weeks of gestation the mother gets an ultrasound to view how complex the motor skills are in addition to the behaviors. Some effects on cognitive development can cause the fetus to have a type of learning disability, behavioral problems, and could also cause decreased cognitive functions Kadic, A., & Kurjak, A. (2018).

Jean Piaget is a cognitive theorist that says this type of development maps out how a child will grow up to view the world. Overall, Piaget did a study to analyze how well an infant can use their reasoning and hypothesizing abilities due to maturing and ecological exposure.

One of the major theorists is Lev Vygotsky and his theory is based on social development. His theory says that cognitive development plays a major role in an infant’s ability to develop speech, cultures, react well to social encounters and more, for example meeting a new family member for the first time.

On the other hand, the theorist Lawrence Kohlberg has three stages of moral reasoning which are: 1. How infants decide to act when they want to receive rewards and stay away from getting reprimanded, 2. Keeping up with societal guidelines, and 3. How a culture or specific group follows these principles that may or may not be more important to their country or group. For example, he talks about how a person may be treated unfairly even though they are following what their authorities are telling them to do.

A theorist that deals specifically with prenatal development along with other theorists is John Bowlby who discusses theory of attachment. An example of his theory would be fetal attachment and how the fetus is already attached to his mother even before skin to skin contact.

Development of the Child from Conception to Birth. (2021, Nov 27). Retrieved from https://papersowl.com/examples/development-of-the-child-from-conception-to-birth/

The Effects of Nicotine on Child Development and Birth Control

The Different Stages of Child Development from the Prenatal to Adulthood