Connection between Genetics and Diabetes 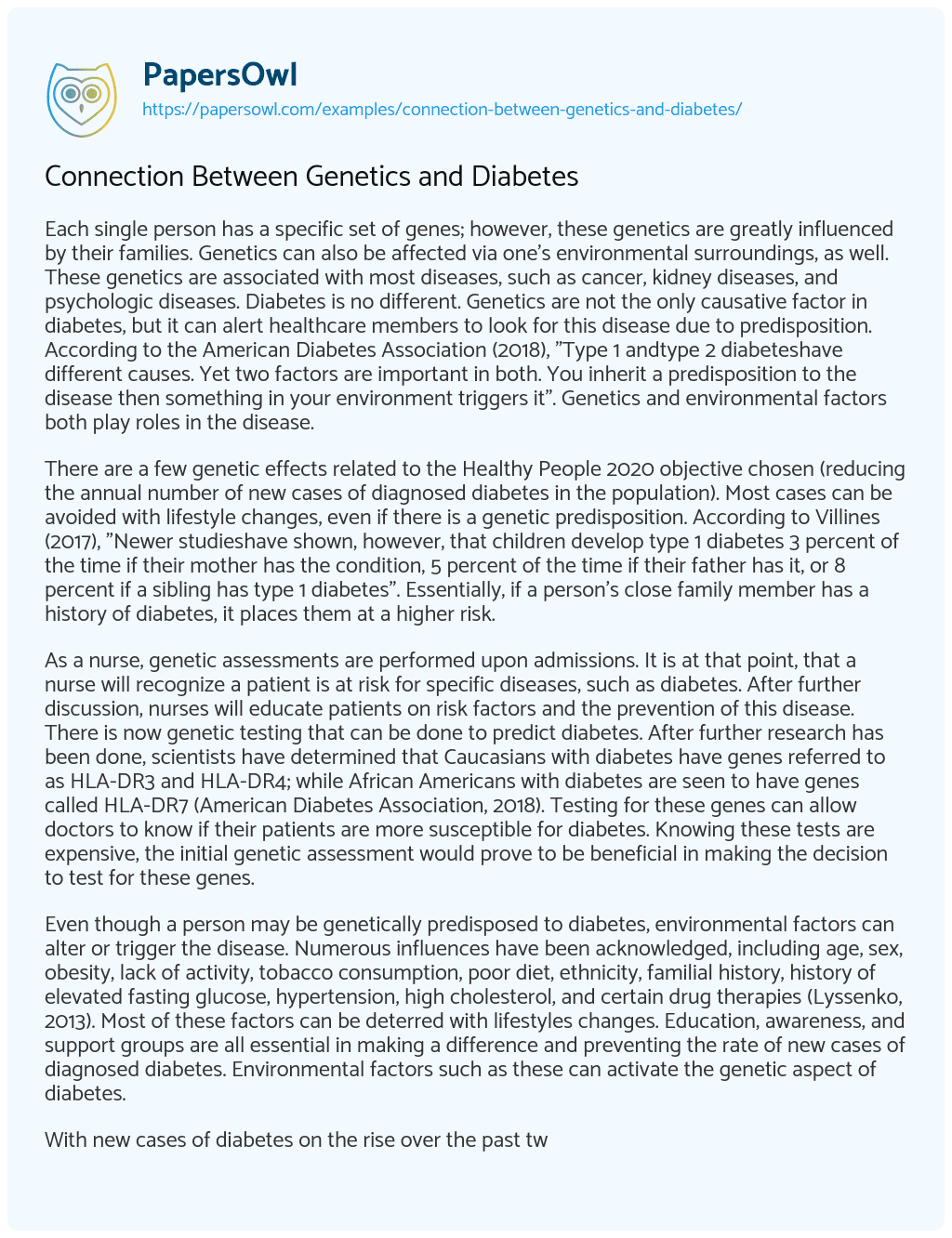 Each single person has a specific set of genes; however, these genetics are greatly influenced by their families. Genetics can also be affected via one’s environmental surroundings, as well. These genetics are associated with most diseases, such as cancer, kidney diseases, and psychologic diseases. Diabetes is no different. Genetics are not the only causative factor in diabetes, but it can alert healthcare members to look for this disease due to predisposition. According to the American Diabetes Association (2018), “Type 1 andtype 2 diabeteshave different causes. Yet two factors are important in both. You inherit a predisposition to the disease then something in your environment triggers it”. Genetics and environmental factors both play roles in the disease.

There are a few genetic effects related to the Healthy People 2020 objective chosen (reducing the annual number of new cases of diagnosed diabetes in the population). Most cases can be avoided with lifestyle changes, even if there is a genetic predisposition. According to Villines (2017), “Newer studieshave shown, however, that children develop type 1 diabetes 3 percent of the time if their mother has the condition, 5 percent of the time if their father has it, or 8 percent if a sibling has type 1 diabetes”. Essentially, if a person’s close family member has a history of diabetes, it places them at a higher risk.

As a nurse, genetic assessments are performed upon admissions. It is at that point, that a nurse will recognize a patient is at risk for specific diseases, such as diabetes. After further discussion, nurses will educate patients on risk factors and the prevention of this disease. There is now genetic testing that can be done to predict diabetes. After further research has been done, scientists have determined that Caucasians with diabetes have genes referred to as HLA-DR3 and HLA-DR4; while African Americans with diabetes are seen to have genes called HLA-DR7 (American Diabetes Association, 2018). Testing for these genes can allow doctors to know if their patients are more susceptible for diabetes. Knowing these tests are expensive, the initial genetic assessment would prove to be beneficial in making the decision to test for these genes.

Even though a person may be genetically predisposed to diabetes, environmental factors can alter or trigger the disease. Numerous influences have been acknowledged, including age, sex, obesity, lack of activity, tobacco consumption, poor diet, ethnicity, familial history, history of elevated fasting glucose, hypertension, high cholesterol, and certain drug therapies (Lyssenko, 2013). Most of these factors can be deterred with lifestyles changes. Education, awareness, and support groups are all essential in making a difference and preventing the rate of new cases of diagnosed diabetes. Environmental factors such as these can activate the genetic aspect of diabetes.

With new cases of diabetes on the rise over the past two decades, it is paramount to society to act now and change this trend. Using the current tools, cheaper and more effective methods of testing need to be developed to reach more of the population. Diabetes does not discriminate on age, race, religion, or income. With each new case diagnosed, the battle is being lost. Even if a person is predisposed, with the right lifestyle changes and avoidance of environmental risk factors; diabetes can be minimized. Future generations will have a much lower risk of developing diabetes if the newly diagnosed rate is decreased now.

Connection Between Genetics and Diabetes. (2019, Nov 05). Retrieved from https://papersowl.com/examples/connection-between-genetics-and-diabetes/

Connection between Depression and Diabetes