Comparison of the Story and Poem “There Will Come Soft Rains” 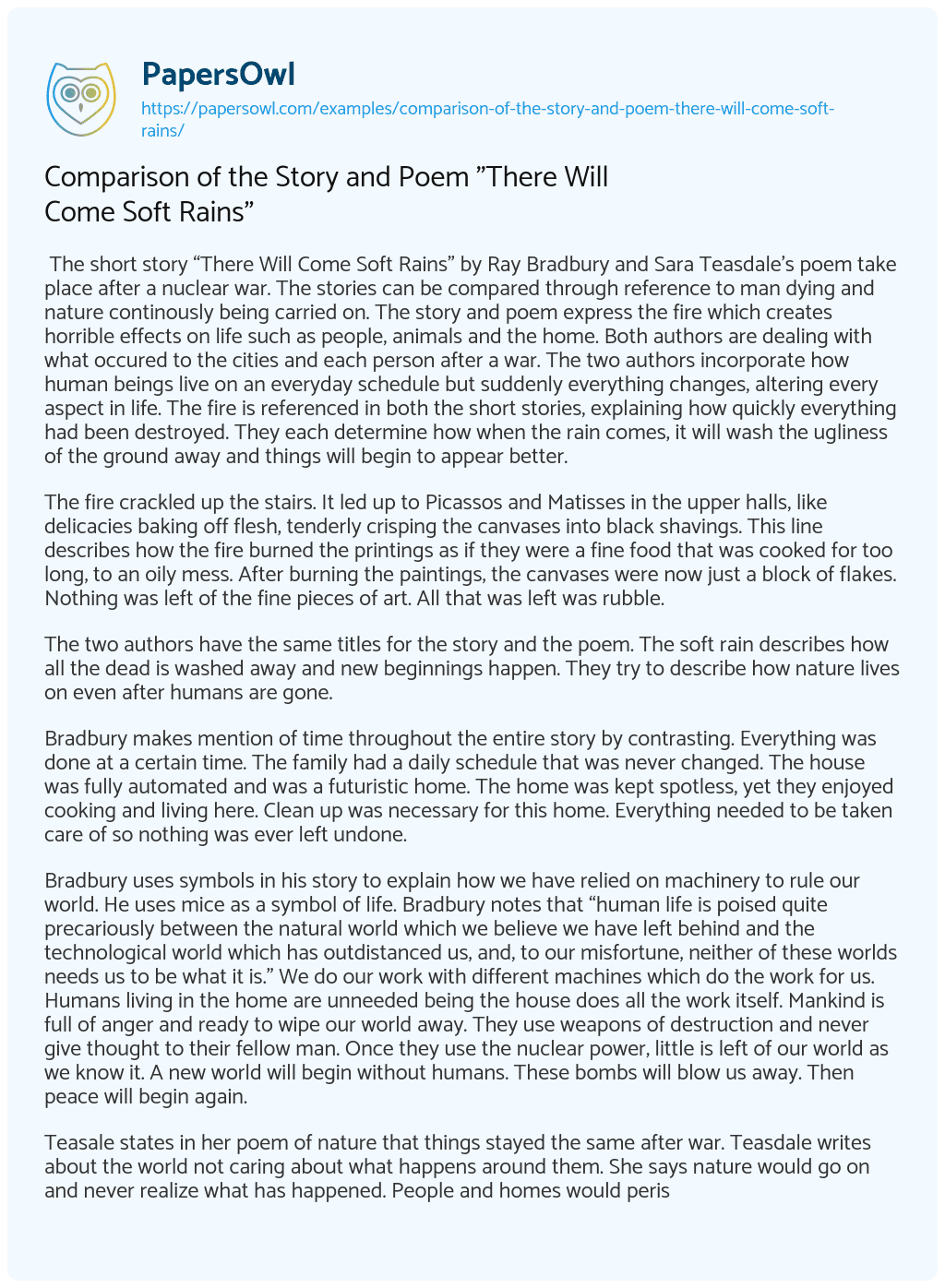 The short story “There Will Come Soft Rains” by Ray Bradbury and Sara Teasdale’s poem take place after a nuclear war. The stories can be compared through reference to man dying and nature continously being carried on. The story and poem express the fire which creates horrible effects on life such as people, animals and the home. Both authors are dealing with what occured to the cities and each person after a war. The two authors incorporate how human beings live on an everyday schedule but suddenly everything changes, altering every aspect in life. The fire is referenced in both the short stories, explaining how quickly everything had been destroyed. They each determine how when the rain comes, it will wash the ugliness of the ground away and things will begin to appear better.

The fire crackled up the stairs. It led up to Picassos and Matisses in the upper halls, like delicacies baking off flesh, tenderly crisping the canvases into black shavings. This line describes how the fire burned the printings as if they were a fine food that was cooked for too long, to an oily mess. After burning the paintings, the canvases were now just a block of flakes. Nothing was left of the fine pieces of art. All that was left was rubble.

The two authors have the same titles for the story and the poem. The soft rain describes how all the dead is washed away and new beginnings happen. They try to describe how nature lives on even after humans are gone.

Bradbury makes mention of time throughout the entire story by contrasting. Everything was done at a certain time. The family had a daily schedule that was never changed. The house was fully automated and was a futuristic home. The home was kept spotless, yet they enjoyed cooking and living here. Clean up was necessary for this home. Everything needed to be taken care of so nothing was ever left undone.

Bradbury uses symbols in his story to explain how we have relied on machinery to rule our world. He uses mice as a symbol of life. Bradbury notes that “human life is poised quite precariously between the natural world which we believe we have left behind and the technological world which has outdistanced us, and, to our misfortune, neither of these worlds needs us to be what it is.” We do our work with different machines which do the work for us. Humans living in the home are unneeded being the house does all the work itself. Mankind is full of anger and ready to wipe our world away. They use weapons of destruction and never give thought to their fellow man. Once they use the nuclear power, little is left of our world as we know it. A new world will begin without humans. These bombs will blow us away. Then peace will begin again.

Teasale states in her poem of nature that things stayed the same after war. Teasdale writes about the world not caring about what happens around them. She says nature would go on and never realize what has happened. People and homes would perish but the world would still be here.

The fire would burn down everything but yet nature would come back and never realize the war had happened.

Teasdale wants us to realize that after death, life on earth will still exist. The end of the story comes when the fire begins. This starts the beginning of the end. The smell of the ground after the rain lets us realize things are fresh and clean again. The earth is ready to start over. Teasdale’s poem represents life after death. Louis Untermeyer, critic of In The New Era in American Poetry, notes that Teasdale had ‘a genius for the song, for the pure lyric in which words seem to have fallen into place without art or effort.’

I believe Bradbury used the poem to convey how even if humans do not exist on earth, earth will still be here. He chose to teach how humans act here on earth but also destroy one another to pieces. Nature continues producing beauty on it’s own and never stays at war with itself. Bradbury and Teasdale speak of war and have you believe what the world will come to when nuclear war happens. They show that when war is over after the rain comes to a halt, nothing will be different. Nature will continue going on.

In a world with peace, there would be no wars. We have become so lazy with having machines doing our work that we settle for a life of only looking for machines to do all our work. We fight with our fellow man on being the best until we end up fighting and destroying one another.

The two readings make you think about the world coming to an end and all that we will experience. It reminds us that with all the nations and power existing, we need to be prepared for another war. Life is so short and we need to stop and enjoy all that is offered to everyone of us before it is to late.

Comparison of the Story and Poem "There Will Come Soft Rains". (2021, Mar 24). Retrieved from https://papersowl.com/examples/comparison-of-the-story-and-poem-there-will-come-soft-rains/