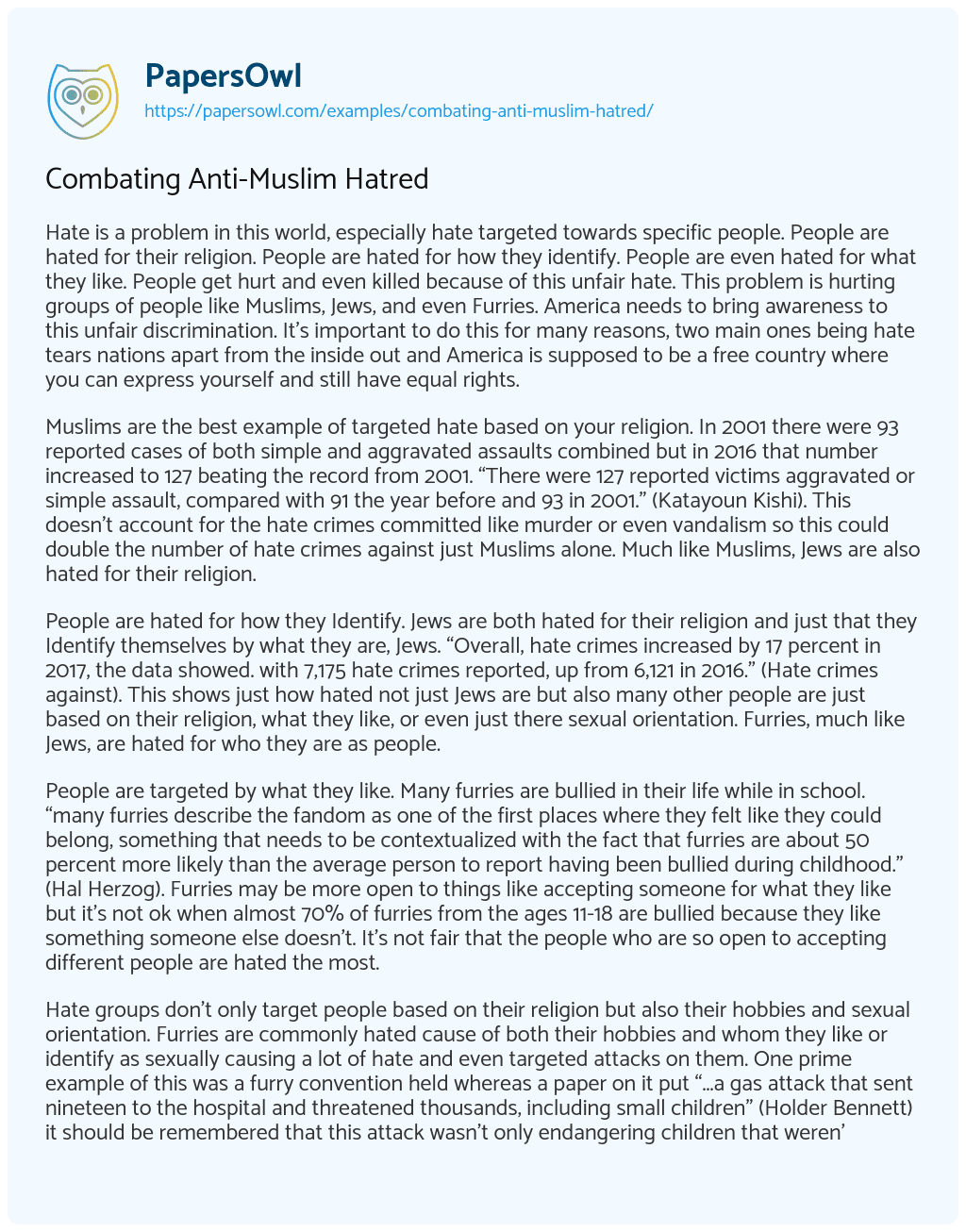 Hate is a problem in this world, especially hate targeted towards specific people. People are hated for their religion. People are hated for how they identify. People are even hated for what they like. People get hurt and even killed because of this unfair hate. This problem is hurting groups of people like Muslims, Jews, and even Furries. America needs to bring awareness to this unfair discrimination. It’s important to do this for many reasons, two main ones being hate tears nations apart from the inside out and America is supposed to be a free country where you can express yourself and still have equal rights.

Muslims are the best example of targeted hate based on your religion. In 2001 there were 93 reported cases of both simple and aggravated assaults combined but in 2016 that number increased to 127 beating the record from 2001. “There were 127 reported victims aggravated or simple assault, compared with 91 the year before and 93 in 2001.” (Katayoun Kishi). This doesn’t account for the hate crimes committed like murder or even vandalism so this could double the number of hate crimes against just Muslims alone. Much like Muslims, Jews are also hated for their religion.

People are hated for how they Identify. Jews are both hated for their religion and just that they Identify themselves by what they are, Jews. “Overall, hate crimes increased by 17 percent in 2017, the data showed. with 7,175 hate crimes reported, up from 6,121 in 2016.” (Hate crimes against). This shows just how hated not just Jews are but also many other people are just based on their religion, what they like, or even just there sexual orientation. Furries, much like Jews, are hated for who they are as people.

People are targeted by what they like. Many furries are bullied in their life while in school. “many furries describe the fandom as one of the first places where they felt like they could belong, something that needs to be contextualized with the fact that furries are about 50 percent more likely than the average person to report having been bullied during childhood.” (Hal Herzog). Furries may be more open to things like accepting someone for what they like but it’s not ok when almost 70% of furries from the ages 11-18 are bullied because they like something someone else doesn’t. It’s not fair that the people who are so open to accepting different people are hated the most.

Hate groups don’t only target people based on their religion but also their hobbies and sexual orientation. Furries are commonly hated cause of both their hobbies and whom they like or identify as sexually causing a lot of hate and even targeted attacks on them. One prime example of this was a furry convention held whereas a paper on it put “…a gas attack that sent nineteen to the hospital and threatened thousands, including small children” (Holder Bennett) it should be remembered that this attack wasn’t only endangering children that weren’t more than a few years old but also endangered humans lives that only met to share something they like and share in common with others. Even though it seems like Fandoms wouldn’t be hated as much as religions or even hated at all, the Furry Fandom goes to show that they can be hated as much and are even targeted in much the same ways showing discrimination against these relatively normal people.

Many people believe that furries are no more than fetishists or psychologically dysfunctional. A quote from a hate discussion board, called “Furries disgust me. You people are sick”, says “I know, right? They’re all fucking niggers. I hate niggers. They’re almost bad as queers. I hate anyone who’s different from me.” most others on the discussion board say things like zoofieliats or furfags. This isn’t just wrong to accuse people of things the fandom doesn’t support but also use slanderous names like furfags or furvert do describe a group of people that a person doesn’t know about.

One way to raise awareness of this subject of these groups of people be to show why you shouldn’t hate and discriminate against them. “A shift in targets has also taken place recently with the Syrian refugee crisis, as anti-Muslim groups have increasingly directed their ire toward the American refugee program. Refugees are commonly depicted as potential terrorist infiltrators by these organizations.” (ANTI-MUSLIM). The hate for these people be also shifting, making the hate groups target others, like refugee camps, and take their anger out on them because something they don’t like might happen that they don’t like. This subject should be made aware cause if it’s not a group of people might do something irrational and hurt if not kill hundreds to thousands of people.

A solution to this would be to start getting rid of the hate here in America. One way to do this would be to get rid of or dismantle the 1020 hate groups recorded in 2018. “Hate crimes motivated by religious bias accounted for 21.8% of incidents during 2017, involving 1,009 offenders and 1,749 victims.” (Anti-Semitism in).

People are hated for their religion. They are hated for how they identify as human. They are hated for what they like and are called terrible names. People get hurt from this targeted hate, killed even. They’re seen as a danger to “normal” humans and are called psychologically dysfunctional. Awareness needs to be brought up about this not just to save millions of lives from a future of hate and discrimination ut to also same countries from ripping each other apart. All the Hate groups need to be disbanded to show that America is free from hate and everybody is equal and one. If the whole world did this and got rid of hate groups, the world could be for the most part at peace and America could reunite with countries as well as unite with new ones.

https://www.splcenter.org/fighting-hate/extremist-files/ideology/anti-muslim this is a good source since it uses the suffix .org. It provides facts on the situation. It doesn’t have any bias despite not showing the author or date published.

Anti-Semitism in the United States. Retrieved March 7, 2019, from

https://www.jewishvirtuallibrary.org/statistics-on-religious-hate-crimes this is a good source cause the suffix .org is used. It provides the reported numbers of hate crimes committed on both Jewish and Islamic people. It has a reliable source to back it up and is clearly been studied before being written.it doesn’t show any bias.

https://www.psychologytoday.com/us/blog/animals-and-us/201707/what-s-the-deal-furries this is a good source since it gives information about the fandom. It doesn’t show much bias, if any, and was published recently. It also shows many good examples of how furries are hated and even discriminated against.

http://sequart.org/magazine/53504/furries-are-fellow-fans/ this is a good source cause it uses the suffix .org. It doesn’t show bias if any and has good, open, opinions about the fandom. It helps readers understand what furries are and why they’re like everyone else.

http://www.pewresearch.org/fact-tank/2017/11/15/assaults-against-muslims-in-u-s-surpass-2001-level/ this is a good source since it uses the prefix .org. It provides information from a credible source. It doesn’t show any bias and is big on facts.

https://www.jta.org/2018/11/13/united-states/hate-crimes-jews-rise-37-fbi-reports this site is good since it uses the suffix .org. it was written within the last six months. it provides many facts on the subject and doesn’t show any bias