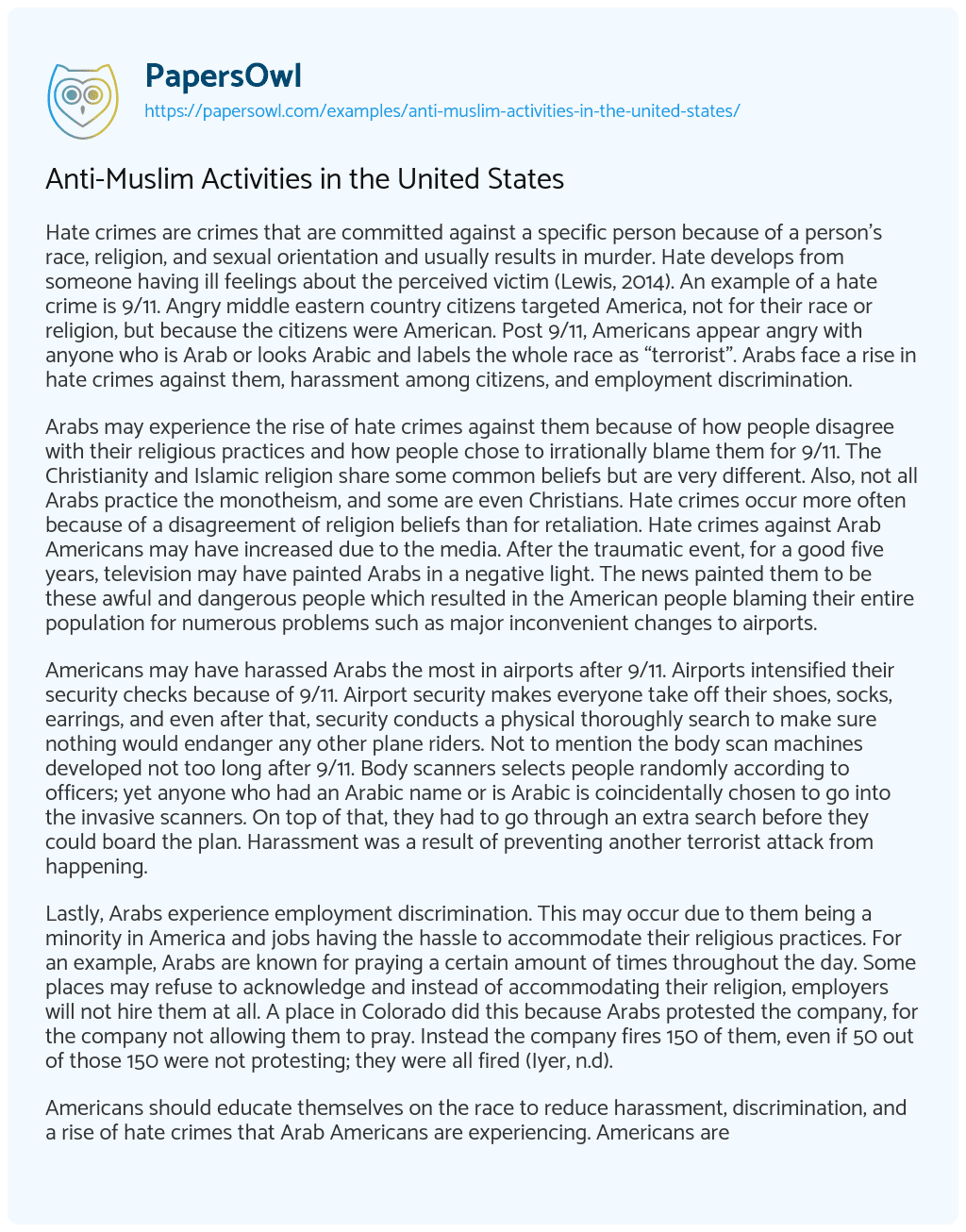 Hate crimes are crimes that are committed against a specific person because of a person’s race, religion, and sexual orientation and usually results in murder. Hate develops from someone having ill feelings about the perceived victim (Lewis, 2014). An example of a hate crime is 9/11. Angry middle eastern country citizens targeted America, not for their race or religion, but because the citizens were American. Post 9/11, Americans appear angry with anyone who is Arab or looks Arabic and labels the whole race as “terrorist”. Arabs face a rise in hate crimes against them, harassment among citizens, and employment discrimination.

Arabs may experience the rise of hate crimes against them because of how people disagree with their religious practices and how people chose to irrationally blame them for 9/11. The Christianity and Islamic religion share some common beliefs but are very different. Also, not all Arabs practice the monotheism, and some are even Christians. Hate crimes occur more often because of a disagreement of religion beliefs than for retaliation. Hate crimes against Arab Americans may have increased due to the media. After the traumatic event, for a good five years, television may have painted Arabs in a negative light. The news painted them to be these awful and dangerous people which resulted in the American people blaming their entire population for numerous problems such as major inconvenient changes to airports.

Americans may have harassed Arabs the most in airports after 9/11. Airports intensified their security checks because of 9/11. Airport security makes everyone take off their shoes, socks, earrings, and even after that, security conducts a physical thoroughly search to make sure nothing would endanger any other plane riders. Not to mention the body scan machines developed not too long after 9/11. Body scanners selects people randomly according to officers; yet anyone who had an Arabic name or is Arabic is coincidentally chosen to go into the invasive scanners. On top of that, they had to go through an extra search before they could board the plan. Harassment was a result of preventing another terrorist attack from happening.

Lastly, Arabs experience employment discrimination. This may occur due to them being a minority in America and jobs having the hassle to accommodate their religious practices. For an example, Arabs are known for praying a certain amount of times throughout the day. Some places may refuse to acknowledge and instead of accommodating their religion, employers will not hire them at all. A place in Colorado did this because Arabs protested the company, for the company not allowing them to pray. Instead the company fires 150 of them, even if 50 out of those 150 were not protesting; they were all fired (Iyer, n.d).

Americans should educate themselves on the race to reduce harassment, discrimination, and a rise of hate crimes that Arab Americans are experiencing. Americans are not taught in graduate school on why Arabs are way they are, why they do the things they do, or how they got into the country. If Americans understood them better, citizens may treat them better. Another solution is to check everyone equally at the airport. The body scanners should be random, or everyone must go through them, and no one should get extra checked unless it is a good reason.

Anti-Muslim Activities in the United States. (2020, Jul 01). Retrieved from https://papersowl.com/examples/anti-muslim-activities-in-the-united-states/

American Muslims in the United States

The United States of America Experienced a Drastic Change