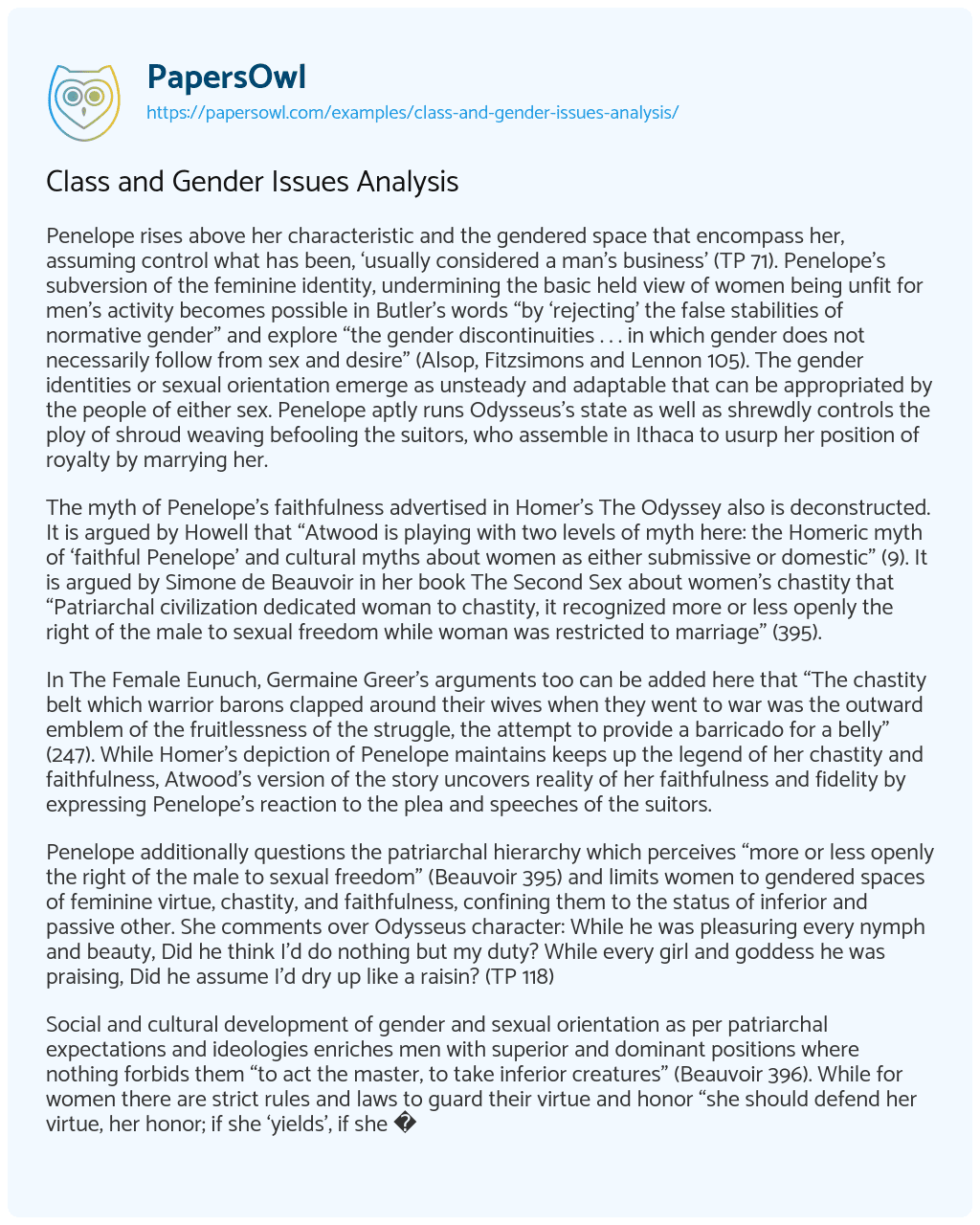 Penelope rises above her characteristic and the gendered space that encompass her, assuming control what has been, ‘usually considered a man’s business’ (TP 71). Penelope’s subversion of the feminine identity, undermining the basic held view of women being unfit for men’s activity becomes possible in Butler’s words “by ‘rejecting’ the false stabilities of normative gender” and explore “the gender discontinuities . . . in which gender does not necessarily follow from sex and desire” (Alsop, Fitzsimons and Lennon 105). The gender identities or sexual orientation emerge as unsteady and adaptable that can be appropriated by the people of either sex. Penelope aptly runs Odysseus’s state as well as shrewdly controls the ploy of shroud weaving befooling the suitors, who assemble in Ithaca to usurp her position of royalty by marrying her.

The myth of Penelope’s faithfulness advertised in Homer’s The Odyssey also is deconstructed. It is argued by Howell that “Atwood is playing with two levels of myth here: the Homeric myth of ‘faithful Penelope’ and cultural myths about women as either submissive or domestic” (9). It is argued by Simone de Beauvoir in her book The Second Sex about women’s chastity that “Patriarchal civilization dedicated woman to chastity, it recognized more or less openly the right of the male to sexual freedom while woman was restricted to marriage” (395).

In The Female Eunuch, Germaine Greer’s arguments too can be added here that “The chastity belt which warrior barons clapped around their wives when they went to war was the outward emblem of the fruitlessness of the struggle, the attempt to provide a barricado for a belly” (247). While Homer’s depiction of Penelope maintains keeps up the legend of her chastity and faithfulness, Atwood’s version of the story uncovers reality of her faithfulness and fidelity by expressing Penelope’s reaction to the plea and speeches of the suitors.

Penelope additionally questions the patriarchal hierarchy which perceives “more or less openly the right of the male to sexual freedom” (Beauvoir 395) and limits women to gendered spaces of feminine virtue, chastity, and faithfulness, confining them to the status of inferior and passive other. She comments over Odysseus character: While he was pleasuring every nymph and beauty, Did he think I’d do nothing but my duty? While every girl and goddess he was praising, Did he assume I’d dry up like a raisin? (TP 118)

Social and cultural development of gender and sexual orientation as per patriarchal expectations and ideologies enriches men with superior and dominant positions where nothing forbids them “to act the master, to take inferior creatures” (Beauvoir 396). While for women there are strict rules and laws to guard their virtue and honor “she should defend her virtue, her honor; if she ‘yields’, if she ‘falls’, she is scorned; whereas any blame visited upon her conqueror is mixed with admiration” (Beauvoir 395). After marriage, Odysseus threatens Penelope, that in the event that she is discovered “sleeping with some other man . . . he would be very cross indeed, and he would have to chop me into pieces with his sword or hang me from the roof beam” (TP 59), while he himself on his way back home after Trojan War, is depicted as engaging in sexual relations with goddesses and his heroism is praised and celebrated, leave apart the question and criticism of his marital infidelity.

Penelope is instructed by maid Eurycleia to protect her honor and virtue to the request of suitors and keep up her loyalty towards Odysseus so that she remains, ‘faithful to the very last gasp’. Thus woman is projected to give her husband her person, virginity and a rigorous fidelity being required, while no such dedication is made with respect to man. Penelope acknowledges this on the grounds that “To lover her husband and to be happy is a duty she owes to herself and to society . . . she readily persuades herself that she feels a great love for her husband”. . . “Very often the wife persists in her pretence of love through morality, hypocrisy, pride or timidity” (Beauvoir 481).

The fact of their gender identities is exposed to be performative where both Odysseus and Penelope hide their true identities disguising it beneath constructed and performative masculinity and femininity according to the traditional myths and cultural expectations. The hundreds of suitors, presuming Odysseus’s death due to his failure to return from Trojan War on time, assembled in Ithaca to marry Penelope. They not only exploited and ‘gobbled up’ and use the edibles and animals yet additionally ‘raped’ and ‘seduced’ several of the maids. They “helped themselves to the maids in the same way they helped themselves to the sheep and pigs and goats and cows” (TP 92).

These suitors who were of the age of Penelope’s son Telemachus treated her as no better than sexual commodity. From the modern day Hades, Penelope addresses Antonius’s intentions in proposing her to which he replies, “Widows are supposed to be consumed with lust” and “You could probably still squeezed out one or two little brats” (TP 81). Thus we see that the image of woman is constructed as that of sexual commodity that are sexually objectified and humiliated by men. It is explored that whereas gender and class exploitation not only leads to sexual abuse of maids but also results in their innocent hanging by those in power. Penelope’s Cousin Helen, in spite of her reputation and flirting nature escapes narrative justice in Homer’s The Odyssey.

Dissimilar to the Penelope of Homer’s The Odyssey who mitigates Helen’s guilt by expressing that “It was god [Aphrodite] who drove her to do [her] shameful deed”. Atwood doesn’t absolve Helen for her sin of exploiting men using the bait of her eternal feminine image. This rejects another stereotype of women as oppressed and subjugated, supporting the statement that women can be as strong and oppressive as men. This furnishes likewise with different and various masculinities and femininities which are performed not just by various people in similar conditions however by same people under various conditions.

Gender Roles in the Oddyssey