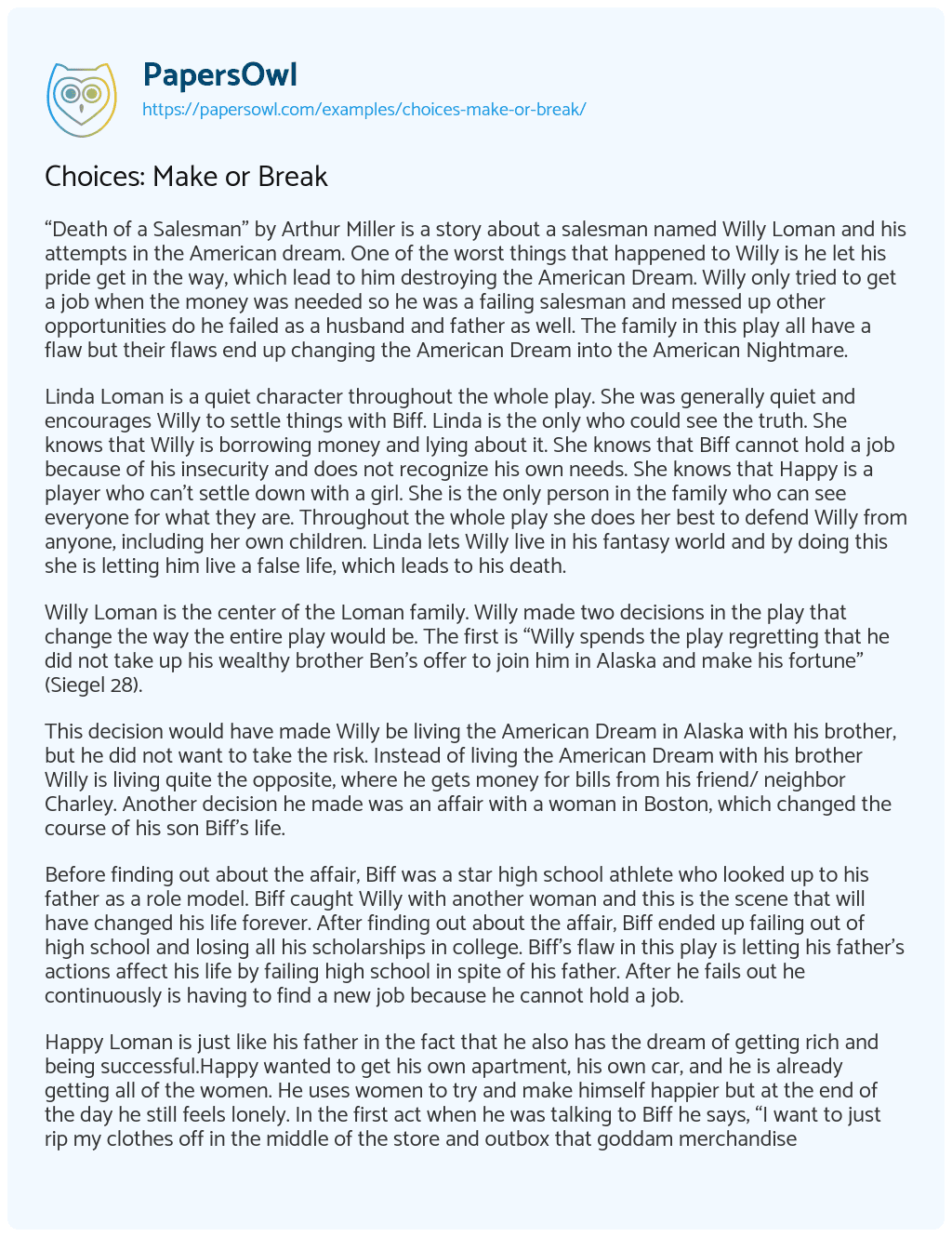 “Death of a Salesman” by Arthur Miller is a story about a salesman named Willy Loman and his attempts in the American dream. One of the worst things that happened to Willy is he let his pride get in the way, which lead to him destroying the American Dream. Willy only tried to get a job when the money was needed so he was a failing salesman and messed up other opportunities do he failed as a husband and father as well. The family in this play all have a flaw but their flaws end up changing the American Dream into the American Nightmare.

Linda Loman is a quiet character throughout the whole play. She was generally quiet and encourages Willy to settle things with Biff. Linda is the only who could see the truth. She knows that Willy is borrowing money and lying about it. She knows that Biff cannot hold a job because of his insecurity and does not recognize his own needs. She knows that Happy is a player who can’t settle down with a girl. She is the only person in the family who can see everyone for what they are. Throughout the whole play she does her best to defend Willy from anyone, including her own children. Linda lets Willy live in his fantasy world and by doing this she is letting him live a false life, which leads to his death.

Willy Loman is the center of the Loman family. Willy made two decisions in the play that change the way the entire play would be. The first is “Willy spends the play regretting that he did not take up his wealthy brother Ben’s offer to join him in Alaska and make his fortune” (Siegel 28).

This decision would have made Willy be living the American Dream in Alaska with his brother, but he did not want to take the risk. Instead of living the American Dream with his brother Willy is living quite the opposite, where he gets money for bills from his friend/ neighbor Charley. Another decision he made was an affair with a woman in Boston, which changed the course of his son Biff’s life.

Before finding out about the affair, Biff was a star high school athlete who looked up to his father as a role model. Biff caught Willy with another woman and this is the scene that will have changed his life forever. After finding out about the affair, Biff ended up failing out of high school and losing all his scholarships in college. Biff’s flaw in this play is letting his father’s actions affect his life by failing high school in spite of his father. After he fails out he continuously is having to find a new job because he cannot hold a job.

Happy Loman is just like his father in the fact that he also has the dream of getting rich and being successful.Happy wanted to get his own apartment, his own car, and he is already getting all of the women. He uses women to try and make himself happier but at the end of the day he still feels lonely. In the first act when he was talking to Biff he says, “I want to just rip my clothes off in the middle of the store and outbox that goddam merchandise manager.

I mean I can outbox, outrun, and outlift anybody in that store, and I have to take orders from those common, petty sons-of-bitches” (Miller 14). This is important because it leads to the flaw that is Happy’s. Happy’s flaw is that no matter what he does he is never happy or satisfied with anything, who also creates a fake reality to satisfy his own ego.

Willy ends up committing suicide so that he can get the money his family needs from the insurance company. The repercussions of this made Biff lose his will to roam from place to place jumping from job to job and decide to move and settle down. Happy is bitter at Biff for talking about WIlly in a negative light so he says he is taking the same path that Willy took until he dies. Linda became a widow and lost the one person she lost the most in this world. What was a happy family at the beginning of the play turned into a broken one because of the character’s flaws.