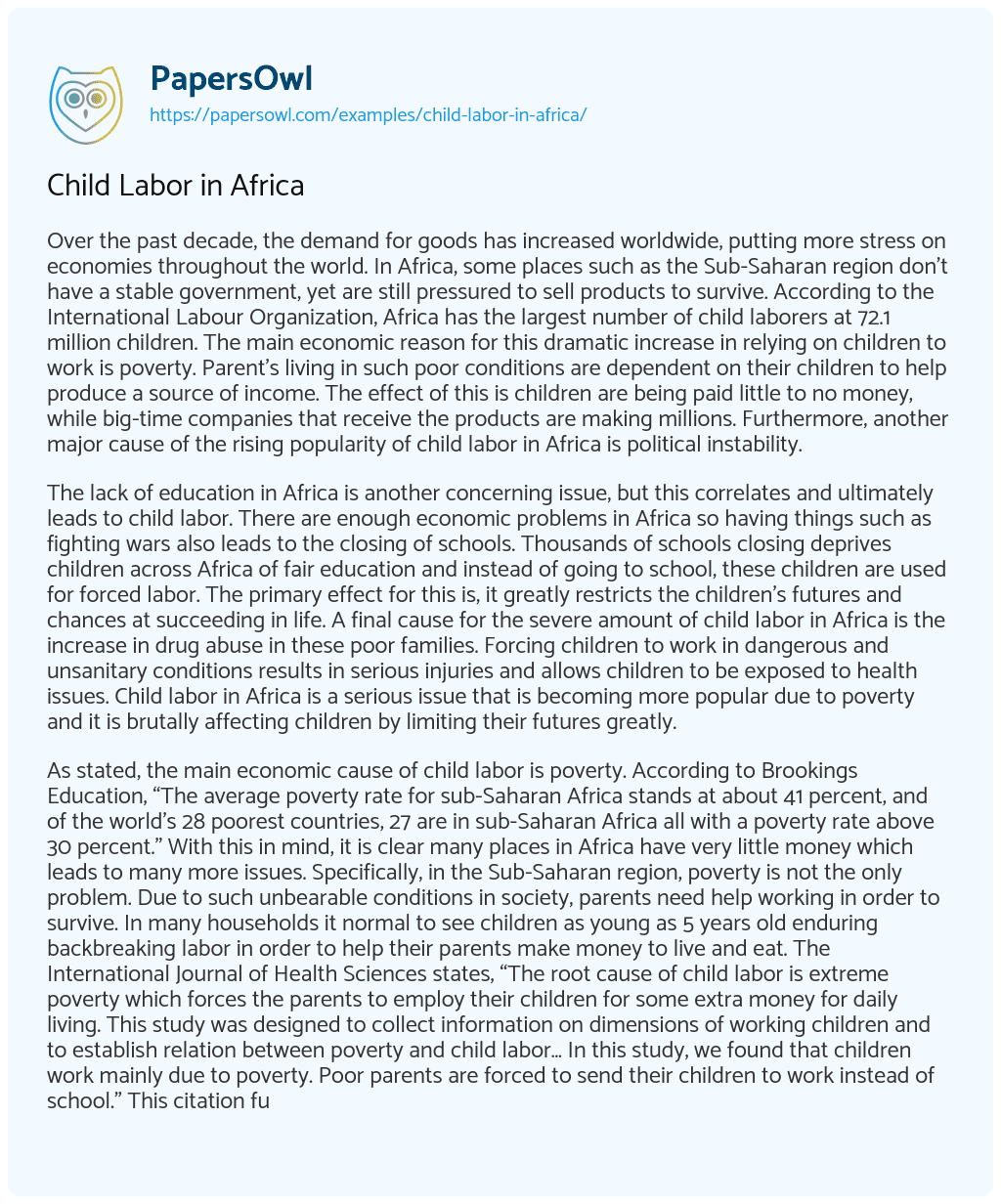 Over the past decade, the demand for goods has increased worldwide, putting more stress on economies throughout the world. In Africa, some places such as the Sub-Saharan region don’t have a stable government, yet are still pressured to sell products to survive. According to the International Labour Organization, Africa has the largest number of child laborers at 72.1 million children. The main economic reason for this dramatic increase in relying on children to work is poverty. Parent’s living in such poor conditions are dependent on their children to help produce a source of income. The effect of this is children are being paid little to no money, while big-time companies that receive the products are making millions. Furthermore, another major cause of the rising popularity of child labor in Africa is political instability.

The lack of education in Africa is another concerning issue, but this correlates and ultimately leads to child labor. There are enough economic problems in Africa so having things such as fighting wars also leads to the closing of schools. Thousands of schools closing deprives children across Africa of fair education and instead of going to school, these children are used for forced labor. The primary effect for this is, it greatly restricts the children’s futures and chances at succeeding in life. A final cause for the severe amount of child labor in Africa is the increase in drug abuse in these poor families. Forcing children to work in dangerous and unsanitary conditions results in serious injuries and allows children to be exposed to health issues. Child labor in Africa is a serious issue that is becoming more popular due to poverty and it is brutally affecting children by limiting their futures greatly.

As stated, the main economic cause of child labor is poverty. According to Brookings Education, “The average poverty rate for sub-Saharan Africa stands at about 41 percent, and of the world’s 28 poorest countries, 27 are in sub-Saharan Africa all with a poverty rate above 30 percent.” With this in mind, it is clear many places in Africa have very little money which leads to many more issues. Specifically, in the Sub-Saharan region, poverty is not the only problem. Due to such unbearable conditions in society, parents need help working in order to survive. In many households it normal to see children as young as 5 years old enduring backbreaking labor in order to help their parents make money to live and eat. The International Journal of Health Sciences states, “The root cause of child labor is extreme poverty which forces the parents to employ their children for some extra money for daily living. This study was designed to collect information on dimensions of working children and to establish relation between poverty and child labor… In this study, we found that children work mainly due to poverty. Poor parents are forced to send their children to work instead of school.” This citation further supports the claim that poverty is the main cause of child labor by proving how there was a professional study in which random children were questioned in hard working environments. Their results were that more than 80% of the children being forced to work were from poor families, which was higher than any other reason for child labor. Parents with little income are not able to support themselves and their families without their children’s help. Child labor has a clear relation to poverty and has many negative economic effects.

A primary economic effect of child labor is that children are being taken advantage of by working long hours for very minimal pay. In Africa, poverty is the most well known economic issue but was isn’t so known is how many children are being taken advantage of. According to SOS Children’s Villages, “The World Bank estimates that between 45 and 50 percent of people in sub-Saharan Africa live below the poverty line, ie they have to live on less than $ 1.25 a day. This makes the sub-Saharan region the poorest region in the world.” This citation not only demonstrates how poor some people in Africa are, but it also shows how much money families with children being forced to work make. Some children as young as 5 years old are being forced to work 10- 12 hour days. If the average person (meaning adult) is having to live us less than $1.25 a day, it’s impossible to imagine how much a 5-year-old is making. In many cases these innocent children aren’t even being paid but if they’re lucky they get small portions of food in exchange for their work. Another effect child labor has on the economy is that children aren’t compensated for the work which leads to lawsuits with major companies. For example, the cocoa industry in Africa is one of the world’s largest industries. An article on the cocoa industry in Africa by San Antonio News states, “Sixty percent or more of the world’s cocoa is produced in the Ivory Coast and Ghana in West Africa. These countries are notorious for the worst forms of child slavery. An estimated 1.9 million children are engaged in forced labor on the Ivory Coast alone… In 2016, consumers filed class-action lawsuits — meaning they grouped together the claims of all consumers — against Mars, Nestlé and Hershey’s. They argued that by failing to disclose the use of child labor in their supply chain, these companies were violating California’s consumer production laws.” This quote illustrates how much of some of the products like cocoa, are being produced in places with outrageous amounts of child labor. More than half of the entire world’s cocoa is being produced in one of the most well-known places in Africa for child labor where children are making less than a $1.25 a day. Big time companies that buy the cocoa are aware of these problems, yet still, purchase the products which further results in legal disputes.

Another underlying cause of child labor in Africa is political instability. Although this isn’t the case for all of Africa, education isn’t known to be prestigious in most parts. Many children and teenagers are not in school for different reasons: some can’t afford it, for others, there is no schooling available due to fighting wars and budget cuts, and finally, others are forced to work from a young age. Africa’s political crisis of fighting wars has many repercussions such as the closing of many schools. According to All Africa, “The number of schools forced to shut in Africa’s crisis-hit Sahel has doubled since 2017, depriving almost half a million children of education. Some 10,050 teachers are unable to work or forced to flee their homes due to the crisis, UNICEF added.” This further demonstrates that the effect of the government closing all these schools in Africa is innocent children are being stripped of a fair future. With the lack of education, these children seem useless to society so they are forced into hard labor. In many cases, teachers are being forced to flee because there is no work, but the children can’t just leave. They need to produce for their families and society, so instead of doing nothing, they are put to work which further shows how political instability part of the reason for child labor.

Due to the lack of stability in the African governments, there are major political effects on the children who are forced to work. When schools close, children are not learning what they need to be which ultimately leads to a very concerning issue of jeopardizing their futures. Missing school is one thing, but growing up and not going to school once is very serious. Instead of going to school many of the children are required to be beneficial to society, so they are forced to do hard labor. Working from such a young age holds a child back in society. They fall behind and the only thing they know is physical labor. In addition, being denied education is not the only effect. Many of the children’s rights are constantly being violated and the government is doing very little to protect them. According to the African Center for Economic Transformation Organization, “Given the limited enforcement of laws governing child labor in mines, many suppliers, traders, and international companies buying minerals from Africa have done little to disentangle themselves from the exploits of child labor… African governments are obligated to protect and uphold the rights of their children, which includes protecting them from the worst forms of child labor such as working in hazardous conditions.” This citation proves how the children responsible for dangerous work are not being protected by their own government. They are not only suffering but are also having their rights their rights violated. Despite how morally wrong this is, other international companies that are aware of this situation, continue to still purchase the products.

A final cause for child labor in Africa is the increase in alcohol and drug abuse in poor families. As previously discussed, many families are in serious debts and living in poor conditions due to poverty. They are already making barely enough to survive, yet some decide to purchase drugs and alcohol instead of food for their children. For example, Poverties.org states, “…the same causes of child labour in South Africa: high unemployment and poverty. Add to that widespread alcohol and drug abuse – the perfect tools of indoctrination and control…”.