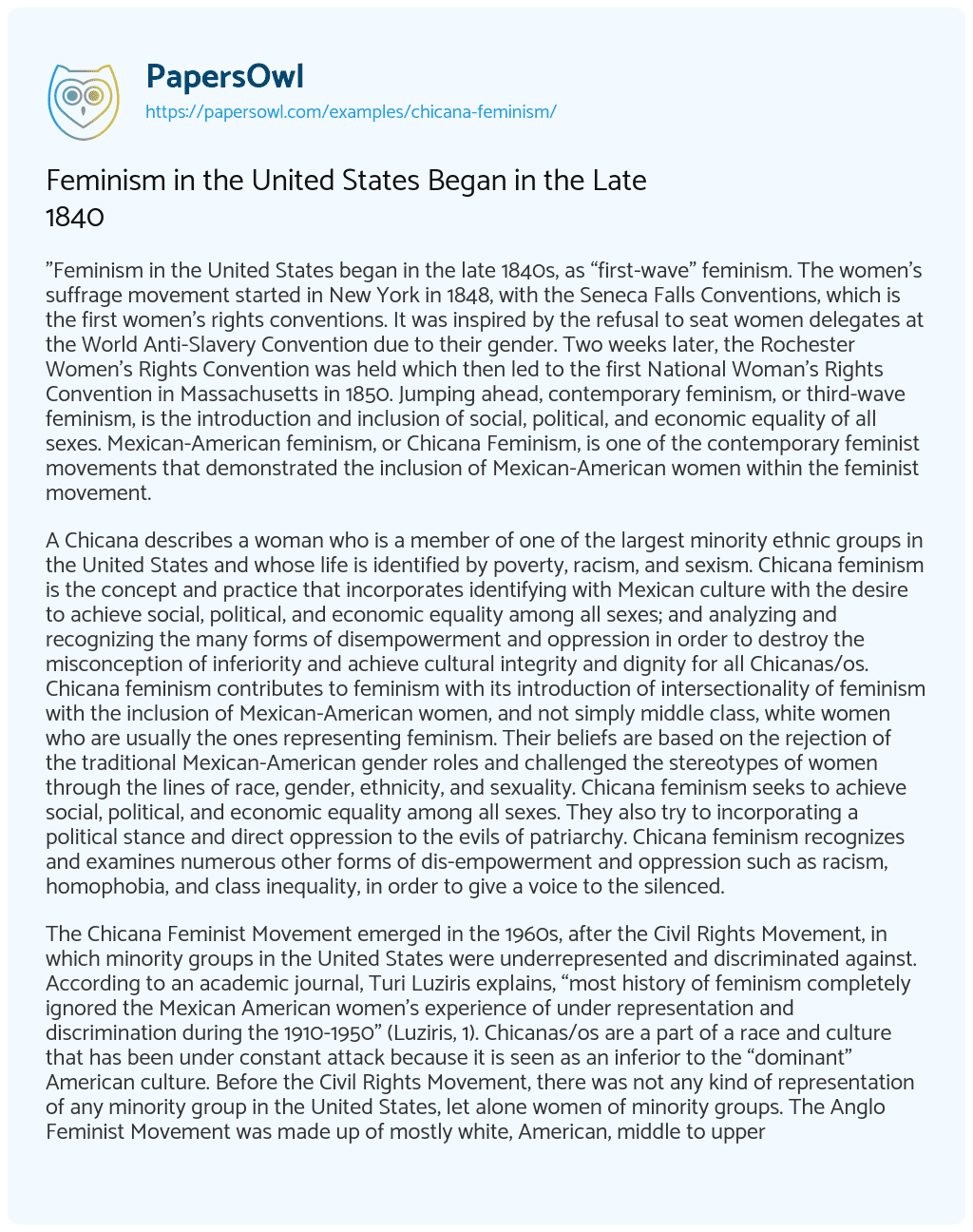 “Feminism in the United States began in the late 1840s, as “first-wave” feminism. The women’s suffrage movement started in New York in 1848, with the Seneca Falls Conventions, which is the first women’s rights conventions. It was inspired by the refusal to seat women delegates at the World Anti-Slavery Convention due to their gender. Two weeks later, the Rochester Women’s Rights Convention was held which then led to the first National Woman’s Rights Convention in Massachusetts in 1850. Jumping ahead, contemporary feminism, or third-wave feminism, is the introduction and inclusion of social, political, and economic equality of all sexes. Mexican-American feminism, or Chicana Feminism, is one of the contemporary feminist movements that demonstrated the inclusion of Mexican-American women within the feminist movement.

A Chicana describes a woman who is a member of one of the largest minority ethnic groups in the United States and whose life is identified by poverty, racism, and sexism. Chicana feminism is the concept and practice that incorporates identifying with Mexican culture with the desire to achieve social, political, and economic equality among all sexes; and analyzing and recognizing the many forms of disempowerment and oppression in order to destroy the misconception of inferiority and achieve cultural integrity and dignity for all Chicanas/os. Chicana feminism contributes to feminism with its introduction of intersectionality of feminism with the inclusion of Mexican-American women, and not simply middle class, white women who are usually the ones representing feminism. Their beliefs are based on the rejection of the traditional Mexican-American gender roles and challenged the stereotypes of women through the lines of race, gender, ethnicity, and sexuality. Chicana feminism seeks to achieve social, political, and economic equality among all sexes. They also try to incorporating a political stance and direct oppression to the evils of patriarchy. Chicana feminism recognizes and examines numerous other forms of dis-empowerment and oppression such as racism, homophobia, and class inequality, in order to give a voice to the silenced.

The Chicana Feminist Movement emerged in the 1960s, after the Civil Rights Movement, in which minority groups in the United States were underrepresented and discriminated against. According to an academic journal, Turi Luziris explains, “most history of feminism completely ignored the Mexican American women’s experience of under representation and discrimination during the 1910-1950” (Luziris, 1). Chicanas/os are a part of a race and culture that has been under constant attack because it is seen as an inferior to the “dominant” American culture. Before the Civil Rights Movement, there was not any kind of representation of any minority group in the United States, let alone women of minority groups. The Anglo Feminist Movement was made up of mostly white, American, middle to upper class women who fought for the equality of women in labor unions, government, and employment. However, they failed to acknowledge factors such as race, ethnicity, sexuality, and class and how these factors correlated with the oppression of certain groups of people. This lack of representation of minority women led them to start their own movement that included minority groups specifically Mexican-American women. They desired to destroy their perception of inferiority in order to attain cultural integrity and dignity for all Chicanas/os.

Even though first wave feminism started in the 1848 and ran until around 1920, it was primarily focused on the suffrage of white women. This led to the separation of Mexican American women from the white feminist movement because they would not address discrimination based on race and class within that movement. It wasn’t until second wave feminism arose that feminism shifted in the focus to include race and sexuality. According to a journal article on Chicana Feminism, Paula Moya says, “As a distinct social movement, Chicana feminism emerged primarily in response to the sexism Chicanas experienced within the Chicano civil rights movement” (Moya, 446). The Chicano Movement aimed for the embracement of the Chicano community and their cultural nationalism. However, it was mainly a male-centered movement and ignored the imprints of Chicana issues. Chicana feminism not only arose from the lack of representation of Mexican-American women during first wave feminism, but also from the sexism Chicana’s faced during the Chicano Movement. Chicana feminism emerged and created their own branch of feminism that serves as a middle ground between both the Chicano Movement and the Women’s Liberation Movement and recognized Chicanas valuable assets within their community. By the mid 1970s Chicana feminism had distanced themselves from the white feminist groups and developed their own feminist organization that worked within the Chicano community. With the continuous growth of the Chicana feminist group, they formed the Chicana Rights Project (CRP) of the Mexican American Legal Defense and the Education Fund (MALDEF) in June of 1974. According to the book, Separate Roads to Feminism, “The CPR was meant to be an arm of the organization that focused on the needs of Chicanas, particularly educational and employment issues … on behalf of the Civil Rights of Chicanas” (Roth, 172). They also help coordinate the Sixth National Conference on Women and the Law where they provided workshops, counseling, and information for the Chicana women on their legal issues. The Chicana Rights Project help with the progression of Chicana feminism and provided outlets for Chicana women to learn about their legal issues.

By the 1980s, third wave feminism was in full swing. Chicanas feminist during third wave feminism was a unique and fluid identity in which she preservers her cultural beliefs which absorbs her new realities in this modern world. Chicanas began embracing individualism and diversity. They recognized class, culture, and gender equally and do not see one as superior to the other. According to a journal by Ian Brusenhan, “Mexican woman has her own surprises, some of which included economic opportunity, changes within family dynamics, identity change, discrimination and much more” (Brusenhan). Although Chicanas were still facing discrimination and underrepresentation, Chicana feminist was progressing and positively influencing the Chicano community. Not only were Chicanas progressing through many changes, they were also able to express themselves through different outlooks. Political discussions and feminist literature play a huge role in the Chicana Feminist movement. They also expressed themselves through poetry, artwork, film, and literature. A couple of famous Chicana activists include Dolores Huerta, who was the only women to sit on the executive board of the United Farm Workers, Gloria E. Anzaldúa, who is an author/poet who co-edited This Bridge Called My Back, a feminist classic, and Antonia Hernández, a big civil rights’ lawyer who has been a part of many major civil rights cases affecting the Hispanic community. These women are a huge influence and inspiration within the Hispanic community. Chicana feminism under third wave feminism has definitely progressed since the beginning. Gender roles have modernized making some women the breadwinners of their household. While racist behavior is still around today, it has definitely become not socially acceptable to be racist, homophobic, and sexist anymore which, in turn, has provided Chicanas a safe space to express themselves and be representing within American society. For example, the tv shows, Jane the Virgin and One Day At A Time, are groundbreaking comedies that are centered around Hispanic families and cultures. With hispanic population being the largest minority group in the United States, this inclusivity of hispanic representation within American culture has demonstrated that the Chicana Feminist movement has made an impact on American culture.

In class we discussed different forms of contemporary feminism including Rosie the Riveter, Dolores Huerta, and Luisa Capetillo. As form or branch of contemporary feminism, Chicana feminism has many connections to the other types of feminism. A big concept we discussed in class related to Chicana feminism and other forms of contemporary feminism is the breakout of stereotype gender roles. Before WWII, women stereotypical gender roles would include household work while men worked as the household breadwinner. Once the war began and men were being shipped off, there was an increase in labor demand which led to Americans rethinking of how women and men should think, look, and behave and what roles they should be playing in the family and in their communities. Women were now seen a Rosie the Riveter type which was a strong, self assuring women who can roll up her sleeves and do the dirty work. This was a big victory for women during that time. However, even though women were taking of male jobs in the factories, the were not getting pay the same amount as the men. By the end of the war, the men returned to their homes looking for work. After all their hard work and progress that was happening for women’s equalities, they kicked out most of the women to give the men their jobs back which led to women returning to domestic work. Even though women returned to domestic work, this was a huge win for feminism through a new understanding of gender roles and the emergence contemporary feminism.

Another huge concepts that relates to Chicana feminism and the other forms of contemporary feminism is the gender pay gap. Due to the Chicana Feminist movement, women are breaking of their stereotype gender roles and entering the workforce. However, have been fighting for equal pay in the workforce due to men getting back more for the same job. According to one of Professor Nasstrom’s lecture, in 2017, the average difference between what women and men are paid is about 80%. This earnings’ ratio varies based on ethnicity, job, sexuality, race, and other factors. In fact, Hispanic/Latino women are facing the largest wage gap among women of all races. Compared to white men, Hispanic women are paid 53 cents on every dollar. The gender wage gap goes beyond just low-wage workers and its affecting women at every level and hurting their families. It is making Hispanic women, especially single heads of household more vulnerable to poverty. Chicana feminism is fighting this problem to endure economic security for their futures.”

Feminism in the United States Began in the Late 1840. (2021, Feb 24). Retrieved from https://papersowl.com/examples/chicana-feminism/