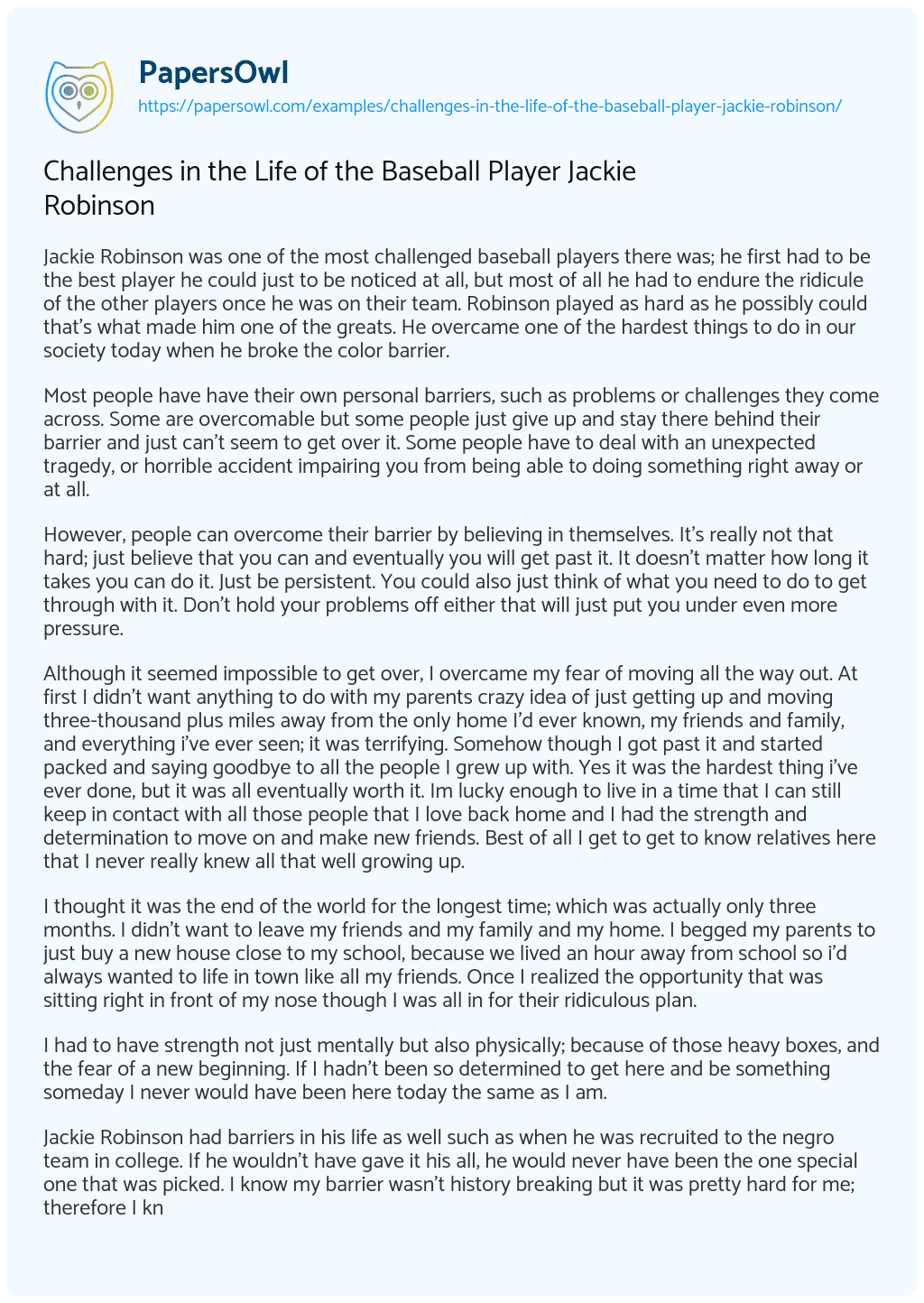 Jackie Robinson was one of the most challenged baseball players there was; he first had to be the best player he could just to be noticed at all, but most of all he had to endure the ridicule of the other players once he was on their team. Robinson played as hard as he possibly could that’s what made him one of the greats. He overcame one of the hardest things to do in our society today when he broke the color barrier.

Most people have have their own personal barriers, such as problems or challenges they come across. Some are overcomable but some people just give up and stay there behind their barrier and just can’t seem to get over it. Some people have to deal with an unexpected tragedy, or horrible accident impairing you from being able to doing something right away or at all.

However, people can overcome their barrier by believing in themselves. It’s really not that hard; just believe that you can and eventually you will get past it. It doesn’t matter how long it takes you can do it. Just be persistent. You could also just think of what you need to do to get through with it. Don’t hold your problems off either that will just put you under even more pressure.

Although it seemed impossible to get over, I overcame my fear of moving all the way out. At first I didn’t want anything to do with my parents crazy idea of just getting up and moving three-thousand plus miles away from the only home I’d ever known, my friends and family, and everything i’ve ever seen; it was terrifying. Somehow though I got past it and started packed and saying goodbye to all the people I grew up with. Yes it was the hardest thing i’ve ever done, but it was all eventually worth it. Im lucky enough to live in a time that I can still keep in contact with all those people that I love back home and I had the strength and determination to move on and make new friends. Best of all I get to get to know relatives here that I never really knew all that well growing up.

I thought it was the end of the world for the longest time; which was actually only three months. I didn’t want to leave my friends and my family and my home. I begged my parents to just buy a new house close to my school, because we lived an hour away from school so i’d always wanted to life in town like all my friends. Once I realized the opportunity that was sitting right in front of my nose though I was all in for their ridiculous plan.

I had to have strength not just mentally but also physically; because of those heavy boxes, and the fear of a new beginning. If I hadn’t been so determined to get here and be something someday I never would have been here today the same as I am.

Jackie Robinson had barriers in his life as well such as when he was recruited to the negro team in college. If he wouldn’t have gave it his all, he would never have been the one special one that was picked. I know my barrier wasn’t history breaking but it was pretty hard for me; therefore I know he must have made a really hard time getting that far in his life.

Challenges in the Life of the Baseball Player Jackie Robinson. (2022, Nov 23). Retrieved from https://papersowl.com/examples/challenges-in-the-life-of-the-baseball-player-jackie-robinson/