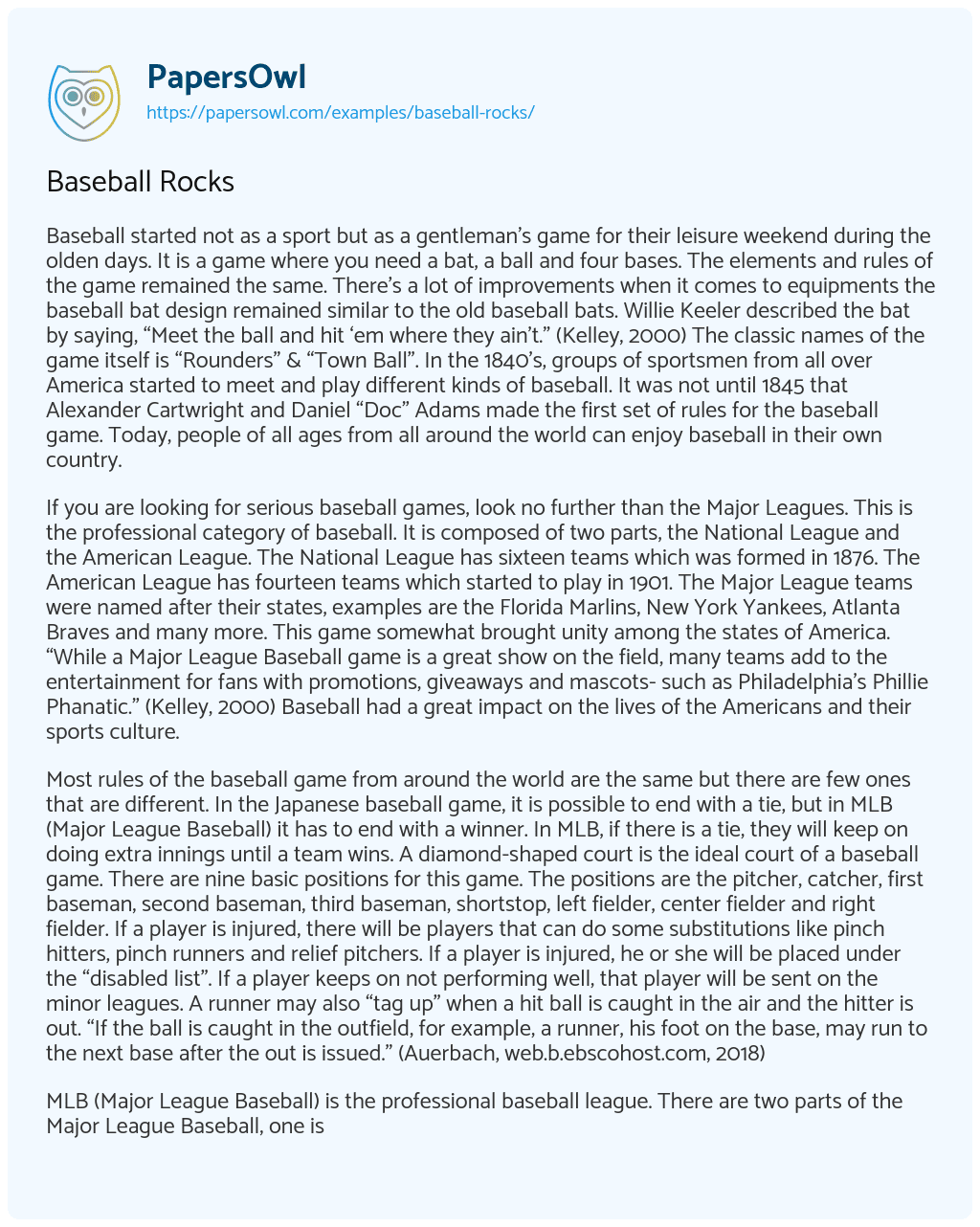 Baseball started not as a sport but as a gentleman’s game for their leisure weekend during the olden days. It is a game where you need a bat, a ball and four bases. The elements and rules of the game remained the same. There’s a lot of improvements when it comes to equipments the baseball bat design remained similar to the old baseball bats. Willie Keeler described the bat by saying, “Meet the ball and hit ‘em where they ain’t.” (Kelley, 2000) The classic names of the game itself is “Rounders” & “Town Ball”. In the 1840’s, groups of sportsmen from all over America started to meet and play different kinds of baseball. It was not until 1845 that Alexander Cartwright and Daniel “Doc” Adams made the first set of rules for the baseball game. Today, people of all ages from all around the world can enjoy baseball in their own country.

If you are looking for serious baseball games, look no further than the Major Leagues. This is the professional category of baseball. It is composed of two parts, the National League and the American League. The National League has sixteen teams which was formed in 1876. The American League has fourteen teams which started to play in 1901. The Major League teams were named after their states, examples are the Florida Marlins, New York Yankees, Atlanta Braves and many more. This game somewhat brought unity among the states of America. “While a Major League Baseball game is a great show on the field, many teams add to the entertainment for fans with promotions, giveaways and mascots- such as Philadelphia’s Phillie Phanatic.” (Kelley, 2000) Baseball had a great impact on the lives of the Americans and their sports culture.

Most rules of the baseball game from around the world are the same but there are few ones that are different. In the Japanese baseball game, it is possible to end with a tie, but in MLB (Major League Baseball) it has to end with a winner. In MLB, if there is a tie, they will keep on doing extra innings until a team wins. A diamond-shaped court is the ideal court of a baseball game. There are nine basic positions for this game. The positions are the pitcher, catcher, first baseman, second baseman, third baseman, shortstop, left fielder, center fielder and right fielder. If a player is injured, there will be players that can do some substitutions like pinch hitters, pinch runners and relief pitchers. If a player is injured, he or she will be placed under the “disabled list”. If a player keeps on not performing well, that player will be sent on the minor leagues. A runner may also “tag up” when a hit ball is caught in the air and the hitter is out. “If the ball is caught in the outfield, for example, a runner, his foot on the base, may run to the next base after the out is issued.” (Auerbach, web.b.ebscohost.com, 2018)

MLB (Major League Baseball) is the professional baseball league. There are two parts of the Major League Baseball, one is the American League and the other one is the National League. These leagues are segregated into three different divisions, West, Central and East. Each division has five teams which play 162 games each season. “Most of the differences between professional baseball leagues, however, are philosophical rather than regulatory, as the game is typically played in line with MLB rules and regulations.” (Auerbach, web.b.ebscohost.com, 2018).

Steroid Scandal was an issue during the 90’s on baseball world. Steroid is a drug that can make a person to be more muscular and strong. Doctors can give you steroids if your body needs it but, using steroids yourself is not allowed especially in sports. It’s a form of cheating. It started as a rumor that baseball players were using steroids to be better in playing the sport. A famous player named Barry Bonds testified to the jury that

he was unaware of taking steroids. “Other prominent players whose accomplishments were called into question by the steroid issue included Mark McGwire and Sammy Sosa.” (school.eb.com, 2011). Since then, the congressional panel, the baseball commissioner and the director of the players’ union became very strict about the consequences of steroid use. Players and management were responsible to the “steroids era”.

Indeed, baseball is a big part of the American culture. A lot of fans followed the stories, issues and the scandals of the famous players and their teams. Their stories became the headlines of newspapers and TV shows! This sport became the source of inspirations of America’s exceptional literature, songs and films. Baseball is best described as “America’s Favorite Pastime”.

The Rise of Baseball