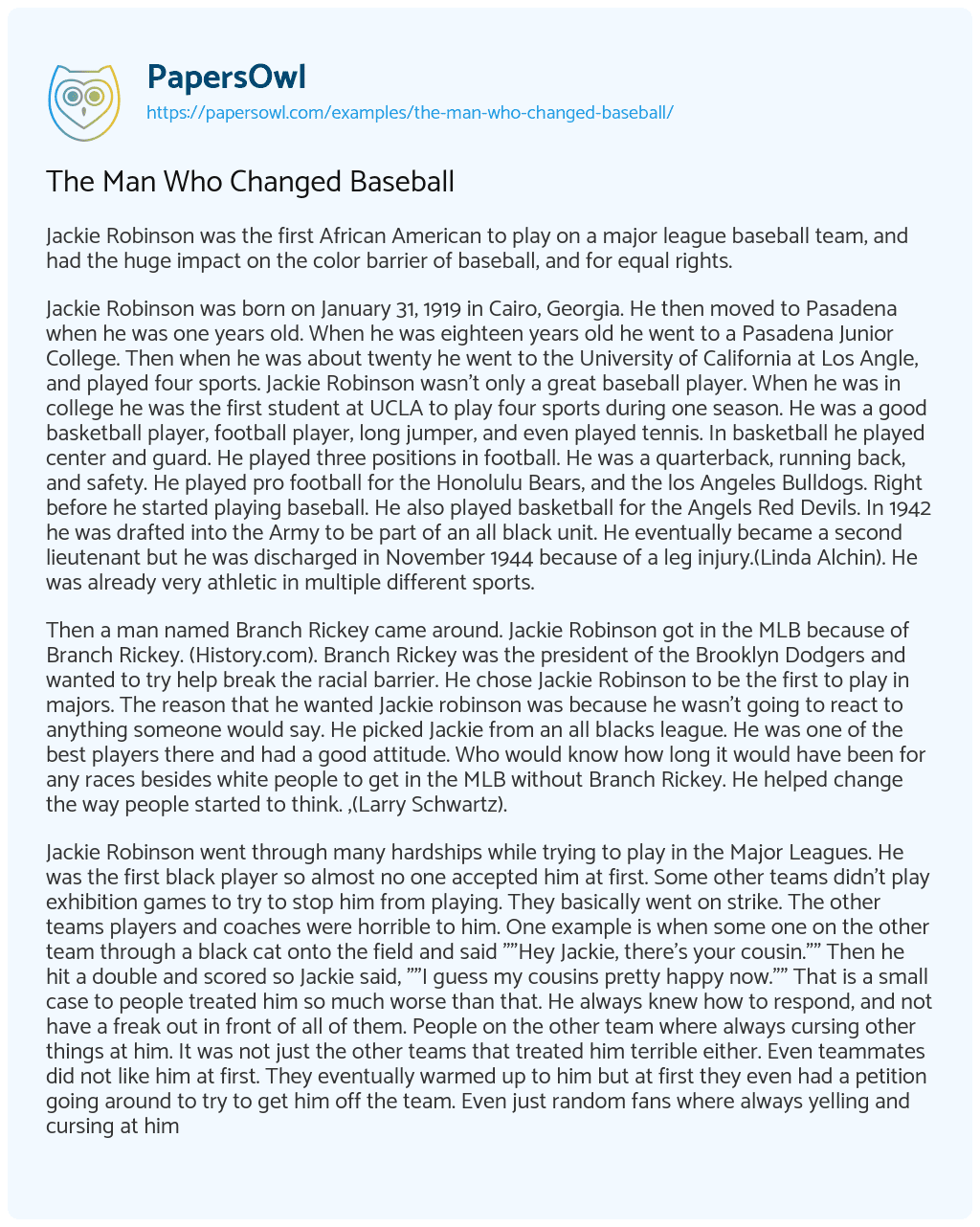 Jackie Robinson was the first African American to play on a major league baseball team, and had the huge impact on the color barrier of baseball, and for equal rights.

Jackie Robinson was born on January 31, 1919 in Cairo, Georgia. He then moved to Pasadena when he was one years old. When he was eighteen years old he went to a Pasadena Junior College. Then when he was about twenty he went to the University of California at Los Angle, and played four sports. Jackie Robinson wasn’t only a great baseball player. When he was in college he was the first student at UCLA to play four sports during one season. He was a good basketball player, football player, long jumper, and even played tennis. In basketball he played center and guard. He played three positions in football. He was a quarterback, running back, and safety. He played pro football for the Honolulu Bears, and the los Angeles Bulldogs. Right before he started playing baseball. He also played basketball for the Angels Red Devils. In 1942 he was drafted into the Army to be part of an all black unit. He eventually became a second lieutenant but he was discharged in November 1944 because of a leg injury.(Linda Alchin). He was already very athletic in multiple different sports.

Then a man named Branch Rickey came around. Jackie Robinson got in the MLB because of Branch Rickey. (History.com). Branch Rickey was the president of the Brooklyn Dodgers and wanted to try help break the racial barrier. He chose Jackie Robinson to be the first to play in majors. The reason that he wanted Jackie robinson was because he wasn’t going to react to anything someone would say. He picked Jackie from an all blacks league. He was one of the best players there and had a good attitude. Who would know how long it would have been for any races besides white people to get in the MLB without Branch Rickey. He helped change the way people started to think. ,(Larry Schwartz).

Jackie Robinson went through many hardships while trying to play in the Major Leagues. He was the first black player so almost no one accepted him at first. Some other teams didn’t play exhibition games to try to stop him from playing. They basically went on strike. The other teams players and coaches were horrible to him. One example is when some one on the other team through a black cat onto the field and said “”Hey Jackie, there’s your cousin.”” Then he hit a double and scored so Jackie said, “”I guess my cousins pretty happy now.”” That is a small case to people treated him so much worse than that. He always knew how to respond, and not have a freak out in front of all of them. People on the other team where always cursing other things at him. It was not just the other teams that treated him terrible either. Even teammates did not like him at first. They eventually warmed up to him but at first they even had a petition going around to try to get him off the team. Even just random fans where always yelling and cursing at him. He got many different threats but didn’t react and never quit. (Baseball Hall of Fame).

But while this was happening jackie was playing amazing. In his lifetime career he had 1,518 hits, 273 doubles, 54 triples, 137 homeruns, 773 RBI’s, and 740 walks. That’?› very impressive even today. People eventually discovered the truth and started to realize that it doesn’t matter what color you are. There was always a form of racism after him, but he definitely started to open people’s eyes and warm the up. (Larry Schwartz).

He first started to play baseball on the Brooklyn Dodgers on April 15, 1947. There was segregation in baseball for more the 60 years before Jackie Robinson started to played. He was the first black baseball player in the major league who played in the MLB, and was the first black player to win a battle title, the MVP, and to be in the baseball hall of fame. He was the to get the Rookie of the year award and the fist baseball player ever to be on a United States stamp. Jackie Robinson made the path for all the black athletes after him. No other athlete has impacted America like jackie robinson. He was able to stand up for his rights in a time where almost no one else could. A reason he was able to stand up for himself he was determined to make a difference, and fight for what he believes in. (Rick Swayne).

He decided to retire in 1956. He was then a vocal supporter of Martin Luther King Jr. and the National Association for supporting Colored People. In 1962 he was inducted into the Baseball Hall of Fame.(Linda Alchin).

So as you can see Jackie Robinson was a great baseball player. Not only was he great at the game but he was a great person all around. He played four sports in college, and became the first black baseball player, He made a path for everyone after him, and helped change the way that a lot of people thought. Unfortunately on October 24, 1972 Jackie Robinson died of a heart attack when he was only fifty three years old, but his legacy, and the impact he made will live on for a very long time.

Jackie Robinson was the first African American to play on a major league baseball team, and had the huge impact on the color barrier of baseball, and for equal rights.

The Man Who Changed Baseball. (2019, Nov 19). Retrieved from https://papersowl.com/examples/the-man-who-changed-baseball/