Another Form of Terrorism 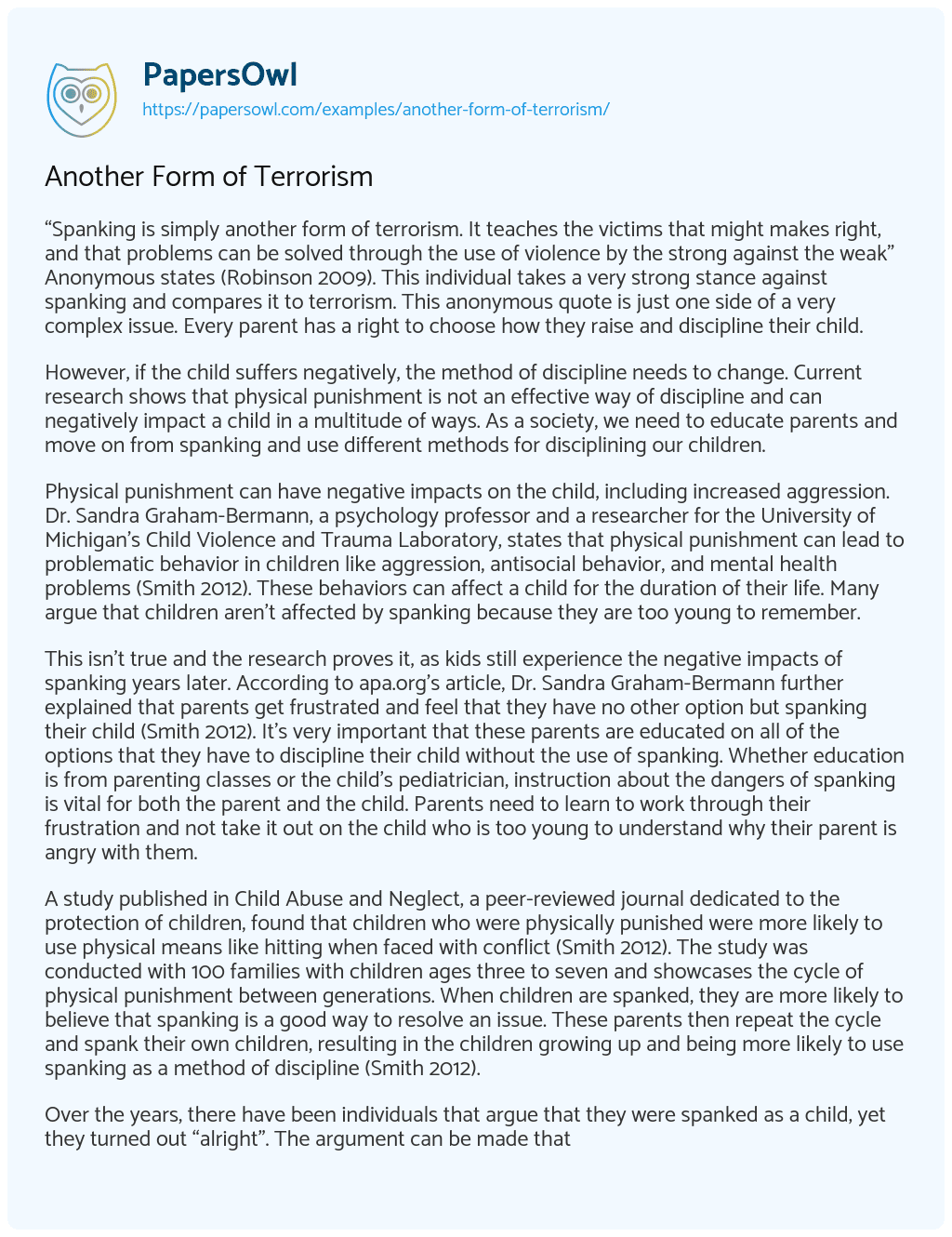 “Spanking is simply another form of terrorism. It teaches the victims that might makes right, and that problems can be solved through the use of violence by the strong against the weak” Anonymous states (Robinson 2009). This individual takes a very strong stance against spanking and compares it to terrorism. This anonymous quote is just one side of a very complex issue. Every parent has a right to choose how they raise and discipline their child.

However, if the child suffers negatively, the method of discipline needs to change. Current research shows that physical punishment is not an effective way of discipline and can negatively impact a child in a multitude of ways. As a society, we need to educate parents and move on from spanking and use different methods for disciplining our children.

Physical punishment can have negative impacts on the child, including increased aggression. Dr. Sandra Graham-Bermann, a psychology professor and a researcher for the University of Michigan’s Child Violence and Trauma Laboratory, states that physical punishment can lead to problematic behavior in children like aggression, antisocial behavior, and mental health problems (Smith 2012). These behaviors can affect a child for the duration of their life. Many argue that children aren’t affected by spanking because they are too young to remember.

This isn’t true and the research proves it, as kids still experience the negative impacts of spanking years later. According to apa.org’s article, Dr. Sandra Graham-Bermann further explained that parents get frustrated and feel that they have no other option but spanking their child (Smith 2012). It’s very important that these parents are educated on all of the options that they have to discipline their child without the use of spanking. Whether education is from parenting classes or the child’s pediatrician, instruction about the dangers of spanking is vital for both the parent and the child. Parents need to learn to work through their frustration and not take it out on the child who is too young to understand why their parent is angry with them.

A study published in Child Abuse and Neglect, a peer-reviewed journal dedicated to the protection of children, found that children who were physically punished were more likely to use physical means like hitting when faced with conflict (Smith 2012). The study was conducted with 100 families with children ages three to seven and showcases the cycle of physical punishment between generations. When children are spanked, they are more likely to believe that spanking is a good way to resolve an issue. These parents then repeat the cycle and spank their own children, resulting in the children growing up and being more likely to use spanking as a method of discipline (Smith 2012).

Over the years, there have been individuals that argue that they were spanked as a child, yet they turned out “alright”. The argument can be made that these individuals haven’t necessarily turned out “alright” if they believe that spanking a child is an appropriate punishment. Just like the study published in Child Abuse and Neglect journal shows, the cycle of abuse is passed down, so these people believe that hitting a child is okay because they experienced the same in their childhood. Education is the only way to stop this cycle for good.

With any study, there comes opposition. Dr. Robert Larzelere, a professor who studies parental discipline at Oklahoma University, disagrees with the study published in the Child Abuse and Neglect journal. Dr. Larzelere agrees that parents should reduce physical punishment, but he states that the study only proves correlation, not causation. He stated that the study didn’t do enough to discriminate against non-abusive and abusive types of punishment.

There are a few studies that claim that spanking is “okay”, while there are a whole host of studies that claim the opposite and show that spanking can negatively impact children. It is vital to consider what the most up to date and credible research demonstrates. Currently, the greater part of research illustrates that there are negative impacts such as aggression that permanently affect children who are spanked.

Along with increased aggression, physical punishment like spanking can lead to increased depression and other mood disorders in the child later in life. Psych Central is a website dedicated to providing mental health resources and information. An article posted on this website written by Traci Pederson discusses a 2012 government survey conducted by Dr. Tracie Afifi at the University of Manitoba in Canada. This study surveyed 35,000 adults in the United States between 2004 and 2005. 1,300 of the participants experienced physical punishment such as spanking, pushing, slapping.

The results showed that 20% of those who were physically punished had experienced depression and 43% had abused alcohol in their life. This is compared to 16% of the individuals who didn’t receive physical punishment as a child who reported experiencing depression, and only 30% had experienced alcohol abuse (Pederson 2018). It is very important to note that even in absence of sexual abuse, emotional abuse, and physical abuse, these results still found that the child was at risk for developing mood disorders or alcohol abuse (Pederson 2018).

To put it simply, the results of this survey showed that those who weren’t spanked experienced lower rates of depression and alcohol abuse. Depression and alcohol abuse are serious issues that can affect an individual for a lifetime and can even result in death. Isn’t it fair to give your child the best chance at not experiencing these problems by using alternative methods than spanking? The statement “better safe than sorry” can be applied to this decision a parent has a choice to make.

An article posted on the University of Texas at Austin’s news page discusses a 2016 study published in the Journal of Family Psychology (Gershoff 2017). Elizabeth Gershoff, a co-author of the study, claims that it is the most complete and informative analysis of the outcomes of spanking to date. (Gershoff 2017). This study looked at over 50 years of research that included over 160,000 children. It’s important to note that this study only focused on spanking, and not abusive behaviors. Elizabeth and her co-author Andrew Grogan-Kaylor found that spanking was linked with thirteen of the seventeen outcomes that they were researching.

This study is important because it confirmed the research already out there that found that spanking leads to negative outcomes like anti-social behavior and mental health problems in children. Gershoff and Kaylor state that their research shows that spanking is linked to the negative outcomes of childhood abuse, but to a lesser degree (Gershoff 2017). That is a very strong conclusion made by the authors of the study, comparing the impacts of spanking to child abuse.

Although they found the impacts to be of a lesser degree, they still came to the conclusion that the impacts are similar and comparable. Parents who spank their children seem to rationalize what they are doing. This study leaves little for a parent to rationalize when researchers like Gershoff and Kaylor can make such a strong statement against spanking and back that up with research.

Other methods of discipline like time outs are more effective than spanking. According to the Child Mind Institute’s website, time outs were introduced in the 1950s by a psychological behaviorist Arthur Staats as a way to discipline a child, instead of the widely used corporal punishment of the times (Martinelli). Time outs were also introduced to avoid shaming and verbal attacks by frustrated parents. Behaviorist Arthur Staats had the idea that children acting out was fueled by a need for attention.

Time outs were a way to withdraw the attention of the child by the parent, in turn stopping the bad behavior (Martinelli). Time outs can be used by parents to punish their kids without the use of physical force. There isn’t a need for spanking when other alternatives exist. Time outs also seem to give the parents time to cool off, rather than acting out on their frustration by hitting their child and then feeling guilty afterward. Not only do children benefit from the use of time outs, so do the parents.

There are some critics that argue that time outs are harmful to children because they are isolating, according to Katherine Martinelli’s article on the Child Mind Institute’s website (Martinelli). The Center for Educating Parent’s website also claims that critics argue that some children are extroverts, and time outs can be harmful to the child. These claims are not backed up by much, if any, research. Current research to this date agrees that time outs are an appropriate way of disciplining a child and can be used in place of spanking (Martinelli).

According to Martinelli, if a parent is still worried about time outs being ineffective, they can use a “time in” method, where the parent interacts with the child to help them calm down (Martinelli). Parents need to educate themselves so that they can see all of the options that they have to discipline their child effectively. Rather than letting that frustration and anger build, a time out can be used so that the parent can have some time to compose themselves.

Furthermore, the American Academy of Pediatrics highly recommends time outs as a discipline strategy, rather than spanking, which they have stated they are against time and time again (Caron 2018). The American Academy of Pediatrics is a huge organization that strives for the health and safety of all kids. This organization has taken into account all of the research that is available and decided that the information shows that spanking should be avoided. Pediatricians should take this information and inform parents who haven’t done their research. Parents who are well-informed may change the way that they decide to discipline their children.

Countless studies and research show a major correlation between physical punishment and negative effects like aggression, anxiety, and depression. The research that was presented doesn’t even begin to touch the surface on the amount of information out there that shows that physical punishment should not be used with children. As stated in the New York Times, very important organizations like the American Academy of Pediatrics encourage other methods than physical punishment when disciplining children (Caron 2018).

Parents need to be informed that spanking isn’t effective, like they may think it is. Especially if the parents were spanked as children, they need to be presented the research so that they stop the cycle of physical punishment. It is vital that parents start to take the approach of teaching their children good behaviors and using methods like time outs, rather than using physical means to punish the child for bad behaviors.

Another Form of Terrorism. (2019, Jun 21). Retrieved from https://papersowl.com/examples/another-form-of-terrorism/

Say no to Child Physical Punishment

Outcomes of Parents Spank their Children