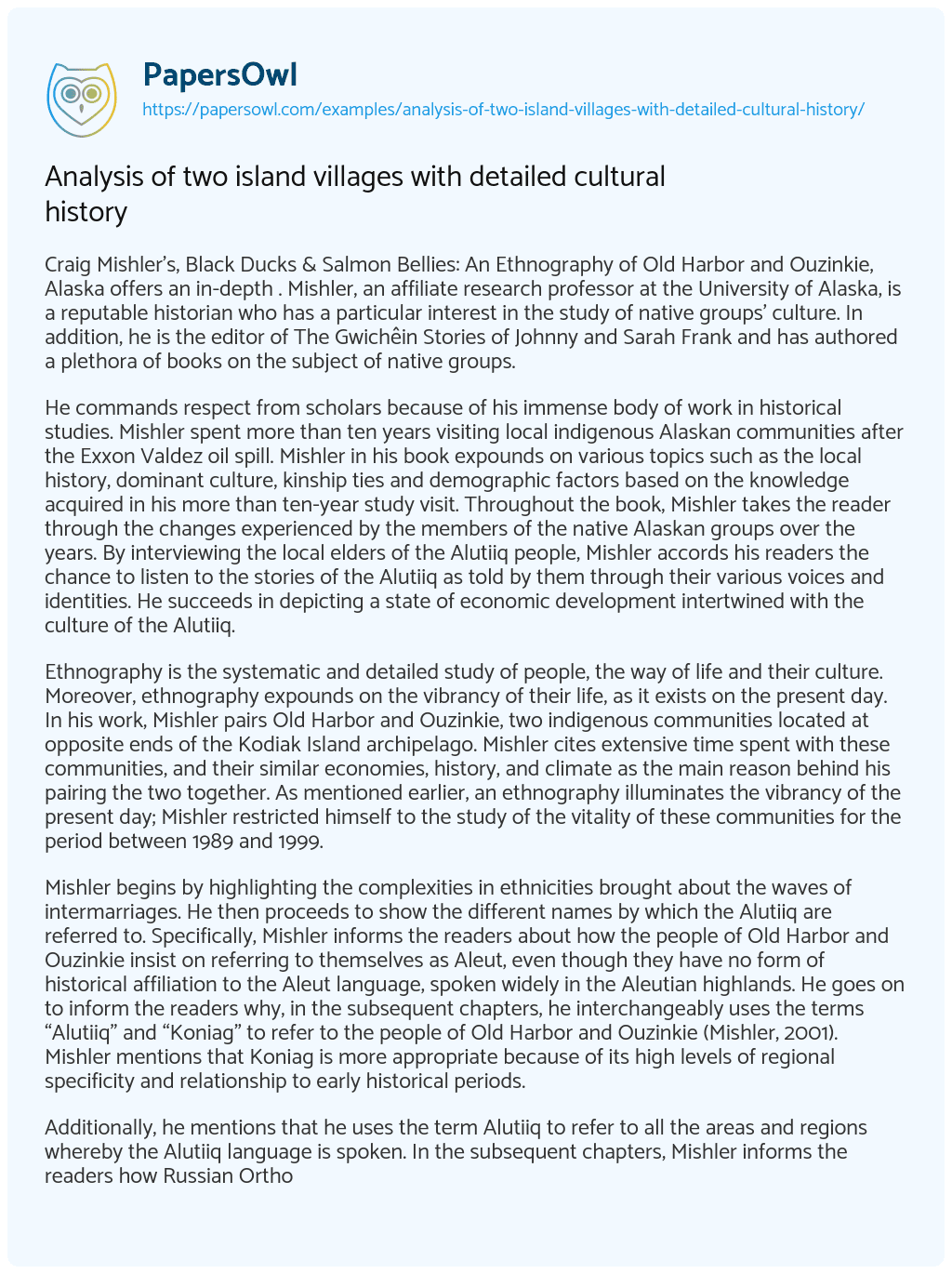 Craig Mishler’s, Black Ducks & Salmon Bellies: An Ethnography of Old Harbor and Ouzinkie, Alaska offers an in-depth . Mishler, an affiliate research professor at the University of Alaska, is a reputable historian who has a particular interest in the study of native groups’ culture. In addition, he is the editor of The Gwichêin Stories of Johnny and Sarah Frank and has authored a plethora of books on the subject of native groups.

He commands respect from scholars because of his immense body of work in historical studies. Mishler spent more than ten years visiting local indigenous Alaskan communities after the Exxon Valdez oil spill. Mishler in his book expounds on various topics such as the local history, dominant culture, kinship ties and demographic factors based on the knowledge acquired in his more than ten-year study visit. Throughout the book, Mishler takes the reader through the changes experienced by the members of the native Alaskan groups over the years. By interviewing the local elders of the Alutiiq people, Mishler accords his readers the chance to listen to the stories of the Alutiiq as told by them through their various voices and identities. He succeeds in depicting a state of economic development intertwined with the culture of the Alutiiq.

Ethnography is the systematic and detailed study of people, the way of life and their culture. Moreover, ethnography expounds on the vibrancy of their life, as it exists on the present day. In his work, Mishler pairs Old Harbor and Ouzinkie, two indigenous communities located at opposite ends of the Kodiak Island archipelago. Mishler cites extensive time spent with these communities, and their similar economies, history, and climate as the main reason behind his pairing the two together. As mentioned earlier, an ethnography illuminates the vibrancy of the present day; Mishler restricted himself to the study of the vitality of these communities for the period between 1989 and 1999.

Mishler begins by highlighting the complexities in ethnicities brought about the waves of intermarriages. He then proceeds to show the different names by which the Alutiiq are referred to. Specifically, Mishler informs the readers about how the people of Old Harbor and Ouzinkie insist on referring to themselves as Aleut, even though they have no form of historical affiliation to the Aleut language, spoken widely in the Aleutian highlands. He goes on to inform the readers why, in the subsequent chapters, he interchangeably uses the terms “Alutiiq” and “Koniag” to refer to the people of Old Harbor and Ouzinkie (Mishler, 2001). Mishler mentions that Koniag is more appropriate because of its high levels of regional specificity and relationship to early historical periods.

Additionally, he mentions that he uses the term Alutiiq to refer to all the areas and regions whereby the Alutiiq language is spoken. In the subsequent chapters, Mishler informs the readers how Russian Orthodox is the dominant religion of the Old Harbor and Ouzinkie people. However, he hardly makes any mention about the modern religious beliefs and practices of the Koniag people. Nonetheless, Mishler is quick to explain the omission by citing the extensive scholarly work on the area. The de facto method of collecting data and information that is employed by Mishler involves the systematic recording of experiences and events using field notes. Mishler also used oral interviews and photos as auxiliary methods of data collection.

The ethnography’s credibility is enhanced by the fact that unlike other ethnographies, Mishler allowed the local natives to tell their stories through interviews with the elders. Because of this, the readers get direct information about the Alutiiq people’s way of life from both the first person perspective and a second person narration perspective. It is evident this is essential, as it enhances the validity of the data and information gathered, and enables the readers to cross-check the validity of the reported data. In addition, by interviewing a diverse array of respondents such as Mary and Sven Haakanson Sr., George Inga Sr. and Rob Bernstein, among others, Mishler accords the reader the rare opportunity to learn about different reported versions of the culture of the Alutiiq people from both the migrants’ perspective and the aboriginal perspective.

Moreover, Mishler exemplifies the credibility of the ethnography through his ten year stay with the Alutiiq people. It is only through this considerably extended period of staying with the Alutiiq people that he can inform the reader comprehensively about the pertinent facets of their culture. Because of this, the ethnography serves its primary purpose of telling the reader about the vibrancy of the present day culture of the Alutiiq people. Additionally, Mishler’s vast experience as a subsistence resource specialist ensured he is partners well-suited to collect data through active participation and involvement in daily practices.

Analogy of the History of Merengue and the Island of Hispaniola

Cultural Diversity and the Back Born of the American History