An Argument about Racial Discrimination against Jackie Robinson 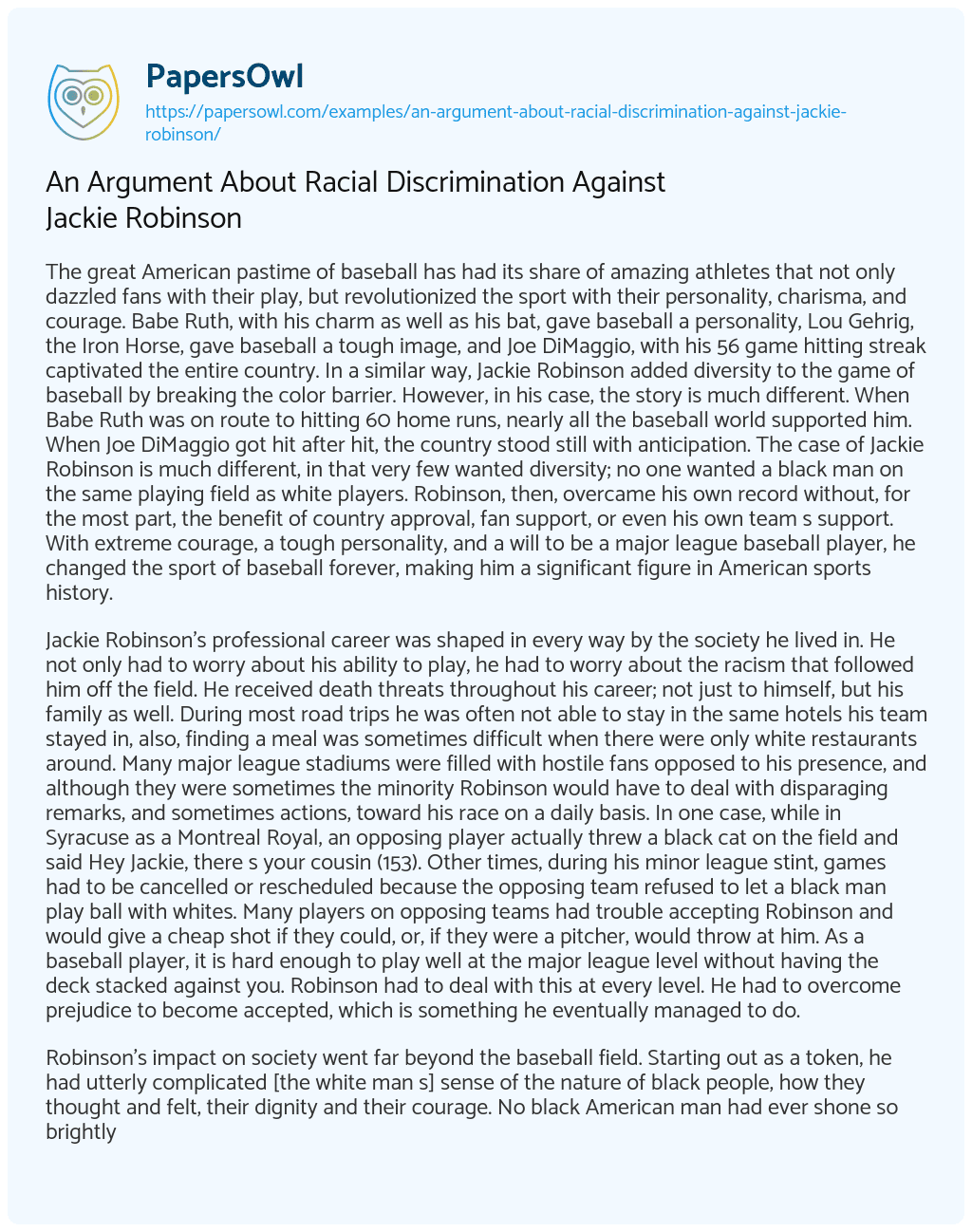 The great American pastime of baseball has had its share of amazing athletes that not only dazzled fans with their play, but revolutionized the sport with their personality, charisma, and courage. Babe Ruth, with his charm as well as his bat, gave baseball a personality, Lou Gehrig, the Iron Horse, gave baseball a tough image, and Joe DiMaggio, with his 56 game hitting streak captivated the entire country. In a similar way, Jackie Robinson added diversity to the game of baseball by breaking the color barrier. However, in his case, the story is much different. When Babe Ruth was on route to hitting 60 home runs, nearly all the baseball world supported him. When Joe DiMaggio got hit after hit, the country stood still with anticipation. The case of Jackie Robinson is much different, in that very few wanted diversity; no one wanted a black man on the same playing field as white players. Robinson, then, overcame his own record without, for the most part, the benefit of country approval, fan support, or even his own team s support. With extreme courage, a tough personality, and a will to be a major league baseball player, he changed the sport of baseball forever, making him a significant figure in American sports history.

Jackie Robinson’s professional career was shaped in every way by the society he lived in. He not only had to worry about his ability to play, he had to worry about the racism that followed him off the field. He received death threats throughout his career; not just to himself, but his family as well. During most road trips he was often not able to stay in the same hotels his team stayed in, also, finding a meal was sometimes difficult when there were only white restaurants around. Many major league stadiums were filled with hostile fans opposed to his presence, and although they were sometimes the minority Robinson would have to deal with disparaging remarks, and sometimes actions, toward his race on a daily basis. In one case, while in Syracuse as a Montreal Royal, an opposing player actually threw a black cat on the field and said Hey Jackie, there s your cousin (153). Other times, during his minor league stint, games had to be cancelled or rescheduled because the opposing team refused to let a black man play ball with whites. Many players on opposing teams had trouble accepting Robinson and would give a cheap shot if they could, or, if they were a pitcher, would throw at him. As a baseball player, it is hard enough to play well at the major league level without having the deck stacked against you. Robinson had to deal with this at every level. He had to overcome prejudice to become accepted, which is something he eventually managed to do.

Robinson’s impact on society went far beyond the baseball field. Starting out as a token, he had utterly complicated [the white man s] sense of the nature of black people, how they thought and felt, their dignity and their courage. No black American man had ever shone so brightly for so long as the epitome not only of stoic endurance but also of intelligence, bravery, physical power, and grit Neither blacks nor whites would be quit the same thereafter in America (186-87). Robinson, then, truly changed the ideal of a black man in America, and along with that, the direction of segregation.

The feats that Robinson accomplished in the face of adversity leads us to an easy explanation of the type of personality that accompanied him. He had extreme courage, for only a courageous person would endure, and even welcome, the career long challenges he was faced with. He had confidence in himself as a person and as an athlete. His “enormous faith” of his physical ability was the result of years of success on every level of competition. This confidence surely helped him throughout his life as an athlete. One needs confidence to succeed at any sporting event. One more thing that Rampersad seems to illustrate a great deal is Robinson’s determination, his greatest strength as a ball player. Robinson was always determined to succeed, and would certainly never back down from any challenge presented to him.

There were literally hundreds of highlights throughout the brilliant career of Jackie Robinson. In 1949 he captured the batting title with a .342 average, leading the league with 37 stolen bases, and earned the Most Valuable Player award. Throughout his 10-year career he stole home plate 19 times, and in 1955, his steal of home plate in the first game of the World Series was said to have provided the Dodgers with the spark to capture their only championship over the Bronx Bombers. Robinson was also part of six national league pennants and on six all star teams. However, in my opinion, his best accomplishment came 5 years after he retired in 1962. This was when Jackie Robinson made the Hall of Fame in his first available year. He was the first baseball player to accomplish this task since the Hall of Fame had been created. Ironically, he joined with Bob Feller, a man who had been animate and vocal about the lack of major league talent on the part of Jackie Robinson during his first few years. Robinson held no grudges.

Robinson’s career had a profound impact on the history of baseball. Once Robinson succeeded in breaking the ice many black players followed in his footsteps. This was, of course, a gradual process, and by the end of Robinson ‘s career all but three major league teams had a black athlete in their organization at some level. Years later the Negro League would be disbanded as a result of lack of attendance. At this point, if one wanted to see the best black players, they didn t have to look further than the major leagues. This was all made possible by Robinson’s efforts, and therefore, his attempt at integration was successful.

The Biography of Jackie Robinson by Arnold Rampersad does more than explain the life and the legend. By showing us Robinson’s inner personality, his toughness and grit, Rampersad tries to get the point across that although many others, given different circumstances, may have been able to break baseball s color line, few would have been able to match Jackie s relentless determination to shine in spite of the adversity and hatred he faced. Few would have been able to avoid having their will broken by the numerous hurdles Robinson overcame. This is what I believe the thesis to be, and what Rampersad wanted readers to take with them. I know that s what I will remember years from now when I forget individual facts and details. That, and the fact that Robinson was somehow able to steal home 19 times in his career. I have watched baseball since 1984 and have never seen anyone come close. It takes a very gifted athlete to accomplish such a task.

This book certainly had good features to it. It was a fairly easy book to read, very smooth and not confusing. There was thorough research via interviews with people who knew Jackie Robinson and especially his wife Rachel. He backed up every point he made in great detail. And upon completing this book I now feel like a Jackie Robinson expert. One thing I would have liked to hear more about is the Hall of Fame ceremony. There are only three pages dedicated to the event, and even at that they aren’t full pages. I would think a major event like this one would merit a little more detail, and maybe even a touch of sentimental rhetoric. The Hall of Fame is, after all, the highest honor that a baseball played can be paid.

Along the topic of early black baseball players, my favorite would have to be Willie Mays. Arguably the best all-around ball player ever, he redefined the limits of what playing the field is all about. His career was filled with amazing catches that would even win over opposing crowds. Hitting 660 home runs during his career was no small achievement either. He looked up to Robinson, and became friendly with him. As a New York Giant he played in games against Robinson all the time. When he broke into the league he faced some similar challenges though not as tough. I guess it helped Mays that Robinson not only broke the color barrier in baseball, but the New York color barrier in baseball as well. If people weren’t convinced blacks would be able to succeed in baseball after Jackie Robinson, they surely wouldn’t be able to put up a valid argument after Willie Mays.

An Argument About Racial Discrimination Against Jackie Robinson. (2022, Nov 23). Retrieved from https://papersowl.com/examples/an-argument-about-racial-discrimination-against-jackie-robinson/