An Afterlife of the Ancient Egyptians 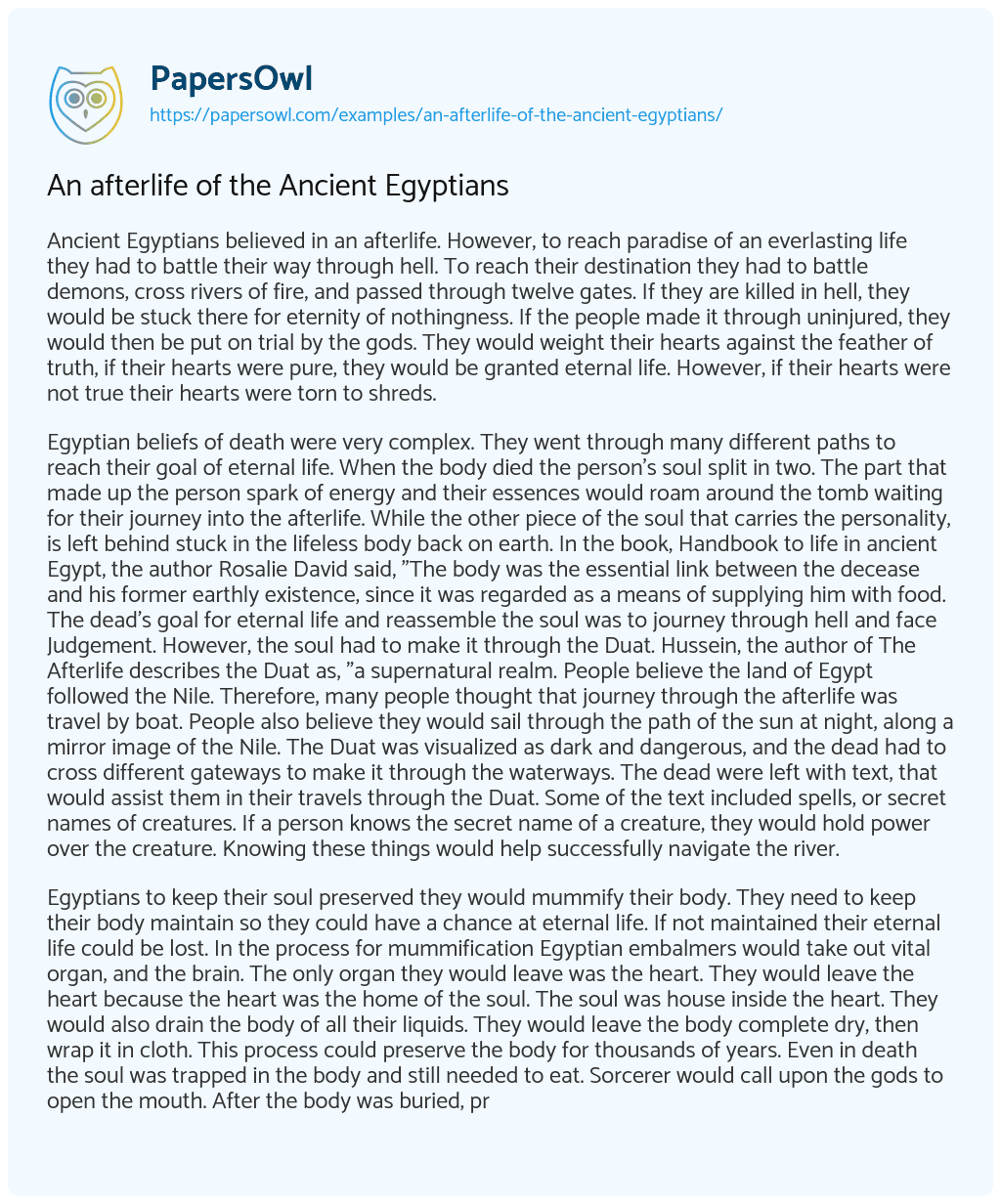 Egyptian beliefs of death were very complex. They went through many different paths to reach their goal of eternal life. When the body died the person’s soul split in two. The part that made up the person spark of energy and their essences would roam around the tomb waiting for their journey into the afterlife. While the other piece of the soul that carries the personality, is left behind stuck in the lifeless body back on earth. In the book, Handbook to life in ancient Egypt, the author Rosalie David said, “The body was the essential link between the decease and his former earthly existence, since it was regarded as a means of supplying him with food. The dead’s goal for eternal life and reassemble the soul was to journey through hell and face Judgement. However, the soul had to make it through the Duat. Hussein, the author of The Afterlife describes the Duat as, “a supernatural realm. People believe the land of Egypt followed the Nile. Therefore, many people thought that journey through the afterlife was travel by boat. People also believe they would sail through the path of the sun at night, along a mirror image of the Nile. The Duat was visualized as dark and dangerous, and the dead had to cross different gateways to make it through the waterways. The dead were left with text, that would assist them in their travels through the Duat. Some of the text included spells, or secret names of creatures. If a person knows the secret name of a creature, they would hold power over the creature. Knowing these things would help successfully navigate the river.

Egyptians to keep their soul preserved they would mummify their body. They need to keep their body maintain so they could have a chance at eternal life. If not maintained their eternal life could be lost. In the process for mummification Egyptian embalmers would take out vital organ, and the brain. The only organ they would leave was the heart. They would leave the heart because the heart was the home of the soul. The soul was house inside the heart. They would also drain the body of all their liquids. They would leave the body complete dry, then wrap it in cloth. This process could preserve the body for thousands of years. Even in death the soul was trapped in the body and still needed to eat. Sorcerer would call upon the gods to open the mouth. After the body was buried, priest would perform long and complicated rituals, that would pull up statues made in the image of the dead, pleading with the gods to let them eat. They would also leave sacrifices animal at its foot, so the soul could feed. The rituals gave the dead a chance at eternal life. However, these procedurals were very expensive. Pharoahs and the wealth could get tombs and embalmers to help them earn their second chance at life. Unfortunately, there was no protection offered to the poor. The only option was for the people to take their dead out to the desert and bury them in shallow graves in hopes of the dry air would dehydrate their bodies long enough, so they could reach their heaven. In the book, Handbook to life in ancient Egypt, the author Rosalie David expresses the importance’s of keep the body maintained, “The body was the essential link between the decease and his former earthly existence, since it was regarded as a means of supplying him with food. David expressed the importance of the body. The body contains part of the soul. David also said that Egyptians would put small figurines in the tombs, just in case their body was damaged.

While one part of the soul stays with the body, the other part would make the journey through the Netherworld. The Egyptians believe there was a great river in the sky that not even a god could past. There was only one person who could pass, and it was the ferryman of gods. A creature with eyes on the back of its head. Sometime the ferryman would not help, so people would threaten him into helping. The ferry would take people through the Duat. The Duat is a land full of Gods, Demons, and monster. Many of these creatures were out to kill the souls that tried to pass. Many of the creatures wanted to prey on the souls, so the souls were buried with spells and amulets to keep them in the Netherworld. To get through the Duat, people would have to pass through twelve gates that were lined with sharp spears and guarded by snakes who breathed venom and fire. The only way to pass was to stay the name of the guardian. Many kings were buried with their names, some kings were even buried with a map of hell. If souls could make it through all twelev gates, the sould would arrive in the kingdom of orisis

An afterlife of the Ancient Egyptians. (2020, Jan 09). Retrieved from https://papersowl.com/examples/an-afterlife-of-the-ancient-egyptians/

The Beliefs of the Ancient Egyptians

The Influence of the Ancient Egyptians

About an Ancient Egypt