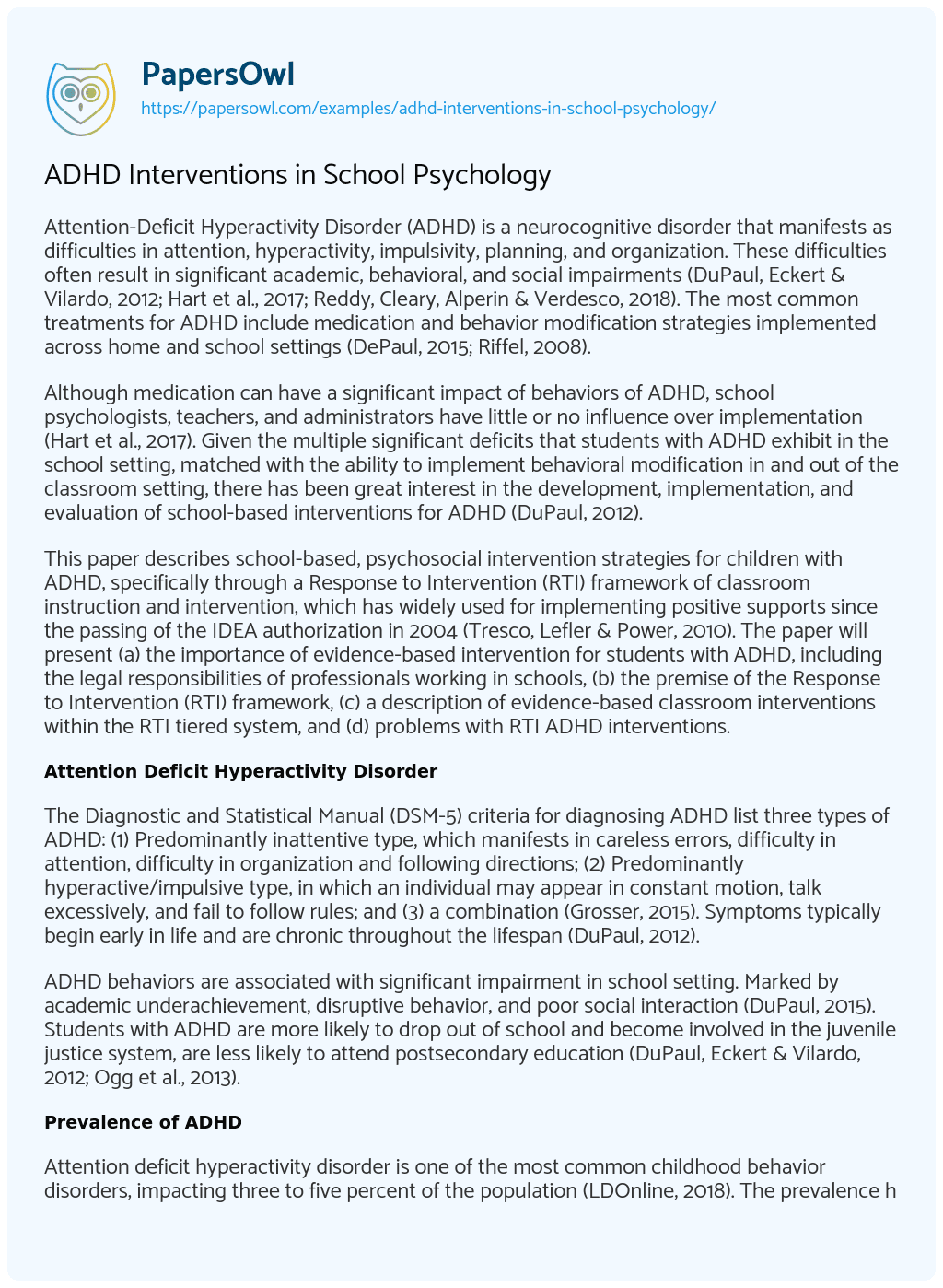 Although medication can have a significant impact of behaviors of ADHD, school psychologists, teachers, and administrators have little or no influence over implementation (Hart et al., 2017). Given the multiple significant deficits that students with ADHD exhibit in the school setting, matched with the ability to implement behavioral modification in and out of the classroom setting, there has been great interest in the development, implementation, and evaluation of school-based interventions for ADHD (DuPaul, 2012).

This paper describes school-based, psychosocial intervention strategies for children with ADHD, specifically through a Response to Intervention (RTI) framework of classroom instruction and intervention, which has widely used for implementing positive supports since the passing of the IDEA authorization in 2004 (Tresco, Lefler & Power, 2010). The paper will present (a) the importance of evidence-based intervention for students with ADHD, including the legal responsibilities of professionals working in schools, (b) the premise of the Response to Intervention (RTI) framework, (c) a description of evidence-based classroom interventions within the RTI tiered system, and (d) problems with RTI ADHD interventions.

The Diagnostic and Statistical Manual (DSM-5) criteria for diagnosing ADHD list three types of ADHD: (1) Predominantly inattentive type, which manifests in careless errors, difficulty in attention, difficulty in organization and following directions; (2) Predominantly hyperactive/impulsive type, in which an individual may appear in constant motion, talk excessively, and fail to follow rules; and (3) a combination (Grosser, 2015). Symptoms typically begin early in life and are chronic throughout the lifespan (DuPaul, 2012).

Attention deficit hyperactivity disorder is one of the most common childhood behavior disorders, impacting three to five percent of the population (LDOnline, 2018). The prevalence has increased substantially, with a CDC report indicating that two million more children had been diagnosed in 2011 than in 2003 (Reddy et al., 2018). Data from a nationally representative sample of elementary school students in special education has indicated that twenty-seven percent of students in special education are children with ADHD (Ogg et al., 2013).

Students with ADHD are more likely to have co-existing emotional, behavioral, developmental, and learning problems. (Grosser, 2015). Around 12% of children with ADHD and without learning disability receive special education, whereas students with both ADHD and a comorbid learning disability, almost 65% receive special education (Ogg et al., 2013). Many researchers report finding comorbidity 20-50% of the time with reading disabilities and up to 30% in math disabilities (Riffel, 2008).

Responsibility to Students with ADHD

Increased involvement in assessment and intervention for problems like ADHD is also a legal responsibility. Two federal laws, the Individuals with Disabilities Education Act (IDEA, P.L. 94-142) and Section 504 of the Rehabilitation Act of 1973 (Section 504), are relevant when addressing the needs of children with ADHD (Tresco, Lefler & Power, 2010). These children may qualify for services under Section 504, which is a civil rights act that provides for reasonable accommodations to enable individuals with disabilities equal access to programs and opportunities (Tresco, Lefler & Power, 2010). However, many children with ADHD as a single diagnosis do not demonstrate a sufficient level of impairment to meet criteria under IDEA.

Accommodations under Section 504 are typically provided in general education and are often less intensive than those provided under IDEA (Tresco, Lefler & Power, 2010). However, the recent reauthorization of IDEA, with its requirements for functional assessments, has increased the frequency with which classroom-based behavioral interventions are considered for all students (LDOnline, 2018). These two pieces of legislation have increased awareness of learning disabilities and behavior disorders that interfere with academic functioning, and have led to increased attention on individual, classroom, and school-wide intervention (LDOnline, 2018; Tresco, Lefler & Power, 2010). Emphasis within school-wide prevention and intervention frameworks have focused on the role of general education teachers in classroom behavior management (Hart et al., 2017). The most common such framework, which has grown significantly since the reauthorization of IDEA in 2004, has been Response to Intervention.

With the support and encouragement of the 2004 authorization of IDEA, many schools are now implementing a Response to Intervention (RIT) framework (U.S. National Library of Medicine, 2018). Students who are making limited academic and behavioral progress are assigned specific interventions designed to improve their rate of learning or behavior, which are generally implemented by the general education teacher. The supports are organized in three tiers–universal (Tier 1), targeted (Tier 2), and intensive interventions (Tier 3) (Hart et al., 2017).

The culture of a classroom can either support or create barriers to student success, and factors that foster attention, positive behavior, and academic and social success are of the utmost importance (Piffner, 2011). Tier 1 interventions are those that are implemented for all students in the classroom and are generally preventative and proactive in nature (Hart et al., 2017). When using this proactive approach, teachers support all students and create conditions that prepare them for learning (Grosser, 2015).

Classroom Management Techniques. Tier 1 classroom intervention for ADHD start with how the classroom environment is set up. This environmental setup might include seating arrangement to avoid distractibility and assigning time for interactive group work in which the students can be out of their seats. Frequent praise of positive behavior is another classroom management technique that leads to positive outcomes for many students, and students with ADHD in particular.

Positive Reinforcement. Use of both negative and positive consequences are essential when working with youth but are particularly important when working with students with ADHD (Ogg et al., 2013). It is important to give all students praise and encourage them with outside reinforcers such as a token economy system, which has been proven to help manage symptoms of ADHD (LDOnline, 2018). These systems typically involve giving students tokens when they display appropriate behavior and allowing them to exchange the tokens for tangible rewards of privileges (LDOnline, 2018).

Classroom Environment modification. While universal classroom modification can be a proactive method of improving behavior for most students in the classroom, for students with ADHD who are not responding to those, more specific classroom modification may be necessary. These might include preferential seating, providing guidance prior to independent work, and increased frequency of task-related recognition (Hart et al., 2017; Tresco, Lefler & Power, 2010). It may also require increased frequency of positive reinforcement and the use of tangible rewards. Seating arrangement is a particularly frequent second tier adjustment in which the teacher attempts to seat the student away from distractions, close to the teaching action, and near less distracting and more attentive peers (Grosser, 2015).

Response-Cost Programs. These programs are a method of more targeted negative reinforcement administration. While Tier 1 supports include the use of both positive and negative reinforcement of all students in a classroom, response cost programs are more targeted to students who have not responded well to token economy programs, and continue to exhibit disruptive, hyperactive, and inattentive behaviors (LD Online, 2018). In these programs, a student may lose earned points or privileges when previously specified rules are broken. There is evidence that response-cost programs significantly decrease ADHD symptoms such as impulsivity (LD Online, 2018).

Consequence-Based Intervention. An important intervention for addressing disruptive and problematic behavior in individual students who have not been receptive to universal interventions is by changing the antecedents and consequences of behaviors, followed by regular assessment, monitoring and modification (Hart et al., 2017). Consequences are anything that follows a behavior and has the effect on the probability that the behavior will continue (Piffner, 2011). The goal is to reinforce the positive behaviors and extinguish the negative behaviors. This can be done using intrinsic and extrinsic reinforcement and punishment, specific to the students’ behaviors and interests.

Home-School Communication. One of the most effective Tier 2 strategies for students with ADHD is the use of a daily report card, which will identify, monitor, and change problem behavior, while keeping the teacher and parents in regular communication about strengths and weaknesses (DuPaul, 2015; Hart et al., 2017). Ongoing communication with the child’s teacher allows parents to become familiar with the classroom expectations and allows them to follow up at home (Grosser, 2015).

Peers-Mediated Approaches. Peer-mediated approaches are particularly effective for students with ADHD because they increase students’ opportunities for engagement and active learning (Piffner, 2011). In creating peer mediated activities, students with and without difficulties and impulsivity should be considered for peer partnerships and peer tutoring (Grossner, 2015). Peer tutoring facilitates the acquisition of both academic and social skills within carefully structured cooperative learning groups with assigned roles and clear expectations for desired outcomes (Piffner, 2011). These groups tend to provide consistency, a level of goal setting, and immediate feedback (LD Online, 2018).

Tier 3 intensive interventions are generally individualized, typically requiring greater resources and of longer duration, typically implemented following repeated nonresponse to both universal and targeted strategies (Hart et al., 2017). Students who reach this level of intervention typically have an Individualized Education Plan (IEP) under the 2004 IDEA authorization that may include intensive supports in the general education setting or may require a change in classroom placement (Hart et al., 2017; Tresco, Lifler & Power, 2010).

Limitations to Classroom-Based Interventions for ADHD

Classroom interventions, through an RTI framework, address the core symptoms of ADHD. These strategies do so by benefitting many students in individual classrooms and school wide. However, these interventions are not without their limitations, particularly when it comes to the fidelity and realistic utility of the RTI tiered intervention. Constant behavior management strategies may seem unrealistic for some teachers. In other cases, teachers may perceive a high level of behavior management in their classrooms but may not be implementing them as such.

In one survey of teachers from 26 states across the US, it was found that middle and high school teachers perceived that they had tried and succeeded more than preschool and elementary teachers in child involvement (i.e., actively involving the child motorically, verbally, and cognitively in their assignments) and classroom structure accommodation (e.g., allowing child movement in the classroom and providing different seating arrangements) (Hart et al., 2017). However, it has been consistently shown that grade level does impact fidelity of such interventions, but in the opposite way. In a metanalysis on fidelity of ADHD behavioral supports, researchers found a decreasing trend in the use of praise and other universal supports, as well as targeted supports, as grade level increases (Hart et al., 2017).

Guided by education legislation, the Response to Intervention (RTI) framework has become a focus for schools nationwide when it comes to promoting positive behaviors and proactively addressing negative behaviors. Given the expected outcomes and high prevalence of ADHD in children and adolescents, it is no surprise that the RTI tiered systems has been used to be both proactive and responsive in addressing the core ADHD symptoms of inattention and hyperactivity. While varying in level of specificity, there are common interventions that have been found most effective for ADHD. These interventions include classroom management techniques, praise, positive and negative reinforcement, and the involvement of both peers and parents for consistency across environments and for immediate feedback.