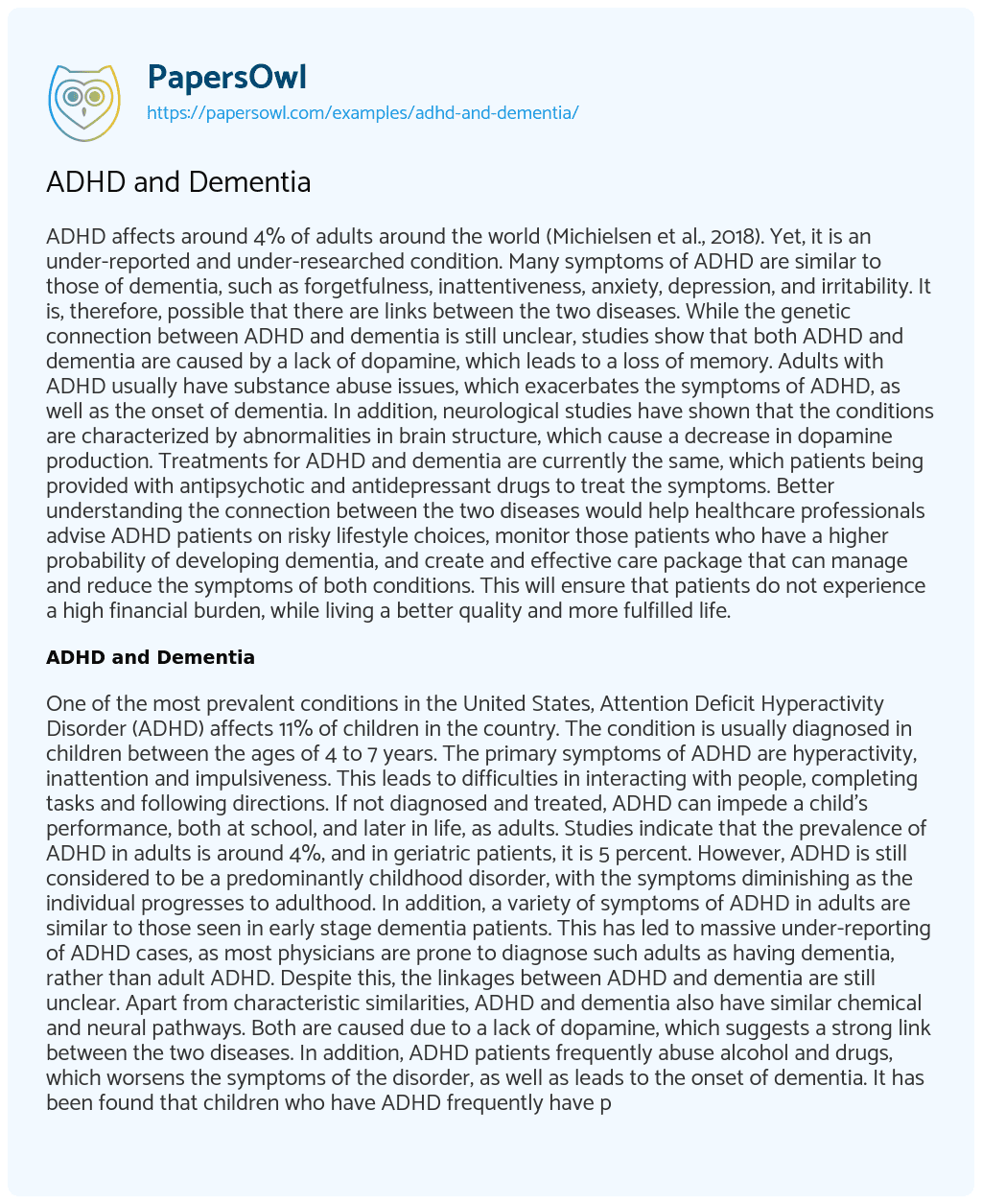 ADHD affects around 4% of adults around the world (Michielsen et al., 2018). Yet, it is an under-reported and under-researched condition. Many symptoms of ADHD are similar to those of dementia, such as forgetfulness, inattentiveness, anxiety, depression, and irritability. It is, therefore, possible that there are links between the two diseases. While the genetic connection between ADHD and dementia is still unclear, studies show that both ADHD and dementia are caused by a lack of dopamine, which leads to a loss of memory. Adults with ADHD usually have substance abuse issues, which exacerbates the symptoms of ADHD, as well as the onset of dementia. In addition, neurological studies have shown that the conditions are characterized by abnormalities in brain structure, which cause a decrease in dopamine production. Treatments for ADHD and dementia are currently the same, which patients being provided with antipsychotic and antidepressant drugs to treat the symptoms. Better understanding the connection between the two diseases would help healthcare professionals advise ADHD patients on risky lifestyle choices, monitor those patients who have a higher probability of developing dementia, and create and effective care package that can manage and reduce the symptoms of both conditions. This will ensure that patients do not experience a high financial burden, while living a better quality and more fulfilled life.

One of the most prevalent conditions in the United States, Attention Deficit Hyperactivity Disorder (ADHD) affects 11% of children in the country. The condition is usually diagnosed in children between the ages of 4 to 7 years. The primary symptoms of ADHD are hyperactivity, inattention and impulsiveness. This leads to difficulties in interacting with people, completing tasks and following directions. If not diagnosed and treated, ADHD can impede a child’s performance, both at school, and later in life, as adults. Studies indicate that the prevalence of ADHD in adults is around 4%, and in geriatric patients, it is 5 percent. However, ADHD is still considered to be a predominantly childhood disorder, with the symptoms diminishing as the individual progresses to adulthood. In addition, a variety of symptoms of ADHD in adults are similar to those seen in early stage dementia patients. This has led to massive under-reporting of ADHD cases, as most physicians are prone to diagnose such adults as having dementia, rather than adult ADHD. Despite this, the linkages between ADHD and dementia are still unclear. Apart from characteristic similarities, ADHD and dementia also have similar chemical and neural pathways. Both are caused due to a lack of dopamine, which suggests a strong link between the two diseases. In addition, ADHD patients frequently abuse alcohol and drugs, which worsens the symptoms of the disorder, as well as leads to the onset of dementia. It has been found that children who have ADHD frequently have parents suffering from the condition as well. Mothers who are excessive smokers can give birth to hyperactive children. The probability of these children abusing drugs and alcohol is high, leading to a higher likelihood of developing Mild Cognitive Impairment (MCI) and dementia. Finally, chemical imbalances, such as a lack of ferritine, can cause decrease in dopamine in children with ADHD. This deficiency, if continued into adulthood, could speed the development of dementia in such individuals. By understanding the similarities and pathways that connect these two disorders, physicians will be able to better diagnose patients, understand the risk factors that speed up the onset of cognitive impairment, and monitor those ADHD patients that are at high risk for developing dementia. This can ensure a better quality and more effective healthcare process for the diagnosis and treatment of ADHD patients, leading to a lower financial and physical burden on the patients.

While unruly and hyperactive children have been a common occurrence in literary texts since ages, their mention in medical literature has only begun since the end of the 18th century. At that point, it was hypothesized that this restlessness could be due to external factors that cause brain dysfunction. German physician Melchior Weikard, and Scottish physician Alexander Crichton both described this early onset, attention disorder, and highlighted its impact on the learning abilities of those affected by it. Weikard was also the first to identify adult patients suffering from ADHD. However, it was only in 1902, that George Still proposed that genetic factors could be contributing to the development of this disorder. For the next few decades, the reason given for the onset of ADHD in children was “minimal brain damage; this was changed to “minimal brain dysfunction in 1962, to emphasize the fact that there are no structural damages to the organ because of this condition.

For the longest time, only children were the focus of ADHD diagnoses; this was seen right up till the DSM-IV, which maintained that children outgrow the symptoms of ADHD by adulthood, and only a small minority of adults carry over the condition. However, research since has shown that this condition is common in adults as well, more so in the parents of children affected by ADHD. Critics have argued that the diagnosis and treatment of ADHD in adults is simply a way to restrict behavior to certain societal norms, and that this taming of mannerism is to obtain as much profit as possible from the sale of psychostimulant drugs. Studies have shown that in recent years, there has been an over-diagnosis of ADHD, as well as an increase in the use of psychostimulants (Gaidamowicz et al., 2018). In addition, it has been argued that diagnosis of ADHD in adults is imperfect, due to a flawed criteria for diagnosis, and the high level of comorbidity of ADHD with other mental illnesses (Gaidamowicz et al., 2018).

There are an estimated 35.6 million people worldwide, who have been diagnosed with dementia. This number is believed to be increasing by 7.7 million every year. The most common symptoms include memory loss, inability to concentrate, and loss of spacio-temporal skills. People with dementia also often experience irritability, anxiety, depression and mood swings. Dementia is usually caused by Alzheimer’s disease, which leads to abnormal protein coatings over brain cells. Vascular dementia occurs due to the narrowing of blood vessels, causing reduced blood and oxygen flow to the brain cells. Dementia with Lewy Bodies occurs when abnormal structures, called lewy bodies, are formed inside the brain cells. This leads to changes in the chemical composition of the brain, causing the death of the brain cells. Frontotemporal dementia occurs due to damage to the front of the brain. Mild Cognitive Impairment (MCI) is a condition where an individual experiences periods of forgetfulness, but it is not severe enough to be diagnosed as brain damage. People with MCI are at a higher risk of developing dementia.

The symptoms of forgetfulness, difficulty in engaging and maintaining attention and reduced speed of thought processing are considered to be the core features of ADHD in adults. However, these symptoms are not unique to the disorder, and are also seen in early stages of dementia, including vascular dementia (Vasquez and Zakzanis, 2015), dementia with Lewy bodies (Donaghy and Mckeith, 2014) and frontotemporal dementia (Schubert et al., 2016). At an early stage, these disorders are known as Mild Cognitive Impairment (MCI). Both ADHD and MCI patients suffer from sleep disturbances and depression. Due to this overlap in symptoms, it is very difficult to identify which disorder is the root cause, leading to many adults being misdiagnosed (Callahan et al., 2017). Golimstock et al. (2010) propose that because childhood ADHD and adult dementia with Lewy bodies occur due to a decrease in dopamine production, the former could be a precursor to the latter. The study found that 47.8% of patients with ADHD, that participated in the study, also had dementia with Lewy Bodies. Other studies have found a positive association between ADHD and the progress of the diseased, prodromal state of MCI (Ivanchak, Fletcher & Jicha, 2010). Tzeng et al. (2017) found that ADHD patients had a 3.4 times higher probability of developing dementia, compared to the non-ADHD, age- and gender-matched control group.

Genetic Commonalities Between ADHD and Dementia

Studies conducted on ADHD in twins, family units and in adopted children, indicate that there is a genetic basis to this disorder. Having the specific genetic mutation associated with ADHD increases the probability of developing this condition, particularly so in the D4 and D5 dopaminargic receptor genes, the SNAP-25 (synaptic protein), and HTR1B (serotonin receptor) gene (Ivanchak, Fletcher & Jicha, 2010). The connection between SNAP-25 and ADHD could also indicate a common neural pathway for ADHD and dementia (Ivanchak, Fletcher & Jicha, 2010).

ADHD and Dementia. (2020, May 12). Retrieved from https://papersowl.com/examples/adhd-and-dementia/

Alzheimer’s is a Form of Dementia