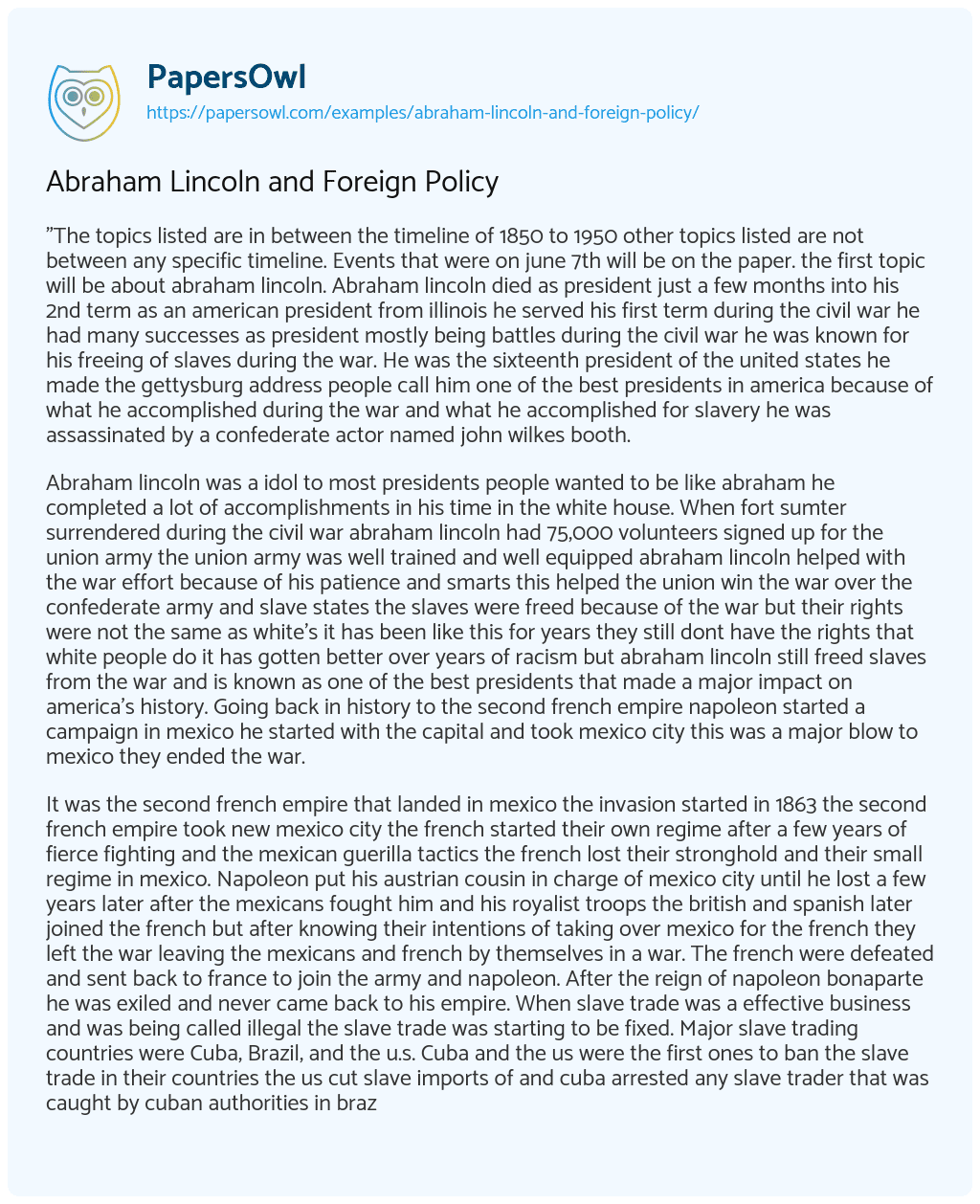 “The topics listed are in between the timeline of 1850 to 1950 other topics listed are not between any specific timeline. Events that were on june 7th will be on the paper. the first topic will be about abraham lincoln. Abraham lincoln died as president just a few months into his 2nd term as an american president from illinois he served his first term during the civil war he had many successes as president mostly being battles during the civil war he was known for his freeing of slaves during the war. He was the sixteenth president of the united states he made the gettysburg address people call him one of the best presidents in america because of what he accomplished during the war and what he accomplished for slavery he was assassinated by a confederate actor named john wilkes booth.

Abraham lincoln was a idol to most presidents people wanted to be like abraham he completed a lot of accomplishments in his time in the white house. When fort sumter surrendered during the civil war abraham lincoln had 75,000 volunteers signed up for the union army the union army was well trained and well equipped abraham lincoln helped with the war effort because of his patience and smarts this helped the union win the war over the confederate army and slave states the slaves were freed because of the war but their rights were not the same as white’s it has been like this for years they still dont have the rights that white people do it has gotten better over years of racism but abraham lincoln still freed slaves from the war and is known as one of the best presidents that made a major impact on america’s history. Going back in history to the second french empire napoleon started a campaign in mexico he started with the capital and took mexico city this was a major blow to mexico they ended the war.

It was the second french empire that landed in mexico the invasion started in 1863 the second french empire took new mexico city the french started their own regime after a few years of fierce fighting and the mexican guerilla tactics the french lost their stronghold and their small regime in mexico. Napoleon put his austrian cousin in charge of mexico city until he lost a few years later after the mexicans fought him and his royalist troops the british and spanish later joined the french but after knowing their intentions of taking over mexico for the french they left the war leaving the mexicans and french by themselves in a war. The french were defeated and sent back to france to join the army and napoleon. After the reign of napoleon bonaparte he was exiled and never came back to his empire. When slave trade was a effective business and was being called illegal the slave trade was starting to be fixed. Major slave trading countries were Cuba, Brazil, and the u.s. Cuba and the us were the first ones to ban the slave trade in their countries the us cut slave imports of and cuba arrested any slave trader that was caught by cuban authorities in brazil the trading didn’t stop for a while later on slave trading became a law and was not allowed but people still smuggled in slaves to trade slave trading is now illegal but drug trafficking and sex slaves still exist today and it is still a serious matter that everyone is trying to fix it will be a while before it is fixed. Slave trading started drug trafficking because of the type of trading or smuggling this started the cartels and the mafia.

There is a important mobster in the mafia that was named Charles “lucky” luciano. Charles was born in a sicilian town called lercara friddi he grew up in the sulfur mining town till he was 10 when he immigrated to new york with his family. That’s when he started to get arrested. He joined the mafia to become a crime lord he was the leader of the five points gang. Then the murders of families from mobsters made him move up the ranks to become the second hand man he had his men go and kill the boss. He then became the boss and he got his money from prostitution, drug running, and and murdering other gang bosses. He was eventually caught and charged on 62 counts of prostitution and counts of murder. He was sentenced to 40 to 50 years in prison. Charles lucky luciano was the boss of all organized crime in new york when he was deported from italy along with his family he grew up in new york after his deportation he quickly became the right hand man of his boss he hired his mafia members and killed him he later became the boss of the five points gang he acquired money through illegal drugs to prostitution he made money of other things as well he has murdered to get money before he was a crime lord in new york he was kidnapped and stabbed he had his throat cut open by the opposing gang and left for dead in a alley he later got the nickname “lucky luciano” he changed his name to luciano it wasn’t his birth name.

Near the time of mafia and new york thugs there was somebody named Mohandas Karamchand Gandhi he was a civil rights spokesman he spoke out about ill treatment of races. Gandhi’s act of civil disobedience was in pietermaritzburg in africa he was kicked of the train ghandi is a indian lawyer gandhi got his education in india and england he now is settling in africa to fight for his rights he started campaigns of indian rights movements he was arrested several times because of the british he was still released because of his anti violence acts he was called the mahatma he was killed by a muslim that did not approve of his look on muslim people he was noticed by other civil rights people such as martin luther king jr. he was very important because he noticed what gandhi did. Going back around the 1400’s there was a very important treaty that changed the history of spain and portugal and south america. The treaty of tordesillas was on june 7th, 1494 between portugal and spain. During the negotiation the king at the time was john 2 of portugal. The treaty was over the insufficiency of land in the new world the spanish got the majority of the land in the new world, portugal wanted a bigger part in the exploration but didn’t get much in return. The treaty helped the portuguese to gain land in the new world like the coast of brazil and other pieces of land the brazilian coast was founded by Pedro Alvares Cabral which led to the portuguese wanting more land in the new world.

Abraham Lincoln as the Great Emancipator

Abraham Lincoln the Greatest Leaders of our Nation