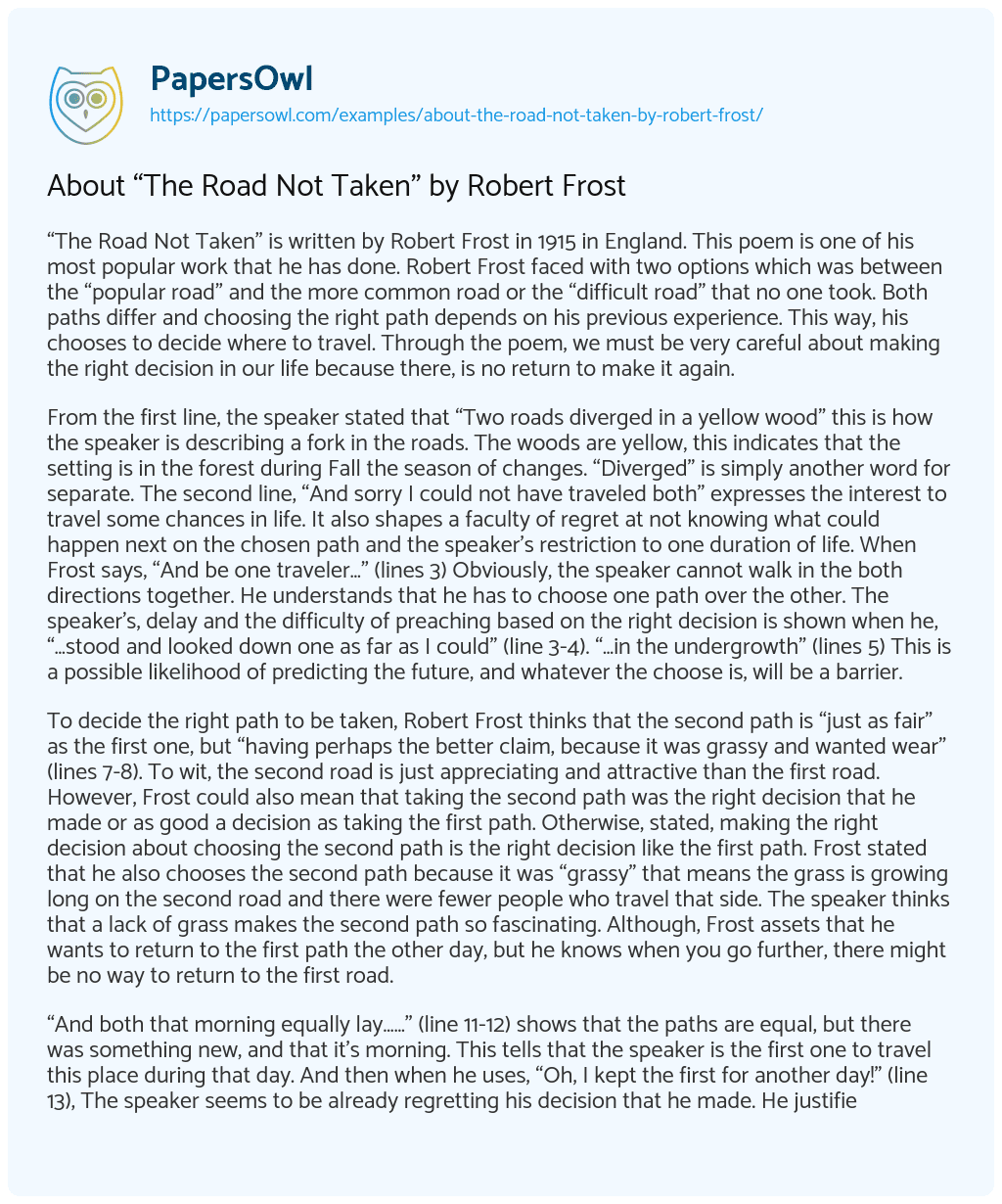 “The Road Not Taken” is written by Robert Frost in 1915 in England. This poem is one of his most popular work that he has done. Robert Frost faced with two options which was between the “popular road” and the more common road or the “difficult road” that no one took. Both paths differ and choosing the right path depends on his previous experience. This way, his chooses to decide where to travel. Through the poem, we must be very careful about making the right decision in our life because there, is no return to make it again.

From the first line, the speaker stated that “Two roads diverged in a yellow wood” this is how the speaker is describing a fork in the roads. The woods are yellow, this indicates that the setting is in the forest during Fall the season of changes. “Diverged” is simply another word for separate. The second line, “And sorry I could not have traveled both” expresses the interest to travel some chances in life. It also shapes a faculty of regret at not knowing what could happen next on the chosen path and the speaker’s restriction to one duration of life. When Frost says, “And be one traveler…” (lines 3) Obviously, the speaker cannot walk in the both directions together. He understands that he has to choose one path over the other. The speaker’s, delay and the difficulty of preaching based on the right decision is shown when he, “…stood and looked down one as far as I could” (line 3-4). “…in the undergrowth” (lines 5) This is a possible likelihood of predicting the future, and whatever the choose is, will be a barrier.

“And both that morning equally lay……” (line 11-12) shows that the paths are equal, but there was something new, and that it’s morning. This tells that the speaker is the first one to travel this place during that day. And then when he uses, “Oh, I kept the first for another day!” (line 13), The speaker seems to be already regretting his decision that he made. He justifies his choice of path by saying that he will return to the path later. At the beginning of the line “Oh” tells that this line is forceful. We can see that the speaker feels powerfully about what he is trying to say here. “…I doubted if I ever should come back” (line 14-15) This could mean that the road or the choice he chose will have an effect on his life as far as they cannot be unfinished.

“I took the one less traveled by, and that has made all the difference” (line 19-20) could mean that he has come to the decision that, for good or ill, the choice he has made will be permanent and highly effecting of his life. He looks ahead to time when he can look back and tell that the choice he made, whether wisely or unwisely, was the point at which his life’s path was set. The speaker tells us what he will be going to say in the future. In terms of what he is now, just looking at the path as far as he sees, cannot tell whether the future he led will be good or bad. He knows that his decision is important and it’s going to make big differences in his life.

In conclusion, Robert Frost made his decision to take the path that is less traveled by based on his distinctive beliefs, and his view without the effect of the community. “The Road Not Taken” it can be described that the ability of the individual to travel from various life opportunities is limited. Everyone has to make difficult and unpredictable decision once in their life. Finally, look at the choices that we have made, and like Frost, feel that our choices have changed in our lives.

About “The Road Not Taken” by Robert Frost. (2021, Apr 08). Retrieved from https://papersowl.com/examples/about-the-road-not-taken-by-robert-frost/