About Slavery and Freedom 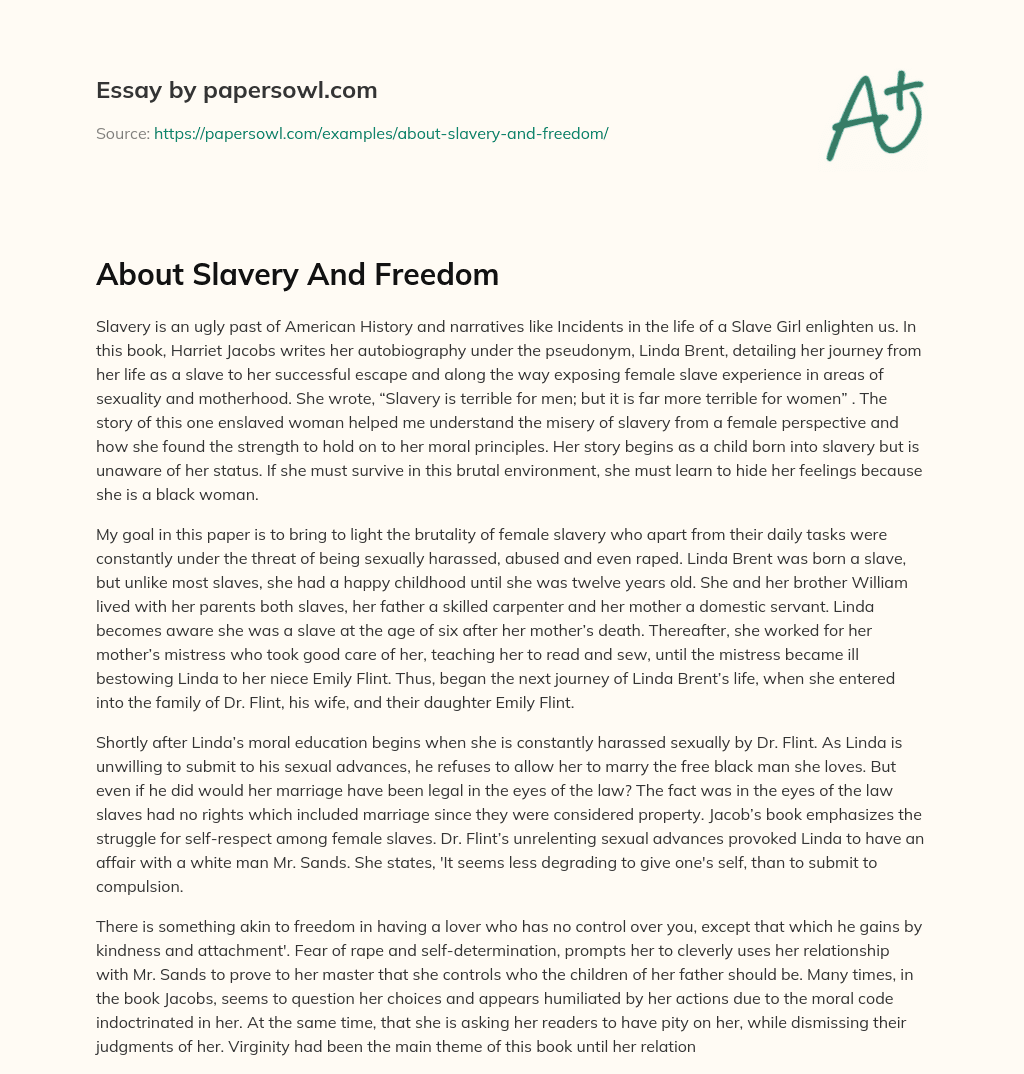 Slavery is an ugly past of American History and narratives like Incidents in the life of a Slave Girl enlighten us. In this book, Harriet Jacobs writes her autobiography under the pseudonym, Linda Brent, detailing her journey from her life as a slave to her successful escape and along the way exposing female slave experience in areas of sexuality and motherhood. She wrote, “Slavery is terrible for men; but it is far more terrible for women” . The story of this one enslaved woman helped me understand the misery of slavery from a female perspective and how she found the strength to hold on to her moral principles. Her story begins as a child born into slavery but is unaware of her status. If she must survive in this brutal environment, she must learn to hide her feelings because she is a black woman.

My goal in this paper is to bring to light the brutality of female slavery who apart from their daily tasks were constantly under the threat of being sexually harassed, abused and even raped. Linda Brent was born a slave, but unlike most slaves, she had a happy childhood until she was twelve years old. She and her brother William lived with her parents both slaves, her father a skilled carpenter and her mother a domestic servant. Linda becomes aware she was a slave at the age of six after her mother’s death. Thereafter, she worked for her mother’s mistress who took good care of her, teaching her to read and sew, until the mistress became ill bestowing Linda to her niece Emily Flint. Thus, began the next journey of Linda Brent’s life, when she entered into the family of Dr. Flint, his wife, and their daughter Emily Flint.

Shortly after Linda’s moral education begins when she is constantly harassed sexually by Dr. Flint. As Linda is unwilling to submit to his sexual advances, he refuses to allow her to marry the free black man she loves. But even if he did would her marriage have been legal in the eyes of the law? The fact was in the eyes of the law slaves had no rights which included marriage since they were considered property. Jacob’s book emphasizes the struggle for self-respect among female slaves. Dr. Flint’s unrelenting sexual advances provoked Linda to have an affair with a white man Mr. Sands. She states, ‘It seems less degrading to give one’s self, than to submit to compulsion.

There is something akin to freedom in having a lover who has no control over you, except that which he gains by kindness and attachment’. Fear of rape and self-determination, prompts her to cleverly uses her relationship with Mr. Sands to prove to her master that she controls who the children of her father should be. Many times, in the book Jacobs, seems to question her choices and appears humiliated by her actions due to the moral code indoctrinated in her. At the same time, that she is asking her readers to have pity on her, while dismissing their judgments of her. Virginity had been the main theme of this book until her relationship with Mr. Sands. After becoming a mother, the book’s central theme becomes motherhood.

True womanhood in that era for white women were virginity, marriage, and motherhood which did not apply to black women who were property. Therefore, the author had to be very careful to address in her book to white readers, to read the book from a slave woman’s perspective. She shows the readers the turmoil that slave women went through, she states “Alas, what mockery it is for a slave mother to try to pray back her dying child to life! Death is better than slavery” (Jacobs 54). Death was an option to end her and her children’s misery, but so was escape to freedom. Both circumstances led to the same goal, keeping her children with her either in death or in freedom.

The extended family members in Linda’s life are Aunt Nancy who was a mother figure to her, Uncle Benjamin, and Uncle Philip. Uncle Benjamin had escaped successfully, inspiring Linda to run away and hide in a crawlspace, built by her Uncle Philip in her grandmother Martha’s attic. Linda hid in this crawlspace without light, much air, and no heating, while watching her children grow for the next seven years. She watched Mr. Sands send Ellen away to his cousin Mrs. Hobbs in New York on the pretext of protection from Dr. Flint, and promised to educate her. The challenge for Linda had not been defiance, but leaving her family. Until this part, she has shown the readers how strong the woman she was but motherhood softened her.

The only constant and support in Linda’s life was her grandmother Martha. Martha was a virtuous woman of integrity and a loyal slave that earned her freedom from her mistress. Linda had failed to live up to the expectations of her grandmother’s vision of womanhood after having two children out of wedlock. She was constantly chastised by Martha for attempting to leave her children and run away. But even Martha shows us despite her values, she too defies the evil system of slavery and the immoral behavior of slaveholders to woman. Her defiance is very obvious in hiding Linda in her attic and finally consenting to her escape to New York.

In New York, Linda takes up employment as a nanny in the Bruce household, whom she is very loyal too as they have no prejudice against her and treat her well. They sent her to New England with their child, to evade capture when New York implements the Fugitive State Law. She meets her daughter Ellen but is dismayed that she had not been kept or educated well. Linda stated in her book “Mr. Sands had not kept his promise to emancipate them. I had also been deceived about Ellen. What security had I with regard to Benjamin? I felt that I had none”. Linda attempted to tell her daughter Ellen about her father and their relationship.

In my opinion Jacobs was judgmental about her morality and the decisions she made as a mother but is empowered when her daughter affirms her love only to her, thus discarding her past. Linda ends her book by stating “Reader, my story ends with freedom; not in the usual way, with marriage. I and my children are now free!’. Here Harriet Jacobs has acknowledged her ending is not conventional but was grateful to Mrs. Bruce for securing her and her children’s freedom. In the nineteenth-century women were not free after marriage, they were considered the property of their husband. Jacobs voice of moral experience clearly demonstrates that she had no desire to be the property of anyone, after being in bondage for two decades.

Harriet Jacobs narrated her life story with the hope that white women in the North would get to learn about the plight of enslaved black women in the South. She wanted to raise awareness of how enslaved black women on the pretext of being considered property were subjected to sexual abuse and rape by their masters apart from being whipped, beaten, branded and tortured. Being the mother of two slave children out of wedlock, she acknowledges her sexual immorality, but also cleverly portrays herself more as a victim who would stoop to any depth for freedom. A key theme that stood out is sexuality and a slave woman’s challenge with motherhood.

In my conclusion, the evils of slavery were experienced by both genders, however, women experienced more hell at the hands of their masters and mistresses. Slave mothers watched helplessly as their children were being sold. The future of slavery depended on black woman reproducing, thus making them vulnerable to the sexual urges of their masters and the jealousy and cruelty of their mistresses. Pregnant slaves worked until childbirth and returned if not sooner, a fortnight later. The history of slavery is an interdependence of the slaveholders and the enslaved.

The political and economic status of slaveholders increased by the number of slaves they possessed and the size of their plantations. The slaves, on the contrary, needed food, clothing, and protection from slave patrols or poor free white men who formed vigilance committees just to feel empowered and superior. The experience of Harriet Jacobs life as a slave also shows how important community was to these slaves as a source of survival. To me, Jacobs’s book is the voice of struggle, virtues, defiance, survival, love, betrayal and freedom.

About Slavery And Freedom. (2022, Feb 10). Retrieved from https://papersowl.com/examples/about-slavery-and-freedom/

The is Anti Slavery

The Issue of Slavery in Kindred