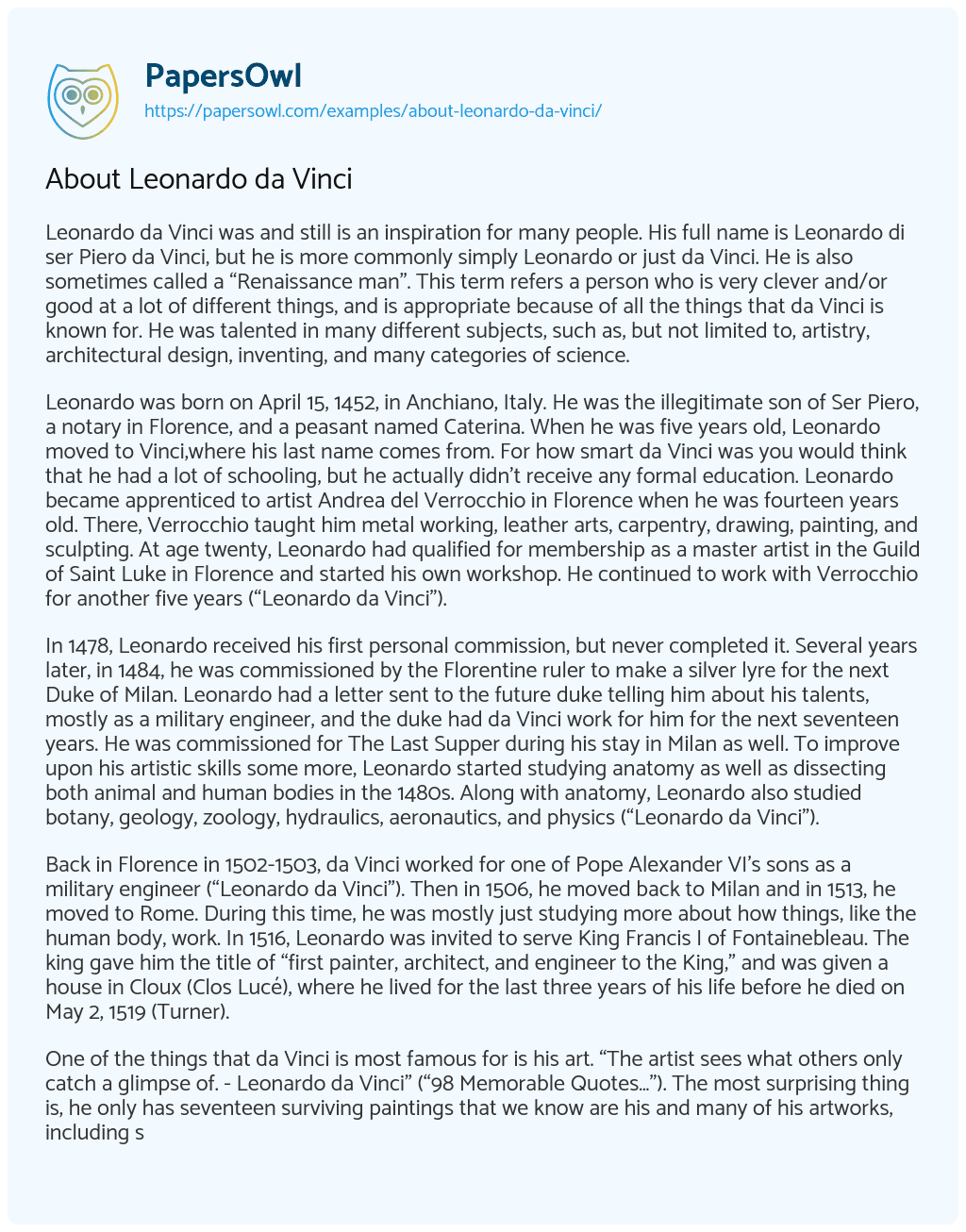 Leonardo da Vinci was and still is an inspiration for many people. His full name is Leonardo di ser Piero da Vinci, but he is more commonly simply Leonardo or just da Vinci. He is also sometimes called a “Renaissance man”. This term refers a person who is very clever and/or good at a lot of different things, and is appropriate because of all the things that da Vinci is known for. He was talented in many different subjects, such as, but not limited to, artistry, architectural design, inventing, and many categories of science.

Leonardo was born on April 15, 1452, in Anchiano, Italy. He was the illegitimate son of Ser Piero, a notary in Florence, and a peasant named Caterina. When he was five years old, Leonardo moved to Vinci,where his last name comes from. For how smart da Vinci was you would think that he had a lot of schooling, but he actually didn’t receive any formal education. Leonardo became apprenticed to artist Andrea del Verrocchio in Florence when he was fourteen years old. There, Verrocchio taught him metal working, leather arts, carpentry, drawing, painting, and sculpting. At age twenty, Leonardo had qualified for membership as a master artist in the Guild of Saint Luke in Florence and started his own workshop. He continued to work with Verrocchio for another five years (“Leonardo da Vinci”).

In 1478, Leonardo received his first personal commission, but never completed it. Several years later, in 1484, he was commissioned by the Florentine ruler to make a silver lyre for the next Duke of Milan. Leonardo had a letter sent to the future duke telling him about his talents, mostly as a military engineer, and the duke had da Vinci work for him for the next seventeen years. He was commissioned for The Last Supper during his stay in Milan as well. To improve upon his artistic skills some more, Leonardo started studying anatomy as well as dissecting both animal and human bodies in the 1480s. Along with anatomy, Leonardo also studied botany, geology, zoology, hydraulics, aeronautics, and physics (“Leonardo da Vinci”).

Back in Florence in 1502-1503, da Vinci worked for one of Pope Alexander VI’s sons as a military engineer (“Leonardo da Vinci”). Then in 1506, he moved back to Milan and in 1513, he moved to Rome. During this time, he was mostly just studying more about how things, like the human body, work. In 1516, Leonardo was invited to serve King Francis I of Fontainebleau. The king gave him the title of “first painter, architect, and engineer to the King,” and was given a house in Cloux (Clos Lucé), where he lived for the last three years of his life before he died on May 2, 1519 (Turner).

One of the things that da Vinci is most famous for is his art. “The artist sees what others only catch a glimpse of. – Leonardo da Vinci” (“98 Memorable Quotes…”). The most surprising thing is, he only has seventeen surviving paintings that we know are his and many of his artworks, including sculptures, remain unfinished (Heydenreich). Leonardo usually painted with oil paint that he had made himself and later in his career he had used tempera, which was made from egg whites back then. He would cover his canvas in a light gray or brown for the underpainting, and he really only used natural or muted hues. He used blues, browns, and greens in his paintings to match the natural colors of the earth. Leonardo would also apply the technique of sfumato in his paintings. Sfumato comes from the Italian word for “smoke” and it is when the colors are blended enough that there are no visible transitions, lines, or edges (Grey). One of Leonardo’s most famous paintings is the “Mona Lisa”(c. 1503) which is thought to be the portrait of a woman named Lisa Gherardini. This painting has the use of both sfumato and chiaroscuro, or contrast between light and dark. The “Mona Lisa” is most famous for the smile of the woman. There weren’t really any other portraits that portraying someone smiling like that and da Vinci wanted to show emotion through her smile. “Painting is poetry that is seen rather that felt, and poetry is painting that is felt, rather than seen. – Leonardo da Vinci (“98 Memorable Quotes…”). The “Mona Lisa” has inspired many other artists too. Salvador Dalí, Eugene Bataille, Marcel Duchamp, Andy Warhol, and many other artists have made recreations of this painting, usually with their own little twist to it (Sethi).

Leonardo da Vinci also sculpted. One of his sculptures was a piece called “Horse and Rider”. It was a beeswax sculpture that was 25cm. tall, 23cm. Long, and 9cm. wide. It depicted a man in full renaissance military outfitting, sitting atop a horse. This piece was rediscovered in 1985 and had a mould made of it because it was damaged and eventually, some bronze castings were made from it (“Horse and Rider”).

Da Vinci, the man with many talents, was also an architect. He had made many drawings of beautiful buildings and ideas, but unfortunately never got to actually build them. One of his designs was not a building, but a whole city. Leonardo da Vinci’s inspiration for the “Ideal City”, was from the Bubonic Plague that killed one third of the population of Milan when it swept through. He designed a series of canals under the city that were to be used for commercial purposes and as a sewage system. His “Ideal City” also was designed to have two levels. The lower level was for tradesman and travelers and the upper level for people who lived in the city. He designed the roads to be much wider than usual so that people wouldn’t come into contact with each other as much, since that is how the plague spread so quickly. Since this city was a very big project and required a lot of things, it was never built (“Ideal City”).

Not only was Leonardo good at designing buildings and other architecture, but he was also good at inventing. His invention that is probably the most famous is the flying machine. “When once you have tasted flight, you will forever walk the earth with your eyes turned skyward, for there you have been, and there you will always long to be. – Leonardo da Vinci” (“98 Memorable Quotes…”). The inspiration for this machine came from flying creatures, mostly bats. Unfortunately, this invention, though it inspired other people to try to figure out how to fly, wouldn’t have actually worked. Da Vinci also came up with the idea of a helicopter using an aerial screw. He also had a drawing of a parachute before they had actually been made, so he invented that too. Since Leonardo was a military engineer, he had invented a thirty-three barrelled organ, which would be like a modern day machine gun just much larger, an armored vehicle (tank), a triple barrel cannon, and a giant crossbow that fires large rocks. In addition to all of these, he had made a self propelled cart, scuba gear, and a revolving bridge that was portable and could swing across a stream or moat. On top of all of this, da Vinci had also made adjustments to the anemometer and clock of his time to make them more accurate (“Famous Inventions…”).

Something that made Leonardo very good at all the things he did,is that he studied many sciences. In 1489, he started a notebook on human anatomy to try to understand how the human body works. “Nothing can be loved or hated unless it is first understood. – Leonardo da Vinci (“98 Memorable Quotes…”). To find this out he had to dissect about thirty corpses. He also made plaster casts of organs by injecting them with wax. Along with anatomy, he studied botany, geology, optics, and zoology, which helps with making realistic art. To help with his inventing and architecture, he studied physics, hydraulics, and aeronautics (“Science”).

Many people of different professions have been inspired by Leonardo da Vinci, which isn’t actually that surprising since he was good at so many things. Not only was he an artist and inventor like most people know him from, but he was also an architect and scientist. He made so many designs and artworks, but it is unfortunate that many of them were destroyed of left unfinished. “Iron rusts from disuse, stagnant water loses its purity, and in cold weather becomes frozen; even so does inaction sap the vigors of the mind. – Leonardo da Vinci (“98 Memorable Quotes…”).