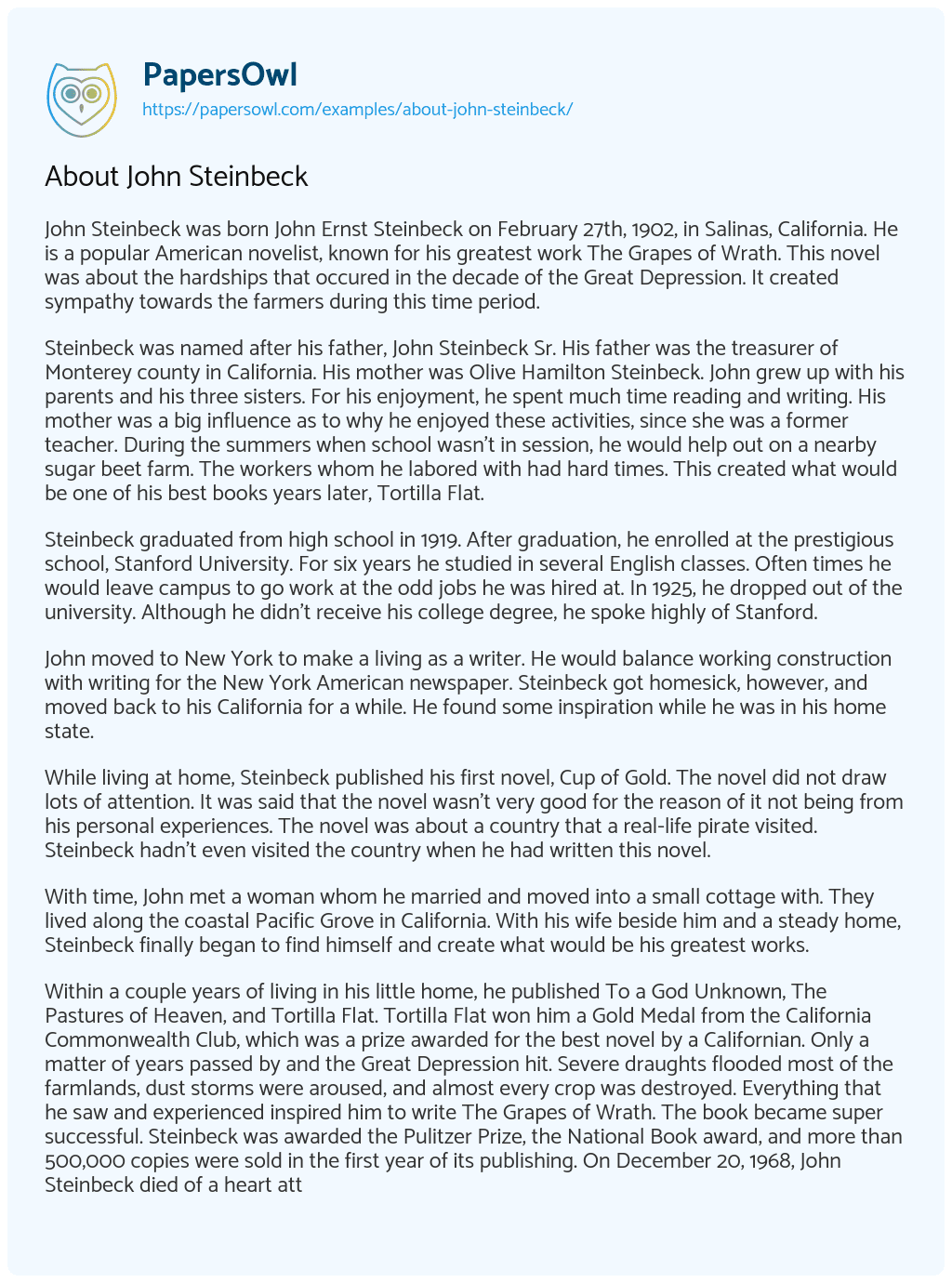 John Steinbeck was born John Ernst Steinbeck on February 27th, 1902, in Salinas, California. He is a popular American novelist, known for his greatest work The Grapes of Wrath. This novel was about the hardships that occured in the decade of the Great Depression. It created sympathy towards the farmers during this time period.

Steinbeck was named after his father, John Steinbeck Sr. His father was the treasurer of Monterey county in California. His mother was Olive Hamilton Steinbeck. John grew up with his parents and his three sisters. For his enjoyment, he spent much time reading and writing. His mother was a big influence as to why he enjoyed these activities, since she was a former teacher. During the summers when school wasn’t in session, he would help out on a nearby sugar beet farm. The workers whom he labored with had hard times. This created what would be one of his best books years later, Tortilla Flat.

Steinbeck graduated from high school in 1919. After graduation, he enrolled at the prestigious school, Stanford University. For six years he studied in several English classes. Often times he would leave campus to go work at the odd jobs he was hired at. In 1925, he dropped out of the university. Although he didn’t receive his college degree, he spoke highly of Stanford.

John moved to New York to make a living as a writer. He would balance working construction with writing for the New York American newspaper. Steinbeck got homesick, however, and moved back to his California for a while. He found some inspiration while he was in his home state.

While living at home, Steinbeck published his first novel, Cup of Gold. The novel did not draw lots of attention. It was said that the novel wasn’t very good for the reason of it not being from his personal experiences. The novel was about a country that a real-life pirate visited. Steinbeck hadn’t even visited the country when he had written this novel.

With time, John met a woman whom he married and moved into a small cottage with. They lived along the coastal Pacific Grove in California. With his wife beside him and a steady home, Steinbeck finally began to find himself and create what would be his greatest works.

Within a couple years of living in his little home, he published To a God Unknown, The Pastures of Heaven, and Tortilla Flat. Tortilla Flat won him a Gold Medal from the California Commonwealth Club, which was a prize awarded for the best novel by a Californian. Only a matter of years passed by and the Great Depression hit. Severe draughts flooded most of the farmlands, dust storms were aroused, and almost every crop was destroyed. Everything that he saw and experienced inspired him to write The Grapes of Wrath. The book became super successful. Steinbeck was awarded the Pulitzer Prize, the National Book award, and more than 500,000 copies were sold in the first year of its publishing. On December 20, 1968, John Steinbeck died of a heart attack in New York. His ashes were buried in the town he dearly loved of Salinas, California. Steinbeck was only 66 years old, but he released many works that his fans will cherish. The Grapes of Wrath will be a novel that many will always remember him by.