About Child Labor in Nepal 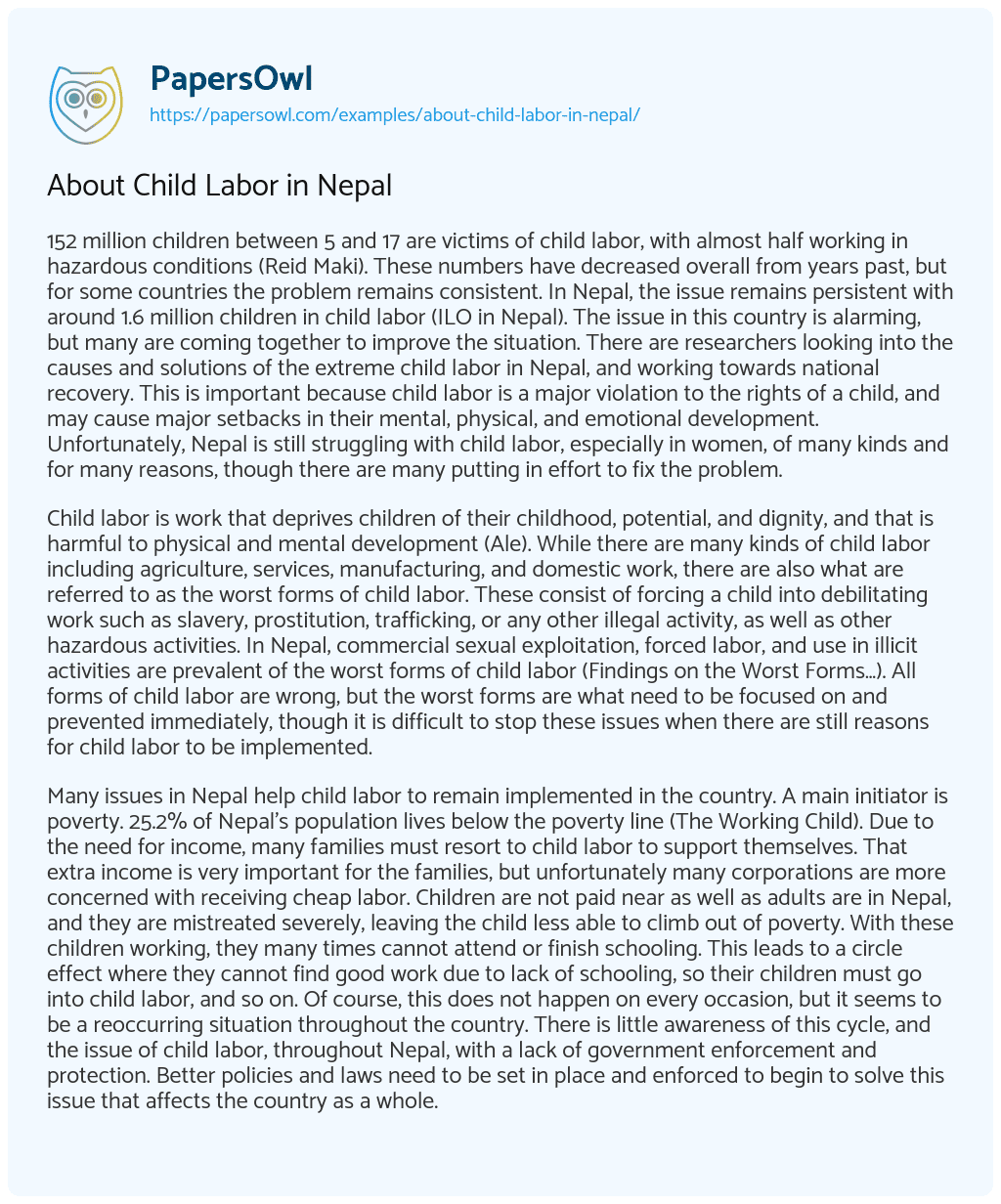 152 million children between 5 and 17 are victims of child labor, with almost half working in hazardous conditions (Reid Maki). These numbers have decreased overall from years past, but for some countries the problem remains consistent. In Nepal, the issue remains persistent with around 1.6 million children in child labor (ILO in Nepal). The issue in this country is alarming, but many are coming together to improve the situation. There are researchers looking into the causes and solutions of the extreme child labor in Nepal, and working towards national recovery. This is important because child labor is a major violation to the rights of a child, and may cause major setbacks in their mental, physical, and emotional development. Unfortunately, Nepal is still struggling with child labor, especially in women, of many kinds and for many reasons, though there are many putting in effort to fix the problem.

Many issues in Nepal help child labor to remain implemented in the country. A main initiator is poverty. 25.2% of Nepal’s population lives below the poverty line (The Working Child). Due to the need for income, many families must resort to child labor to support themselves. That extra income is very important for the families, but unfortunately many corporations are more concerned with receiving cheap labor. Children are not paid near as well as adults are in Nepal, and they are mistreated severely, leaving the child less able to climb out of poverty. With these children working, they many times cannot attend or finish schooling. This leads to a circle effect where they cannot find good work due to lack of schooling, so their children must go into child labor, and so on. Of course, this does not happen on every occasion, but it seems to be a reoccurring situation throughout the country. There is little awareness of this cycle, and the issue of child labor, throughout Nepal, with a lack of government enforcement and protection. Better policies and laws need to be set in place and enforced to begin to solve this issue that affects the country as a whole.

While everyone in Nepal is affected by child labor and its causes, some are affected more than others. This is due to racial and social inequality and discrimination. Young girls are more at risk of child labor, as in Nepal boys are treated more highly than girls, and less manipulated for work. Many times the boys in a family are allowed to go to school, but the girls are forced into work and sometimes forced out of school. About 48% of girls in Nepal are involved in child labor, compared to the 36% of boys, with 60% of hazardous work being filled by girls (ILO in Nepal). This hazardous work for women is localized in Kathmandu, the capital of Nepal, due to the large night entertainment industry. An interview by Kiran Nazish found that many girls travel to Kathmandu to make an income for their family, often traveling from small towns. The work in this industry includes dance bars, massage parlors, and other places where the young girls are forced into sexual activities, making them vulnerable to human trafficking. Children from indigenous groups are more likely to enter child labor as well. They are treated unfairly and drop out of school to enter the work force. This is mainly because of the inability of the children’s parents to earn enough economically, as well as difficulty to receive a valid birth certificate for many. A third type of person typically involved in child labor is orphan children, unsupported by parental wealth. For reasons such as racial and social discrimination, girls, indigenous people, and orphans are more susceptible to child labor, though the country is working towards more equality by entering new laws and policies.

Efforts are being made by many to fix the child labor issues in Nepal. Many acts have been passed in past years which look to improve the well-being of children in Nepal, as well as looking to decrease the amount of hazardous child labor occurring. US Department of Labor states many child labor acts that Nepal has ratified, including most international conventions. Some of these include a minimum age, restricting the worst forms of child labor, armed conflict, and child prostitution, as well as hindering forced labor. The issue, though, is that most of the acts are not enforced well enough. The policies have definitely decreased the amount of child labor occurring in Nepal, but not near as much as they could, and should. Examples of this include meeting the standard for the minimum age of work, but not the minimum age for hazardous work (Findings on the Worst Forms…). They also don’t meet the standard for child trafficking, sexual exploitation, or compulsory education age. Not meeting these standards is very detrimental towards the safety of Nepal’s children, as well as the probability of them having a high quality life. There are several social programs working in Nepal through government funding to prevent or limit child labor. Some of these include the Green Flag Movement, the Child Helpline, the Decent work Country Program, and the UNICEF Nepal Country Program (Findings on the Worst Forms…). Groups such as these look to help Nepal address child labor. Additional child labor groups and laws were enforced in 2017 due to an extremely low number of worksite inspections (Findings on the Worst Forms…). Even with all of these groups and policies looking to end child labor in Nepal, the issue is still very large, possibly due to setbacks.

There were many situations which impeded the efforts to reduce child labor in Nepal. Events such as national disasters can cause setbacks in all aspects of the countries well-being. An earthquake occurred in 2015 with a magnitude of 7.8, according to (Magnitude 7.8 earthquake…). This is extremely strong and thoroughly effected the whole country. World Vision states that the earthquake killed around 9,000 people and injured over 22,000. The earthquake created avalanches and landslides, destroying countless homes and forcing thousands into extreme poverty. This national disaster obviously took priority to the programs which had been put in place just so recently. The poverty that came from this event also encouraged child labor, worsening the problem and making it difficult to help. National disasters such as this can easily take focus off of an issue such as child labor, and have many times. Additionally, the outcomes of child labor are also causes of child labor. When children drop out of schooling to join the workforce to help their families, they are becoming like their parents, potentially unable to receive a satisfactory financial status. This creates a horrible cycle which may push their children into labor, and so on. Another factor to this cycle is mental health, as child labor can compromise a child’s development: physically, mentally, socially, or educationally. The children may be mistreated and put in hazardous situations that leave them unprepared or unable to support themselves or a family in the future. Setbacks such as these make it difficult to decrease the amount of child labor and keep focus on the issue.

The matter of child labor still has a strong hold on Nepal today because of poverty, lack of education, and the many complications that our world provides. The issue relates to many contemporary world issues as it violates the human rights of many children, as well as being caused partially by the problems of poverty and inequality. These problems are seen all throughout the world, though they may be worse in select places such as Nepal. It is always concerning when one country is not improving as quickly as the rest of the world, but we are fortunate enough to have groups of people that want to help fix these issues. Even though the problem of child labor in Nepal is a cause of concern as of today, there are many groups looking to pass acts and policies to help improve the lives of Nepal’s children. Though Nepal’s issue with child labor is far from over, especially for certain groups, there is a large amount of effort being applied to stop and prevent all kinds of child labor.

About Child Labor in Nepal. (2021, Mar 10). Retrieved from https://papersowl.com/examples/about-child-labor-in-nepal/