Abortion should be Illegal or Not? 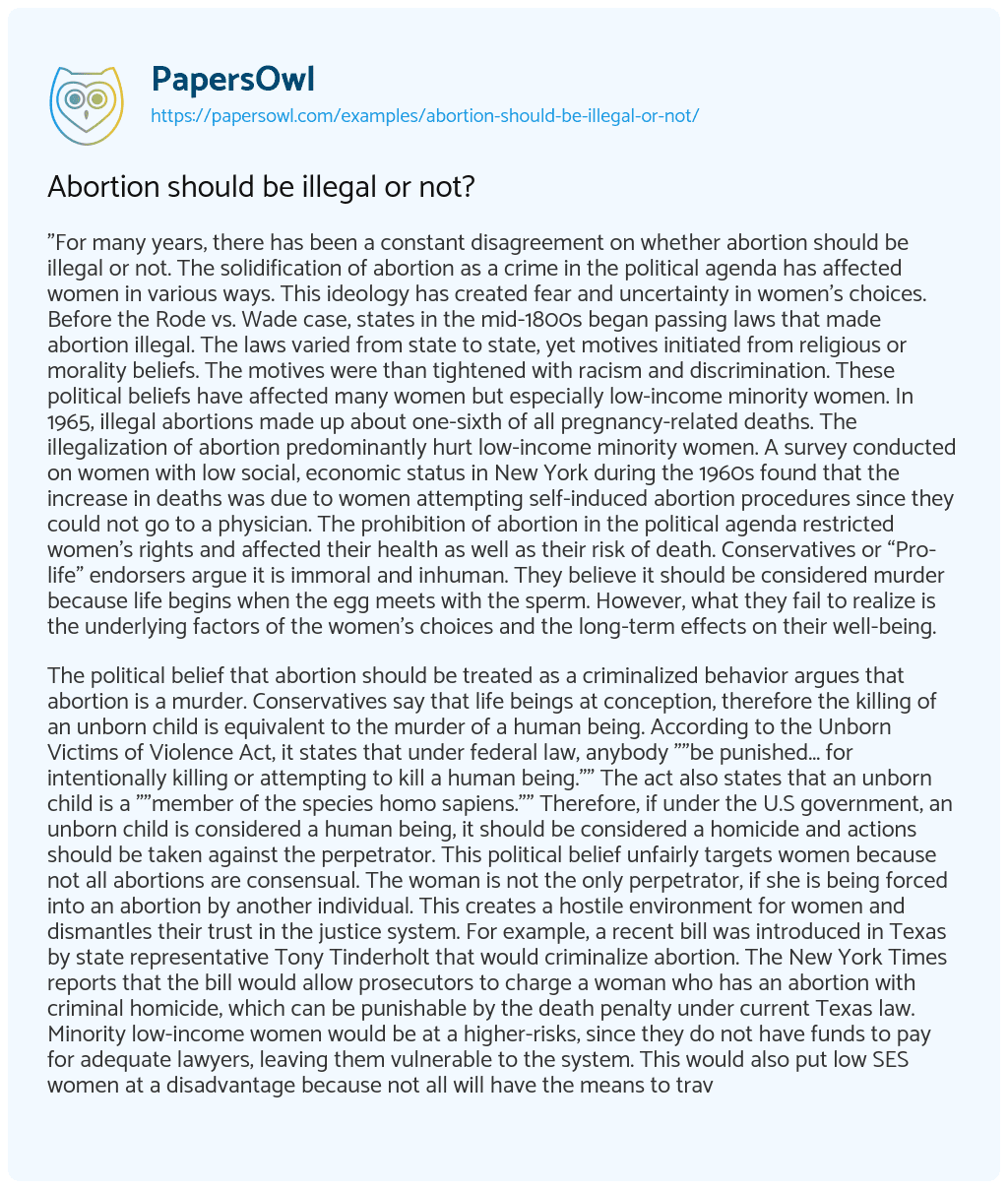 “For many years, there has been a constant disagreement on whether abortion should be illegal or not. The solidification of abortion as a crime in the political agenda has affected women in various ways. This ideology has created fear and uncertainty in women’s choices. Before the Rode vs. Wade case, states in the mid-1800s began passing laws that made abortion illegal. The laws varied from state to state, yet motives initiated from religious or morality beliefs. The motives were than tightened with racism and discrimination. These political beliefs have affected many women but especially low-income minority women. In 1965, illegal abortions made up about one-sixth of all pregnancy-related deaths. The illegalization of abortion predominantly hurt low-income minority women. A survey conducted on women with low social, economic status in New York during the 1960s found that the increase in deaths was due to women attempting self-induced abortion procedures since they could not go to a physician. The prohibition of abortion in the political agenda restricted women’s rights and affected their health as well as their risk of death. Conservatives or “Pro-life” endorsers argue it is immoral and inhuman. They believe it should be considered murder because life begins when the egg meets with the sperm. However, what they fail to realize is the underlying factors of the women’s choices and the long-term effects on their well-being.

The political belief that abortion should be treated as a criminalized behavior argues that abortion is a murder. Conservatives say that life beings at conception, therefore the killing of an unborn child is equivalent to the murder of a human being. According to the Unborn Victims of Violence Act, it states that under federal law, anybody “”be punished… for intentionally killing or attempting to kill a human being.”” The act also states that an unborn child is a “”member of the species homo sapiens.”” Therefore, if under the U.S government, an unborn child is considered a human being, it should be considered a homicide and actions should be taken against the perpetrator. This political belief unfairly targets women because not all abortions are consensual. The woman is not the only perpetrator, if she is being forced into an abortion by another individual. This creates a hostile environment for women and dismantles their trust in the justice system. For example, a recent bill was introduced in Texas by state representative Tony Tinderholt that would criminalize abortion. The New York Times reports that the bill would allow prosecutors to charge a woman who has an abortion with criminal homicide, which can be punishable by the death penalty under current Texas law. Minority low-income women would be at a higher-risks, since they do not have funds to pay for adequate lawyers, leaving them vulnerable to the system. This would also put low SES women at a disadvantage because not all will have the means to travel to other states or countries to receive a proper abortion.

Abortion as a political belief affects women beyond the federal system. This belief is sometimes carried into personal settings, where women are denied or given medical services they did not ask for. Women will sometimes struggle to find a physician who can perform an abortion because many refused to do these procedures as it is against their “morals.” The film “No Mas Bebes,” narrates the traumatic experience of the Mexican migrant women who were sterilized after delivery without valid consent. Women were racially profiled and taken advantage during a difficult situation. These women did not speak English and were severely drugged when they were forced to sign documents, which they could not read. In this case, physicians took them upon themselves to intervene in areas they had no rights. Reasons for their immoral behavior was to “reduce” possibility of future abortions and population reproductivity in this minority group. The Mexican migrant women suffered extreme traumas like marital issues because they did not know they were sterilized; others had PTSD and refused to go back to hospitals or seek any medical assistance. Criminalized abortion would especially affect minority women because of factors like racism and discrimination associated with it. Decisions over a women’s reproductive system have constantly been of discussion in politics. There is this constant attempt at controlling any decisions related to women as if they are inept or unable to make their own choices. It has caused minority women to be racially profiled in vulnerable settings, eliminating the trust in the one place that is meant to take care of them. This political belief can extend to personal areas of life affecting women physically, emotionally, and mentally.

Furthermore, Criminalization of abortion increased mortality rates among women. Prior to Roe v. Wade, the National Abortion Federation (NAF) estimated about 1.2 million deaths per year due to illegal abortions. This is because women could not seek medical help and so many attempted to self-induce their abortions. Women who could not afford to go to the hospital suffered severe medical issues and often died. Others opted to go to untrained practitioners without any health regulations and exposed themselves to the risks of diseases. Hospitals were not performing abortions but were treating thousands of women who were dying from the terrible effects of abortions performed without proper medical skills. Illegal abortions permanently change a woman’s live because they either have to face homicide charges or resort to alternatives that put their lives in danger. As a result of this belief in the political system, women are gentrified and stripped from their rights leading to tragic consequences.

Although abortion does need regulation, policies should be made toward helping and providing the correct resources for women rather than trying to criminalize them. There are underlying reasons to why a woman may be deciding to abort that she often does not feel comfortable talking about and so that is why a friendly/trusting environment should be provided. These extreme political beliefs that abortion is murder, causes trauma on women and makes it more difficult to cope with the situation.

In conclusion, political beliefs like abortion have affected minority low-income women in most aspects of life. It breaks the trust in the justice system, making them feel unprotected and persecuted. It also affects their health, when health-care facilities refuse to give them the proper care because of personal political beliefs. Criminalizing abortion promotes an antagonistic environment for women and limits them from making their own choices. It violates human rights and sets them as prisoners in their own home. Overall, it affects them physically, emotionally, and mentally due to the lack of support and empathy in both the political and social system.”

Abortion should be illegal or not?. (2021, Apr 12). Retrieved from https://papersowl.com/examples/abortion-should-be-illegal-or-not/

Why Abortion should be Illegal