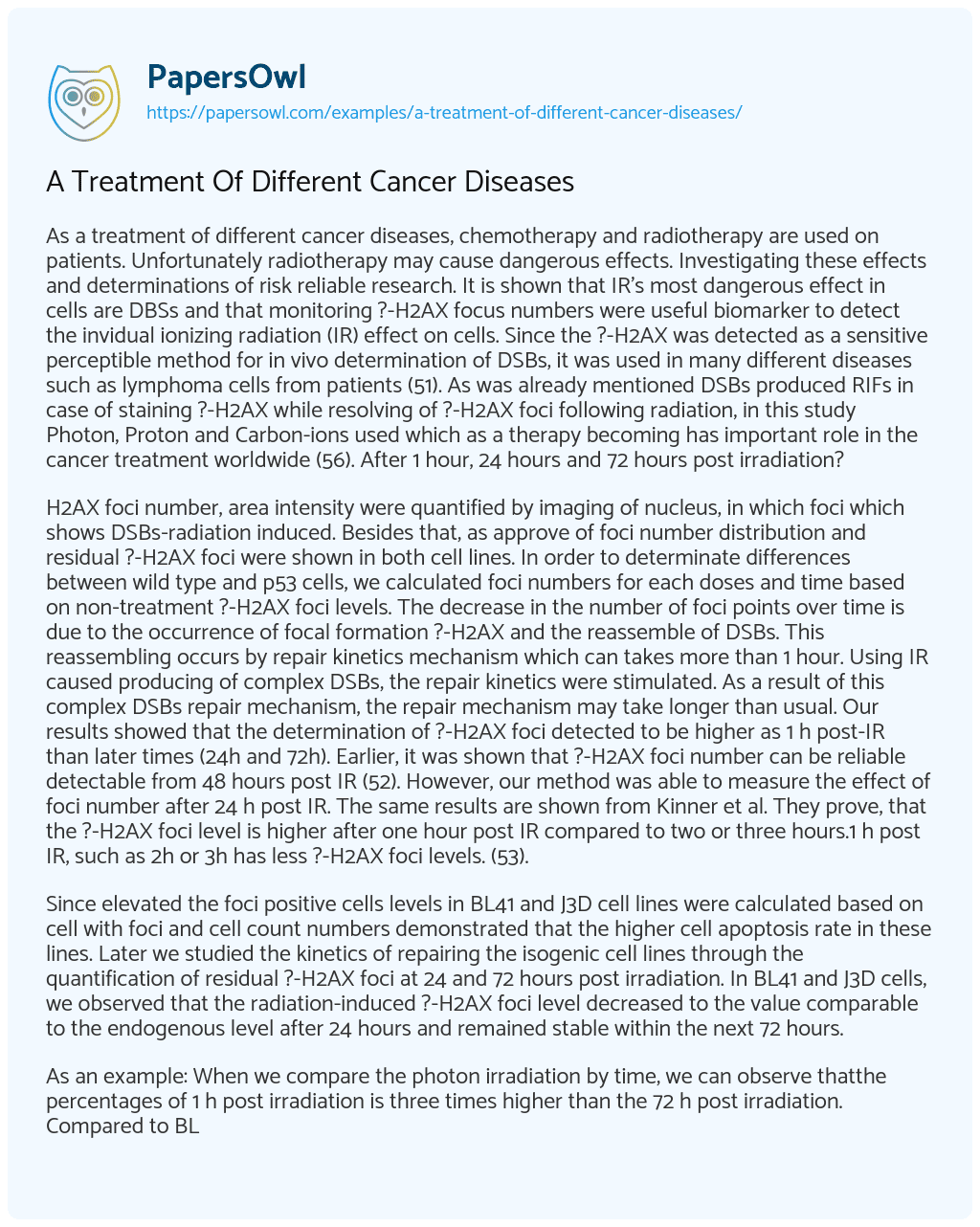 As a treatment of different cancer diseases, chemotherapy and radiotherapy are used on patients. Unfortunately radiotherapy may cause dangerous effects. Investigating these effects and determinations of risk reliable research. It is shown that IR’s most dangerous effect in cells are DBSs and that monitoring ?-H2AX focus numbers were useful biomarker to detect the invidual ionizing radiation (IR) effect on cells. Since the ?-H2AX was detected as a sensitive perceptible method for in vivo determination of DSBs, it was used in many different diseases such as lymphoma cells from patients (51). As was already mentioned DSBs produced RIFs in case of staining ?-H2AX while resolving of ?-H2AX foci following radiation, in this study Photon, Proton and Carbon-ions used which as a therapy becoming has important role in the cancer treatment worldwide (56). After 1 hour, 24 hours and 72 hours post irradiation?

H2AX foci number, area intensity were quantified by imaging of nucleus, in which foci which shows DSBs-radiation induced. Besides that, as approve of foci number distribution and residual ?-H2AX foci were shown in both cell lines. In order to determinate differences between wild type and p53 cells, we calculated foci numbers for each doses and time based on non-treatment ?-H2AX foci levels. The decrease in the number of foci points over time is due to the occurrence of focal formation ?-H2AX and the reassemble of DSBs. This reassembling occurs by repair kinetics mechanism which can takes more than 1 hour. Using IR caused producing of complex DSBs, the repair kinetics were stimulated. As a result of this complex DSBs repair mechanism, the repair mechanism may take longer than usual. Our results showed that the determination of ?-H2AX foci detected to be higher as 1 h post-IR than later times (24h and 72h). Earlier, it was shown that ?-H2AX foci number can be reliable detectable from 48 hours post IR (52). However, our method was able to measure the effect of foci number after 24 h post IR. The same results are shown from Kinner et al. They prove, that the ?-H2AX foci level is higher after one hour post IR compared to two or three hours.1 h post IR, such as 2h or 3h has less ?-H2AX foci levels. (53).

Since elevated the foci positive cells levels in BL41 and J3D cell lines were calculated based on cell with foci and cell count numbers demonstrated that the higher cell apoptosis rate in these lines. Later we studied the kinetics of repairing the isogenic cell lines through the quantification of residual ?-H2AX foci at 24 and 72 hours post irradiation. In BL41 and J3D cells, we observed that the radiation-induced ?-H2AX foci level decreased to the value comparable to the endogenous level after 24 hours and remained stable within the next 72 hours.

As an example: When we compare the photon irradiation by time, we can observe thatthe percentages of 1 h post irradiation is three times higher than the 72 h post irradiation. Compared to BL41 p53 cells, Carbon and Proton IR foci have positive percentage levels. Decreasing levels were detected in BL41 wild type cells although Photon IR treatment foci positive levels were demonstrated with a lower speed reduction. These reductions may occure due to functional DNA repair in time. As a result, Photon radiation was found as a more apoptotic treatment than non-toxic damage.

To study whether the role of p53 of the J3D and BL41 cells following the exposure to irradiation, especially Carbon and Proton IR treatments have been documented as more damaging than the Photon IR treatment. These two radiation qualities trigger apoptosis.

In regard, J3D and BL41 p53 cells demonstrated a slightly lower cell number compared to the wild type cell numbers. It might be due to the cell death by apoptosis regulated by p53. P53 controls whether a cell survives or undergoes into apoptosis. This fact supported our initial hypothesis to use this mechanism for cancer therapy by reactivating p53 lymphoma cells.

The highest induction of foci within 1 h post-irradiation was found in BL41 p53 cells within the Proton 5 Gy IR treatment. Foci number was demonstrated 13fold decreased in 24 h post-irradiation when foci number level approximately 4.4fold decreased at 72 hours post-irradiation. Our hypothesis is supported by foci number results, already observed in literature (effects proton searched in human tissues). Investigations in clinical treatments show, that even if protons and photons are similar biologically, protons have a 10% stronger effect in the human body (54)

Similar to the observations in ?-H2AX foci number, J3D and BL41 p53 cells there is a significant change between Photon IR and Proton IR levels. Additionally, the reason of p53 mutated cell lines is higher because of p53 doesn’t work. P53 mutation is non-functional. If it is activated there will be a functional p53. The other cell lines seed temperature reduced from vector p53 is activated. On the other hand, the cell cycle phase at which the cells are irradiated affects the observed ?-H2AX foci number.

Intensity differences depend on staining quality. and this experiment less mistake in staining can be seen between two replicates of intensity foci.

Related to the results of differences between proton and photons it is shownthat DNA repair mechanisms are more efficient than DNA damage stimulation. The reason of increasing number of residual foci depends on HR repair mechanism which is lower than NHEJ (56). Nevertheless, their residual foci of Carbon IR treatment in BL41 and J3D p53 cells were slightly higher than in BL41 and J3D wild type cells.

As already mentioned, in the DNA repair mechanism the p53 protein has an important role against the irradiation, such as regulation of cell death pathways and cell cycle. This is directly connected to apoptosis which is stimulated by p53 and also affect the sensitivity to radiation of the cancer cells. It was also shown in clinical studies that the mutation of p53 has a role in radiation therapy of cancer cells.

After radiation, apoptosis is a cell death way for p53 cell lines compared with another cell line. We can observe this from non-treatment samples results and foci number, area results. Nevertheless, DNA repair kinetics after radiation by dose and time are similar to p53 mutations and wild type cell lines. Based on these, activation of p53 has an important role in cancer cells which is subjected to the irradiation. In case of loss of function p53, cancer cells have resistance to stimulation of apoptosis after radiation. It might depend on G2/M checkpoint which if activated, can repair DNA before the pass another phase and if cannot be repaired, is blocked the passing of another phase.

Besides that, early studies have shown that after radiation there is release of G2/M checkpoint as a result of decreasing of DSBs. This way, after that checkpoint cells which have less DSBs are able to to pass G1 phase and finally, DNA damage can be repaired in the next cell cycle. After radiation, the reason of loss of function p53 cells

Taking these considerations,we demonstrated in this thesis that radiation may induce apoptosis in case of loss of function p53 protein (57)

Regarding of this results shown above, the main goal was to measure the effect of radiation in lymphoma disease. With respect to further clinical treatments, thedetection of ?-H2AX with other scales, couldprovide a new way treatening patient who take IR.

A Treatment Of Different Cancer Diseases. (2020, Sep 08). Retrieved from https://papersowl.com/examples/a-treatment-of-different-cancer-diseases/