A Proposal for an Improved Justice System 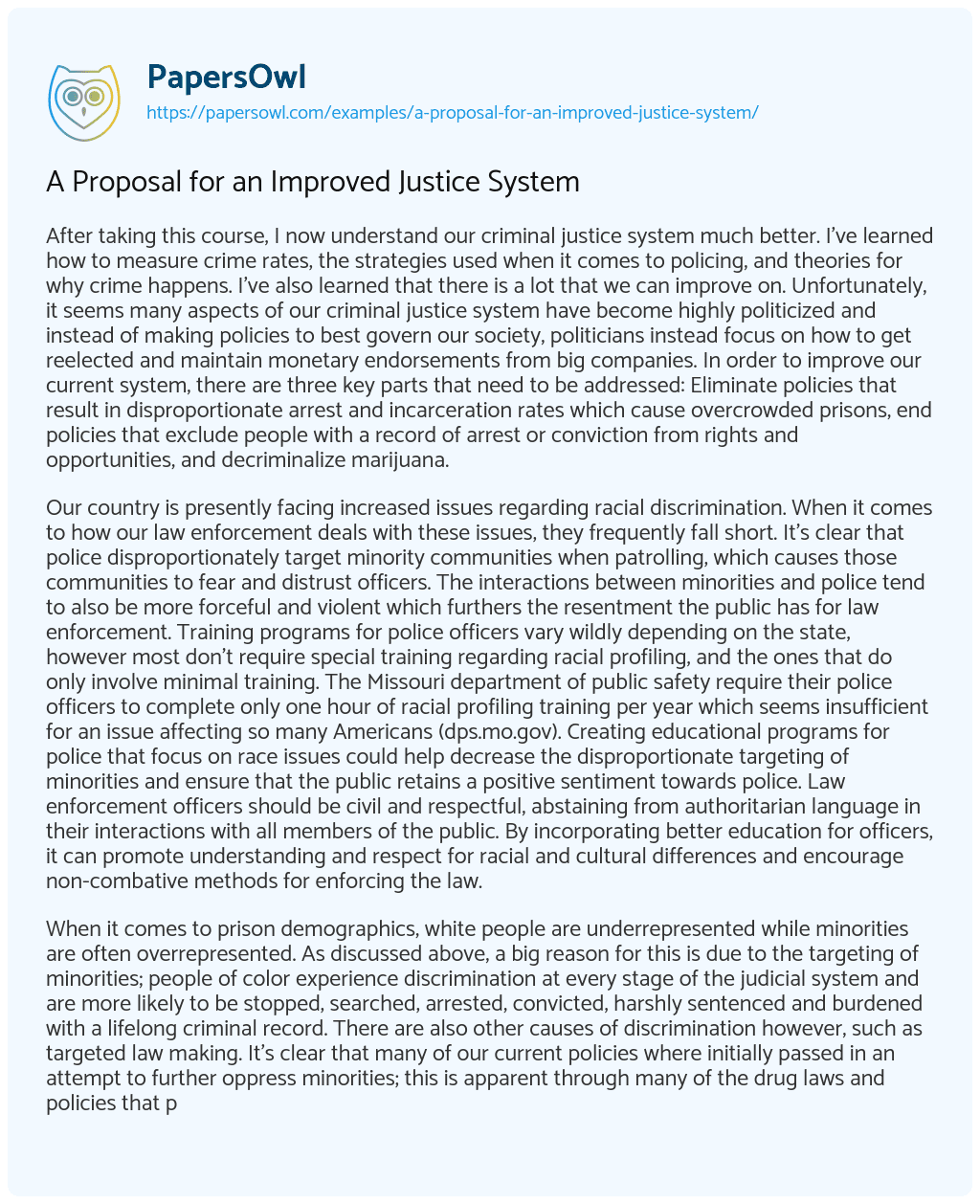 After taking this course, I now understand our criminal justice system much better. I’ve learned how to measure crime rates, the strategies used when it comes to policing, and theories for why crime happens. I’ve also learned that there is a lot that we can improve on. Unfortunately, it seems many aspects of our criminal justice system have become highly politicized and instead of making policies to best govern our society, politicians instead focus on how to get reelected and maintain monetary endorsements from big companies. In order to improve our current system, there are three key parts that need to be addressed: Eliminate policies that result in disproportionate arrest and incarceration rates which cause overcrowded prisons, end policies that exclude people with a record of arrest or conviction from rights and opportunities, and decriminalize marijuana.

Our country is presently facing increased issues regarding racial discrimination. When it comes to how our law enforcement deals with these issues, they frequently fall short. It’s clear that police disproportionately target minority communities when patrolling, which causes those communities to fear and distrust officers. The interactions between minorities and police tend to also be more forceful and violent which furthers the resentment the public has for law enforcement. Training programs for police officers vary wildly depending on the state, however most don’t require special training regarding racial profiling, and the ones that do only involve minimal training. The Missouri department of public safety require their police officers to complete only one hour of racial profiling training per year which seems insufficient for an issue affecting so many Americans (dps.mo.gov). Creating educational programs for police that focus on race issues could help decrease the disproportionate targeting of minorities and ensure that the public retains a positive sentiment towards police. Law enforcement officers should be civil and respectful, abstaining from authoritarian language in their interactions with all members of the public. By incorporating better education for officers, it can promote understanding and respect for racial and cultural differences and encourage non-combative methods for enforcing the law.

When it comes to prison demographics, white people are underrepresented while minorities are often overrepresented. As discussed above, a big reason for this is due to the targeting of minorities; people of color experience discrimination at every stage of the judicial system and are more likely to be stopped, searched, arrested, convicted, harshly sentenced and burdened with a lifelong criminal record. There are also other causes of discrimination however, such as targeted law making. It’s clear that many of our current policies where initially passed in an attempt to further oppress minorities; this is apparent through many of the drug laws and policies that permanently exclude people with a drug arrest. Even if a person does not face jail or prison time, a drug conviction often imposes a lifelong ban on many aspects of social, economic and political life. But the discrimination doesn’t stop with the initial charge, many minorities face further prejudices as they go through the criminal justice system. This includes less leniency and harsher sentencing, which creates other barriers and limitations regarding voting, employment, loans, financial aid, and other forms of public assistance. This perpetuates racial inequality in our country; prison is possibly the only place where minorities become the majority and it’s not because they’re committing more crime.

Another issue in our criminal justice system is overpopulated prisons. The United States imprisons more people than any other nation in the world (nearly twenty-five percent of the world’s incarcerated population), which is largely due to the war on drugs (drugpolicy.org). Politically fueled drug laws and harsh sentencing requirements have produced deeply unfair outcomes for people of color. Even though drug use and sales are similar across all racial and ethnic groups, Black and Latino people are far more likely to be criminalized than white people. Releasing non-violent drug offense inmates, which comprise a good portion of the prison population, could help alleviate the overcrowding in prisons. There is no reason to have adults that could be contributing to our society incarcerated, especially given how expensive it is to keep them detained. Nearly three million children in the U.S. are growing up in households in which one or more parents are incarcerated; two thirds of those parents were charged with nonviolent offenses, like drug possession. (drugpolicy.org) As discussed in class, many times the non-violent criminals that end up going to prison come out more criminally-minded. Combine that with the limitations and restrictions that are placed on them in society and it’s a recipe for creating reoffenders. This becomes a vicious cycle that is near inescapable for minorities. Putting people in jail should not be treated as inconsequentially as it currently is; incarcerating someone can completely change their future and permanently close many doors of opportunity.

Lastly, laws regarding drugs need to be completely revised. The responsibility of scheduling drugs needs to be overseen by medical professionals and the scientific community; it’s astounding that politicians and bureaucrats have been in charge of this area for so long. This has lead to politicized drug wars and government propaganda used to sway the conversation and overshadow scientific research. It has fueled fear and misinformation in the public to this day creating pandemonium around a relatively safe drug. Minorities have particularly suffered as a disproportionate amount of them have been locked up because of drug charges. Under the premise of protecting citizens from a “heinous” drug, law makers were able to institutionalize racism by targeting minorities and abuse the legal system to oppress their opportunities. This practice has nearly decimated minority neighborhoods. Fortunately, a majority of Americans are now in favor of legalizing marijuana as research has shown many medical benefits of the drug; it has been proven to help lessen pain symptoms, reduce seizure episodes, and even effectively help treat cancer patients. Currently there are already ten states who have fully legalized recreational use of marijuana, and thirty-five states that have legal medical use (disa.org). If the trend of legalizing marijuana continues, it seems only right to release inmates serving sentences related to marijuana possession. This could help alleviate the overcrowding in prisons but also give individuals a chance to participate in society. Legalizing marijuana could also potentially reduce the dependency Americans have on addictive medications like opioids, which have become an epidemic killing thousands of Americans every year.

Any kind of change can be controversial, and there will always be individuals who disagree with new policies; but when it comes to the systemic oppression of minorities through politicized drug laws, it should no longer be a question. America prides itself on being diverse, but when a huge portion of that diverse population is incarcerated and oppressed, it stops being something we can pride ourselves on. A majority of Americans support the legalization of marijuana, which means the federal government has to catch up with the changing culture.

A Proposal for an Improved Justice System. (2019, Dec 26). Retrieved from https://papersowl.com/examples/a-proposal-for-an-improved-justice-system/